Sorry it's been a somewhat quiet Blue Tape And Pull Tab Awareness Week this year. Besides the cool "Babe Ruth TTM return" of my last post, I've hit a little patch of blogging malaise.

But let's check out some recently received cards from the cardsphere. 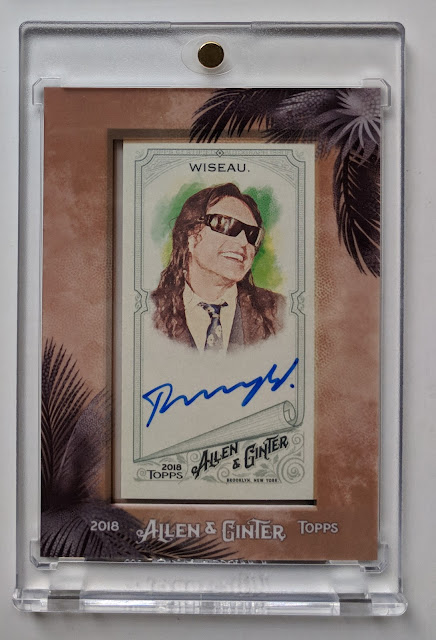 2018 A&G Tommy Wiseau auto! While I'm not one of those people who can quote The Room's screwy dialog much beyond the classic "Oh hai, Mark" and "You're tearing me apart!", I still got a kick out of the film and the film inspired by it, The Disaster Artist. So when I saw he was included in Ginter's auto checklist this year, I made a mental note to keep an eye out.

Then sure enough, Chris at Nachos Grande was lucky enough to pull the card from one of his boxes. We were able to work out a sale/trade where I sent him some money and a couple Barry Larkin cards I had set aside for him.

So yeah, neat pop culture addition to my non-sports collection.

Since it's Blue Tape And Pull Tab Awareness Week, let's look at how the card was shipped (and hope I don't piss anyone off by being critical). 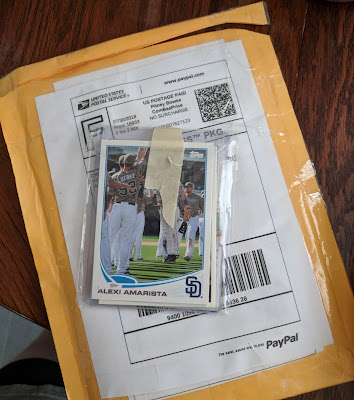 You can see he went with a used bubble mailer. (A recent Twitter question going around recently is "are you ok with being sent cards in used bubble mailers?" My answer is, yes, absolutely. I've personally never bought new bubble mailers in my life.) The Wiseau card was in a top loader, and in a team bag sandwiched with a few Padres commons as buffer cards. (Funny enough, I also used unwanted Padres cards for buffer cards for the Barry Larkin cards I sent him in a PWE.) Everything is looking good so far, but then he runs into trouble.

It appears the team bag was previously used as it's not very sticky anymore, so Chris put on a piece of tape to keep the cards from falling out. The first misstep was using tan masking tape instead of blue painters tape. Add to that the fact no pull tabs were made, and I'm afraid I have to give a good-natured finger-wagging to Chris here. Even though I have fingernails now (this time last year I was a chronic nailbiter), it still took me a moment or two longer than it should have to peel up the tape. And when I did, the tape stuck to the team bag and stretched it out, ruining the team bag. I already have more used team bags than I'll ever need, so it's not a big deal, but still hate to throw one away.

Overall, the card arrived safe and wasn't too much of a pain to get to. So yeah, if I were to grade this packaging job, I'd give Chris a B+. If he would have used blue tape with pull tabs, it'd be an easy A. (Even one or the other would have likely gotten him to A-.)

Thanks for working out the deal with me, Chris! I hope dissecting your mailing methods for educational purposes doesn't bother you. (Hey, he's a teacher, he can handle it.)

Next is a PWE from Jeremy at Topps Cards That Never Were. 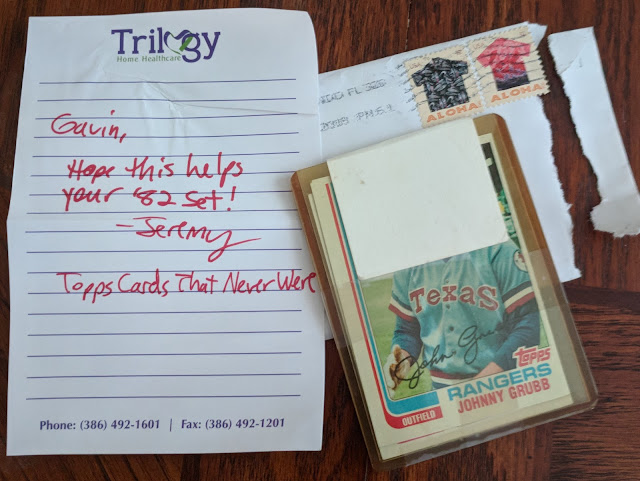 He fit 3 cards into 2 top-loaders, taped together. Ok class, what has Jeremy done wrong here?
That's right, off the bat you can tell he didn't use blue tape or make pull tabs. Those top-loaders are going straight into the trash, as there's no way I'm gonna try to chip off all that scotch tape. But give him credit for putting paper over the top loader openings so the cards won't get stuck on the tape. (And don't fool yourself thinking that isn't a real possibility: JBF once sent me a vintage card that got damaged that way.)

I'm gonna have to give Jeremy a B here. The cards arrived safe, but the packaging could have been better.

(I'm sorry if I'm sounding like an asshole in this post! I'm just trying to keep it real in respect to Blue Tape And Pull Tab Awareness Week. I'm totally cool with these packaging jobs and would not hesitate to trade with Chris and Jeremy again. Just trying to point out that there's room for improvement out there with how people mail cards.)

Anyways, let's get to the cards he sent:

Nice! Three set needs for my 1982 Topps build, including a pair of HOFers.

I'm in the middle of collating my set, now that I'm down to just a few cards remaining. While it's down to just 6, unfortunately I think I might have to add to my wantlist because I'm finding a few cards in there that are beat-up enough to where I'd want to upgrade them.

Not these 3 from Jeremy, though, these are great. Thanks, man! I'll round up a return for you shortly!

Last for today is a PWE from Matt at Sport Card Collectors shooting me a little bonus to make up for the mixup in our last trade.

Matt didn't use tape on the cards, rather went the method of using a cut 3-pocket from a 9-pocket page. That seems to work fine, though I'd get nervous doing that for valuable cards, as it's not exactly the most secure way to ship. I at least like to wrap the pocket in a piece of paper or thin cardboard. (Writing "DO NOT BEND" on the envelope probably doesn't do much.) But I'll give it a B+.

A couple Treas and a green Renfroe. 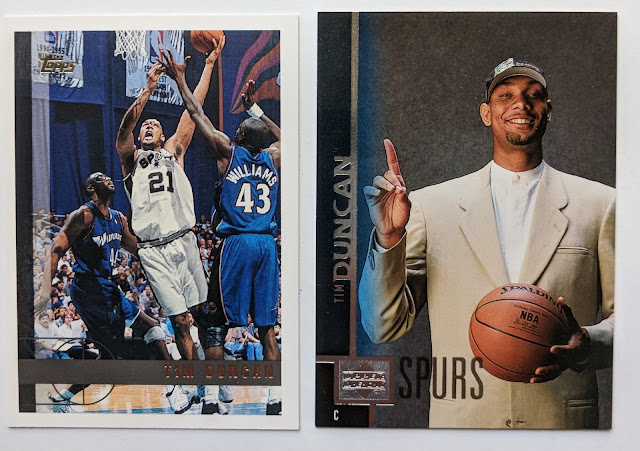 And a couple Tim Duncan rookie cards I needed for the PC. Awesome.. thanks, Matt!

Have a great weekend, everybody.
Posted by defgav at 3:56 PM