From Portland to Portsmouth: My first trip out East

This past weekend I took a nice little vacation to Portsmouth, New Hampshire with my wife and her family. My wife has an aunt and cousin out there, so it was a family get-together. It was my first time ever visiting the east coast (assuming you count Florida as the south, as I've been to America's wang a few times). It was a lot of fun. This post will show off some pictures from my trip, with some wallet card photos to keep us roughly on topic. 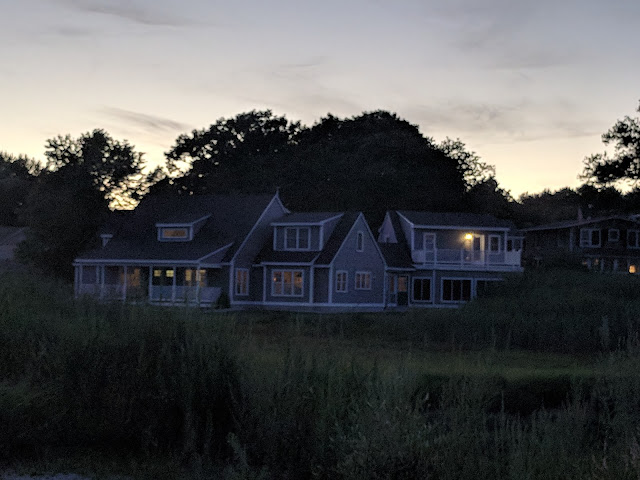 Here's a dusk shot of the incredible house we rented. All 3 sections.. It was huge! My wife found a great Airbnb deal on it. 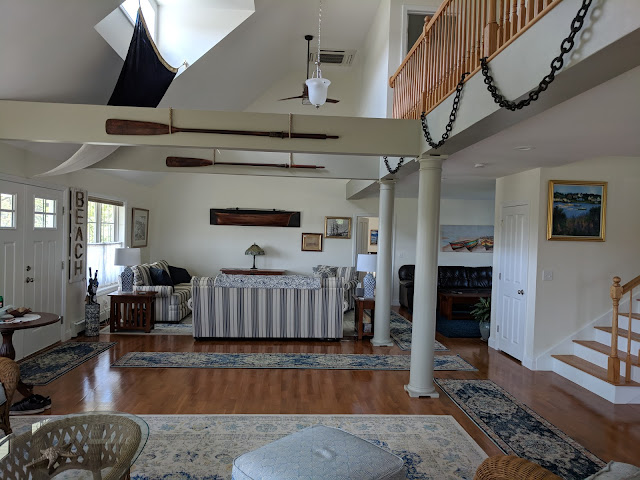 Here's an interior pic of the living room area. 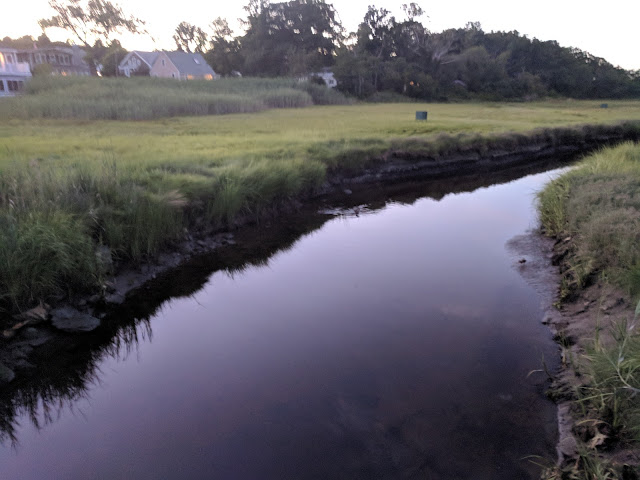 Great little neighborhood. I think the city was technically Rye, just outside of Portsmouth. 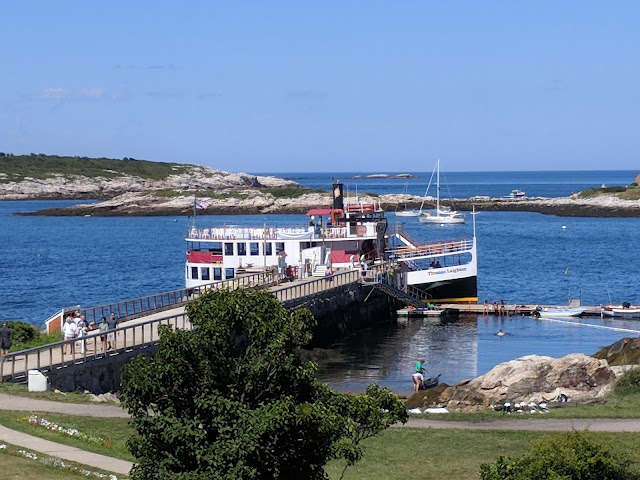 The weather was great on Friday, our first full day in town. We took a little cruise tour in the Bay of Maine to the Isles of Shoals (a group of small islands and tidal ledges situated approximately 6 miles off the east coast of the United States, straddling the border of the states of Maine and New Hampshire). Once we arrived to our island port, we each got an ice cream cone (which we pretty much all agreed was the best we'd ever had) and played some frisbee. 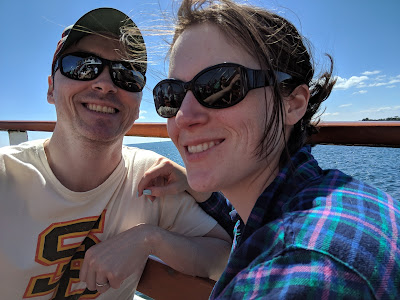 I was a little hesitant to go on the cruise at first, since the last time I was on a boat I got seasick pretty bad, but this little voyage was totally fine. Smooth sailing. 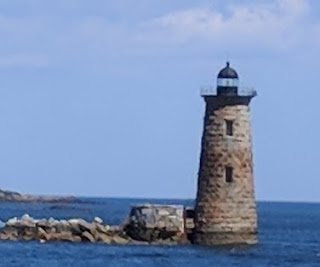 Old lighthouses are always cool to see. The tour guide had plenty of reasonably interesting stories about the area. 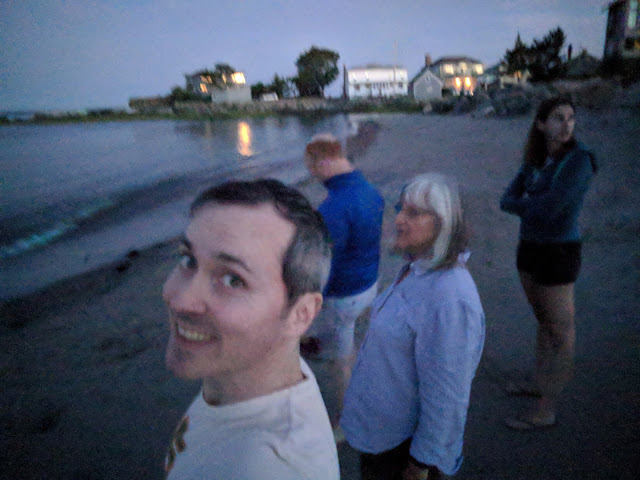 Then later Friday evening, it was time to hit the shore. It was just a short walk down to the beach from the house. 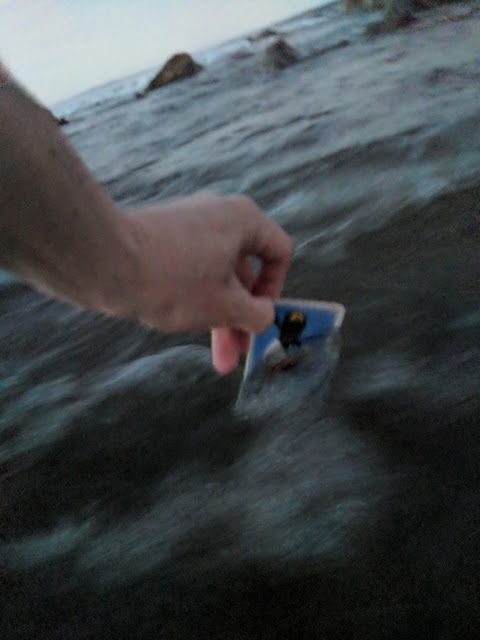 One silly little thing that I was super excited about is I achieved my dream of having my wallet card dipped in both the Pacific and the Atlantic oceans (the westmost of which was checked off back in May). While I like the "arty" feel, this isn't a great photo, with the sun freshly tucked in for the night, but I would give 'er a re-do later in the weekend (to follow below). 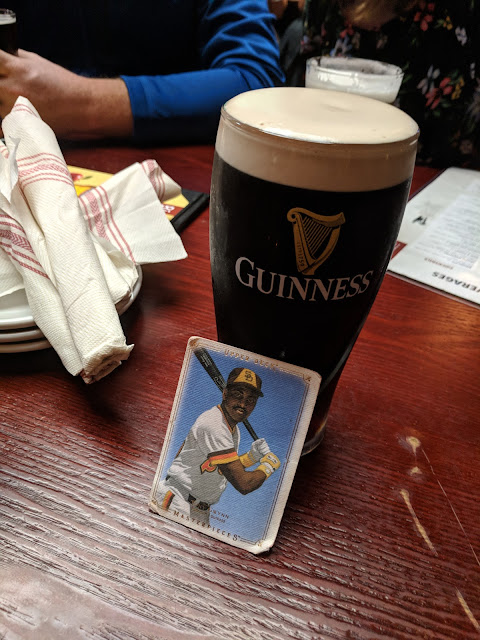 Saturday, we trekked into downtown Portsmouth-- "we" being my wife and I and her brother and his wife (the "kids" of the group). We grabbed lunch at an Irish pub and I went for the authentic experience and got a Guinness. (Of course, with the time change, I was all turned around. Basically felt like having beer for breakfast. But hey, I was on vacation, so anything goes.) 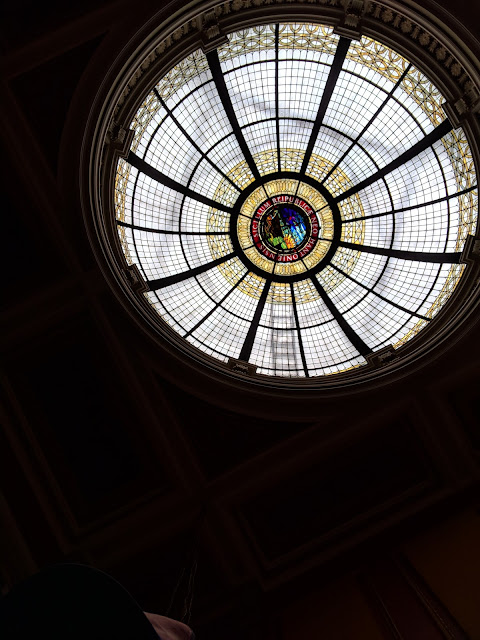 The pub was in a place that used to be a bank long ago. Beautiful old building. Really cool glass window on the roof. 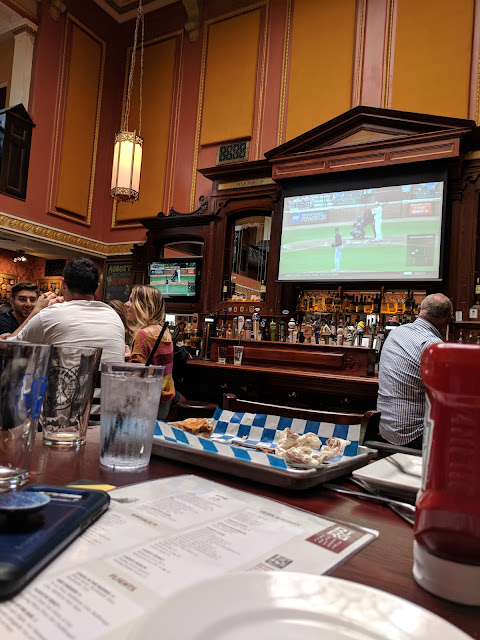 Happy to catch a few innings of a Red Sox game in New England, as they've always been a "second tier" favorite team of mine, I guess. (David Price struck out a season-high 10 batters as Boston beat Baltimore.) Definitely saw a ton of Sox and Patriots gear during my stay. 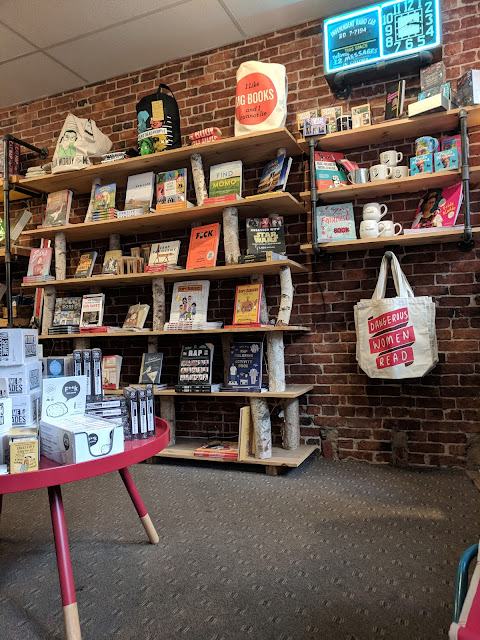 Then we walked around downtown and checked out some touristy shops. We preferred the shops with silly nicknacks and gags (the only thing I bought was a jaw harp), and everybody also really liked a kitchen gadget shop that had wine tasting and cheese samples. Oh, and the real star of the trip was Port City Pretzels.. man, those are some excellent snacks. Brought home a couple bags: one for us, and one to share with my co-workers. 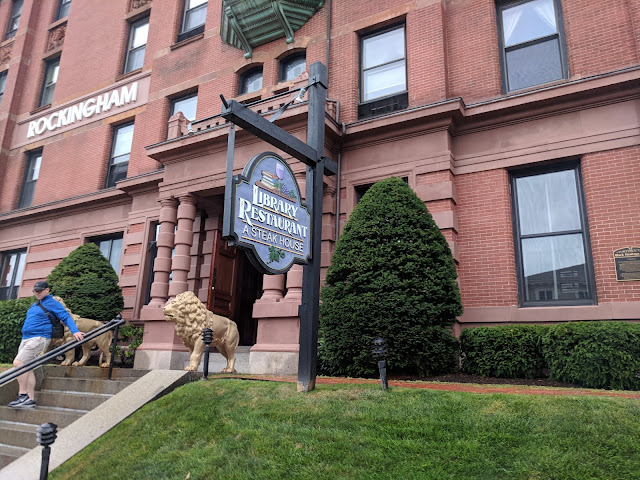 Before heading back to home base, we grabbed a cocktail at a restaurant that used to be an old library. Another neat building. I ordered a Hot Almond Joy and it was very enjoyable on a cool, misty day. 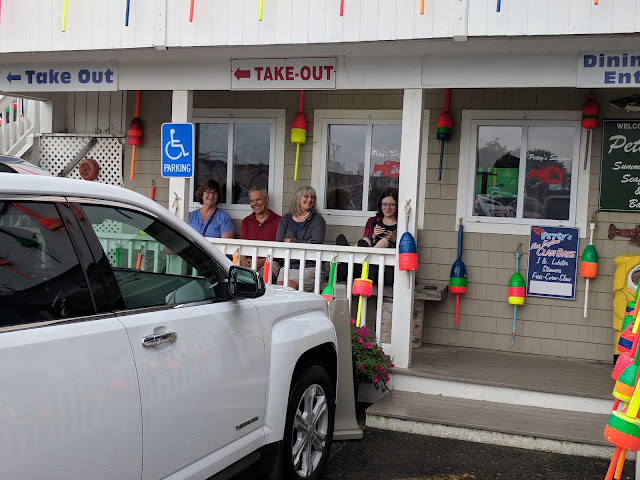 Saturday's dinner was at a cool local place called Petey's. I think I got the potato skins and a beer. (Lots of eating and drinking, as with most vacations. Time for a diet.) 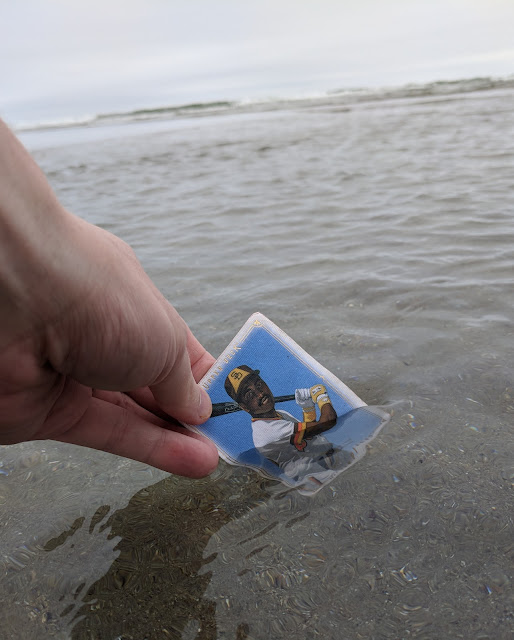 Ah, here's a clearer wallet card photo of Tony bathing in the Atlantic. Sunday afternoon we headed back to the beach. Unfortunately the weather was overcast and a little drizzly, putting the kibosh on our tentative plans to do something like kayaking or boogie boarding, but still had a nice walk down the beach. 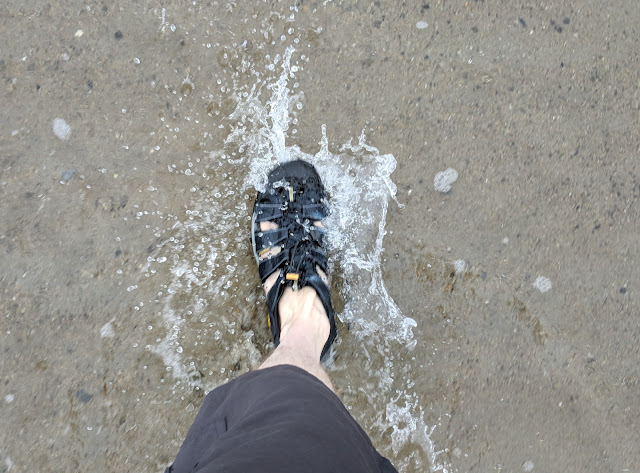 I had ponied up for a new pair of Keen's for the trip so I'd have some good amphibious footwear. (Haven't bought shoes this expensive since I was a teenager buying new Nikes in a vain attempt to be cool.) I hope to get many years of use out of these on my occasional trips to the beach and river. 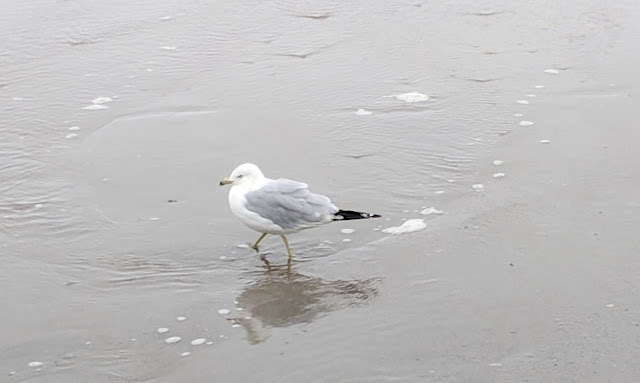 I dug this particular seagull. Reminded me of Walt "No Neck" Williams. 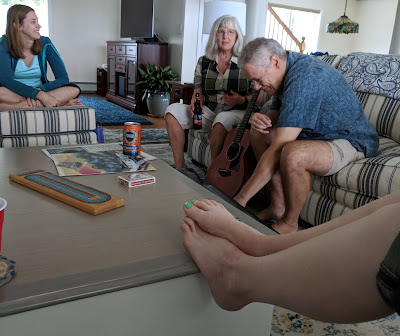 Then we returned to the house and had a "hootenanny" jam (I didn't take any pictures until we were wrapping up). Steph (guitar) and Ted (violin) are legit musicians who get paying gigs to perform bluegrass, so I was out of my element, and may have slightly embarrassed myself trying to keep up with them, but had a lot of fun regardless. Ted plays a mean fiddle, and he and Steph sound great singing together. They lent me an acoustic guitar and I did my best to join in. The set consisted mostly of bluegrass standards I wasn't familiar with, plus other stuff like Ringo's "Don't Pass Me By", and I dusted off a couple originals which was nice as it's been a few years since I really played music with anybody. 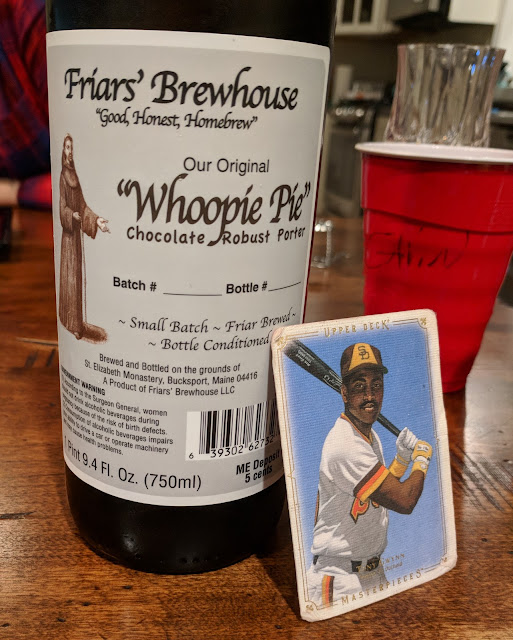 Then Sunday night was a birthday party/dinner for my cousin-in-law. Great food and good times. As with the other nights of the vacation, much beer and wine was consumed late into the night (well, late Eastern time, at least.) My wife and I split this Whoopie Pie porter. Good stuff. This microbrewery is called Friar's Brewhouse, so good enough excuse to take one last wallet card photo with Mr. Padre. 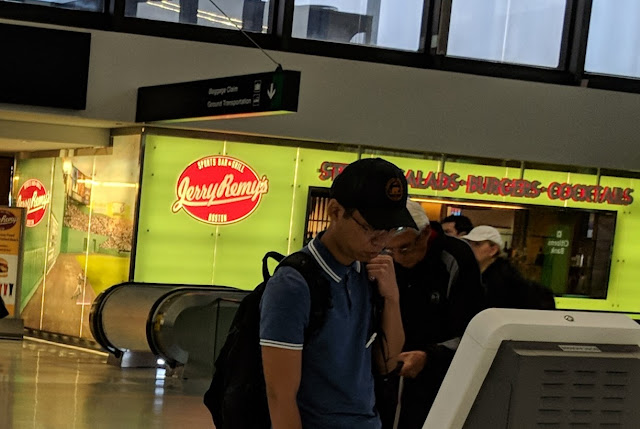 Squeezing in a little more baseball content, Boston's Logan International Airport has a chain of Jerry Remy's bar & grills. Remy is a former Red Sock and beloved local broadcaster. We grabbed a Sam Adams while waiting for our flight home. 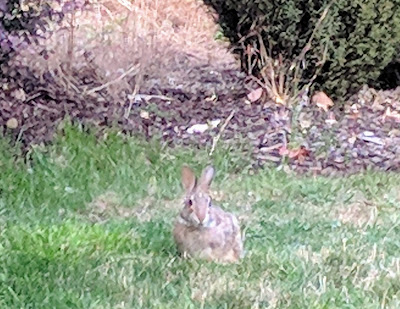 A neighborhood bunny welcomed me back home Monday evening. Our dog Annie was pretty happy to be reunited with us too. Great trip all around. We took Tuesday off as a buffer day, then back to work here on Wednesday.

That's it. Thanks for reading! Back to cards next time.. a bunch of neat stuff to show off.
Posted by defgav at 3:31 PM