Scattershot Thru the Heart (trades, tweets, and tribulations)

I'm just going to throw some quick stuff together in this post, including a couple trade recaps, but first let's start with the gif cards I've made recently.

9/19:
Happy Birthday to one of baseball's all-time most inspirational players, Jim Abbott. 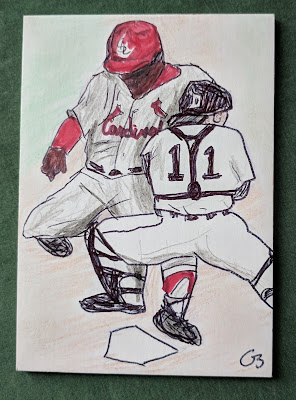 Here's a sketchcard I made to throw in with my return package to Julie for the latest batch of cards she sent me. It's from the '68 World Series play at the plate with Bill Freehan blocking Lou Brock. Didn't turn out too bad by my standards! 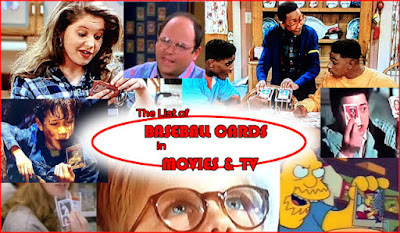 The List of Baseball Cards in Movies and TV got a good amount of attention over Friday and Saturday, and I ended up adding/updating about 20 entries over the weekend. Thanks again to everyone for the response and tips! It's looking pretty good now, though still a work in progress. 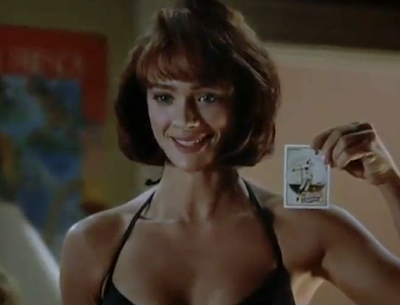 Speaking of looking pretty good, how about Lauren Holly in a bikini showing off an Upper Deck Ted Williams card in a 1993 episode of Picket Fences?

Which brings me to the next thing I wanted to mention. Brian at Collecting Cutch whipped out the big guns last October for his monthlong celebration of curvaceous women and raising breast cancer awareness. I ended up winning a sweet Pete Rose auto from last year's festivities, and Brian is back with a couple new contests for this go-round. Visit his post here to get in on the action. I recently swung a quick trade on Twitter with Heavy J (@HeavyJ28) who was able to take my '85 Donruss needs down to a single card remaining: Lee Smith (which is now atop my Desperate Dozen: can anybody be a set-killing hero for me?). This lot includes four cards from back when painted baseball cards didn't cost $7.99 each (yes, that was a dig at Topps' Living Set, which I dismiss as overpriced Diamond Kings), four HOFer base cards, the inspirational Dave Dravecky, and a couple young Yanks who went onto respectable MLB careers.

A small part of my recent "Twitter tribulations" I mentioned last post, even though he stuck a pair of Forever stamps on it, Jason's envelope arrived postage due $2.50. His mistake was he stacked all the cards together in one team bag, so the envelope was over 1/4" thick, meaning it got counted as package rate, no longer the cheaper letter rate. He was totally apologetic and quickly reimbursed me thru PayPal, so I only mention it here as a heads-up: Remember if you're sending several cards in an envelope, spread them out in 2 or 3 smaller stacks to keep it under a quarter of an inch thick.

I've actually got a big "how to" draft that's gathering dust about sending cards safely and cheaply that I should get around to finishing and posting one of these days. I think it's got some handy tips.

Next up is a surprise PWE from Bru over at Remember the Astrodome. 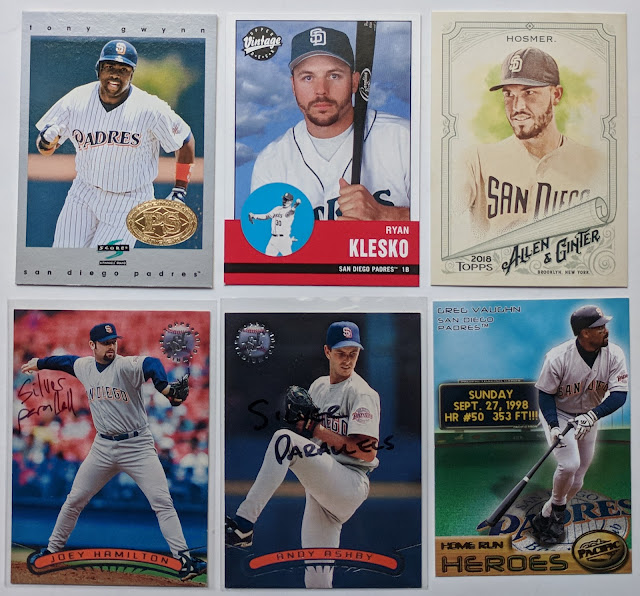 An assortment of Padres. Love the Gwynn parallel. 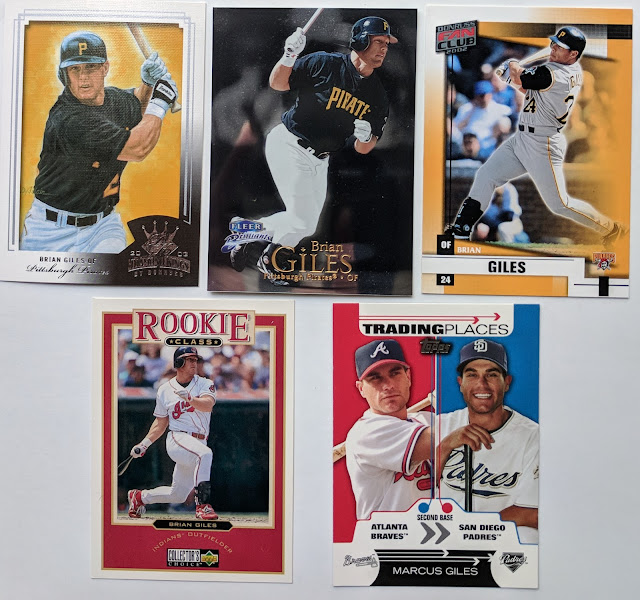 Miles of Giles. I wasn't familiar with 1999 Fleer Brilliants (in the center here), but it's pretty cool. It's on chrome stock and has a classy, minimal design. Reminds me a little of old school Topps Gold Label (not the foilboard reboot). Looks like it only lasted one year, but also had basketball and football counterparts. If boxes weren't so expensive, I'd be tempted to rip some of this. 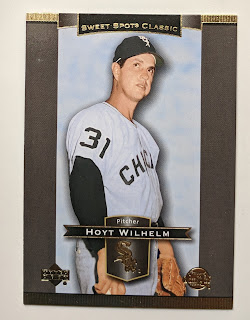 And finally.. always great to get a Hoyt I didn't have.

Thanks, Bru! I'm dropping a return to you in the mail today. Now next time print me out one of your '68 Nate Colbert customs!

Ok, one more thing for this post, falling under the "tribulations" grouping.

I thought about making this a separate post titled "Ghosted" but I'll just tack it onto the end of this here post instead.

Earlier this month I got an email from a guy named Adam P. who said he was pointed my direction by Larry P. (no relation, lol), whom I've traded with a few times. He was looking for Reds autos (or autos of guys who played for the Reds at one time) and any Barry Larkin cards he needed. I had some stuff that fit his wants and was very agreeable to working out a deal.

Adam proved himself to be one of those thoughtful traders who spends quality time looking through your wantlist, finding what you need and not wasting your time with what you've already got. He sent me an email listing what he had for me that really made me anxious for our trade to go down:

So here is what I have for you:

There are cards for players from every level of priority on your want list. From highest to you are complete and only want stuff I know you won’t have. That was the case with Reggie. I checked and you don’t have any of the cards I am sending. Some are pretty cool oddballs. For every player you have a link for I check as to not send duplicates. For the ones that didn’t have a link, I can’t guarantee anything lol.  But you could always send back cards you really don’t want.
Hopefully you are able to find something in other teams, but if not you could just even it out the best you see.
I think if I counted correctly it’s 474 cards for you

So this looks awesome to me. I had already given him my address before this and he said he'd send me everything he had for me and that I could just send him back whatever I thought was fair. So I scoured through my various non-PC autos looking for Reds and guys who played for the Reds at one time (didn't have to be in Reds uniform, he was just looking for an all-time autograph project) and I built up a decent stack for him.

I emailed back with a "do you need these guys? ..." message and then a couple days later figured it'd be better to ask him to just send me the list of the guys he doesn't need.

But the sad thing is I haven't heard from him since that email where he listed all the stuff for me, which was nearly 3 weeks ago. I tried contacting him again last week: "Hey Adam, haven't heard from you in a while. Having second thoughts about this trade? We could start with a smaller trade if you like. I've got some good stuff set aside for you. That'd be a bummer if our deal fell through, but no worries. Please just let me know."

Still silence, and that's where we stand now.

So yeah, that's a bummer. I didn't send him anything yet, so it's not like he ripped me off... just gave me the cardboard equivalent of blue balls, I guess. (I'm dying to know what the Rod Beck card was, damn it! lol.) I've had trade negotiations fall apart before-- sometimes my fault, sometimes the other guy's fault-- but not like this. Seemed like we were on the same page and then it just suddenly derailed. The guy went through the trouble of specially picking out a stack of 474 cards for me. I know if I spent that kind of time and effort on a tentative trade, I damn well wouldn't let it go to waste without a fight, much less disappearing without a word.

I can only assume "life stuff" happened and rendered pictures of sports men on cardboard rectangles unimportant. Who knows. Maybe I'll eventually hear from him again, maybe not. Sucks to get ghosted like that. Unless some "life turned upside-down" level shit went down, I think a courtesy reply to my checking-in email is reasonable, right?


(And I've got a somewhat similar story to this one for another day-- the main "Twitter tribulation" that had me frustrated recently-- but looks like that one may have a happy ending after all. Stay tuned.)

Anyways, thanks for reading!
Posted by defgav at 3:09 PM