2016 Topps Preview from the Parallel Universe

[This is a recurring feature where we take a trip into the Parallel Universe to check out silly, fake highlights from a new set.]

It's that time of year again! 2016 Topps Series 1 officially releases tomorrow, 2/3, though some lucky collectors have been finding it pop up on retail shelves already. Once again, Topps brings out the big guns with exciting inserts and subsets to chase. Let's take a look some of these cards now!

One insert set that was a big hit last year were the First Pitch cards featuring celebrities and other notable folks who got to throw out the first pitch of a ballgame.

Collectors will be pleased to see this insert set return in 2016. 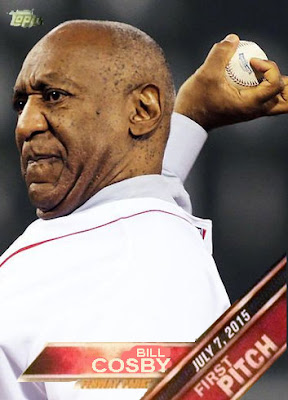 
Another stalwart of Topps cards are team and combo cards, highlighting standout groups of players. 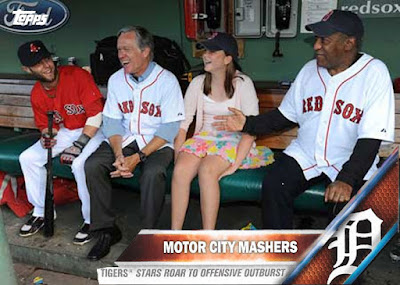 Hey, that doesn't even make any sense! Entirely inappropriate. Something is terribly wrong here.


Let's put that behind us and check out a brand new insert this year. It's called Pressed Into Service and features players who took one for the team by playing out of position in a pinch.
I'm excited for this one! 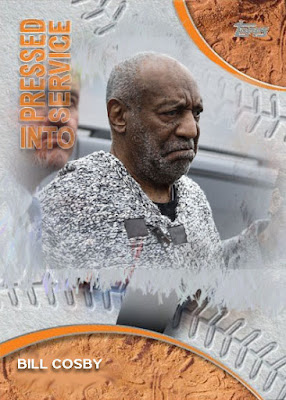 The hell?!! Topps has really made some curious decisions with this year's product! I can't see this card being very collectable at all.


Another special insert set for 2016 celebrates the 100th anniversary of Wrigley Field in Chicago. It's a legendary site for baseball, and regardless of your team affiliation, you've got to admire and cherish all Wrigley has brought to the game over the years. 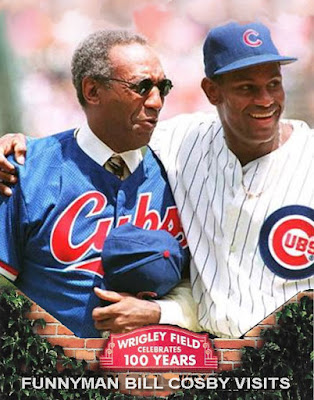 The incredible thing is these are just 4 of the 27 different cards in 2016 Topps Series 1 that feature Bill Cosby in some capacity. Personally, I think this is a huge misstep for Topps, and shows the company is woefully out of touch with today's consumers. Will the gambit pay off? Only time will tell.

Thanks for joining us. We'll see you next time.. here in... The Parallel Universe!!
Posted by defgav at 1:52 PM