I love Ghostbusters. The 1984 original was my favorite movie for years as a kid, and I was a loyal watcher of the Real Ghostbusters cartoon and owned much of the toy line.. I even had the big headquarters playset which was my prized possession for a time in elementary school.

So I was interested when Ghostbusters got a modern card release in 2016 from Cryptozoic. I was hoping to score a discounted box that year when Black Friday rolled around.. but the supply seemed to have run dry. I also kept an eye out in 2017, but again couldn't find boxes for a good price.

But then finally this past Black Friday, boxes finally popped up for a solid sale price. I added a box to my Christmas list and hoped for the best.

Turns out my mother-in-law kindly ordered a box for me. A few days later, she got a notification that it had been delivered, and was concerned to find there was no package waiting. Assuming it was stolen off her doorstep, she begrudgingly ordered another box (I gotta assume the Black Friday deal was over by then), this second one sent to her work address for safety. And then a couple days later, the original order finally showed up. Rather than go through the trouble of returning one, she went ahead and gave me both boxes for Christmas. Sucks she had to go through that.. extra money and extra stress.. but hey, I was very happy to end up with double the boxes! Her and my wife were like, "Sorry you got the same thing twice." But of course this just means I have twice the chance of pulling something special, so no apologies necessary!

I already completed the 19-card autograph set early last year via the secondary market-- one of my big collecting accomplishments of 2018-- so I'm not really chasing autos now (though I know there are some auto variations [inscriptions] still for me to hope for). My interest in ripping packs is to try building the base set and the inserts, plus take a shot at pulling something cool like a sketch card or an animation cel, or maybe a manufactured slime relic card. Hits aren't guaranteed per-box, though the 3 main hits (autos, sketches, cels) each have odds of 1:36 (there are 24 packs in a box). I'm not great at math, but I think that means each box probably has a couple hits. All I have from this product going into the break are the autos plus a couple animation cel cards. 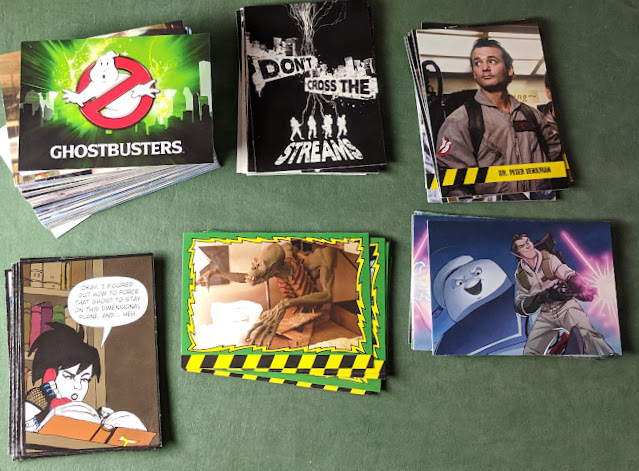 Ok, both boxes each provided me with a complete base set (54 cards) and complete (non-hit) insert sets. That means I have an extra set to trade, if anyone's interested. 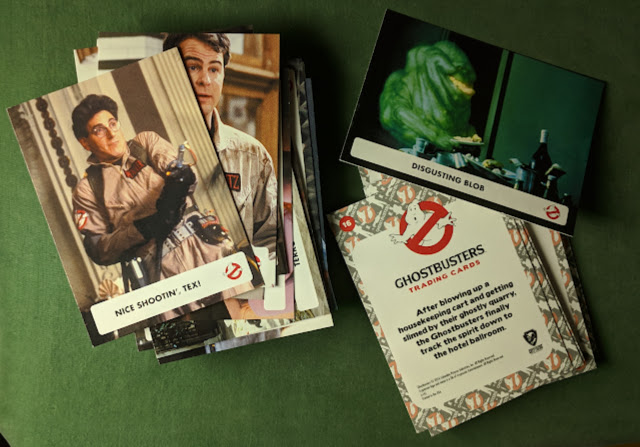 The base set is nice enough. It just basically runs through the first movie chronologically over the course of 54 cards. To nitpick, there are some moments that probably didn't deserve a card ("Back to the Lab") and others that I feel should have been included but weren't (howabout "I Feel So Funky" from when Venkman gets slimed? That would have been a cool card.) My favorite of the insert sets is the Quotes. Some cool images here. A couple of these pictures have been in my screensaver slideshow folder for years now, so it's nice to own the actual cards finally. 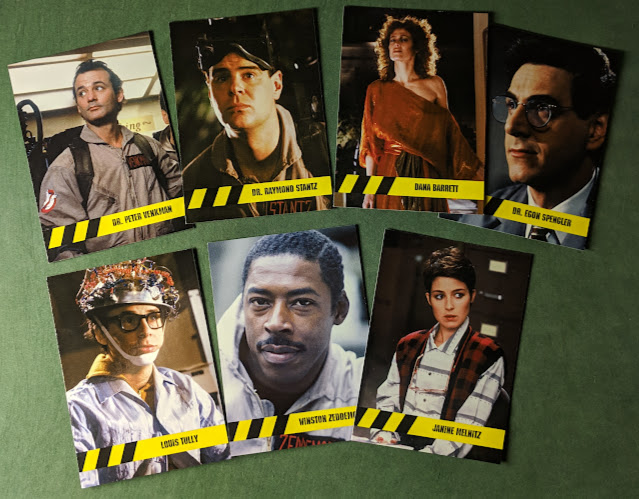 The Character Bios insert set is the only one that's not technically complete. Seven cards were included, but there are 2 additional cards which were promo-only, not available in boxes. The Gozer promo card is hard to find, though the other promo, Mr. Stay Puft, can be scored online easily enough. I suppose I'll try to add them at some point to satisfy the completist in me. Here's a cool puzzle that one of the insert sets creates. You've got to give Cryptozoic a lot of credit for giving consideration to collectors when putting this set together. You may have noticed that all the insert sets are 9 cards deep. And the base set is 54 cards (9 x 6). So it's perfect for paging. Wish Topps and Panini would be that considerate. It's not that hard to do! 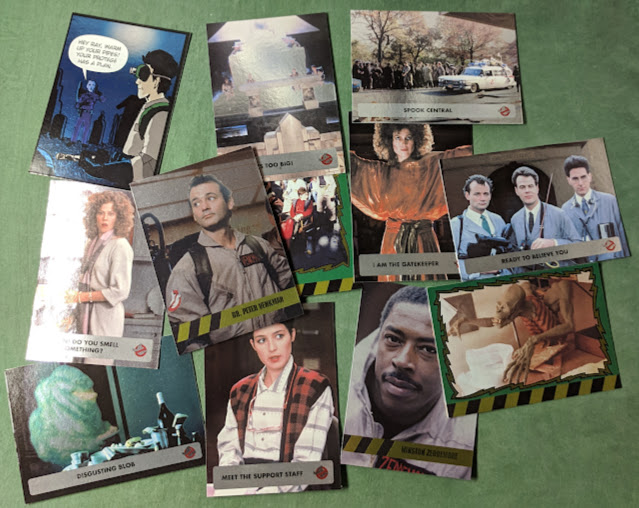 There are "Silver Foil" parallels for all base cards and non-hit insert cards. I pulled 6 from each box. These are fine, but don't do much for me. If anyone is crazy enough to be working on a foil parallel set for this product, I could probably be talked out of these. John Rothman is probably one of the most common autos, so not a great pull there, but still nice to get an autograph. He had a small part in the first Ghostbusters film in the library scene, and has had minor roles in some other memorable stuff like the great Tom Hanks movie Big, the holiday classic Jingle All the Way, and one of my all-time favorite tv shows, Arrested Development.

Very happy to pull an animation cel, especially of a main character. Seems to be Peter in an unpleasant situation. Not sure what's going on there, but I'll try to keep an eye out for this scene as I watch thru The Real Ghostbusters on Netflix.

The sketchcard.. well, I was glad to pull one. But this kinda confused me. Obviously some demon-like thing, but doesn't look familiar or seem to fit in the Ghostbusters universe. Looks more like something out of a horror movie. Creeps me out a little, honestly, and I'd be willing to trade it to someone who might enjoy it more than I. It's by artist Sean Moore.

The manipatch is kinda cool. I think those are a tough pull, so it's a decent hit, though not terribly exciting. 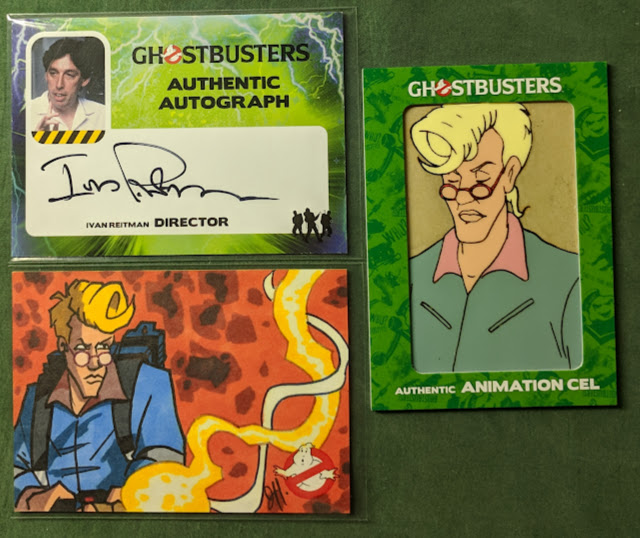 The animation cel is a good one, too.. a nice shot of Egon in contemplation.

Egon hot box! as he's the star of the sketchcard too. Now this is more like the sketch I hoped to pull from these boxes! It was eerily familiar to me. A year ago, I made a very similar sketch card... That's mine on the bottom. I suspect that artist Joe Hogan and I were looking at the same source image. So that's kind of amazing to get a sketch card so similar to one I made. What are the chances?! The official one is clearly superior artistically, but hey, mine has glitter and glows in the dark!

So while Box 1 had the bonus patch hit, Box 2 had a better auto and better (in my opinion) sketch. Looks like Cryptozoic was doing the "under-promise, over-deliver" thing with their odds, as I pulled an auto, sketch, and cel from each box. Do all boxes typically have all 3 hits? Maybe I just got really lucky beating the odds.

Anyways, that was fun. Even better than I was expecting. Thanks again to my wonderful mother-in-law for the gift. I would still someday like to add the 2 promo Character cards and a slime relic card, but otherwise I feel my Ghostbusters collection can be called good as far as this product goes.

Again, I have an extra base set + inserts available for trade. The 2 autos I pulled are also up for grabs for the right offer, as well as the creepy sketch. Just get in touch if you'd like to work something out.

One more thing before we close up here. I recently added another "bonus" card to my already-completed Ghostbusters autograph set. It's an auto of "New Janine" from The Real Ghostbusters. Kath Soucie wasn't included in the original set, so I made my own using a different certified auto. About halfway through the show's run, the producers decided to "soften" the character of Janine.


In the third season, some of the character designs were modified. Ray's character design was slimmed down to give the character a less overweight appearance and Slimer was given a tail instead of the formerly rounded bottom and which was reverted to a stub in season 6. The biggest change was to the character of Janine, whose hair was completely changed from being short and spiky to long and straight. Her overall design was softened, as was her personality. Her voice was also softened with Kath Soucie taking over the voice role from Laura Summer. ABC also went back, and redubbed Peter and Janine's dialogue in several episodes of the show with Dave Coulier and Kath Soucie respectively. Changes to Janine's character were eventually addressed (and resolved) in the season 6 episode (#118) entitled, "Janine, You've Changed". [wiki] 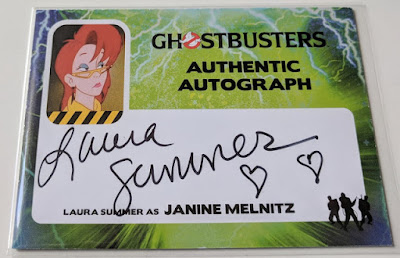 For comparison, here's the "Original Janine" auto. Notice the pointy glasses and spiky hair, contrasted with the round glasses and flowing hair of New Janine. 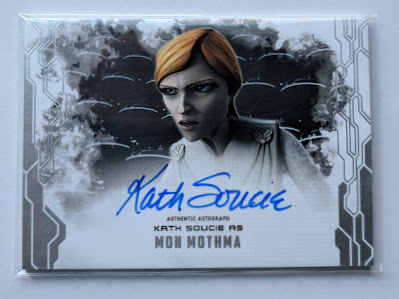 Kath Soucie is a prolific voice actress who has worked on Captain Planet, Space Jam, Tiny Toon Adventures, Dexter's Laboratory, and Rugrats, to name a few projects. She's also been various voices in a few Star Wars animated shows and video games. I picked up this 2017 Topps Star Wars Masterwork auto for $4.24 in my latest COMC order, and it provides a great source for a custom overlay. 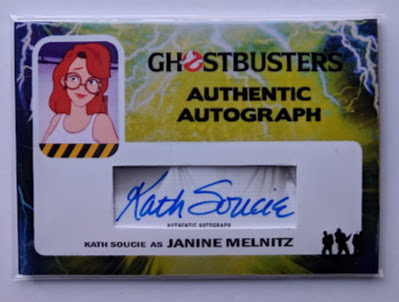 Love growing my Ghostbusters autograph collection and will continue trying to hunt down more names to add.

Thanks for reading!
Posted by defgav at 3:51 PM