Will our blogs outlive us?

I heard about how recently MySpace ended up losing all the old music artists had uploaded to the site back in its heyday. They said it was a server migration error or something, but rumors are they just wanted to free up the space all those files were taking up. It was a bummer for me since I had a couple artist profiles there: my main "band" page, and a secret alter-ego rap/hip-hop joke project. There was also a page for a little wannabe "record label" I started with some online musician friends back then. I know MySpace is essentially dead and those songs probably only got like maybe 1 or 2 real human listens per year, but it was still nice to know they were out there.

And of course when something like this happens, as a blogger you can't help but to think about Blogger (and/or WordPress) and how quickly our blogs and their archives could be wiped away forever, either on purpose or accident. That would suck. Hell, I frequently use my own blog as a resource.. looking up when/how I got a certain card.. what I need.. what I have... stuff like that. And our blogs are basically journals of our collection (sometimes branching out into real life stuff too), and it's nice to think they'll be around a long time, perhaps even tell our stories after we're gone.


Anyways, something to ponder, but that was basically just a click-bait intro to trick you into checking out some new 2005 Topps Retired auto pickups of mine... 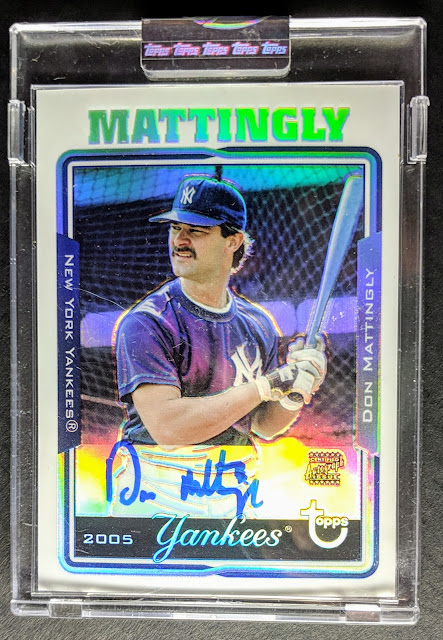 This Don Mattingly refractor has a story behind it. When I opened up the package from the seller, there was a David Ortiz stickergraph/relic instead. The seller was apologetic and cool about correcting the mixup. Thankfully the guy who accidentally got the Mattingly was cool about returning it. Chances are he was a Red Sox fan, so the Donnie Baseball probably grossed him out. But it all worked out and the correct cards made it to the correct people. 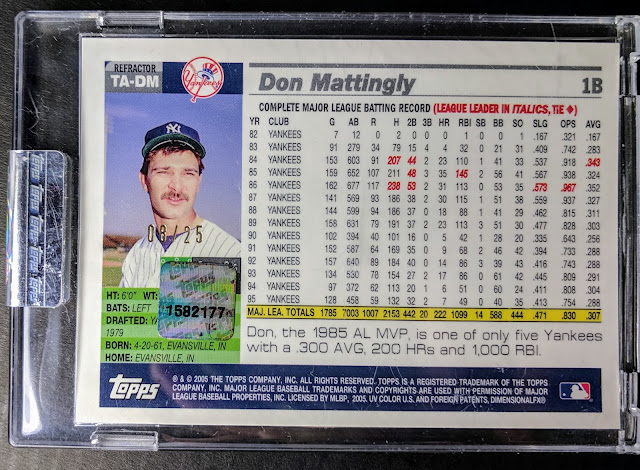 I had to look it up, but seems Mattingly is still currently the manager for the Miami Marlins. It's a living. 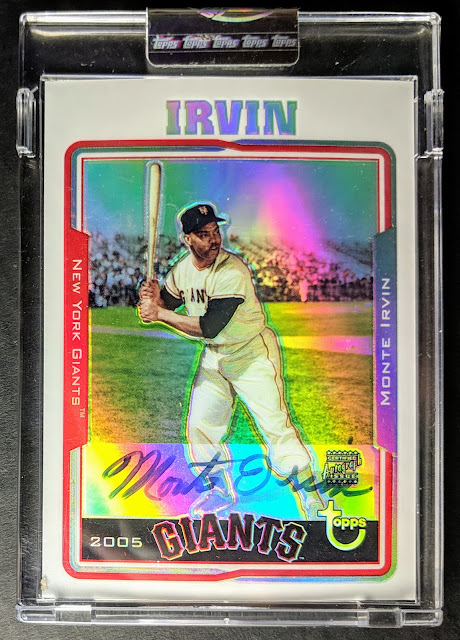 Hall of Famer Monte Irvin was a fun one to get. There's a little story behind this pickup, too. When this card originally popped up on eBay, I made a reasonable best offer that was declined. A month or so later, the seller came back with his tail between his legs asking if he could have a do-over and accept my old offer. I took my time.. even considered making a slightly lower offer than before.. but ultimately took the high road and went ahead and re-submitted the same offer. 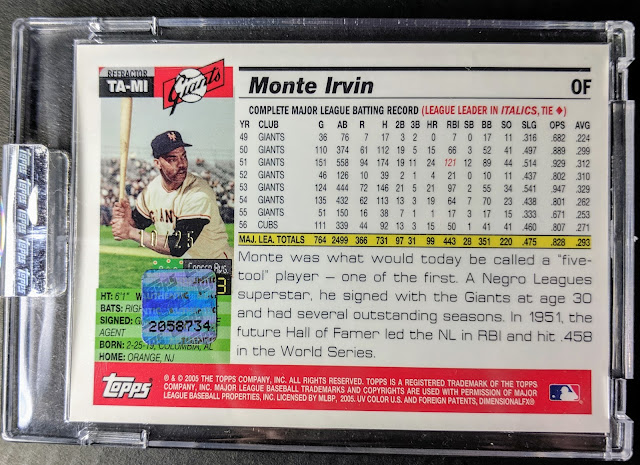 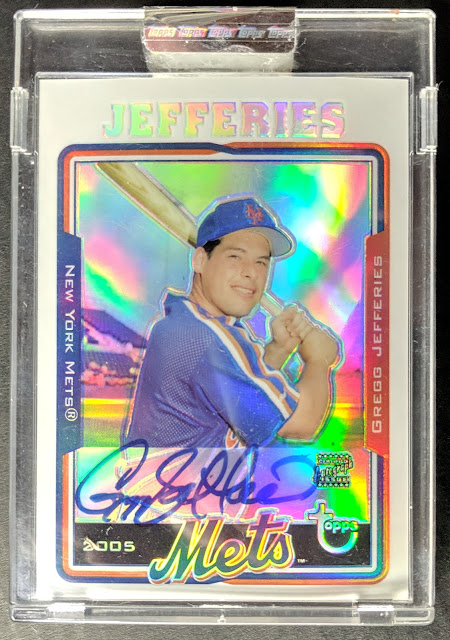 This Gregg Jefferies refractor had been sitting on eBay for a while, and I finally pulled the trigger on it with the help from a discount code. Great looking card. Seems even extra shiny. 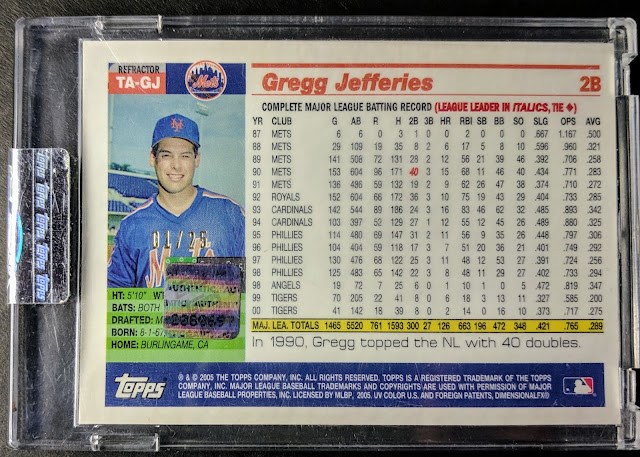 Casual baseball fans who hoarded hot rookie cards in the late 80s/early 90s often consider Gregg Jefferies one of the game's biggest busts due to how crazy-hyped he was around 1988/89. And while he didn't live up to his "future all-time great" promise, looking at his numbers, he still had a very fine career that pretty much any ballplayer working their way up would kill to have. 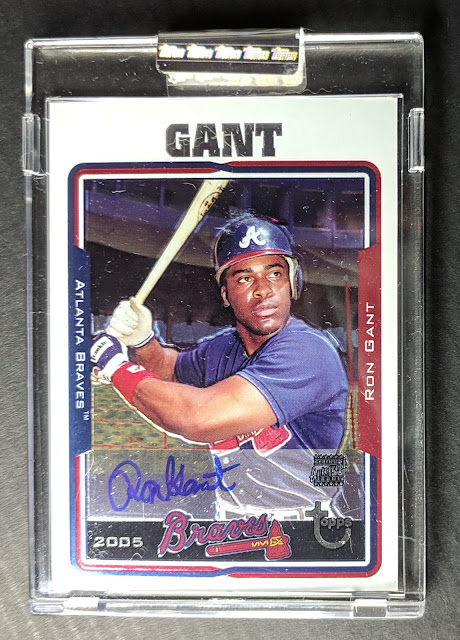 Here's a base auto, not a refractor, as you can probably tell by lack of rainbow shine, but still happy to snag this Ron Gant, a favorite player of mine since I first got into baseball back in 1990. 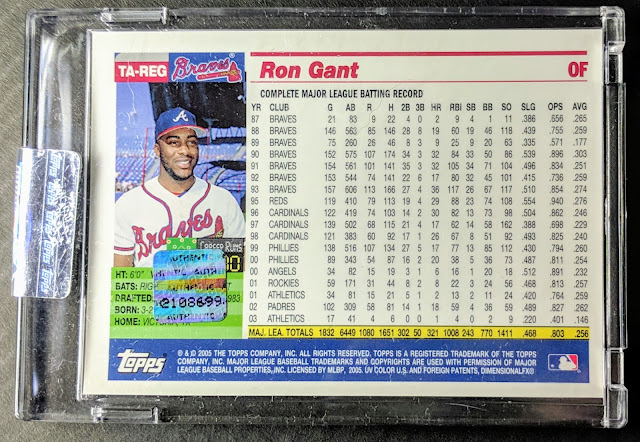 Like Jefferies, not quite a HOF career, but still some impressive numbers on the back of his card.


That wraps up this batch of 2005 Topps Retired autos.
Have a great weekend!
Posted by defgav at 4:17 PM