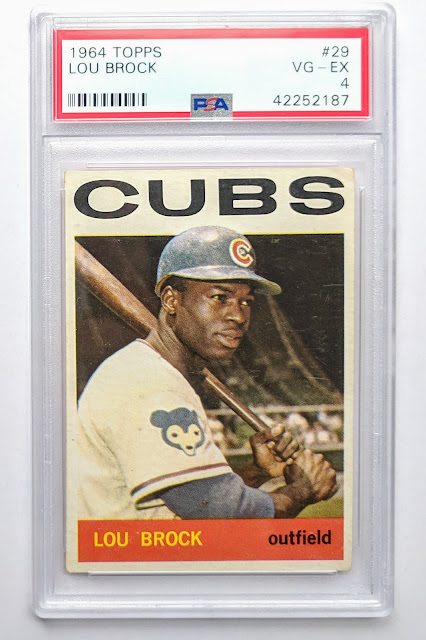 The great Lou Brock here was a nice one to knock off my slow-going 1964 Topps setbuild recently. Its PSA 4 grade ties for my highest in the set with Hank Aaron and Pete Rose (the only other graded card in my set is a 1.5 Koufax). The Brock is well centered and has a clean front, looking to be in pretty good shape for only being graded 4 out of 10. 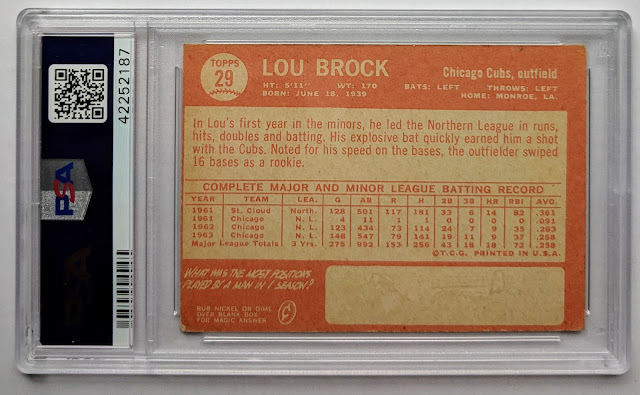 The back isn't terrible, but somewhat justifies the score by being noticeably off-center to the left and having a dinged bottom left corner (that I feel could be improved by grazing the paper to the outside with your fingernail a little, but I guess that's on the person who submitted it for grading for not employing that age-old trick).
Anyways, this is Lou's last Topps card as a Cub, as Chicago foolishly traded him away in June of that year, to join St. Louis and the likes off... 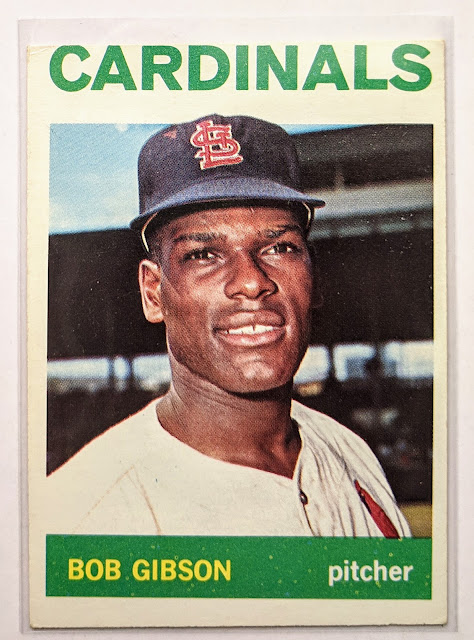 Bob Gibson! Scored this raw '64 last week for single-digits shipped, which I thought was a pretty good deal, even though it's a bit miscut. 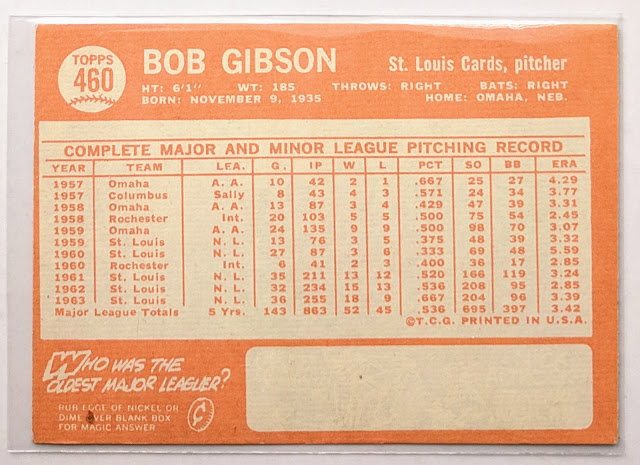 Brock and Gibson would bring home rings in '64 and '67 before meeting up in Cooperstown.

But the vintage set that I consider my top priority is... 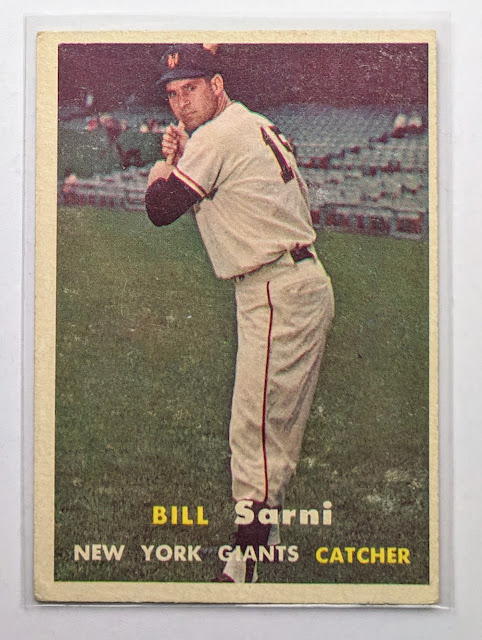 1957 Topps! Here's a "free card" I snagged the other day. eBay did a quick promotion where you could get $3 off anything over $3. I searched for '57 Topps cards in that price range and ultimately found this Bill Sarni need for $3.06 buy-it-now with free shipping. I used the $3-off discount code, plus I got 6¢ eBay Bucks (a.k.a. store credit rebate) to bring me back to neutral. I tend to stick to around a buck per common for my '57 set (at card shows or on COMC where shipping cost is less of a factor), but I "splurged" a little thanks to the promotion. 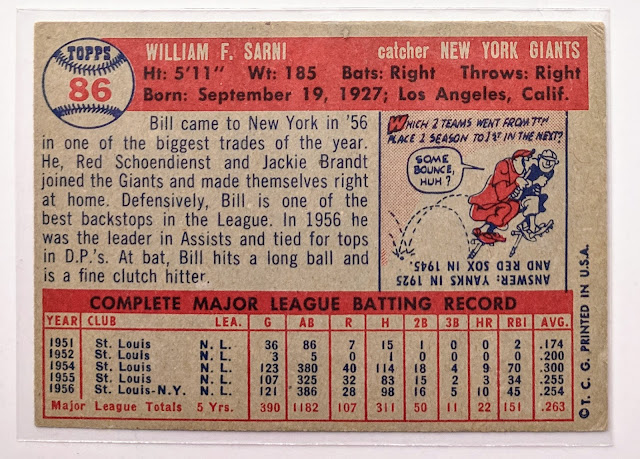 Reading up on him, Sarni had a heart attack during spring training of 1957 that ended his playing career, so this is a sunset card featuring complete career stats. He went onto coach for a little while then became a businessman.

And the "plastic" mentioned in the post title wasn't just referring to the Lou Brock slab, but also this vintage baseball toy I picked up... 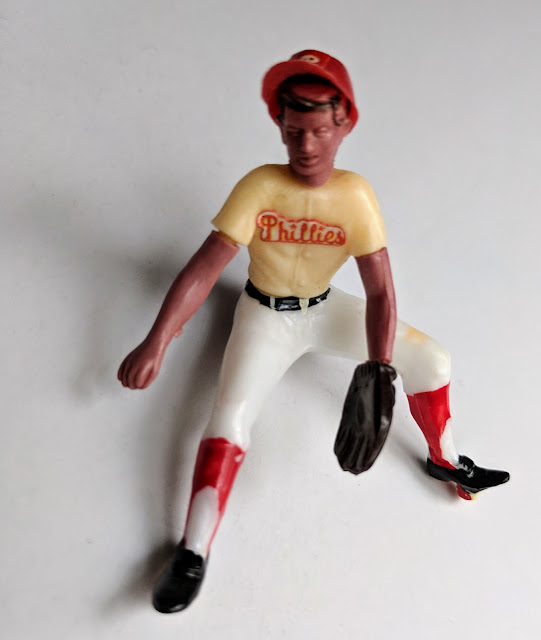 This is a Richie (Dick) Allen 1969 Transogram figure. I first became aware of these things because they originally came with a yellow card you could cut out from the back of the box, which was paid tribute to in 2018 Heritage (You remember those super-yellow Heritage inserts last year, right? Those things.). While "new in box" versions are out of my price range, I scored just the loose toy for under a blaster shipped. Still would like to score an accompanying card one of these days. 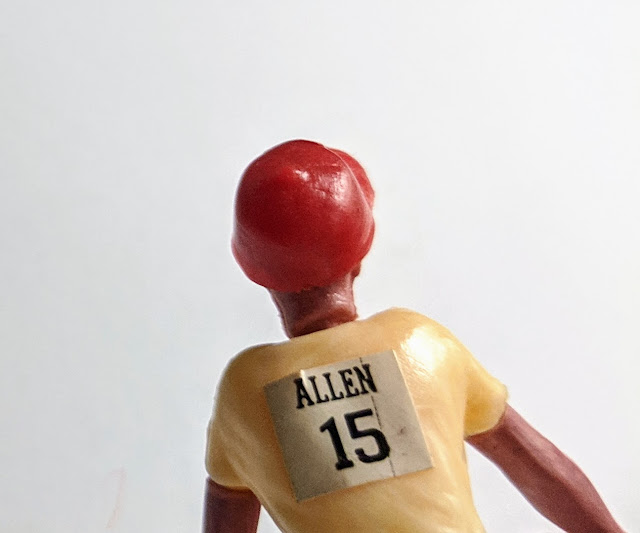 Normally I try to keep my player collections "cards only", but Allen is one of my top-tier guys (been a fan ever since I got a ball signed by him in-person as a kid in the early 90s), so I make an exception for him. (I also have a Dick Allen marble that Mark Hoyle gave me.) You can move the figure around at the neck, waste, and arms, but seeing as this is a 50-year old toy, I'll try not to fiddle with it too much lest I break it. But yeah, neat little item. 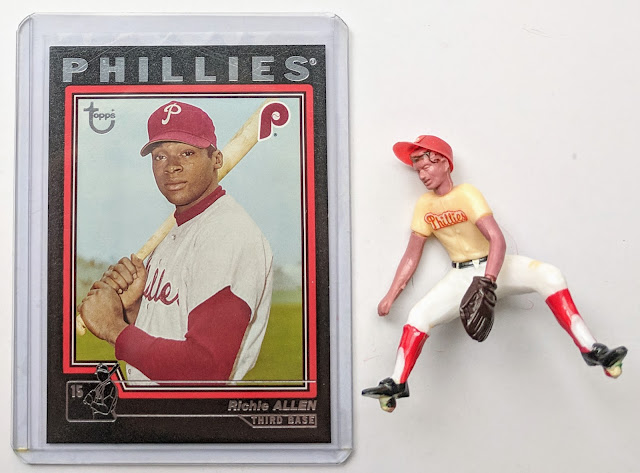 For scale, here's the figure along with another recent PC add-- the /99 black (or "charcoal" if you ask me) parallel from 2004 Topps Retired.

That's it for today. Thanks for stopping by.
Posted by defgav at 3:48 PM