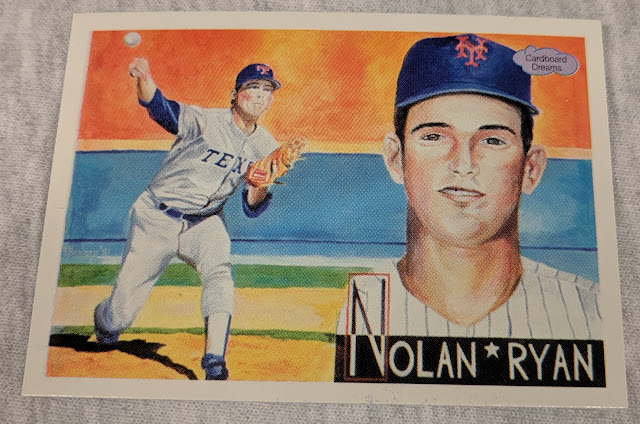 Yeah, yeah, I hate art cards (as opposed to real 1/1 pieces of art which I love, but once you mass produce it, the gloves are off). This is fine. You got young Nolan on the Mets in the portrait, and a current (at the time) Nolan on the Rangers in the action shot. 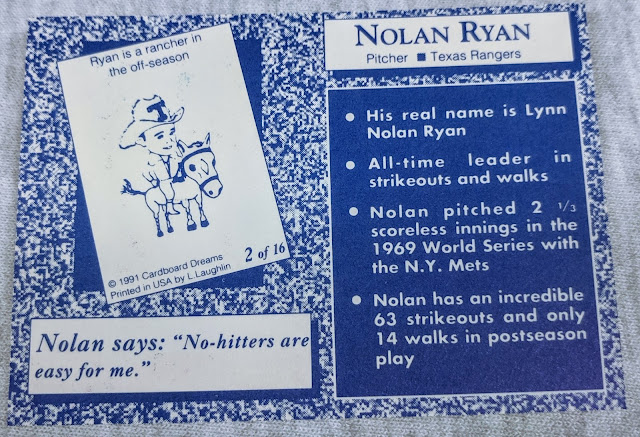 OMG! ADORBS!! Look at lil nolan on that lil pony! So cute!

I don't think these are real quotes. He wouldn't really say, "No-hitters are easy for me." would he?

Mookie Betts' middle name is Lynn. He was born just a bit after this '91 card came out (1992). Other ballplayers whose middle name is Lynn include Bob Welch, Todd Helton, Kyle Farnsworth, Jarred Cosart, Adam Duvall, and Danny Jackson. Who knew?!

And funny enough, Gary Nolan (of the Big Red Machine) had the middle name Lynn! Gary Lynn Nolan is just a one, rearranged letter off from Lynn Nolan Ryan. 6753 career strikeouts between the pair with only a G/N difference in their full names. Wow.

I'd wager that the best known "Lynn" ballplayer is Fred Lynn. MVP/ROY in 1975, and had a few other excellent years too. As far as standout Nolans, well 2nd place after Ryan would likely go to Nolan Arenado. Other good "Ryan" players include Howard, Braun, and Klesko. (Honorable mention to Ryne Sandberg.)

"All-time leader in strikeouts and walks"

Nolan Ryan is still 1st all-time in strikeouts (5714). Second is Randy Johnson (4875). As far as active players at the time of this writing,  CC Sabathia is 17th with 3080, followed by Justin Verlander at 18th with 2949.. neither of which has much chance of catching the Express at this stage of their career.

Nolan is also still #1 in all-time walks allowed with no one threatening his mark of 2,795. It's probably one of those unbreakable records, honestly. The next closest guy is Steve Carlton in a distant second place with 1,833. The highest of active guys is CC again with "only" 1,094. With how bullpens are used these days, it's safe to say Nolan will still be standing as the all-time strikeouts and walks leader when the sun explodes and ends all life on earth. Unless in like 2099 cyborg pitchers overtake the record books, in which case, all bets are off. Those robotic freaks could throw 400 innings a year and never tire.

Funny that one game in relief in '69 by young Nolan would stand as his only World Series experience. But hey, it was good enough for a championship ring, something that plenty of Hall of Fame players never got.. (Williams, Banks, Killebrew, McCovey, Gwynn, etc).. though I'm sure he would have rather gotten some more.

I've got a couple Nolan Ryan autographs, not to brag ..a pair of Topps Retired refractors. 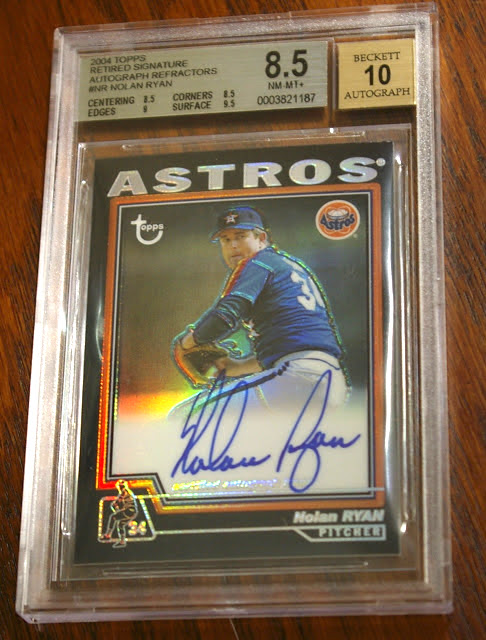 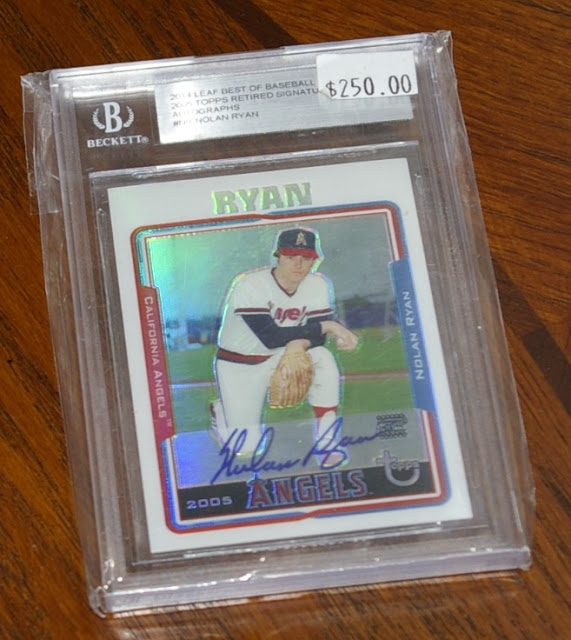 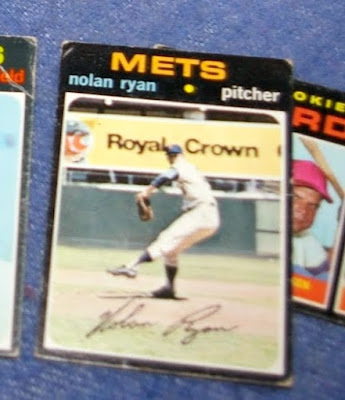 Hat's off to you, Nolan Ryan!! One of the greats.