Time for another installment of Comic Book Breakdown where we take a look at some highlights from a random comic book in my little collection. 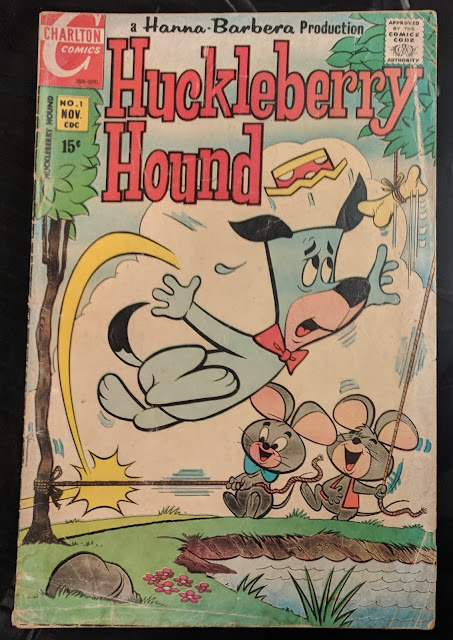 Huckleberry Hound, bitches! And it's a #1! Big money! haha Nah, in this condition, we're looking at "dollar bin" territory, but still cool. Got this and a few other comics in a trade for customs earlier this year. The cover is a little beat up, but I love it. If/when I get serious about collecting comics again, I'd probably go hard with off-condition old stuff. As opposed to baseball cards that I like to be "in mint condition" I think I prefer old comics roughed up.

It makes me sad that people get comics graded/slabbed so they can never be read again. Baseball cards, I get. Sure, you can't smell or feel a card when it's encased, but visually (what counts), you're not missing anything. I know some old-school card collectors are against graded cards, but they don't really bother me. But graded comics on the other hand.. yes, that bothers me. While the covers are often great, inside is where the heart is. Seems a shame to seal that off. 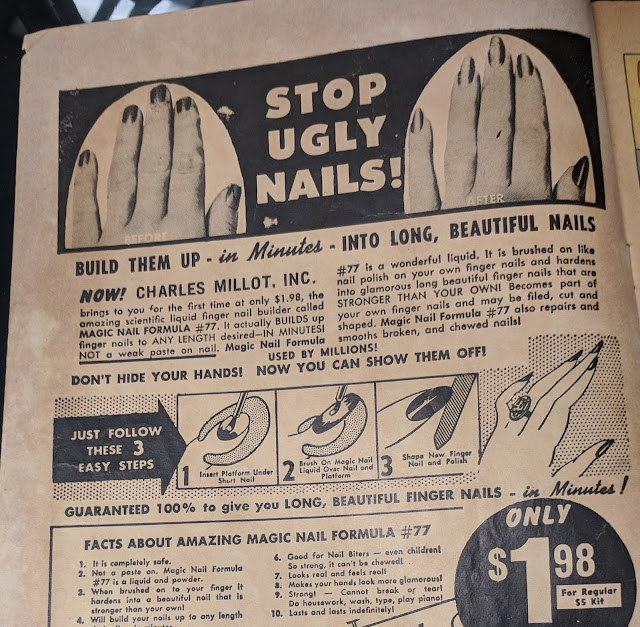 The inside cover ad is for nail care?! "Long, beautiful nails"? Wait, is this comic aimed at young ladies? I guess Huckleberry is meant to have unisex appeal, but that seems odd. 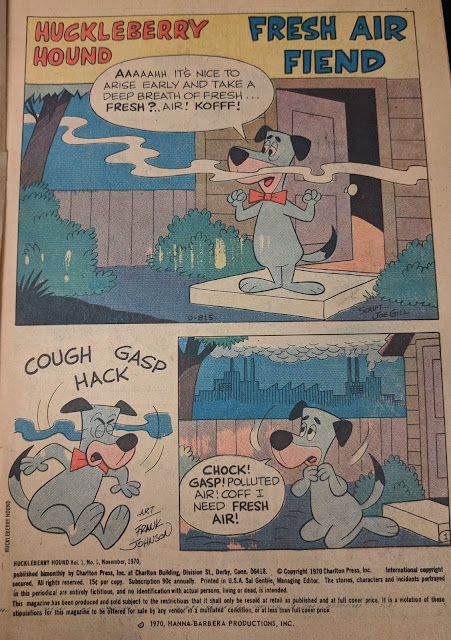 I feel like the Hanna-Barbera glory days were just a little before my time, though I recall catching some Huckleberry Hound cartoons here and there as a kid. Probably my all-time favorite Hanna-Barbera jam is the Yogi's First Christmas special (1980), which Huckleberry had a small part in. He always seemed pretty cool, with his laid back demeanor and southern drawl.

Vol. 1 No. 1 dated November 1970. Hmm.. looks like there were Huckleberry Hound comics going back into the 1950s, so I'm not sure how they got away with this being a #1. I guess it was the first one with Charlton Comics, while the older ones were from Dell. But I'm not much of a comic book historian, so take anything I say with a grain of salt.

In the last installment of Comic Book Breakdown (which was the first), Billy Kingsley schooled me: "The standard rule of thumb is dating them three months after issue, but some times and companies vary. It was determined in the early 1940s that clueless newsstand keepers would return them for a refund thinking they were old, but a date in the future would keep them on the shelves longer." Ok, so if it says November 1970, this probably hit stands around August of 1970.


The #1 song in August of 1970 was "(They Long to Be) Close to You" by The Carpenters. I've always kinda liked the song, in a guilty pleasure sort of way. 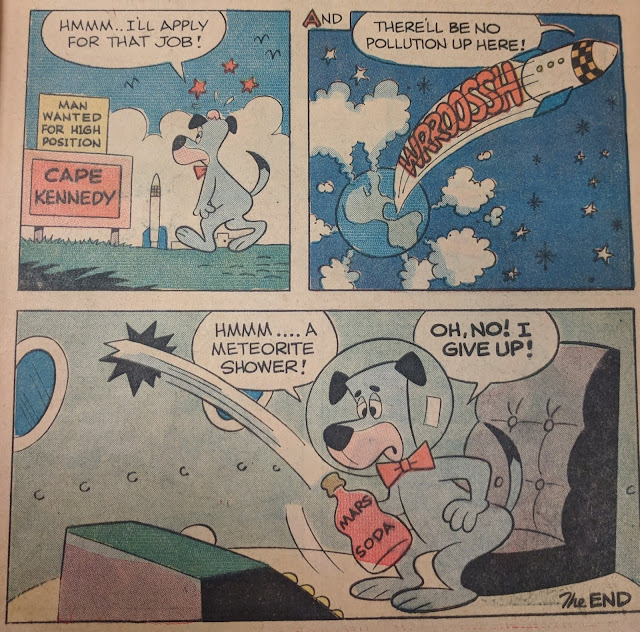 So this first story involves Huckleberry trying to find someplace without pollution to just sit back chill at for a while without litter and smog harshing his mellow. Wow, even back in 1970 people were getting concerned about the environment? If only humans would have been more like Huckleberry here and given more of a shit back then, maybe we wouldn't be so screwed today. Hell, at this point, I'm just thankful I never had kids... for their sake. It's only gonna get worse from here. That's one good thing about being old.. I'll be gone by the time the shit really hits the fan.

But getting off my soapbox, yeah, Huckleberry went so far as to travel to space, but even then he ended up getting hit in the crotch with a Mars Soda bottle. 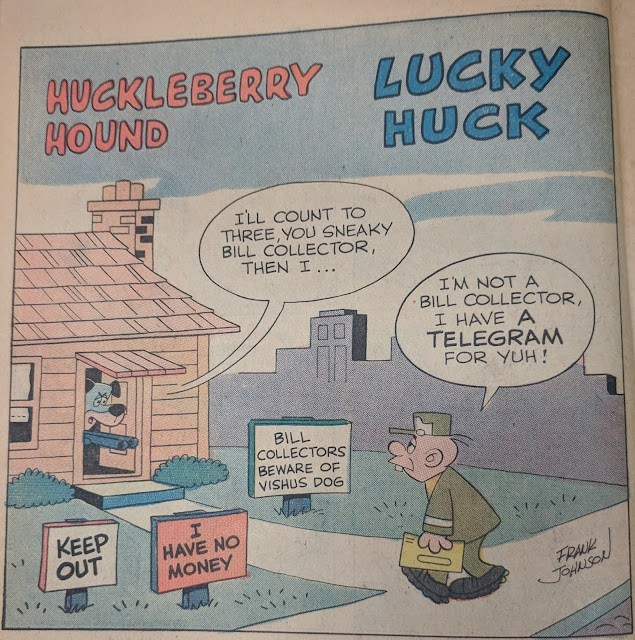 Geez, calm your tits, Huckleberry! I thought you were supposed to be laid back? Now you're pulling a shotgun on strangers? 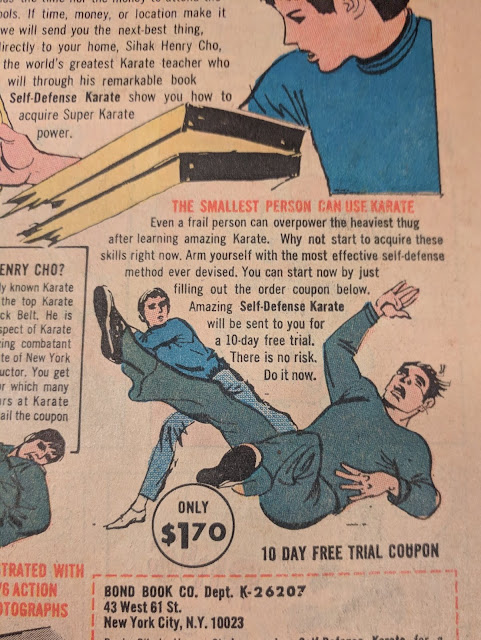 THE SMALLEST PERSON CAN USE KARATE 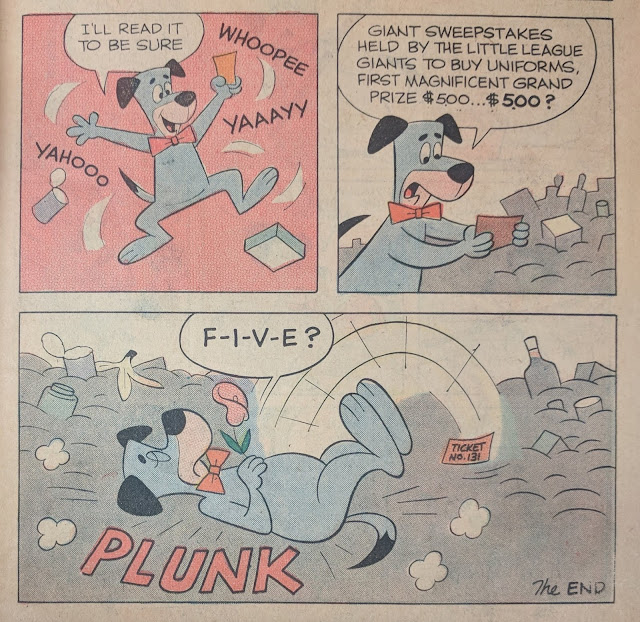 So in this story, Huckleberry wins a grand prize. When I first read it, looked to me like he won $500, which seems pretty good to me.. not sure why he's dying over it. But then looking closer, there's a decimal point, so just $5.00. Sure, not worth going through a lot of trouble (Huckleberry did some trash-digging to find his ticket), but still.. free money is free money! 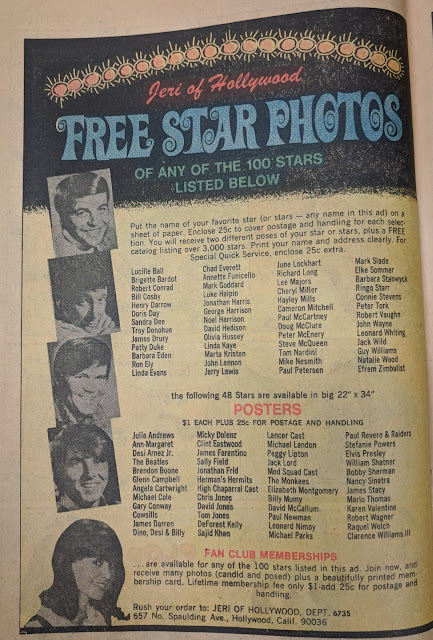 Here's a kinda cool ad. Photos and posters of celebrities. If this offer were still valid today, I'd probably go for all the Beatles stuff (who had just broken up a few months prior to this, in April 1970), and maybe a Monkees group poster. Let me know in the comments who you'd go for.


Let It Be was the twelfth and final studio album by the English rock band the Beatles. It was released on 8 May 1970 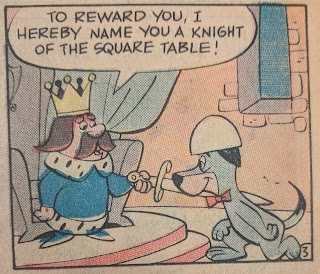 The next story is the longest one in the comic.. several pages, taking place in medieval times. Huckleberry lucks into being knighted. 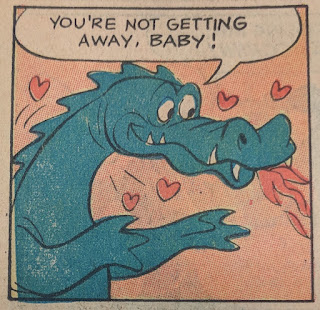 Hey now! This wouldn't fly in today's "me too movement" culture, but back then, an amorous dragon who wouldn't take no for an answer was just silly. 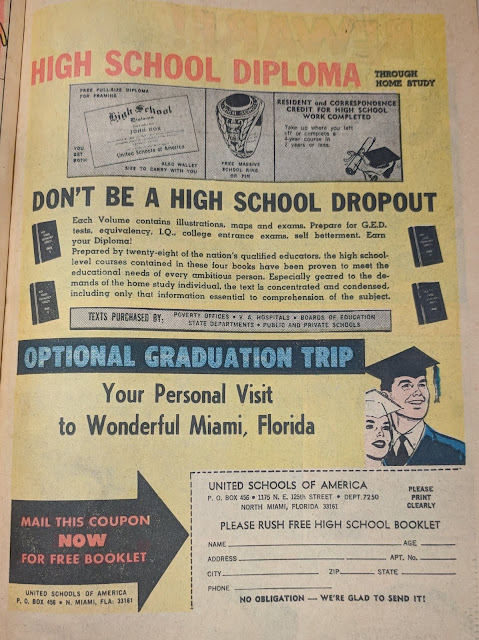 This ad shames dropouts to buy some books and study for their GED. If you pass, you can book a flight to wonderful Miami to throw your mortarboard in the air. Oh hey, speaking of Florida, I hope all you guys in the South are safe from Hurricane Michael.

Then there was a one-page Mr. Jinks story. And by the way, the mice on the cover, Pixie and Dixie, do not appear inside the comic. So misleading! 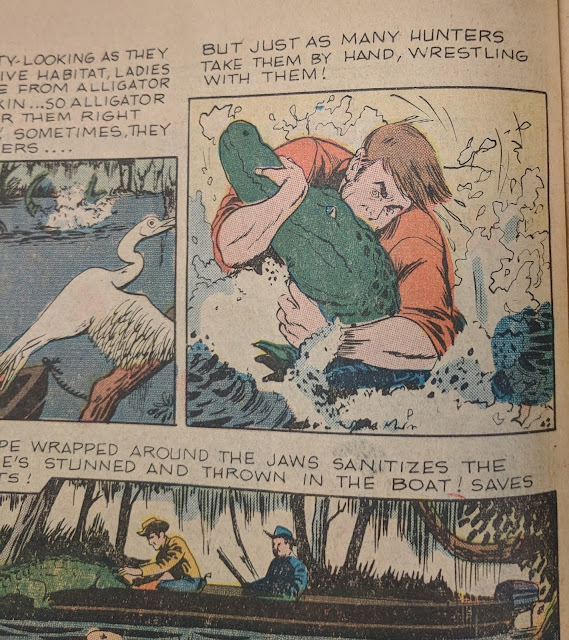 Then there was a weird, non-humorous swamp story. Seemed out of place in a Huckleberry Hound comic book, but I suppose a little variety is nice. 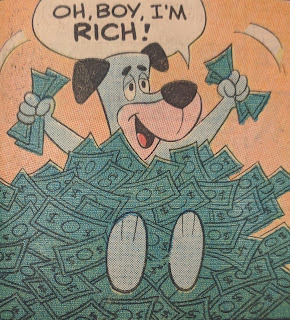 Here's me yesterday when Greg Z. told me the Christian Yelich card I bought for $3 had recently sold for $72.

Lol, no in this final story, Huckleberry buys a used car that turns out to have belonged to some thieves and had a bunch of cash hidden in it. 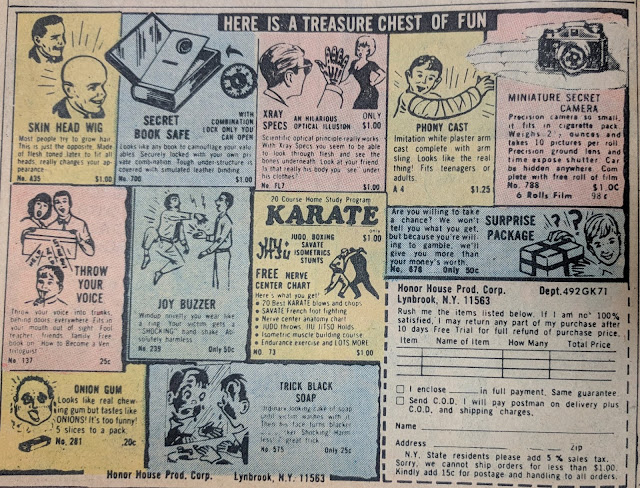 You gotta wonder just how many thousands of little boys bought Xray Specs like these in a vain attempt at seeing a titty. 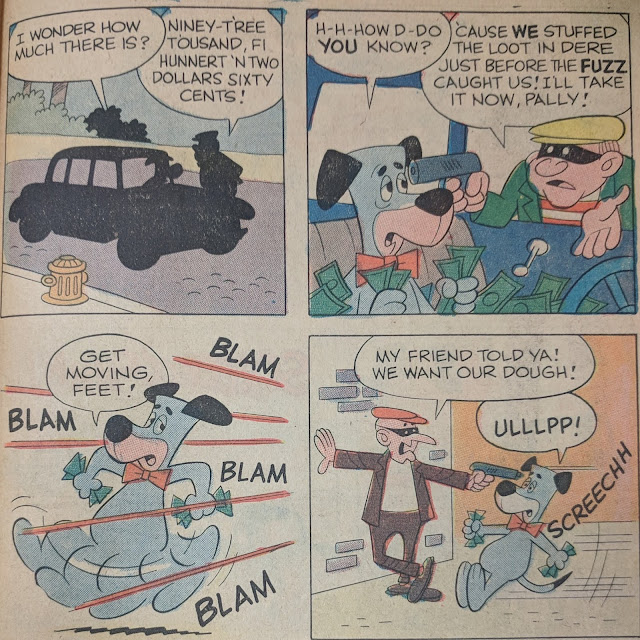 So much gun violence for a Huckleberry Hound comic! If only Huckleberry had his shotgun with him, he could have stood his ground. #sensiblegunlawsnow

Anyways, the cops catch the bad guys and take the car (and cash) as evidence. Poor Huckleberry. 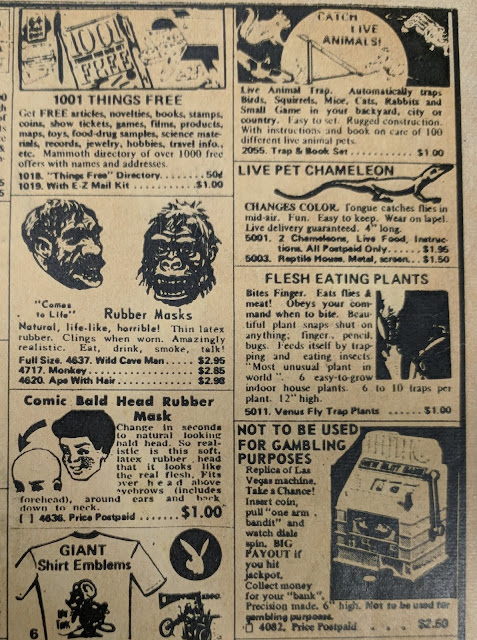 One last "crazy shit you can buy" ad. A shirt with a Playboy bunny logo would be kinda cool. Sending live chameleons through the mail seems cruel. I always wanted to get a venus flytrap. Hmm.. I've got a few fruit flies buzzing around my house. I could go for a carnivorous plant for a buck.

Thanks for joining us for this episode of Comic Book Breakdown! See you next time.
Posted by defgav at 6:31 PM

Email ThisBlogThis!Share to TwitterShare to FacebookShare to Pinterest
Labels: Comics