I always look forward to doing these annual posts, even if their appeal is limited and typically don't get many views. But I like an excuse to look up how guys who share my first name performed over the past season. 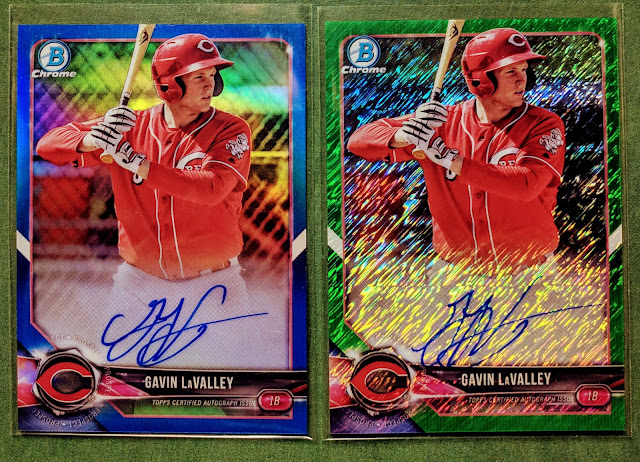 My most active Gavin PC is Gavin LaValley. I was excited to see him have an autograph on the 2018 Bowman Chrome checklist, though it ended up souring for me. His superfractor auto popped up on eBay recently at a low opening bid. I was prepared to put up a very strong bid. But then with 2 days left to go, the auction jumped all the way up to $255. WTF?! Just this past June I paid $33 for his 2014 Bowman Chrome Draft superfractor (not an autograph, but still, that's his 1st Bowman). And the kicker? LaValley had a shitty 2018 season and at this point is probably a longshot to ever make the major leagues. Not sure who these guys are wanting to spend hundreds of dollars on one of his cards. Part of me is sad that I can no longer say I own every Gavin LaValley superfractor in existence, as I had been able to for a few months there (2014 Bowman Draft, 2014 Bowman Mini, 2018 Bowman Regular). The superfractor auto ended up selling for $300 at auction. A week or two later it popped up again at a buy-it-now of $399 or best offer. After a few days, the listing was pulled by the seller, perhaps due to a backdoor sale worked out away from eBay, or maybe the seller decided to hang onto it after not getting much interest in the card.

LaValley spent 2018 in AA, batting .209 with 13 dingers and 14 doubles. Quite a step back from his promising 2017 (.269, 18 dingers, 30 doubles). He's a first baseman (where big offensive numbers are expected) who will be 24 next season. Not "top prospect" territory. Don't get me wrong, I'm still rooting for him, and I hate to sound like I'm talking shit, but my point is it's ridiculous to be paying hundreds of dollars for one of his cards at this point.

Who knows.. I'll keep an eye out and perhaps one day in a few years if LaValley doesn't pan out, the guy who bought it will relist it and take a massive bath on it and I'll snag it for a fraction of the price. 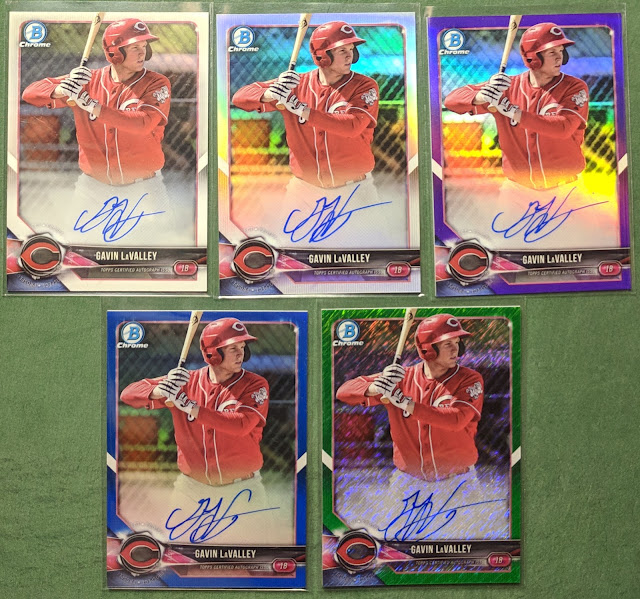 Ok, now let's get into other Gavins. 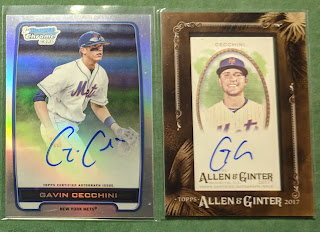 Sadly, 2018 was the first year since before Gavin Floyd debuted back in 2004 that there were zero Gavins in MLB. Floyd and Gavin Cecchini overlapped in 2016, with the former going out and the latter coming up. Cecchini then got into 32 games with the Mets in 2017, but he didn't make it out of the minors in 2018. He was playing well in Triple A and in line for a promotion up top, but unfortunately he broke a bone in his foot that derailed his season and limited him to 31 games for the year. Bummer. Hopefully he comes back strong in 2019.

And there are a bunch of other Gavins in the minors, so I wouldn't expect this Gavinless streak to last long.

Collins split his time between playing 3B and catcher down in the Indians chain. His offensive numbers were down this year after a solid 2017, but hopefully he gets back on track in 2019.


Gavin Lavallee
Not a typo! It's hilarious that there are two different baseball players: Gavin LaValley and Gavin Lavallee. Confusing! I already talked about LaValley above, but Lavallee went undrafted from Eastern Connecticut State University and plays indie ball. He had a solid 2018, hitting .329 in 41 games, playing 3B and RF. Oh man-- I think my dream Gavin card/custom would be a dual auto signed by both Gavin Lavallee and Gavin LaValley. 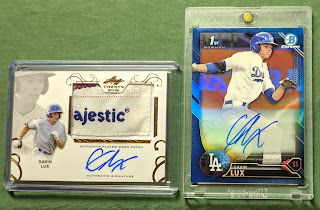 The Dodgers' #1 pick in 2016, Lux bounced back from a lackluster 2017 to put up a strong 2018 season. Drawing comparisons to Corey Seager, the 20-year old shortstop got promoted to AA this year. Overall, he hit .324 with 15 tatters. I hear his Fortnite game is strong too. 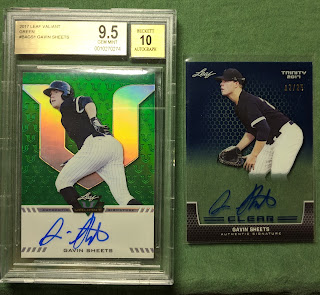 A 2nd round pick by the White Sox last year, Sheets performed adequately in his first full pro season, hitting .293 with 6 homers and 61 RBI in A ball. 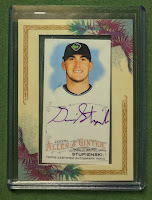 Here's a guy I was really rooting for-- a cousin of a cardblogger!-- but unfortunately Stupienski's baseball career hasn't been going well. Despite solid defense behind the plate and batting .307 in the minors, Arizona cut him loose after 2017, and he spent 2018 on an independent team in Winnipeg.

Last Name Gavins - Maybe not "true" Gavins, but they get some love too. 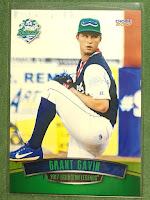 The 23-year old made it up to AA and pitched well out of the pen this year. Grant has also looked good in the Arizona Fall League so far, allowing just 1 earned run over 9 innings. I'd expect him to make it to AAA next year and hopefully get called up to Kansas City before too long. 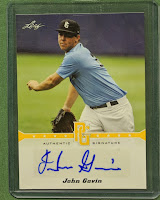 Gavin Pittore was released back in July 2017 and didn't play at all in 2018, which surprises me because his numbers in the minors looked good (2.52 career ERA). Perhaps he had injury issues? I got a nice TTM return from him a couple years back where he included a friendly note, so I was definitely a fan and hoped he'd make it to the bigs. Bummer. All the best to Mr. Pittore in the next chapter of his life. Lastly, squeezing in the one football Gavin, Escobar briefly suited up with the Browns and then Dolphins in 2018, but didn't get into a game with either of them. I don't think he's officially retired yet, but at this point I'd be surprised to see him play another NFL down, unfortunately. But hey, best of luck to him and all the other Gavins out there!


And that wraps up the 2018 update of pro baseball (and football) players named Gavin. Thanks for reading!
Posted by defgav at 4:10 PM