Yep, I'm making it official and stating on the blog that... I'm collecting 1964 Topps. It's been less than a month since I formerly announced I was working on completing 1965 Topps. But hey, it's my blog so I can announce that I intend to visit friggin' Saturn if I want to. It ain't legally binding or anything. '64 Topps will be more of a longterm, backburning goal for me, but figured I'd throw a wantlist together now for trading purposes. I pride myself on having a behemoth of a wantlist that hopefully facilitates trades from all walks of collectors. 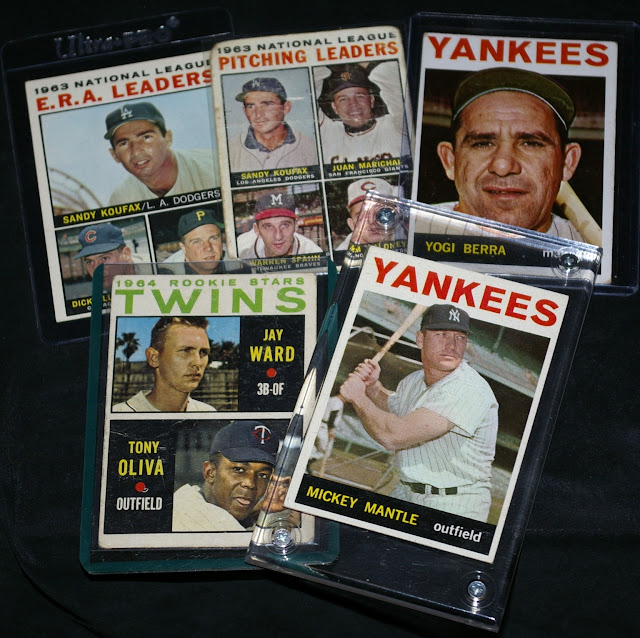 After getting the checklist spreadsheet together and digging up what I could from the recesses of my collection, I find myself right at 10% complete as I begin this journey, owning 59 cards out of 589. As far as heavy lifting out of the way, I've already got a sharp Mantle, bought a few years back. Also got the Yogi, Gaylord, and Dick Allen RC. So that's a decent foothold, though still a long way to go.

It's a set that's never really wowed me, but I've always kinda liked it and in recent years it's just started appealing to me more. Perhaps it's my obsession with 2004 Topps Retired.. as '64 is definitely the direct ancestor of the 2004 design, with the big block team name at the top. After getting a decent little starter lot from trader Kevin G. a few months ago, it seemed like a no-brainer to go after finishing it eventually.

Here's my 1964 Topps wantlist. If you've got any available '64s and are interested in working out a trade for them, please get in touch!

I recently traded with Jud W. whom I met through Listia.. I believe it's the first pure trade I've done thanks to Listia. I gave him a couple Orioles hits (finally I've traded with an O's collector!), and in return he hooked me up with some vintage set needs. 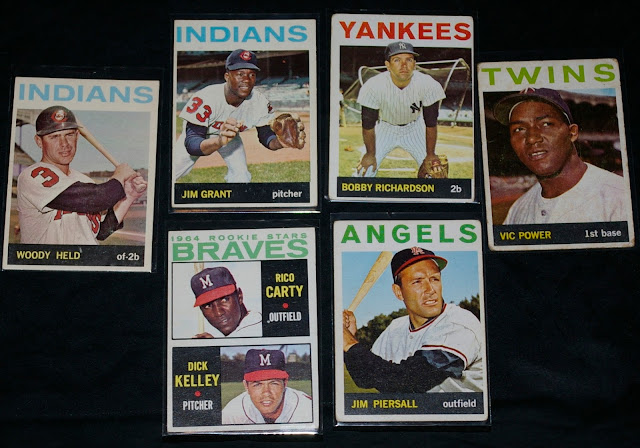 While the 64s were nice, my main interest from Jud were a few '65s he had that I needed for my setbuild: 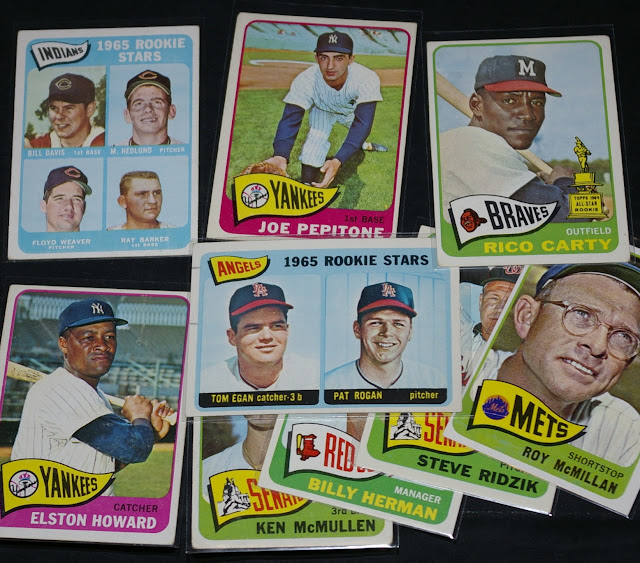 This lovely lot is highlighted by a couple esteemed Yanks, Elston Howard and Joe Pepitone. Rico Carty also makes another appearance, here with a terrific All-Star Rookie trophy. I'm now at 42.5% complete with 1965.

Thanks to Jud for the trade and thanks to you for reading!
Posted by defgav at 4:01 PM