This post is to show off some recent additions to my PCs of guys who went to the same schools I did. Most of these were included in my most recent COMC order, and a few were in eBay bulk purchases for free combined shipping.

Regular readers of this blog are familiar with my Guys From Granite minicollection, made up of guys who went to the same highschool as me and went on to become professional athletes. I admit it's a bit weird that I'm so gung-ho about this avenue of my collection, yet am pretty indifferent to collecting guys from the university I went to, SDSU. I also feel nothing for the Oregon Ducks, making me stick out among most other sports fans in my current home state. I just don't really care about college sports very much. Still, though, I like to show some school spirit from time to time and add cards of former Aztecs and other notable hometown guys. 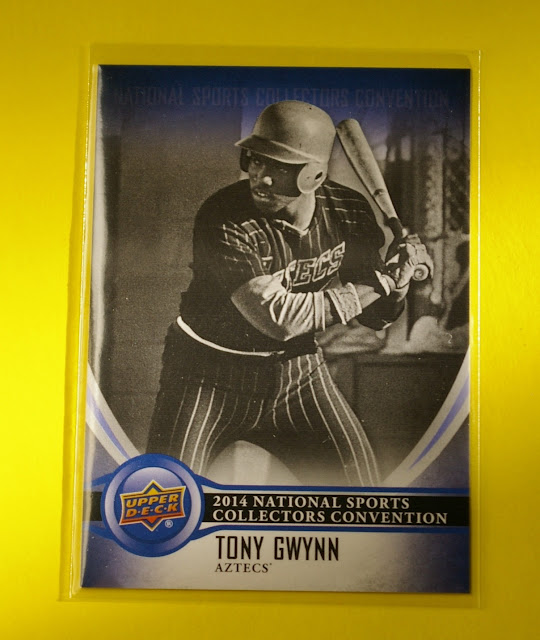 I think this is my first Tony Gwynn Aztec card. I doubt it'll be the last-- I'll definitely try hunting down a few more different ones. Upper Deck has been putting out a few such cards in recent years, including some featuring Tony from his days starring on the basketball team, including autos. (That set came out right after he died, so they went fast and expensive.) 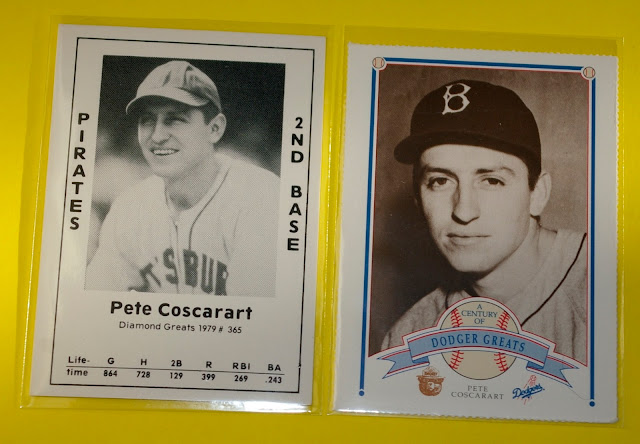 Pete Coscarart was the first San Diego State University alum to play major league baseball. He also played minor league ball in my current home of Portland, Oregon for a few years. Then after a decent MLB career with Brooklyn and Pittsburgh, he rounded out his playing days on the PCL Padres (1946-1949). I've now got 4 of his (according to Beckett) 15 cards in existence.

My Aztec Alumni minicollection isn't really a thing. Just attending SDSU isn't enough to make me want to collect a guy. Notable names there are Mark Grace, Harold Reynolds, Al Newman, Aaron Harang, Dave Smith, Addison Reed, Travis Lee, Tony Clark, Bud Black. Yeah, they don't do anything for me. Maybe someday. An exception to this is Stephen Strasburg who I've kinda started a passive PC for earlier this year. There's also Graig Nettles, who I sort of collect but mainly because of his time on the Padres. Gwynn family members Tony Jr and Chris Gwynn are also former Aztecs; maybe I'll collect them at some point. 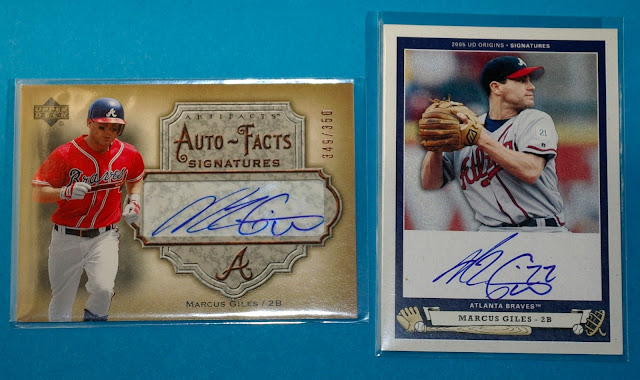 My ol' classmate Marcus Giles; The guy who allows me to brag I've shared a locker room with an all-star. I don't typically go out of my way for Giles cards anymore (pretty sure he's already in my Hundred Card Club), but these 2 autos were like $3 combined via COMC, so I couldn't pass them up. 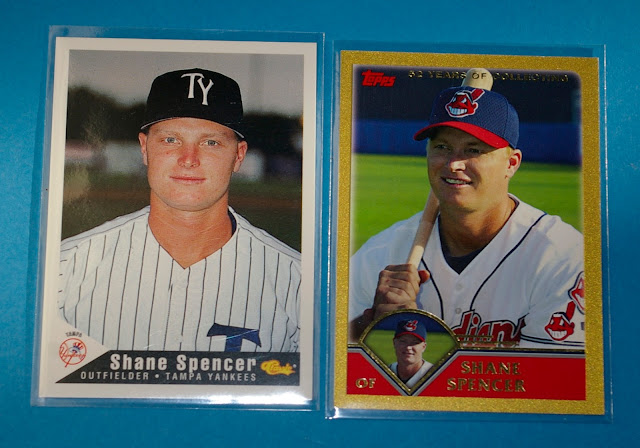 Another notable GHHS Eagle, Shane Spencer. Here we've got an early minor league card from '94, plus a numbered gold parallel from 2003 Topps.

And here are Bowman cards of a couple Guys From Granite who weren't able to crack the big leagues. The Scott Shoemaker gold refractor is #'d /50. Casey Craig is represented with a blue refractor (I think #'d /150) and a gold (brown) parallel. 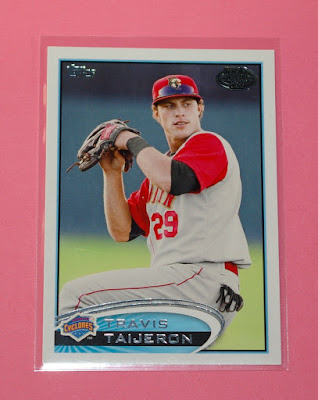 Travis Taijeron is the active Guy From Granite I only found out about recently. This 2012 Topps Pro Debut was the last mainstream base card I needed of his (ok, his only other card is 2012 Heritage Minors). He had a very nice 2015 season for the Mets' AAA team, batting .274 with 25 home runs. Unfortunately it wasn't enough to get a September call-up, but hopefully he's able to progress next year and gets a chance to prove himself on the big league level. 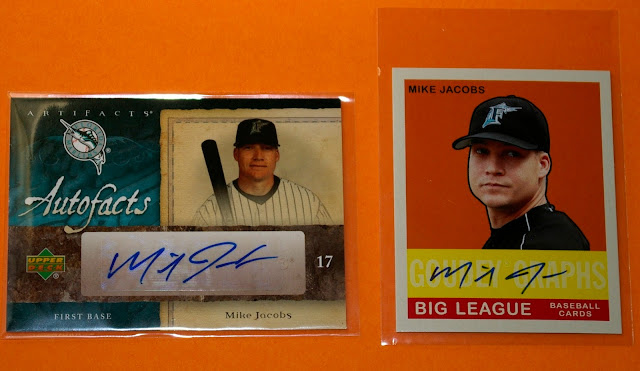 Now here's a tricky one: Mike Jacobs is neither a Guy From Granite nor an Aztec Alum. But he's a Guy From Grossmont. I spent more years than I care to admit at Grossmont College before transferring to San Diego State. Not only did Jacobs attend the same community college as me, but during the same timeframe. I shared an anecdote a while back about how I think I may have even had a class with him. So I was happy to add my first couple of certified autos of his (each ran me a buck-something). I probably won't work too hard expanding my Guys From Grossmont collection, but who knows. Other notable names from the junior college include Quintin Berry, Mike Hartley, Sean O'Sullivan, Jesse Orosco Jr (cool, I didn't realize he had a son playing professionally), and Carlos Torres. There's also overlap with several Guys From Granite.

But back to Mike Jacobs, he had some solid seasons with the Marlins a few years back, with a career home run total of an even 100, but hasn't seen major league action since 2012. He's been playing in Mexico with decent success, spending 2015 in Oaxaca (pronounced wa-hah-kah) batting .276 with 14 home runs in 111 games.

OK, that wraps up this post updating recent pick-ups of local guys. Thanks for reading!
Posted by defgav at 4:02 PM