I've got some family in the Louisville, Kentucky area, so I find myself over there every few years for family get-togethers. Once back in 2004, me and 3 or 4 cousins took in a Louisville Bats game. I've still got the stub, though I don't have a ton of memories from the game. I remember being impressed by the stadium (Louisville Slugger Field). For a minor league team (Reds' AAA affiliate), it seemed pretty snazzy. And I remember being excited to see John Vander Wal in the lineup. I liked him from back when he was a pinch-hitting extraordinaire for the Padres for a couple years in the late 90s (hit .400 in the '98 postseason). So it was nice to see a familiar name mixed in with a bunch of kids I had never heard of. At 38, he was easily the oldest dude on the team. It was his last year playing, but not his final stop; he did make it up to Cincinnati for some games to end the season. But after batting .118 that year, Vander Wal's career was done. According to Wikipedia, he's currently a scout for the Padres.

As an aside, there's a musician I like with a kinda similar name, John Vanderslice.


Anyways, I'm not sure if there's a website out there where I could find a boxscore for this particular game, but if so, please let me know in the comments. Other notable names that played for the Bats that year that may or may not have played in the game were Austin Kearns and Jason LaRue. I don't recall who won the game, but I know the Columbus Clippers bested them on the season, winning the division while Louisville got 2nd place. The Clippers (Yankees AAA) had some big names on the team that year, with Robinson Cano and Guy From Granite Shane Spencer among them.

So that's pretty much all I got. My uncle owned a plumbing business in Louisville, and looks like the tickets were a gift from a supplier, as they're season tickets from East End Plumbing Supply.

Moving onto other random stuff... 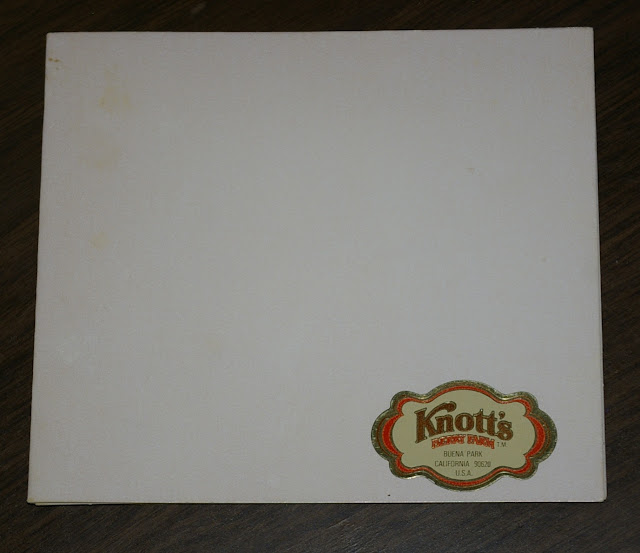 Here's a little photo booklet thing from Knott's Berry Farm. If you're not familiar, it's an amusement park in the LA area. Obviously can't hold a candle to Disneyland, but still a fun place. I went there a couple times in my youth. I've never been much for rollercoasters and wild rides like that thanks to being prone to motion sickness, but there's still enough other stuff going on there to occupy a kid for a day. Lots of "old-timey" themed attractions, if I remember right, and Snoopy was the mascot at the time.

But back to this photo booklet.. What could be inside?... 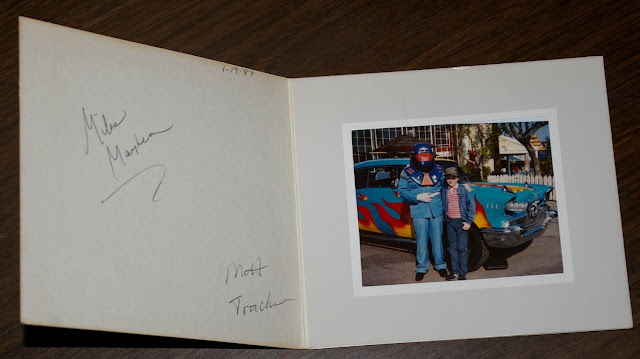 Oooh, it's a photo of me with Miles Mayhem (fictional bad guy leader character from the MASK cartoon). Looks like my mom dated it 1/19/87 at the top (That was nice of her to have that foresight.. so now these decades later I don't have to guess when it was). It's also signed by Matt Tracker (fictional good guy leader character from MASK cartoon), though I seem to recall he wasn't there "in person" which was kind of a bummer. I was a big MASK fan, probably in the running for my second favorite toy line behind GI Joe, so it was pretty cool for me. I mean, I didn't believe it was the "real" Miles Mayhem or anything. but still it was a neat experience. I had the toy version of that car. I'm not a big car guy-- what is that, a '57 Chevy? Something like that. If I won the lottery, I'd totally get one of those with that exact paint job. That's just a dream, but maybe I'll at least buy the toy version on eBay one of these days. Long since gotten rid of the one I had. 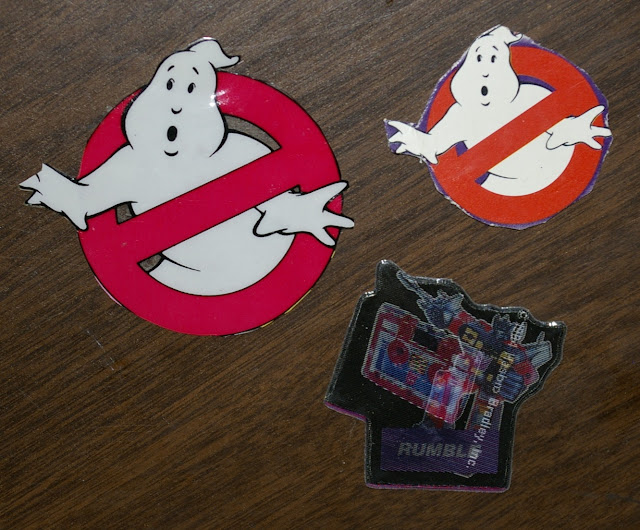 Oh and I also really liked Ghostbusters. I had a bunch of their toys. I also thought the logo was cool (Who didn't, right?) and would sometimes cut it out of packaging and whatnot, as evidenced by these couple specimens here. You can see that the ghost's right hand was tricky to cut out. The other thing here is a Transformers lenticular puffy sticker. Here's a closer look.. 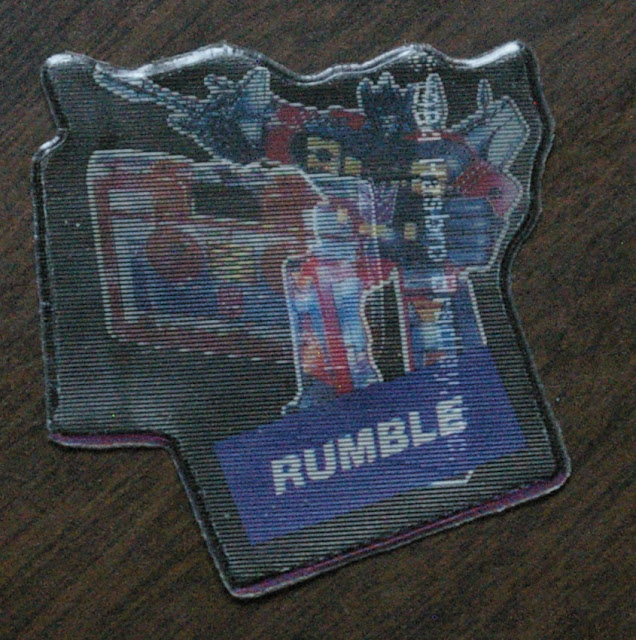 I think I may have had a second-hand Rumble toy. (Either him or the nearly identical other guy.) He was a robot who transformed into the form of a cassette tape. The lenticular concept works well with Transformers since you can see both forms of the guy. I never owned either of the cassette-player Transformers as a kid, though as an adult, I did finally get them both through a trade for some bootlegs or something a few years ago, and I think they've even made appearances on the blog in Archives Adventures breaks.

I'm sure I'll start showing actual toys in these Sentimental Sundays posts soon, though so far I've been going through a bag of flat stuff, which is why it's been mostly ticket stubs, photos, and stickers up to this point.

That's it for today. Thanks for swinging by!
Posted by defgav at 10:25 AM