I've done it! I've reached the "Tough Schmidt" point in my 1973 Topps setbuild. If you're unfamiliar, that's the term for when you've completed the set aside from the pesky top value card, #615 "Rookie Third Basemen" Ron Cey/John Dave Hilton/Mike Schmidt. (I realize the old gag of Schmidt sounding close to shit is getting pretty played out at this point, and for that I'm sorry.)

You may recall a few weeks ago, I got cute and tried to obtain #615 before knocking out the rest of the set. The cardboard gods punished me for this impudence and the card I had bought turned out to be a fake. That's right: Counterfeit Schmidt! I learned my lesson and put that card on the backburner while I picked off the rest of my needs. The final few cards come thanks to COMC and eBay. Let's check out a few highlights of these latecomers. 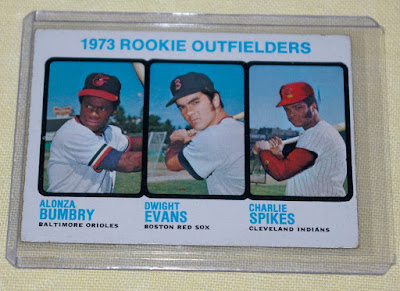 The Schmidt RC gets all the attention, but honestly I'm just about as excited over this Dwight Evans rookie. Dewy is sort of a sleeper PC for me; his card aren't often on the forefront of my cardboard agenda, but I always really love 'em when they enter my collection. So I'm happy to now own the RC of this Hall-worthy Boston legend. 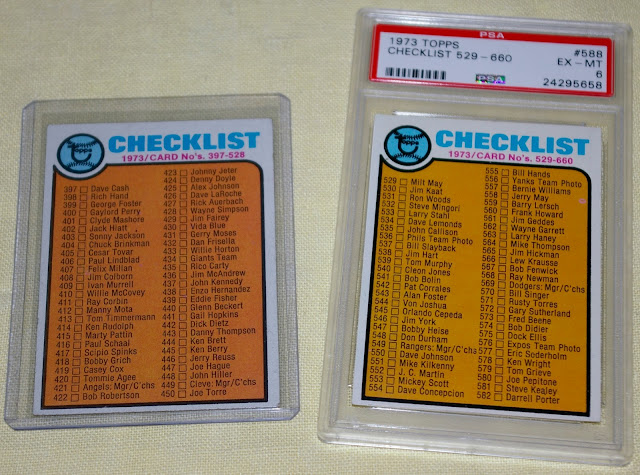 Surprisingly to me, these boring ol' checklists were a couple of the trickiest cards to land. The high-number checklist in particular is just silly. Even ugly, marked-up copies often sell around $10. I figured if I have to pay decent money for a friggin checklist, I'm gonna go all-out and get a nice clean one. And so I ended up with this graded one for about the price of a blaster. It's the only graded card currently in my setbuild and the costliest 73 for me to date, though it will be surpassed in that department once I buy the Schmidt, I'm sure. 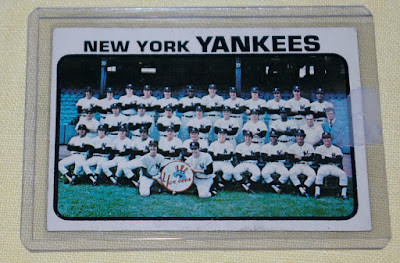 The Yankees team card was also tough to find at a reasonable price. I had some patience and won this one on eBay for about $5 shipped. 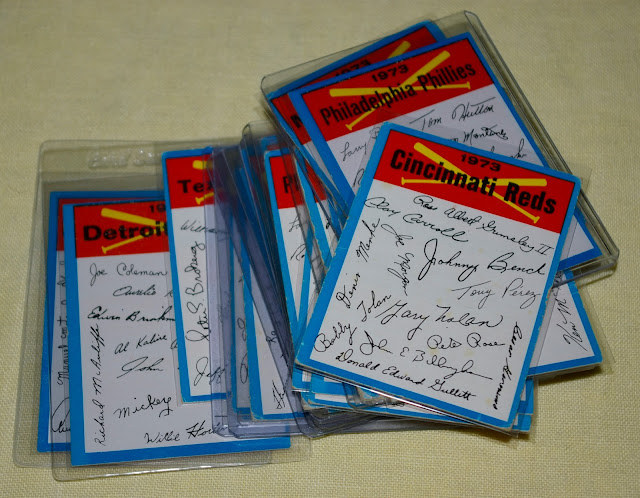 It was very satisfying to finally complete the set of team checklists. These little buggers can be deceptively hard to find (in contrast to the similar red versions from 1974). I would like to eventually upgrade the roughly half of these I own that are marked up on the back. The cheapest I paid was 50¢ each on Sportlots for some marked-up ones, while the most was $3 for the Reds on COMC, surprisingly elusive. 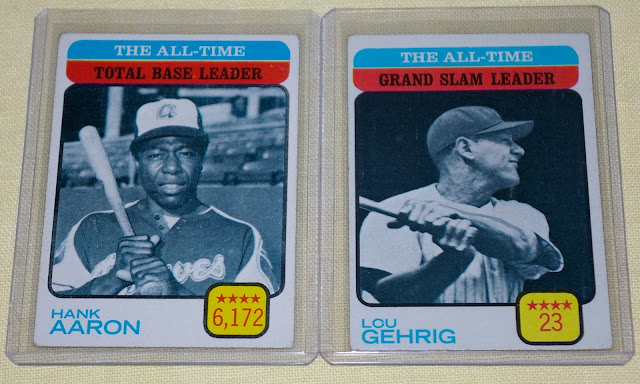 Here are a couple of the bigger "All-Time Leader" subset cards. I was happy to have my offers accepted on COMC that shaved off a couple bucks bringing them each to a very reasonable price.

Ah, my trio of Stan Bahnsen variations. Turns out I had the "big gap" version and the "small gap" but I was missing the corrected "no gap" version. Picked it up on COMC for 35¢ (and even that one has a minor border issue at the top.. Geez, why did Topps have so much border problems with this particular card?). There's still a 4th known variation that maybe I'll bother to add someday if I really want to be exhaustive. It's the one with a big left gap and no right gap. As you can see, mine (left) also has a small right gap, which is ultra mega rare and probably worth a few hundred dollars if I could get a couple 1973 Topps mastercollectors in a bidding war over it. 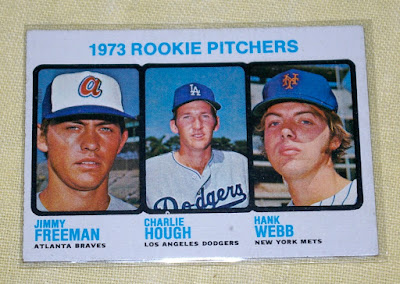 Finally for today, here's a Charlie Hough rookie. Or is it?! Nope, Hough had already been included in a 3-player rookie card in 1972 Topps, so this here is actually his second-year card. But being a high-number, it's generally more valuable than his actual RC. I lucked out and grabbed this one on eBay for just a couple bucks shipped.

So I'm at 99% complete, with only the Schmidt standing in the way of cardboard immortality (hey, Cardboard Immortality would make a good blog name-- someone out there thinking about starting a card blog should use that! "The Cardboard Agenda" would be a good one too). My plan is to see at next weekend's card show if my favorite dealer still has the copy he had at last month's show.. and if so, what kind of deal he could offer me for it. If that doesn't pan out, I'll just keep an eye on eBay, placing low/mid-level bids here and there hoping to luck out with one.

Have a great weekend, everybody.
Posted by defgav at 3:28 PM