Six weeks since the last card show.. I was jonesing to thumb through boxes of cardboard! This show delivered a satisfying fix. I spent $75, which is definitely on the pricey side for me, but no regrets.

I'm gonna skip ahead to the grand finale first, as the big card of the day for me was actually the last one I added to my lot. I had just previously amassed a stack of 60 cards from the 50¢ bins of my favorite dealer. Last month he had a Schmidt rookie under the glass, though it wasn't there today. It wasn't looking promising. As I was ready to pay for my stack, I asked if he still had it around. He wasn't sure but started digging around, and found it put aside with his other "do not sell" cards in his cashbox. With a little reluctance, he offered it to me for a decent price and we ended up agreeing on $75 for the Schmidt plus the 60 cards I dug out of his discount bins. I think that was a pretty good deal. Read on and see if you agree. 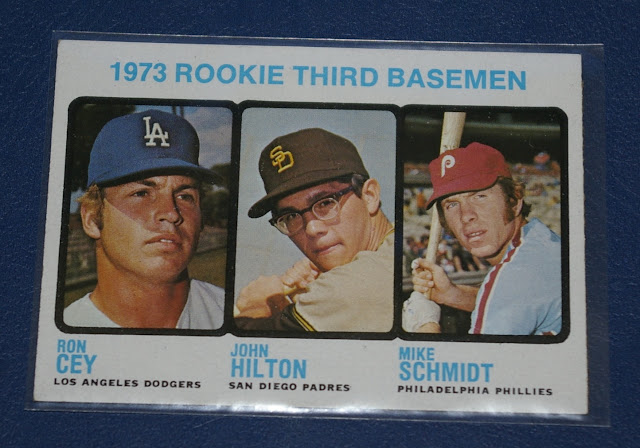 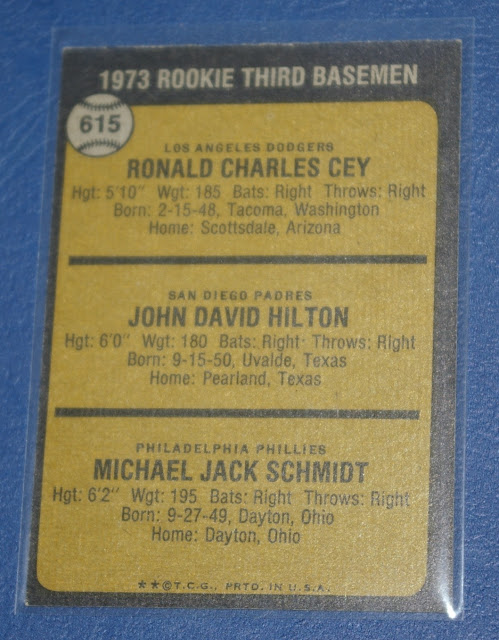 The centering on the back isn't as good as the front, but still solid overall. I even put it in a stack of other 73s just to double check it was legit (didn't want to get burned again after the first one I bought turned out to be a fake). And it checks out.

So YES, I have completed 1973 Topps! It's really a huge deal for me. It's the first set I've ever personally compiled in my life! (not counting tiny ~100-card sets.) When I was a kid, I bought a complete set of 1989 Topps from Sears or something, but that's the only complete Topps flagship set I've owned in my entire life. Until today. Now, "Own complete 1973 Topps set" becomes the first bulletpoint in my collector's resumé.

Now let's check out the rest of the cards I picked up moments earlier. 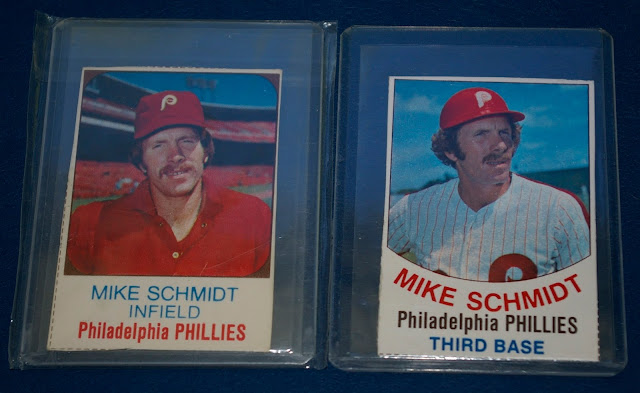 This pair of Hostess Schmidts must have given me good luck in landing the RC. 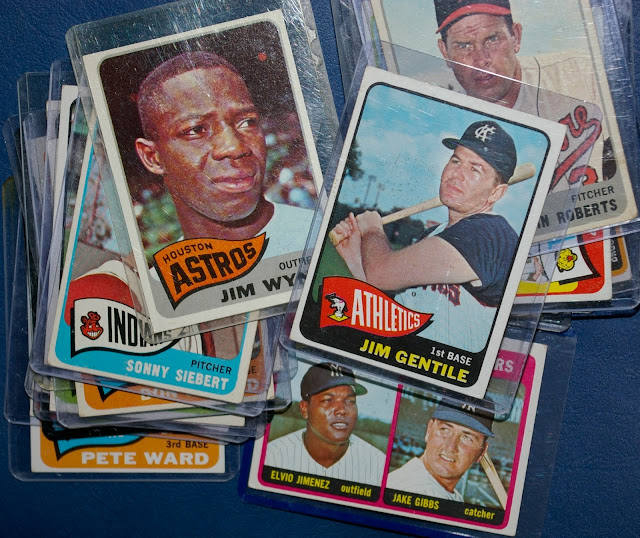 The guy had a surprising big cache of 65s in one of the bins that I excitedly dug into. I had an outdated copy of my wantlist, so I was able to put back about half which I already had, though was happy to pick up about two-dozen to put toward my setbuild. 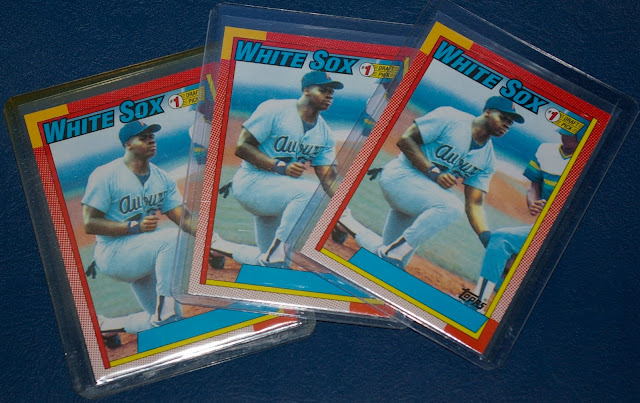 It was just a few weeks ago I showed off this Frank Thomas NNOF reprint that I paid >$10 for. So I was a bit chagrinned to find three of them in the 50¢ bins. Hell, I figured I'd grab these and flip them on eBay (or possibly trade if any of you guys wanna make an offer.) 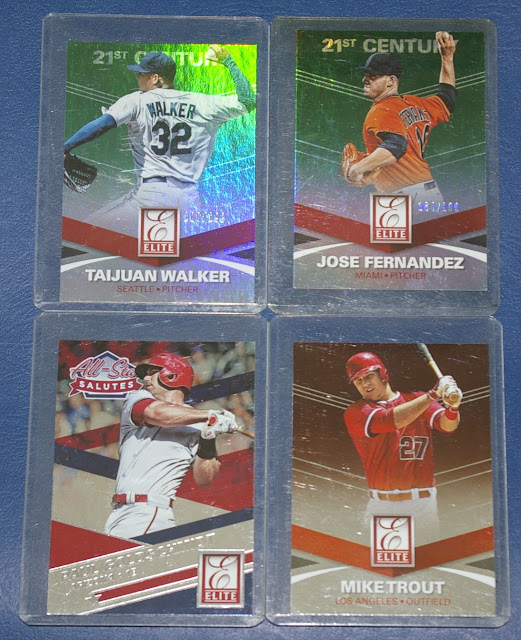 I think this set is 2015 Elite or something. The Taijuan and Fernandez are each #'d /199. The Goldy and Trout are pretty sharp.

A couple similar Piazzas. That's the first sample from that insert set I've seen. The one on the right is the glow-in-the-dark variation (that I love so). 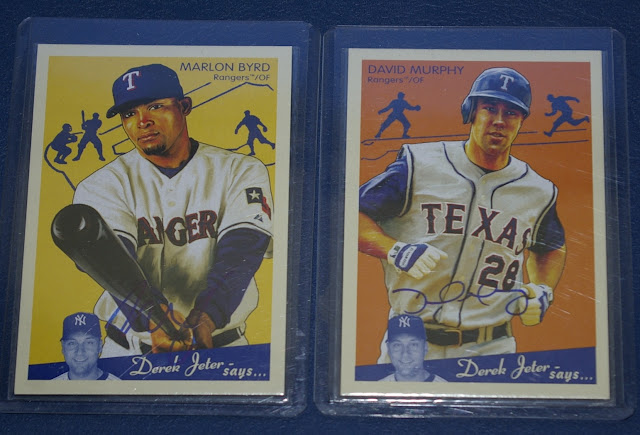 A couple certified autos, both Rangers, both decent names (esp. compared to the no-name guys you often find autos of in the discount bins). The autos aren't all that prominent, which is probably why no one had grabbed them up already, but check the back and it says "Congratulations!" These are both up for trade if you're interested. 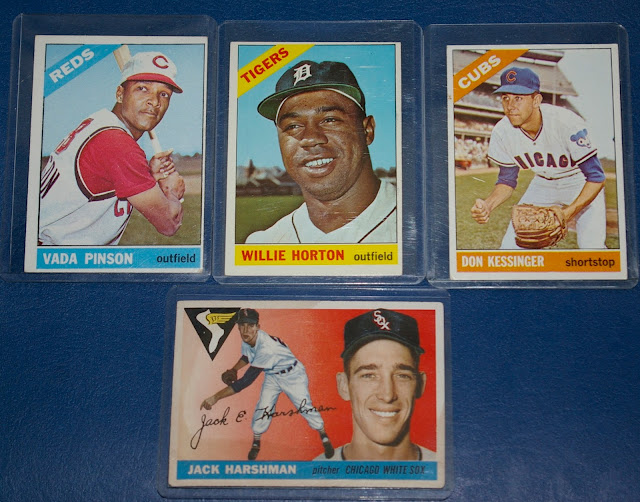 Here's some older vintage, including 3 decent names from 1966 Topps. The 1955 Harshman is already spoken for by a guy I'm working out a big trade with. 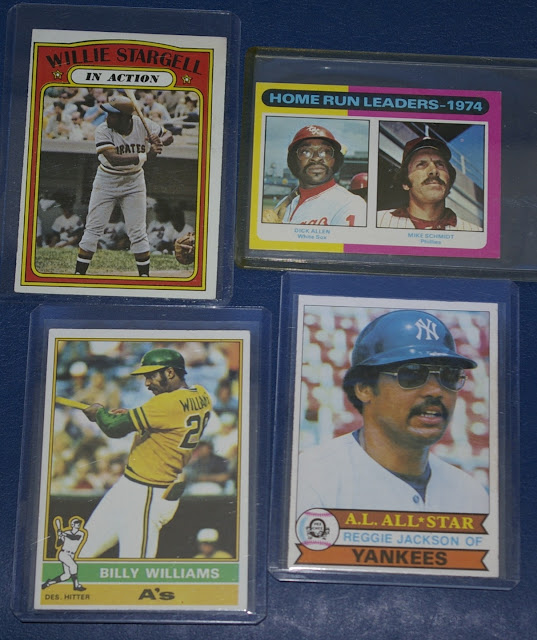 And here's some 70s vintage. Mike Schmidt makes yet another appearance, though I bought this 75 mini mainly for the Dick Allen half. How do I not recall ever seeing that 1976 Billy Williams before? And vintage OPC Reggies are hard to pass up. 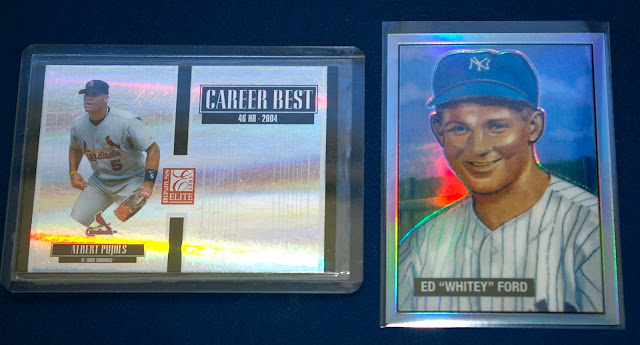 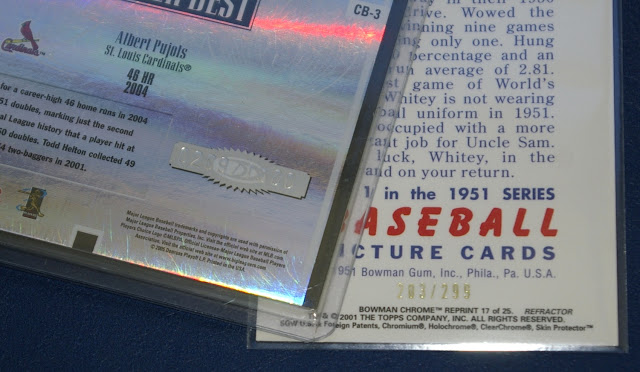 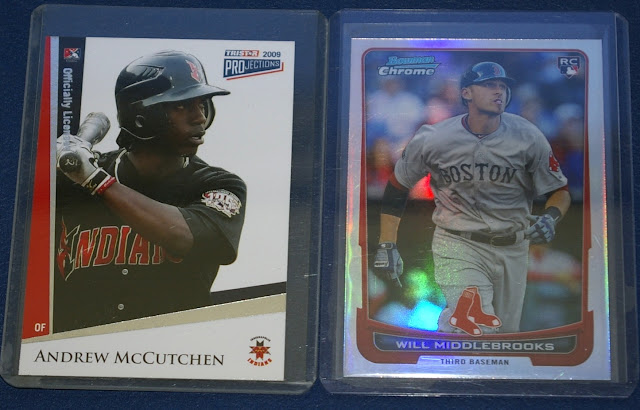 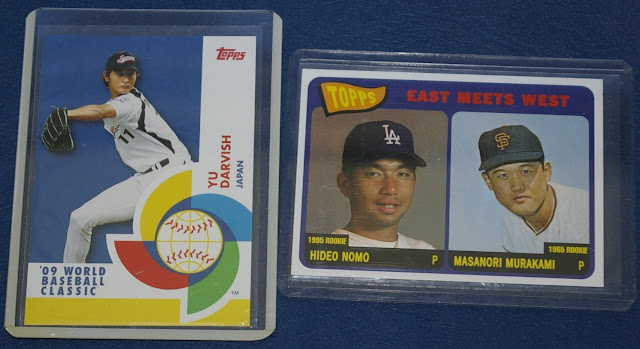 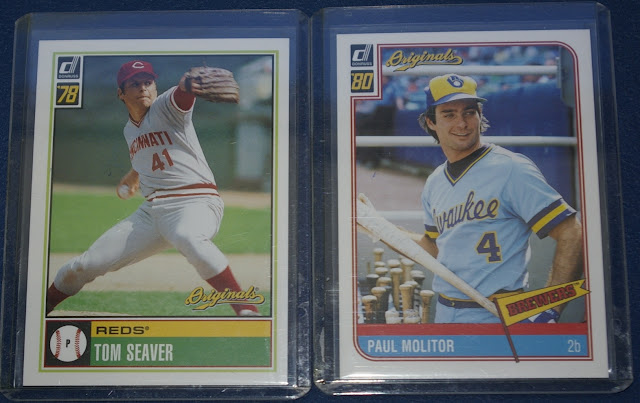 I love these "What If Donruss was putting out cards before 1981?" inserts from 2002 Donruss Originals. I ripped a few packs a while back and pulled a Fisk. Happy to add the Seaver and Molitor.

Apart from that, I picked up a few Cubs which I'll be sending off to P-town Tom, but other than that, not much trade bait today.

So there's my card show haul for September. I feel pretty good about it.
Thanks for stopping by!
Posted by defgav at 3:40 PM