Last December I went on a spree of buying cheap autographed index cards to make into auto sketch cards (see this post). But then my enthusiasm for the project waned for no reason in particular, and I found myself with about a dozen boring signed index cards just sitting around.

Then the other day I was rejuvenated to use some of the index cards to create something neat (what you're reading now is actually a sequel to another post that's still a draft). And so, that's what I did! I decided not to go the sketchcard route this time, and instead whip up designs in Photoshop to print out and make into cut-autograph customs.

I have a love/hate relationship with physical customs. It sure is fun to create a "card that never was" and hold it in your hand or slide it into an empty slot in a page. On the other hand, I believe customs (and evil twin: counterfeits) will destroy the hobby within the next decade or so. Every time you print out a card yourself, you're hurting the hobby as we know it. I've already given my Chicken Little spiel before, but yeah, when I think about it too much, it definitely makes me want to sell off the big-money cards in my collection while I still can get something for them. 3D printers will be spitting out authentic-looking Ty Cobb bat knobs before you know it! Don't waste your money on a 1/1 today that some kid will be able to create an infinite supply of perfect copies of in a few years. Topps is smart to be diving into the "digital cards" market and try to build something there, because real cards are facing serious danger.

Ok, this post has taken a turn for the dystopian-- let's get back to fun baseball cards! Whee!

The 3 cards I made that I'll be featuring in this post are guys who are well-known to baseball fans. The quirky catch is that they all quietly spent a forgotten year on the Padres. As a lifelong Friar fan, I got a kick out of creating autograph cards featuring them in their San Diego duds, as there's little chance a real card manufacturer ever would. 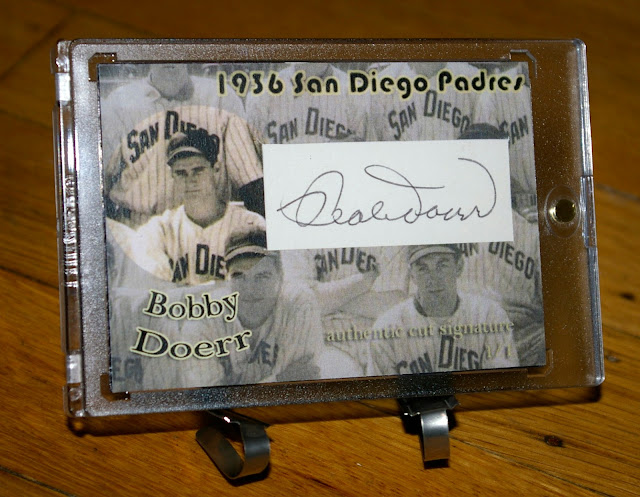 Bobby Doerr began his professional career playing for the Hollywood Stars of the Pacific Coast League in 1934 and 1935. He was still with the team in 1936 when they moved to San Diego and changed their name to the Padres. Also on that inaugural SDP team was Ted Williams, with whom Doerr would be close friends for many years. The two were signed by the Red Sox in 1937. As with Williams, Doerr would spend his entire major league career with Boston. Dependable at the plate and in the field at second base, he was a 9-time All-Star. Doerr missed the 1945 season while serving in the Army during World War II. A spinal problem later cut his career short at 33 years old, but his legacy was impressive enough to warrant induction to the Hall of Fame by the Veteran's Committee in 1986. The Red Sox would go on to retire his number, 1. Playing during Boston's notorious dry spell, Doerr never won a World Championship, though he did bat .409 in his only postseason action, the 1946 World Series loss to St. Louis. He returned to the Fall Classic in 1967, this time as first base coach with the Red Sox, and is also credited with tutoring Carl Yastrzemski as unofficial batting instructor during his triple crown season. Doerr went on to live a very long life, beloved by baseball fans for his generous, approachable nature. 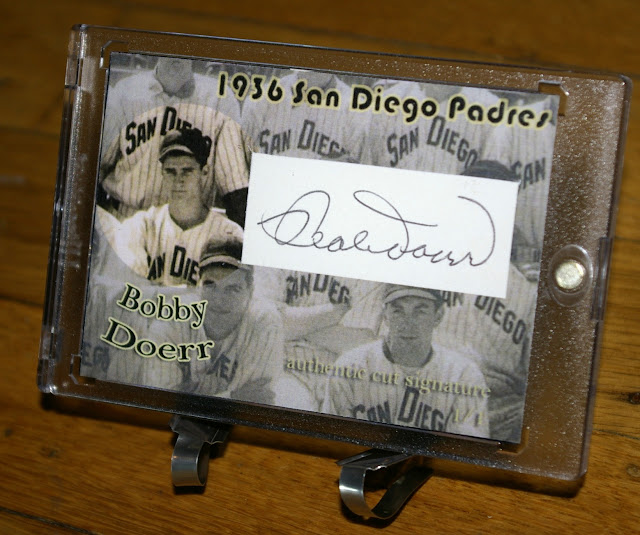 As for the card, this team photo was all I could find from Bobby's year in San Diego. Still, I think the card turned out pretty good! BTW, there's a nice documentary called The First Padres about the PCL Padres that I just watched last night, inspired by researching for this card. 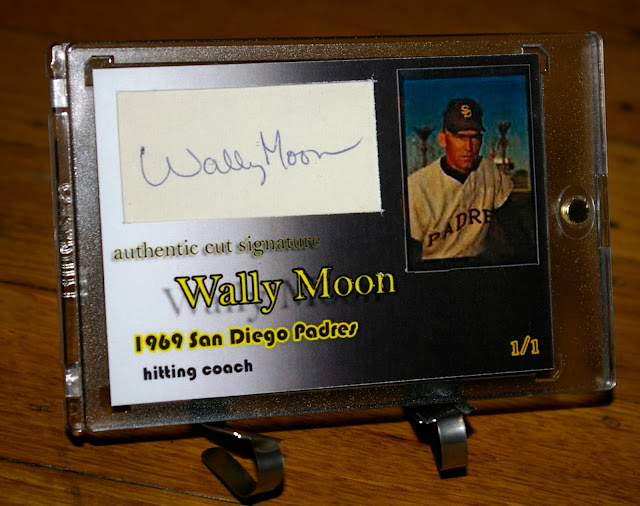 Wally Moon came up with the Cardinals and was the National League Rookie of the Year in 1954, easily beating out fellow rookies Ernie Banks and Hank Aaron. He batted .295 or better for his first 4 years in the league, but after a down year, was traded to the Dodgers before the 1959 season. After adjusting to the dimensions of Los Angeles Coliseum thanks to his friend Stan Musial, Wally became known for his "Moon shots" over the high left field screen. He won a Gold Glove in the outfield in 1960, was twice an All-Star, and a part of three World Series Champion teams (1959, 1963 & 1965). In 1969, he was a batting coach for the San Diego Padres during their first year in the NL. He's still popular among baseball fans today, with his impressive unibrow giving flavor to photos and baseball cards of the 50s and 60s. 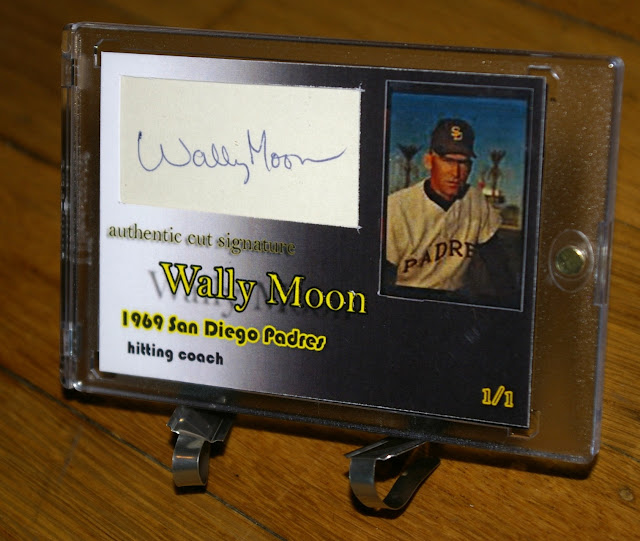 As for the card, it's not my best design, I'll admit. I was a little disappointed with the only photo I could find from his year as a coach in San Diego since it's pretty small and low resolution. But I'm glad I didn't have to resort to photoshop trickery, and at least you can make out his trademark unibrow! 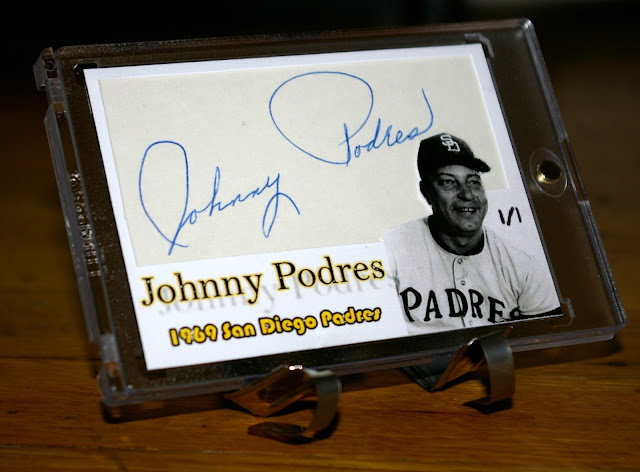 Johnny Podres was a Dodgers great who helped the team win World Series championships in 1955, 1959, 1963 and 1965. The pinnacle of his career was Game 7 of the 1955 World Series, shutting out the Yankees to give Brooklyn their first (and only) title before the team moved to Los Angeles. Though often overshadowed by the likes of Sandy Koufax, he led the National League in ERA in 1957 and winning percentage in 1961. Near the end of his career, he spent a couple season with Detroit. After a year out of the game, Podres came out of retirement to pitch for the fittingly homonymic Padres during their inaugural season in the NL. While his 5-6 record in 1969 might not seem impressive at first, it was one of the highest winning percentages on a team that lost 110 games. After his playing days came to an end, Podres was a respected pitching coach for many years, helping shape the careers of such players as Frank Viola and Curt Schilling. 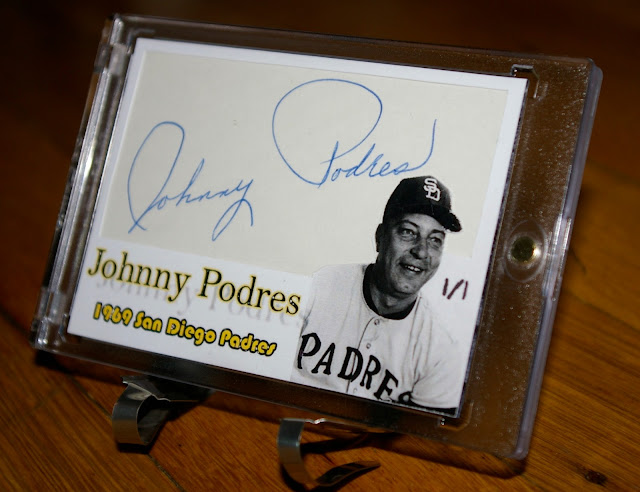 As for the card, it came out pretty well. Johnny's signature takes up a lot of space, and I had to chop off the "Authentic Cut Signature" bit to get it to fit. Never would I "pull a Topps" and make a cut auto that chops or obscures any part of the autograph! I also needed to hand-number the "1/1" part due to expanding the signature window. I know the numbering is silly, but I like it. Now, don't any of your counterfeiters out there copy these! LOL 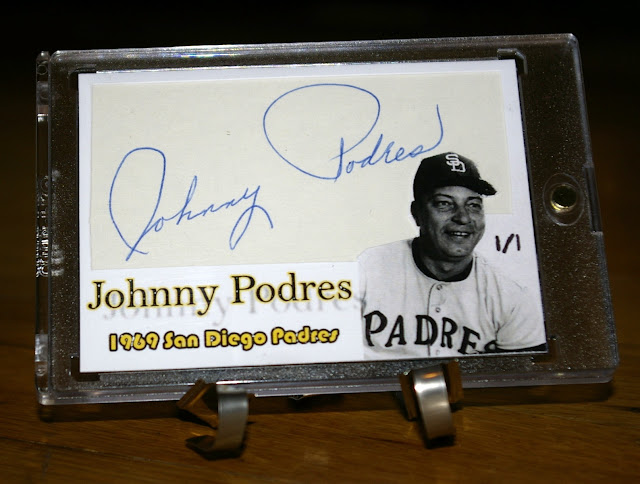 So there you have it, my latest batch of customs. I'm pretty happy with them! What do you think, sirs?
Posted by defgav at 4:01 PM