A box of 2016 Topps Museum Collection

If you've been following this little saga, Topps asked me to be a dear and stop selling custom cards that happen to bare a striking resemblance to Topps brand cards. I complied and they showed their gratitude by sending me a box of 2016 Museum Collection. These things sell for around $180, so it's definitely a generous gesture, and very appreciated.

Let's rip this puppy and see what's in there. 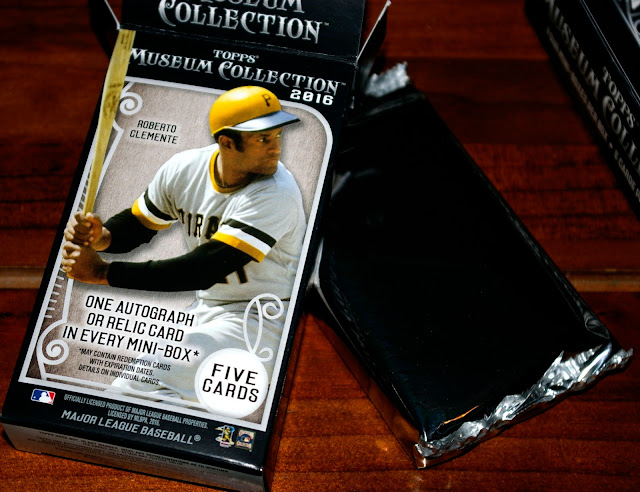 There are 4 packs (mini-boxes) in a hobby box, each containing a hit and graced on the outside by the legendary Roberto Clemente.

The Reggie Canvas Collection is kinda cool. The 3 base cards don't do much for me. As for the hit.. 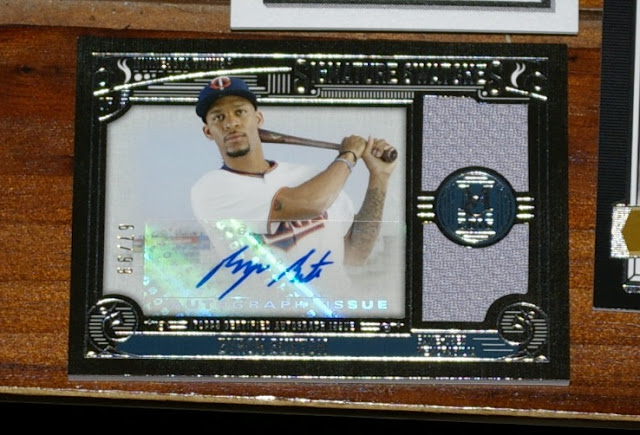 (Sorry that the foil text on a dark background makes these hard to read in photos/scans.) Byron Buxton auto/relic 67/99.. Nice. He's a highly touted top prospect who has yet to cash in on his immense potential on the major league level, but you gotta believe the Twins will give him ample opportunity. Off to a slow start this season, but hopefully he comes around. 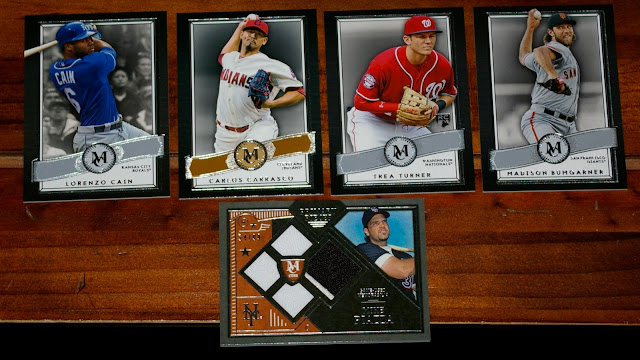 Nobody I really collect in the base cards here, but that's a nice quad-relic... 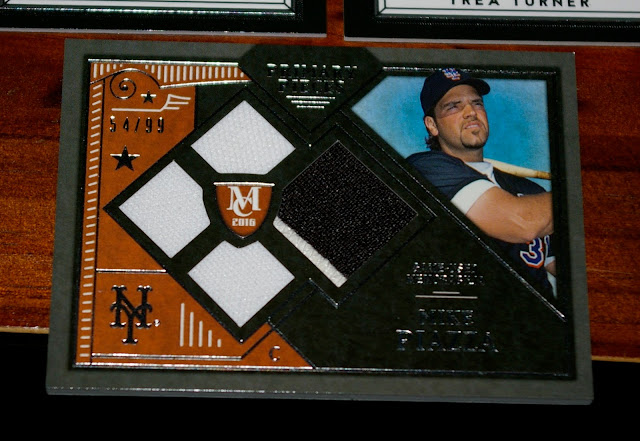 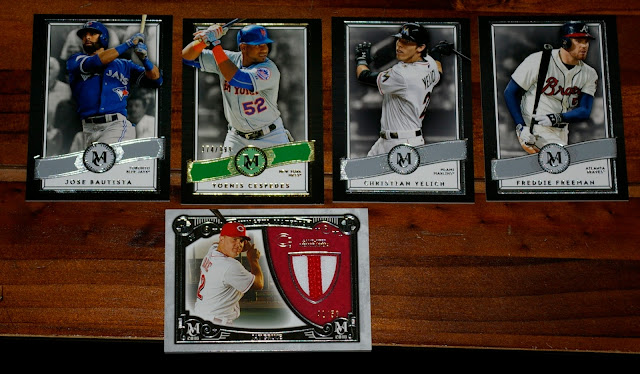 The non-hits are highlighted by a Yoenis Cespedes parallel #'d 174/199. And for a better look at that relic... 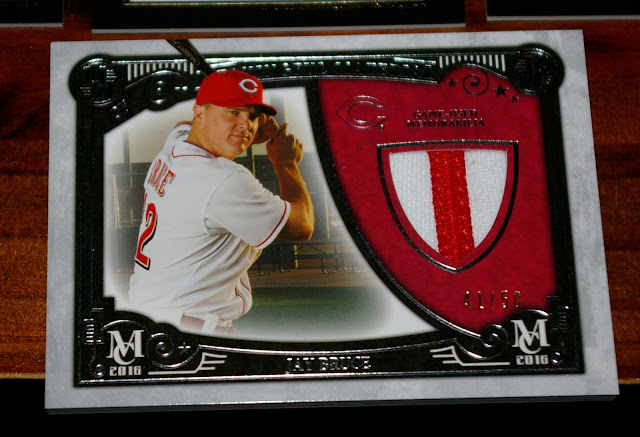 Jay Friggin' Bruce. Gotta be a sad trombone whenever you pull a hit of him these days, even if you're a Reds fan. Too bad, too, as that's a great looking relic, with that badge/shield shape and the stripe going right down the middle. #'d 41/50. If this were like Trout or Harper I'd be crapping myself over it. 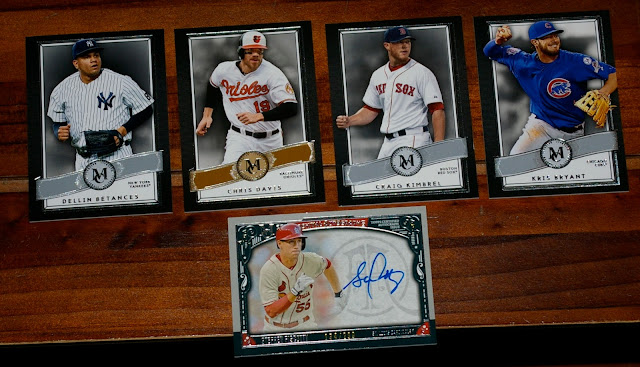 Base cards highlighted by a Kris Bryant. Looks like every pack has a parallel, though the bronze parallels are the most common and unnumbered, represented here by Chris Davis. 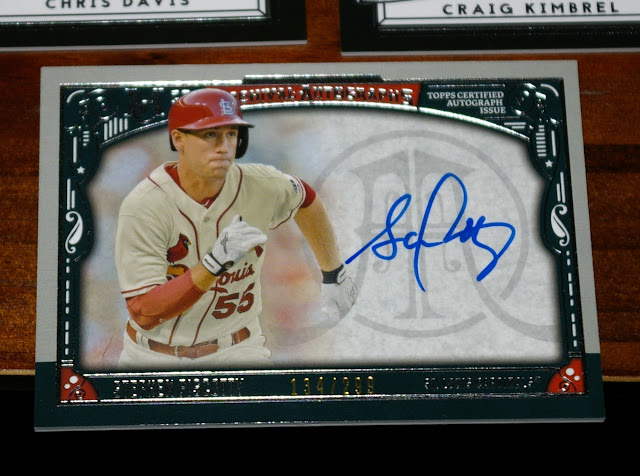 My promised on-card auto is Mr. Stephen Piscotty, not a bad pull. #'d 134/299. He had a nice partial season debut last year and is doing fine so far this year, patrolling right field for St. Louis. I recently drained all my decent Cardinal tradeable cards on Madding to score a Michael Conforto auto, so this is a nice hit for me. It very well may end up with said Portland neighbor one of these days, but for now I'll enjoy it as one of the better cards from this box that I was magnanimously gifted directly from Topps.

So yeah, not a terrible box, but no huge mojo hits nor all that impressive as far as guys I personally collect, but still a fun box to bust, especially seeing as I didn't pay $180 for it. Not to look a gift horse in the mouth (again, I'm very grateful for it!), but this box could probably be considered a dud, seeing as none of the hits would be likely to sell much above single digits on the secondary market. The lowest numbered card was the Jay Bruce #/50; pretty high for a box of this type of product. But with my luck ripping cards, it was to be expected. Maybe someday I'll pull an auto of Koufax, Trout, or Harper or something like that, but not this time.

Let's see.. the untouchable/PC cards for me here are the Reggie canvas, Piazza relic, and Bryant base.. otherwise, I could be talked out of these, so check out my wantlist and get in touch if you'd like to propose a trade for anything.

Thanks for reading and big thanks again to Topps for the high-end gift!
. . .
Contest reminder.. I'm running a little "handwritten post" contest for my fellow bloggers this month. If you've got a blog and want to take part in the contest, get your handwritten post up by the end of April (Saturday night). Don't forget: to be entered in the contest, you must post a comment on this post with the URL to your entry.

Speaking of which, another guy who got a box of 2016 Museum Collection is Sport Card Collectors, and he's got a contest going to give away one of the hits from his box. So go check it out and enter. SCC just won himself another contest! It's really ridiculous how often his guy wins stuff, as I've noted here before. But he also runs a lot of contests, so I guess it's good karma coming back to him.
Posted by defgav at 3:30 PM