The Sandlot premiered in theaters nationwide 23 years ago today, April 9, 1993. That's a good enough excuse to post this today!

If you've been reading the blog for a while, you may recall I've made some custom cards based on the movie. Back in January, I went on a spree of sending out Through-The-Mail autograph requests, and among my requests were 3 actors from the cast. Unfortunately I struck out. But I'm gonna show off the unsigned customs anyways, as a few of you out there might get a kick out of them.

Mike Vitar starred as Benny "The Jet" Rodriguez. For a long time, he was known as a dependable signer through his PO box. But last Halloween, he and another firefighter (yeah, he became a fireman when he grew up) beat up a guy over an argument or something, and he might be looking at prison time. He's apparently closed his PO box, as this request came back with an undeliverable/return to sender label.
Bummer! I was really happy with how these three 1972 Topps-style Dodgers cards turned out. Looks like it got damp somewhere along the line, as you can tell the black ink smeared.

If you have a working address to send Mike Vitar fanmail, please let me know! I'd love to give it another shot getting these signed.

Next up is cutie Marley Shelton, who played Wendy. I made a 1997 Leaf Signature type card using a lovely relatively-recent photo, and also included one of the other Sandlot cards I made a while back. Again, my envelope came back with the dreaded yellow postal label of death.

If you have a working address to send Marley Shelton fanmail, please let me know! 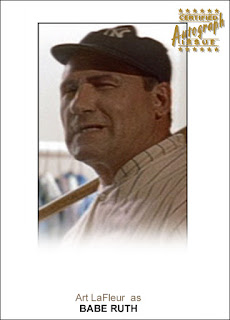 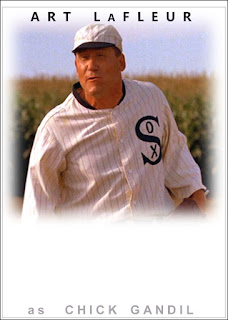 Finally, here're a couple cards for Art LaFleur. He played the Babe. Art was also in Field of Dreams, and so I made a custom for that one as well. Now, these have not been returned-to-sender.. so I suppose there's still an outside chance they'll come back signed someday, but it's been several weeks at this point, so I'm not holding my breath.

That's it for today. Thanks for checking out the cards.
Posted by defgav at 3:03 PM