I usually group incoming trade packages into a weekly roundup, but when I receive a card from you with an eBay value in the neighborhood of $100, damn it, you get your own frickin' post!

To set the scene for this epic trade, way back in December of 2014 I pulled a Michael Conforto redemption (/149 purple parallel) from a box of 2014 Panini Prizm Perennial Draft Picks. While I was correct in my assertion that it was the probably the best pull of the box, at the time he was still just another prospect making his way through the minors. I previously had a couple frustrating experiences getting mail from Panini due to them requiring a delivery confirmation signature, and ever since then I've been reluctant to fuss with redemptions, and would rather sell or trade them away for somebody else to worry about. So I sat on the unredeemed card for a few months, hoping a Mets fan would take it off my hands in trade. In July 2015, with the expiration date creeping up, I put it on Listia and found a guy to buy it for 55,000 credits, which really isn't much, especially with the skyrocketing inflation that plagues Listia.

Just three weeks later, Conforto got called up and surprised everybody with his impressive play and ended up being a key component of the Mets' pennant winning stretch run. His card prices took off and I was left kicking myself. I should have redeemed the card myself, or at least waited a month before I sold it and gotten exponentially more for it.

Since then, I've sort of started collecting his cards out of spite, to be honest. I had been hoping to one day land a sweet Conforto auto to fill the void in my soul created by letting the redemption slip away.

So when one night last week Kerry from Cards on Cards tweeted that he was lucky enough to pull a Conforto auto from a pack in his recent Loot Locker package, I drunkenly excitedly expressed my interest should he be looking to move it. He was open to listening to offers for interesting Red Birds cards in exchange, so I dug deep and was able to put together a solid package highlighted by a 2004 Topps Retired Ozzie Smith auto, and lucky for me, Cardinals fans are powerless to turn down the Wizard. 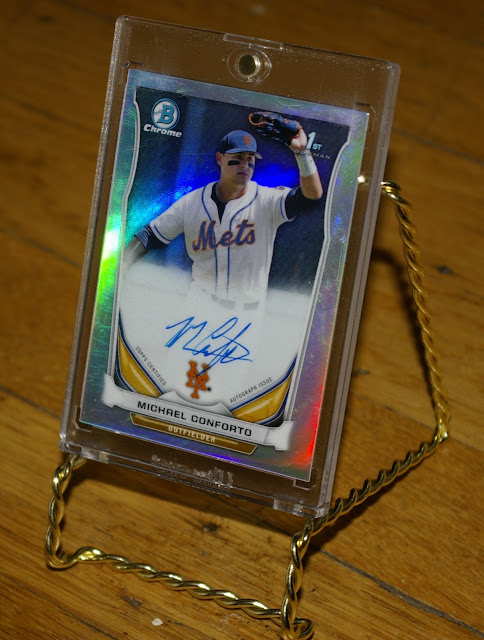 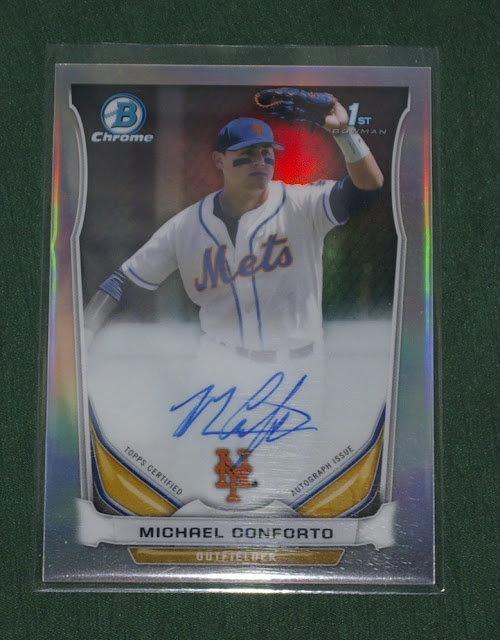 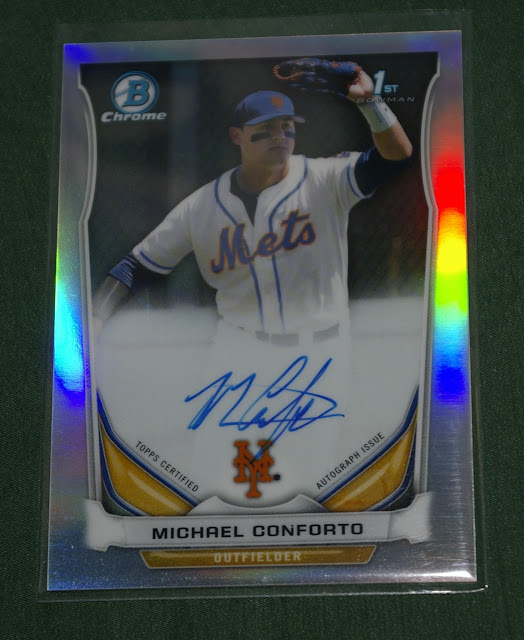 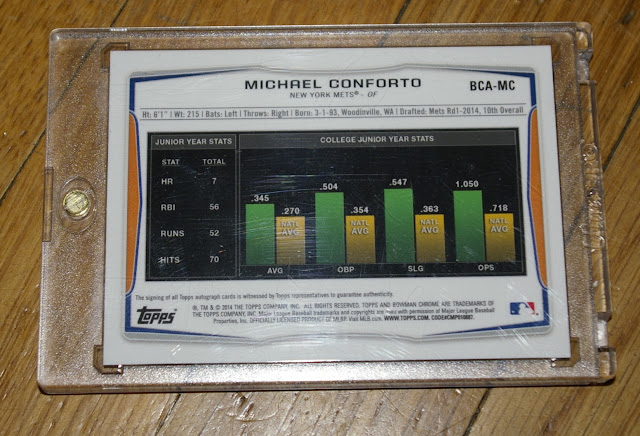 Love it! As you can see, it's the refractor version, though it's unnumbered (these are typically #'d /500). These Conforto cards are weird because while a 2014 Bowman Chrome card, they weren't actually included in that product and instead packed out in 2015 Bowman Chrome. Were they purposefully "held back" by Topps? Was Conforto late in getting the cards back into Topps' hands, and so they decided to squeeze them into a product better late than never? I don't know, but whatever, I'm very happy to give this card a place in my collection.

I can now hear the name "Michael Conforto" and smile in the knowing that I've got this sweet-ass card, rather than how I used to wince when I heard the name, a bitter reminder of the card that slipped away.

It wasn't easy to part with the 2004 Retired Ozzie, though. As I've mentioned many times, completing the 2004 Retired auto set is my #1 collecting goal since returning to the hobby. I was at only needing 3 more cards, though with letting go of the Ozzie, it's now up to 4 more to go. Since I ultimately was going to want to upgrade to a /25 refractor version, I figured I could take the step backwards and just hope a refractor Ozzie pops up one of these days and I'm able to land it, though I know that day may never come. Still, though, no regrets! (Fingers crossed Conforto continues on to a solid major league career.)

And as if the Conforto refractor auto wasn't enough, Kerry surprised me by loading up the package with a bunch more cool cards for me: 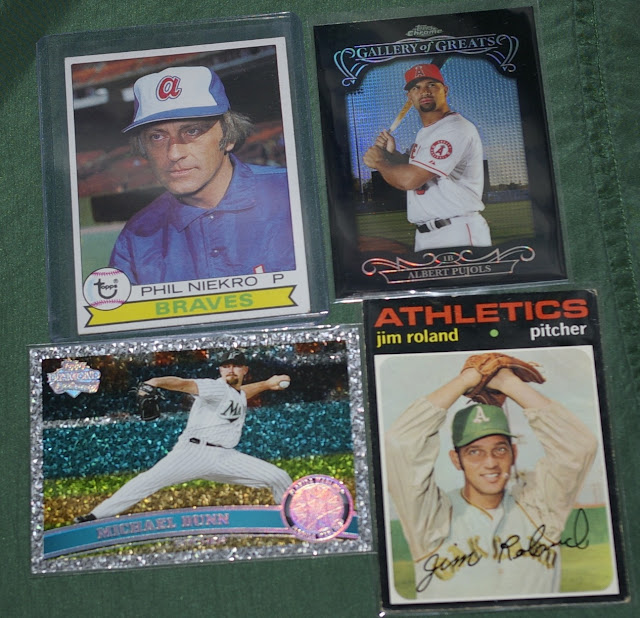 Some incredible PC and setbuilding needs for me. The '71 is an elusive high number. 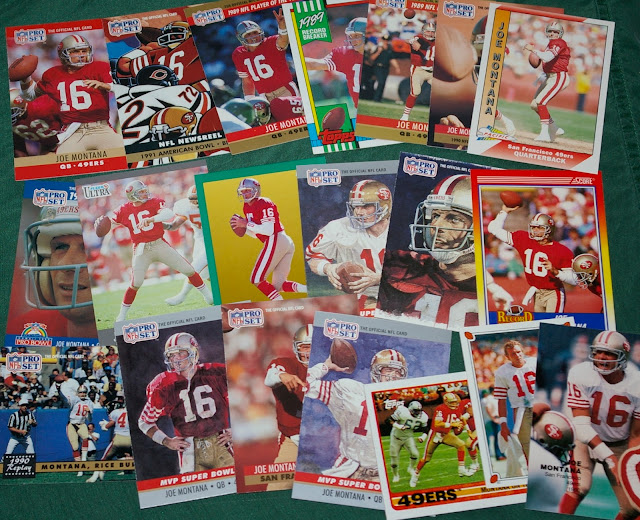 Check out this great Joe Montana lot! While my football fanhood has waned over the past few years, I've still got a soft spot for superstars from my youth, so these are awesome. 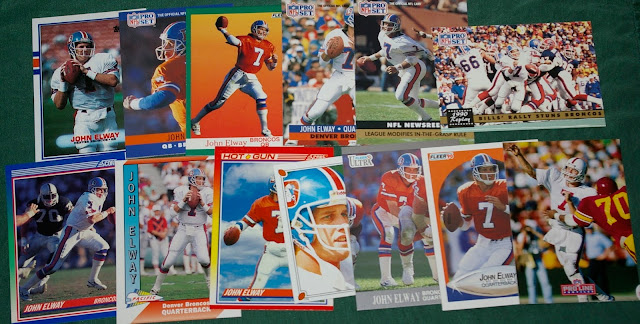 From one all-time great quarterback to another, here's a bunch of John Elway cards to close out the package.

Again, thanks so much, Kerry! This has gotta be among the best trade packages I've ever received. I'm in your debt and will be keeping an eye out for more Cardinals to send your way. Hopefully one of these days we can meet up for an in-person trade and/or grab a beer. (We both live in Portland and work a few blocks apart downtown.)

Thanks for stopping by and have a great weekend, everybody.
Posted by defgav at 3:11 PM