No, I'm not talking about stone dishware! I'm talking about printing plates of Guys From Granite, which is what I call my minicollection of pro ballplayers who, like myself, attended Granite Hills High School. I've picked up a couple recent additions, so I figured I'd show them all off in a post. 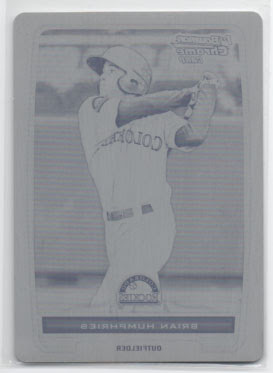 Here's my latest acquisition, Brian Humphries 2012 Bowman Chrome black printing plate. Last year I acquired a near-complete rainbow of this card from a Rockies collector, missing only the 4 plates. Well, now I've knocked one of the plates off the list. You could say I've got something of a standard rainbow now, seeing as I've got one of each type of parallel available, though I'd love to go for a master rainbow someday, hunting down the 3 remaining plates. It probably won't happen, but never say never. I think black plates are probably the coolest color, so this was a nice one to land, plus I was the high bidder with the winning bid comfortably in single digits.

As for Brian Humphries the player, after being cut by Colorado last spring training, he played very well for an independent team, setting career highs for batting average (.310), homers (15), and RBI (58) in 98 games. His 197 total bases were third-best in the American Association. I was hopeful his performance would help him latch on with another major league franchise, but no such luck. This offseason, he was acquired by another team in the American Association who seem pretty happy to have him. So that's cool, even if I'm sure he'd love to get back on track to crack the bigs someday. But yeah, I'll be rooting for him to have a great 2016 season with the Fargo-Moorhead RedHawks.

Next up, another guy named Brian.. 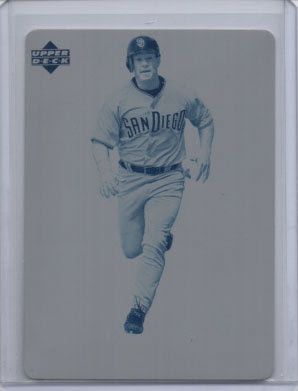 Here's Brian Giles, the Granite grad who had the most major league success. This is my first plate of his, bringing it home a month ago for about the price of a blaster (a little more than I would have liked to have paid, but oh well). I believe it's from 2006 Upper Deck Future Stars. Cyan is the 2nd best color to get after black. Plus it's a Padres card, always a bonus in my eyes. I've got a pretty legit B-Giles collection going, with several autos and relics among the 100+ different cards, but I believe this is my first 1/1 for that PC. 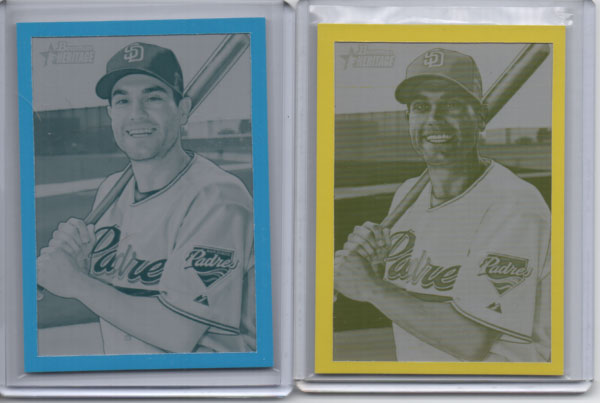 Keeping with the Giles Brothers, howbout Marcus Giles? Yep, I've got a pair of Marcus plates for the same card, 2007 Bowman Heritage. I got them last year.. I believe winning an auction for one, then picking up the other on COMC to complement it. Funny thing Bowman did with their plates that year was put a color border sticker on them. Ok, whatever. (Not sure why my scanner made a bunch of lines in the yellow plate, yet the blue one scanned fine.. Crap like that is why I usually photo cards rather than scan them.) Again, it's a Padres card, which I like, and it's just a great looking card, with Marcus donning the uniform of his hometown team, big smile on his face. Sadly, his stint with San Diego didn't go as well as this spring training shot would seem to optimistically predict, and his career would come to an abrupt end after the season. 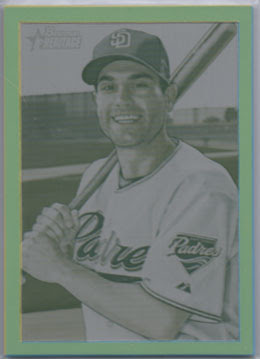 For fun, here's a composite of both plates combined via the magic of Photoshop. It really is a pity there aren't green printing plates, don't you agree? lol

And so, there you have it, all the Granite plates I've currently got.

On the subject of Guys From Granite, I want to give a quick shoutout to Travis Taijeron who had a heck of a spring training and led the Mets' big league camp in several offensive categories. (I don't own a printing plate of his yet, though there is one on eBay overpriced at $100 with no Best Offer option.. lame.) Looks like he's starting the season in AAA but the odds are good that at some point this year, he'll get called up and become the 8th guy from my school to play in the majors. So I'll be rooting for him to continue his hot hitting. And I'm hoping he gets some more cards too, as his only mainstream cards right now are 2012 Pro Debut & 2012 Heritage Minors. Would love to see him sneak into a Bowman product this year and tempt me to rainbow it.

Thanks for reading!
Posted by defgav at 4:09 PM