Blurring the lines between contest winnings and trades

I seem to have settled on a weekly trade roundup post every Tuesday or Wednesday. Maybe Monday would make more sense, but I typically fall behind with blog reading over the weekend and then end up spending my free time Monday trying to catch up, so often I'm unable to get a post of my own off on Mondays.

Let's get going with this week's roundup...
It was just about three weeks ago that I showed off some cards sent to me from Jeff Jones (with the Jedd Gyroko auto Christmas Card being the big highlight). I figured Jeff was just starting up another blind trade, and so I scrounged up a return bunch of Braves soon thereafter. But then I realized that what Jeff sent was actually my prize for being a winner in his Super Bowl contest. So I had actually begun a new trade circuit rather than completed an old one. Rather than simply accept the cards I sent as a "thanks for the contest" gift (which would have been completely fine), Jeff was quick to shoot another batch of cards my way. Nice guy! 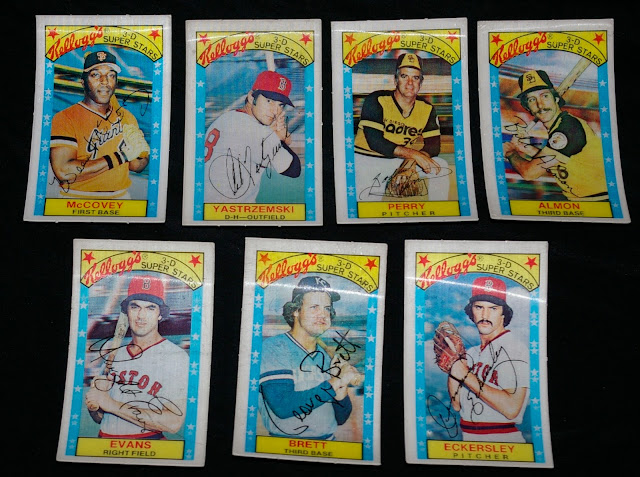 Check out this great lot of 1979 Kellogg's! A bunch of guys I collect in there. 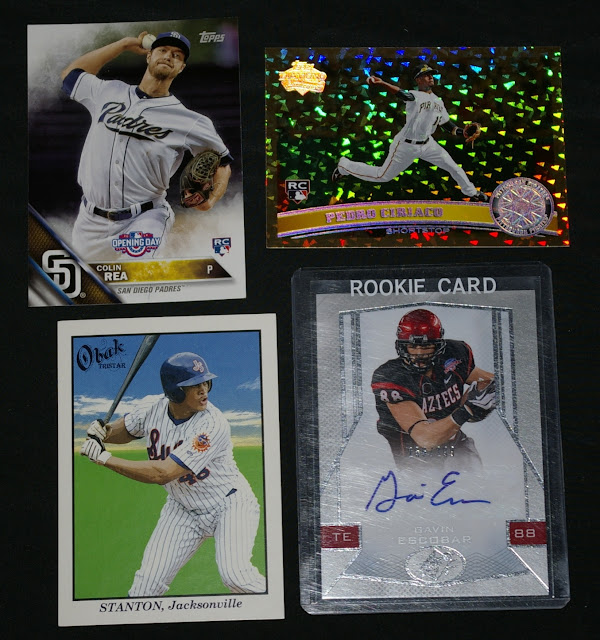 Colin Rea made the club after a solid spring training, but that's all I really feel like saying about the Padres right now. I caught an inning or so of their opener against the Dodgers and it was painful. Looks like it's gonna be a long, depressing season for San Diego fans. Again.

Also included here is another 2011 Topps parallel for my frankenset, an awesome minor league Giancarlo, and BOOM a Gavin Escobar auto #'d /299, plus it pictures him in a SDSU Aztecs uniform with logos left intact.. nice!

Next up..
Fuji was a lucky winner in my big 700th Post contest a while back. He was so happy with the prize package, that he decided to surprise me with a mailing of cards to say thanks. That's some cardsphere generosity, right there! He obviously didn't have to do that, but I'm not one to turn down cards. 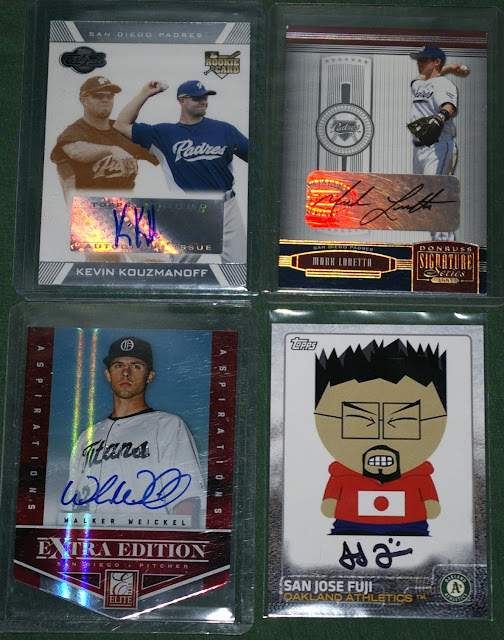 This quartet of autos kicks off the package with a bang. Love the Kevin Kouzmanoff auto. His might be my most impressive passive PC, meaning I've accumulated a pretty sweet Kooz collection without really trying.
Mark Loretta is another Padres fan favorite guy.
I had to look him up, but Walker Weickel is a big right-hander the Padres drafted out of high school in 2012 (55th overall) who has been creeping his way up through the minor leagues with mixed success.
And of course, a Fuji auto, this one in the style of 2015 Topps. These are always cool to get, though I must admit it's a dupe for me. Would it be weird to send out another blogger's personal card in a trade package? LOL. Maybe eBay? 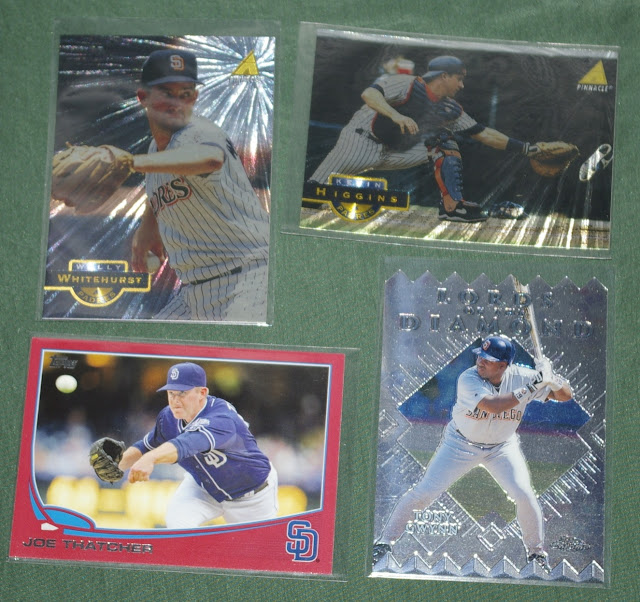 Here we've got a couple neat dufex cards, a Target parallel, and a Gwynn diecut. 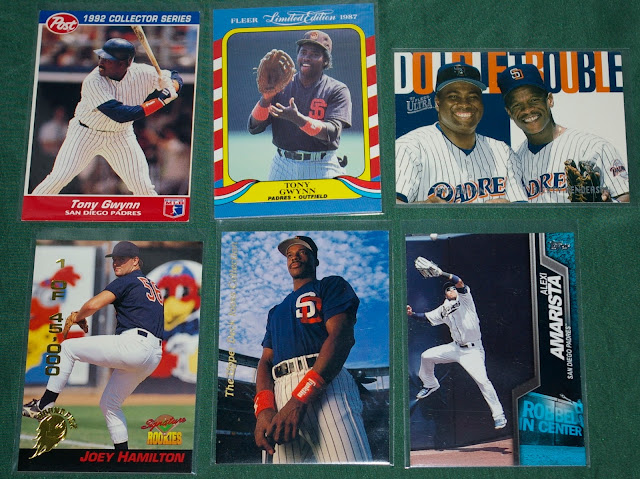 And some more Gwynns and other Padres of the past and present. That's a cool looking McGriff I don't think I had yet.

Here's a funny one. I recently won a contest from Sport Card Collectors (remember the Game of Thrones Hobbit 1/1 art card).. well, soon after that, SCC surprised me with a "thanks for winning my contest" bonus PWE! Ha, ok, maybe that wasn't the purpose of it, but that's what it felt like. Maybe it was a consolation prize because I came in 2nd in his subsequent contest. Can you imagine if I won two of his contests back-to-back in such a short time span? He might have to lay a lifetime ban on me! Haha, no, what kind of prick would do something like that? 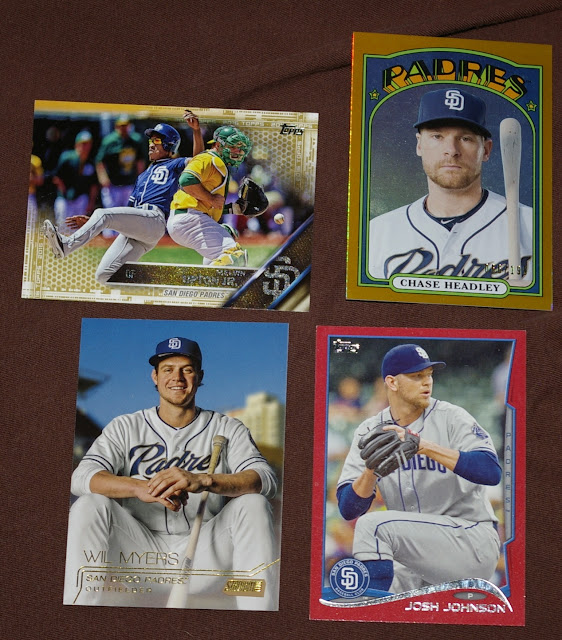 This tight 4-card blast featured a gold theme to it, with 3 gold parallels, plus a red one. I think the Wil Myers is my favorite here, though the Headley #'d /199 is pretty sweet.

Finally for today..
This one doesn't have anything to do with a contest. A Darryl Strawberry supercollector named Eric found out about the Darryl cards included in my Simpsons custom set and he got in touch to inquire if I had any other Strawberry customs kicking around he might be able to procure. It turns out I did have a spare magnet card from a while back. Eric was down for that, and we quickly agreed on an easy trade. 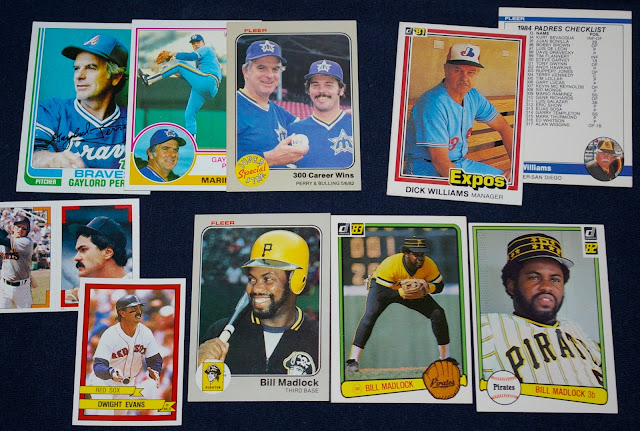 Some top guys I collect here, with most of these being needs for me.. Gaylord Perry, Dick Williams, Dwight Evans, and Bill Madlock. 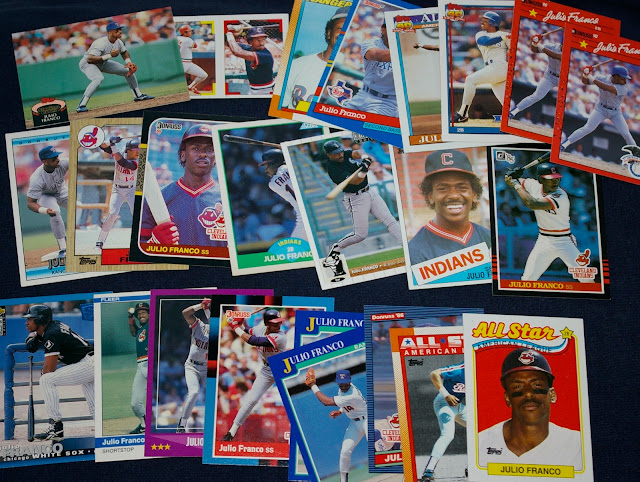 So many Julio Franco cards! I must have cracked 100 different cards by this point. I need to sort out all I got and weed out dupes. 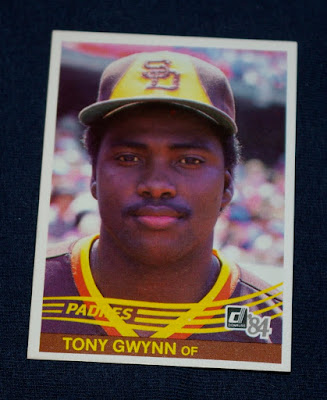 And we close with the main card of the trade.. the elusive 1984 Donruss Tony Gwynn. This may have been the final card I was missing from Tony's mainstream/flagship runs. I need to do another big sort to check what I'm missing (yeah, I'm definitely not one of those guys who keeps good records of his collection), though I think now I've got all the main base cards from his career. That's a quite a milestone for me, though probably something I should have accomplished long ago seeing as Tony's my all-time favorite player.
Thanks again, Eric!
Posted by defgav at 4:05 PM