The Gentle Art of Selling Customs (aka Finally Got My Cease and Desist!)

I've been photoshopping up digital "cards that never were" since the early days of this blog. Last year, I began taking it to the next level by printing out hardcopy customs. I eventually got pretty good at it and was so happy with the results that I wanted to spread them around a bit. These days, the majority of trade packages I send out have at least one custom in them to spice up the batch of cards and give my own personal touch. I know not everybody cares much about "fake cards" but most collectors at least get a mild kick out of a well-crafted custom, treating them as quirky oddballs.


I got to the point where I was so proud of the cards I was coming up with that I started trying to make a few bucks selling them on eBay and Twitter. It was slow at first, but eventually I got into a groove for a stretch where I was maybe selling a card or two per day at around $5 a card. After various costs/fees, it wasn't much, but I got to the point where I was pretty much supporting my hobby purchases with my PayPal balance rather than the associated bank account. So that was nice. 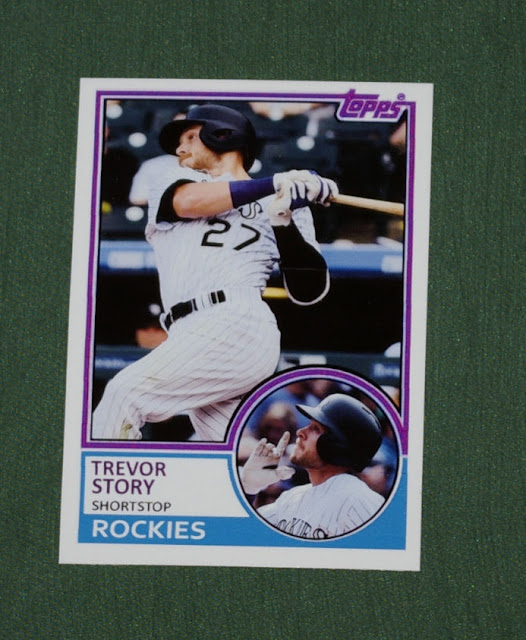 This Trevor Story card of mine was a good seller. Topps Now is a great idea. Topps won't get shut out with any out-of-nowhere rookie sensations thanks to this card-making system. But even with the several ToppsNow Trevor Story cards available, I saw quite a bit of interest in this faux 1983 card for the rookie who came out of nowhere to a blazing start this season.

But perhaps I flew too close to the sun, getting brazen offering it and other customs on Twitter. Two or three haters started tweeting shit like, "Does @toppscards know he is making fake cards with there (sic) logos[?]" The next morning (moments after I started drafting this rebuttal post, funny enough), I got a firm but polite email from Topps' Deputy General Counsel essentially telling me to stop selling fake Topps cards.

I gotta admit it gave me a big smile. It was an honor to have even gotten on Topps' radar. Just some collector fanboy printing a small handful of cards on his home printer, apparently good enough to threaten Papa Bear of the baseball card world. For a trip back in time, check out my January 2015 blog post "Concern over counterfeit and custom cards on the market" highlighting my feelings over the rise in ease of making customs, and more dangerously, counterfeits. I lamented the fact that Topps seemed to do nothing to stem the tide of fake cards flooding the market. So in that regard it almost feels like a win.

I've made no secret on this blog over the years that I'd love a job in the sportscard industry. I'd like to think the fake cards I've come up with over the years have been like a "portfolio" showing that I'm capable of coming up with good ideas for cards and adequately executing those ideas. And the fact that I've put out several customs that've seen strong interest has helped validate that for me.

To my credit, I definitely never attempted to counterfeit any cards nor tried to trick people into thinking my customs were actually put out by Topps or whomever. I always made it very clear that the card I was making available was a fan-crafted "card that never was" meant to fill a void real card companies hadn't filled. My customs were clearly marked as such on the back. There's no doubt that my customs were supplementary to real cards, never in direct competition.

But yeah, I may have gone a bit overboard and totally understand Topps draping a wet blanket over my little operation. I hope they continue their pushback against fake cards-- Counterfeits, specifically (customs aren't really that big of a threat), but yeah.

And for the record, any profit I made from selling customs went straight back into the hobby. I recently pre-ordered a couple hobby boxes of 2016 Topps Archives that I'm excited to get when that product releases in a few weeks. I also used that Trevor Story custom money to buy a real Trevor Story card: 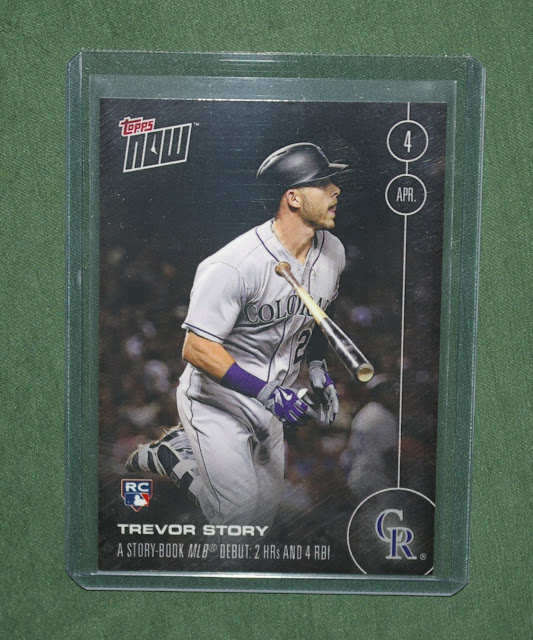 I can tell you that without the extra padding in my digital wallet, I would not have pulled the trigger on that card. Big picture, me selling a handful of homemade cards helped the hobby and Topps way more than hurt it.

But yeah, I've agreed to not sell any more Topps custom cards going forward. I quickly compiled with Topps' request the day they sent it and did my best to remove any posts/tweets where I had offered faux Topps cards for sale. They were pleased with my cooperation and even offered to maybe send me some product as a thank-you if I'd be so kind as to provide my address. Realizing this might just be a ploy to have my information on file with their legal department, still I couldn't resist the possibility of free cards, and happily responded with my full name and address. I'll let you know if anything shows up. (Update: They sent a box of 2016 Museum Collection! Nice!)

Let's wrap up this post. Will I stop making cards? I don't think I can; it's like a form of self-expression for me. But I'll definitely do my best to tread lightly in regards to stepping on toes from a legal standpoint, especially if I attempt to make a buck off them. I'm thinking more original designs and tributes to forgotten oddballs. I'd love to follow in the footsteps of someone like fellow custom card creator, the guy behind Gypsy Oak, who seems to squeak out a living cranking out original-ish cards. But he's an incredible artist whereas my sketchcards would barely get me a passing grade in a high school art class, much less make me any money. So my dream of supporting myself with baseball cards is not likely to be realized anytime soon. Still though, making cards is a lot of fun. This is a great hobby and I'm happy to be an active part of it.

So there you go.
Thanks for reading!
Posted by defgav at 4:02 PM