If you've gone looking for modern minor league cards on eBay, you know there's really only one game in town: gosportscards. That guy has the hook-up for minor league issues from the past few years. I snagged a few singles from him the other day to take advantage of combined shipping. Here's what I got.. 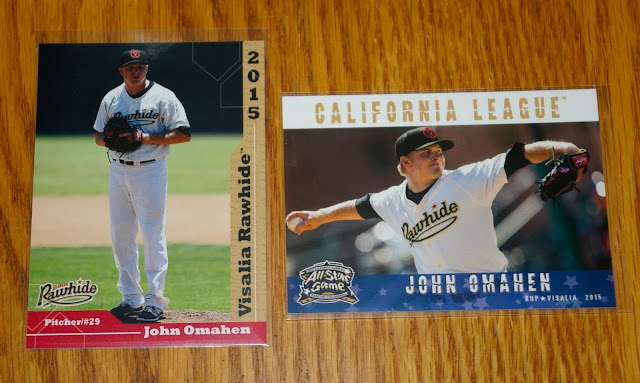 Zippy Zappy gave me a heads-up the other day that John (formerly known as "Johnny") Omahen has a retail-only autograph in 2016 Bowman, releasing 4/27. I'm very excited about this and will likely try to rainbow it with all the parallels I can get my hands on. But for now, I've grown my Omahen PC with this pair of 2015 cards. I'm hoping he can become just the second guy from my high school to ever pitch in the majors (after Tom Fordham in the late 90s). His is a nice story, as after being released by the Marlins and spending 2013 on an independent team, he latched on with the Diamondbacks organization and had a fine 2015 season, going 13-3 with a 3.07 ERA. Looks like he's off to a rocky start in AA so far this year, but it's still early. 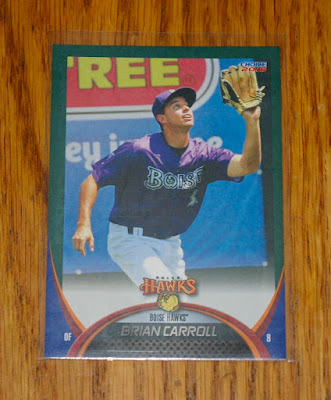 Finally got my first real Brian Carroll card! Maybe you remember last year I made a few customs and had an adventure at the ballpark attempting to get them signed in person. Another Guy From Granite, he battled injuries to finish 2015 strong, ending up with a .306 average and 14 steals in his first professional season. Not sure where he'll play this year, but I'll be keeping an eye out. 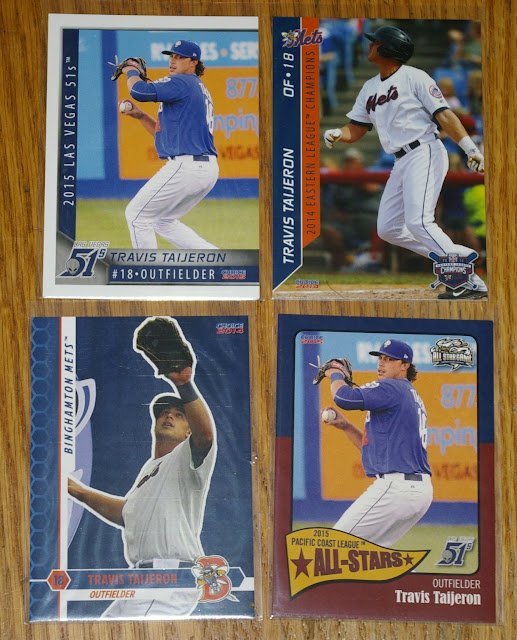 Travis Taijeron is back in AAA this season, but you gotta figure he's waiting in the wings if/when the Mets need any outfield help. I was a little surprised to see him shut out of the 2016 Bowman checklist after impressing last year in AAA and this spring training. Hmm. Well, hopefully he gets another mainstream card soon, but for now, this lot of 4 minor league cards will tide me over. 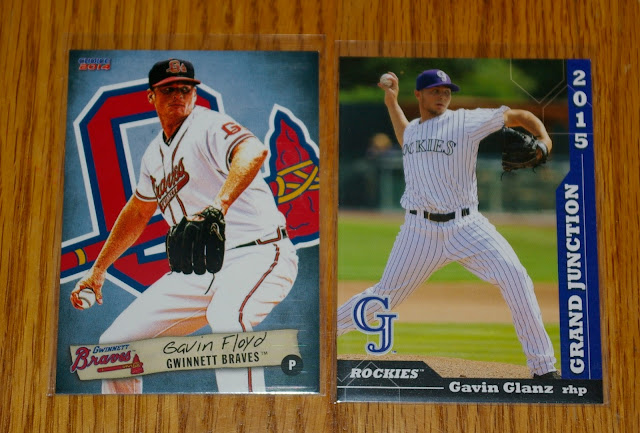 Ok, now we've finished with the players who went to the same high school as me, and moved on to the players named Gavin portion of the order.

Seller gosportscards always puts the keyword "rookie" in his eBay listing titles. Sometimes this makes him look kinda stupid, as this Gavin Floyd card definitely ain't no rookie. He had 5 rehab starts for the Gwinnett Braves in 2014. Since he's only got one card from his stint in Atlanta (2014 Topps Update), I thought it'd be cool to pick up this minor league Braves card. Mr. Floyd has been having a good start to 2016 out of the pen, looking like a shrewd pickup by Toronto. Hopefully he gets a card as a Blue Jay soon.

Gavin Glanz is a guy I successfully got a TTM back from last year. He had some good starts in 2015, but ultimately finished the season at 2-5 with a 4.84 ERA in the low minors. Not sure where he's at this year, but I'll be rooting for him.

Thanks for reading and have a great weekend, everybody!
Posted by defgav at 3:30 PM