I like Topps Archives a lot. In 2012, I had been out of the hobby for nearly two decades. I took a curious look on eBay to see what has happening in the world of baseball cards. I was immediately drawn to Archives with the familiar old designs featuring stars of yesteryear and today. I ended up buying 2 or 3 blasters over the next few months. Didn't pull anything too exciting besides a Pettitte relic and a Clemente reprint RC. I discovered the seminal 1988 Topps blog, and from there Night Owl Cards.

By 2013, I was fully back into the hobby, picking up where I left off building my collection in the early 90s and starting up his here blog. Again, I bought 2 or 3 Archives blasters that year, with the only hit I recall pulling being a boring Hanley Ramirez relic.

When 2014 rolled around, I was entrenched in the hobby and had made a name for myself in our little corner of the internet. I got serious about Archives that year and ponied up for a hobby box. My 2 promised autos were David Eckstein and Terry Pendleton.. fine players, but both definitely on the common/cheap side of the product's autograph checklist.

In 2015, I doubled down and pre-ordered two hobby boxes of Archives. I figured that would ensure I'd finally score a sweet hit from the product. Right? Nope. I mean, I did alright, pulling a Brett Gardner printing plate and a /199 auto of Jason Kendall, plus base autos of Brady Anderson, Dontrelle Willis, and somebody else who isn't coming to mind. (Had to look it up in my blog's archives: Dalton Pompey).

So it had become an annual money dump for me, but was still fun enough for me to keep it going. I would enviously watch guys like the Snorting Bull blog have excellent boxes every year and think when am I going to get a sweet box like that? This year, I again went the dual-box route... hoping maybe this time I'd finally reach that pot o' gold.

I think I'll be using one of the boxes for an 80s toy "narrative" post like I did a couple years ago, so stay tuned for that one (still haven't finished busting that box). But the other box I tore through Friday evening. It was very, very good to me. 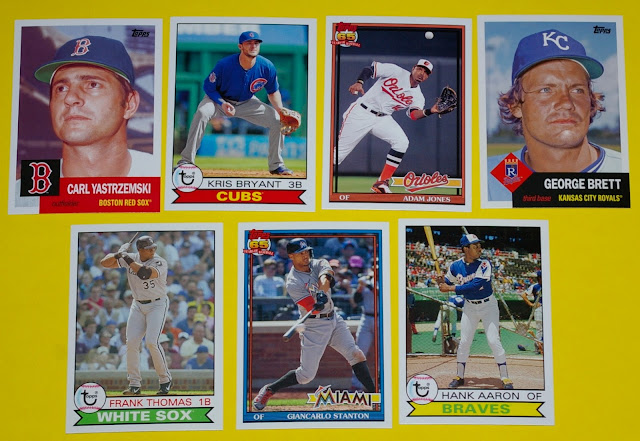 Here's a representative selection of some highlights that caught my eye in the base card department.

I never bother trying to complete the set, just go after guys I collect, any key rookies, and hope for a decent hit or two. I was happy to come up with a nice fat stack of keepers for my collection. The old-timers are pretty much all pictured with the respective teams you'd expect, with Boggs as a Yankee being the only minor "surprise" I came across. Personally I'd love to see a few more interesting choices such as Lou Brock as a Cub and the like, but oh well. I really like how the 1991 and 1979 designs look. Gotta say 1953 is easily my least favorite of the three, featuring boring, often low quality headshots with none of the charm of the original cards' painted portraits.

When I rip a pack and see the back of a 1991 Topps card, the first thing I think is, "Hey, where's the gum?" Haha. I was very pleased that Topps brought back complete career stats on the back this year (not applicable to 1953) after tragically truncating them in the previous couple years of Archives. I love the tiny text on cards of guys like Mays and Ryan who played forever! 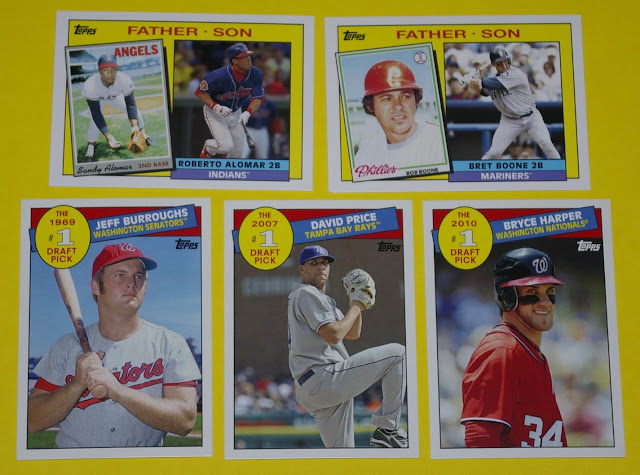 Ok, now we're getting into the inserts. I really like these two 1985 insert sets, with Harper clearly being my best pull here. 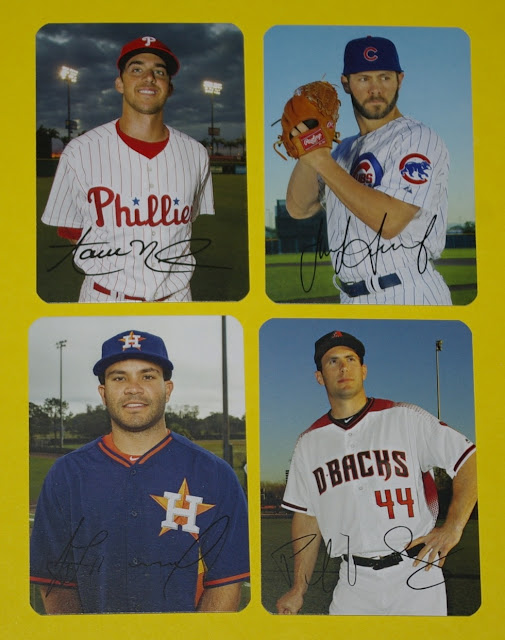 These inserts almost feel "wrong" being in a modern set, what with the rounded corners. While a tribute to the oversized 1969 Topps Super set, these things are probably closer to overproduction-era Mother's cards in reality. They are pretty cool, though, and I was very happy to pull the Goldy. 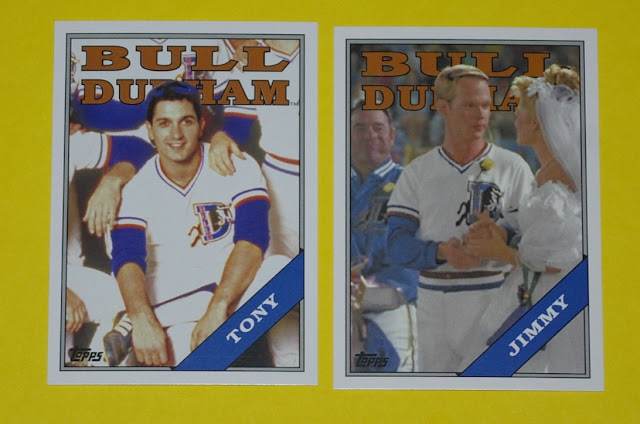 I gotta admit the Bull Durham cards don't do anything for me. I watched the movie once or twice long ago. It was fine and all but I wouldn't list it among my favorite baseball flicks or anything. I'll need to Netflix it one of these days to reacquaint myself with it and remember who "Tony" and "Jimmy" are. 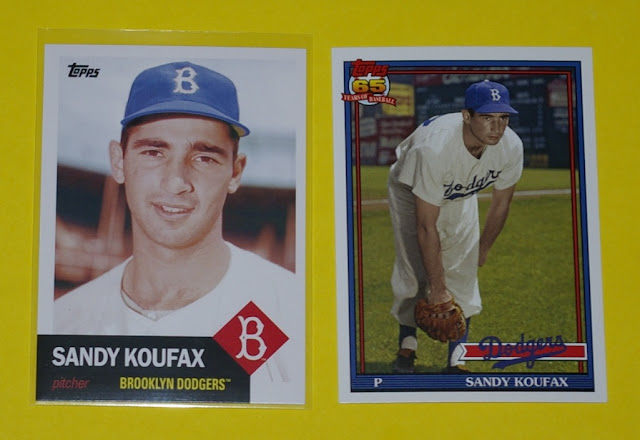 A pair of Koufax cards. The 1953 one is an SP, I believe the only one I got in this box. Archives SPs are dumb this year, as they usually are. At least there are only 10 of them. Same ol' designs as the base (I miss when the SPs were in different designs), and why repeat players? I think SPs should be reserved for lesser-known oldies who aren't in the base set (if there's gotta be SPs at all). If you really gotta repeat players, at least switch up which team they're pictured with.

Some parallels. Red (/50) for the Cardinals and blue (/199) for the Cubs.. nice and color coded. Damn Oakland ruining that coordination! Too bad there aren't green parallels. I'm just glad they got rid of the "silver" (gray) and "gold" (rust) parallels from last year.. those were ugly. But I miss the shiny parallels from earlier years of Archives. 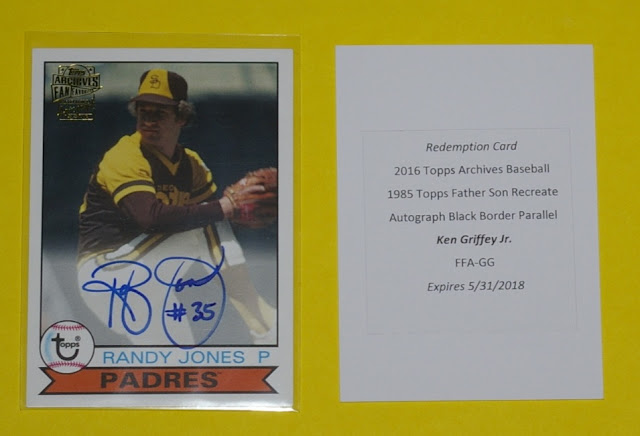 And now for the grand finale of the box.. the autos! As a Padres fan, I was happy to pull a Randy Jones autograph. Not a "sick mojo" hit, but he's a PC guy for me, so it's a nice hit for my collection. But that was just the tip of the iceberg for my luck with this box. I already made a quick post about the Griffey redemption the other day after I pulled it.

And yeah, according to eBay, the black parallels all seem to be 1/1. There don't seem to be many Griffey autos available from 2016 Archives, with only like 4 redemptions popping up on eBay by the time I'm writing this post. And none of those are the Father/Son card. The #1 Draft Pick design seems to be more common. The prices are pretty crazy. I'm sure I could get some ridiculous $$$$ if I sold mine. It's tempting to cash in and put it on eBay right now, but I think I gotta hang onto it. It's just too good of a story.. Archives is the product that brought me back into the hobby. Then I struggled with it for a few years with lackluster boxes (and honestly I generally have bad luck with all unopened product I rip). Until BAM! Finally got my sick mega mojo hit of a lifetime. There's no way I could ever top that. Hell, I even pulled it on the same day the great Muhammad Ali died, to throw a little extra weight into the situation. While it might be nice to sell it and use the funds to land an unattainable dream card for me like a high-grade Clemente rookie or something, I still think I gotta hang onto the Griffey. Like most collectors my age, I'm a big Griffey fan and he's always been a guy I collected.

Here are some images via eBay so you can use your imagination to extrapolate what the card I pulled a redemption for will look like, though with a black border.
The base version of the Griffey Father/Son card. (Why did they go with the 1980 Topps card for Sr? That's like his worst looking card!)

An example of what the Father/Son autos look like. (It'd be cool if they also got the dads to sign, making them dual autos, but hey, minor complaint.) Hmm.. apparently the "base auto" versions of these are /10. So yeah, definitely scare, and even if I didn't pull the black parallel, it'd still easily be my best hit ever.

So now I have to go through the redemption process. Fingers crossed for a prompt redemption with no snags! Redemption horror stories prod at my brain and make me think I should just sell the redemption and let someone else worry about it.. though that thinking already came back to haunt me once when I let a nice Michael Conforto auto slip away. So might as well live a little and risk it.

It's a little stressful, what with it being such a high-dollar card. This is one delivery where I don't mind a signature being required! When it arrives, I'll take a bunch of pictures of it and then get it into a family safe deposit box or something. I might even keep it at work; Sounds funny to say but I work in a very secure room with 24/7 cameras and not even the cleaning crew has access. At least there I could admire it every workday and bask in the glory that is the pull of my lifetime. But yeah, first things first; need to get it in-hand.

Anyways.. I'll keep ya'll updated. Thanks for reading!
Posted by defgav at 8:47 AM