If you've been following the 2016 MLB draft, you're likely aware that Gavin Lux was taken by the Dodgers as the 20th overall pick. Pretty cool! As the cardsphere's premiere Gavin Collector, it's obviously of interest to me. As a Padres fan, I'm conditioned to not like Los Angeles, but honestly I don't really hate the Dodgers that much. I'm totally fine with my Gavin brethren representing Dodger Blue. Sure, in a perfect world, he'd go to the Padres. Definitely prefer LA over him languishing in some third-world baseball organization like the Marlins or Dbacks. Gavin was committed to Arizona State and I figured he'd grind out a couple years there before going pro, but looks like he had a really strong HS senior season, and if you get drafted in the first couple rounds, that's a nice payday, so yeah, go for it. Apparently the other kid who was the top shortstop prospect allegedly failed a pre-draft drug test, leaving Gavin Lux as the #1 SS available. The Dodgers liked what they saw and grabbed him up early (he had been ranked the #40 talent available).

Anyways, best of luck to Gavin with his professional career. Hope to see him manning short in Chavez Ravine soon and for a long time into the future!

This has got to be the first time in my collecting history that I've already had a card (much less a budding PC) of a guy as he was taken as a 1st round draft pick. Mr. Lux isn't the first 1st round Gavin, though, as he joins Gavin Floyd (4th overall to the Phillies in 2001) and Gavin Cecchini (12th overall to the Mets in 2012) as highly drafted Gavins.

Let's take a look at my Gavin Lux collection as it stood on the day he was drafted. 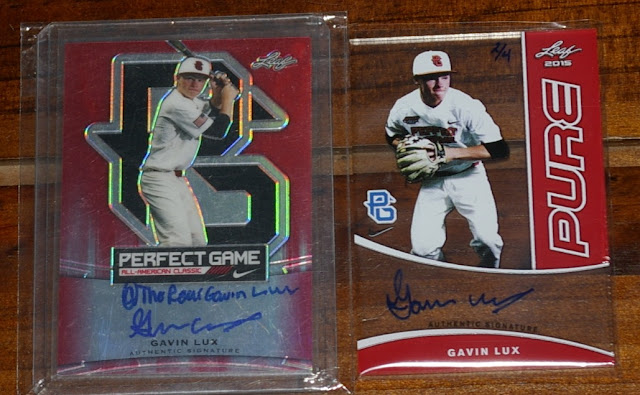 Here's some sick mojo, #'d /5 and /4, respectively. The fact that he went to a big market team most likely helped boost the value of his cards. Which is nice for the cards I already had, but might suck as I try to add to my PC going forward. For example, when he eventually gets a Bowman Chrome card, will I even want to try to rainbow it? Probably not, as I'd have a lot of LA fans to compete with. Oh well, at least I grabbed these couple sweet cards cheaply while I could! 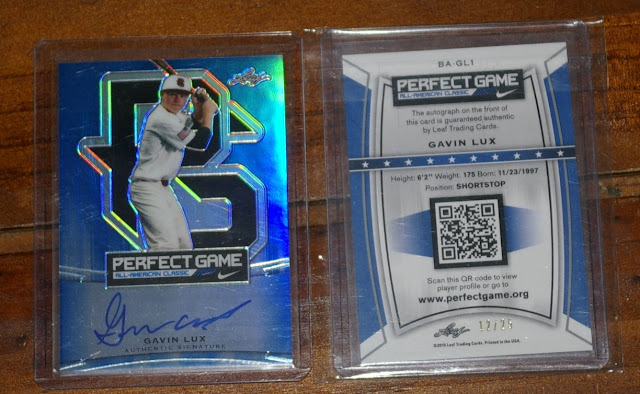 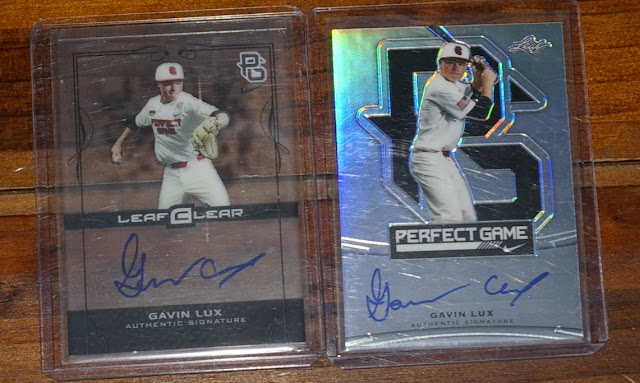 And a couple non-numbered autos round out my auto-heavy little Gavin Lux PC.

So yeah, a decent PC to start out with. You traders out there, while you may be compelled to send all your future Gavin Lux cards to Dodgers collectors (not naming names --NIGHT OWL), don't forget about your pal Gavin who was collecting him back when he was in high school!
Again, best of luck, Gavin!

Speaking of good stuff happening to guys named Gavin, things have been great with me lately. I'm digging my new job and really like the people in my team. Also my wife's graduation ceremony was today.. officially done with school now, getting her MBA with honors.. very proud of her! And a couple days ago she finally got that promotion she interviewed for like a month ago (at the same company I work for). So she's stoked on that. Oh, and for a graduation present from her folks, she got a new smartphone. You know what that means! I get handed down her old phone, and while I won't have service on it, at least I'll again have nice, pocket-sized camera. I'm excited for that!

That's it for today. Keep on rocking, everybody.
Posted by defgav at 3:33 PM