COMC eases the pain of missing the card show

I couldn't resist placing another COMC order during their spring cleaning sale a little while back. It was my 3rd order on the site within a couple months. That's definitely more frequent than my norm. But hey, I missed June's local card show because I was in Hawaii (boo-friggin-hoo, right?), so this package of a couple dozen cards helps me get my fix of picking up some various new cards. 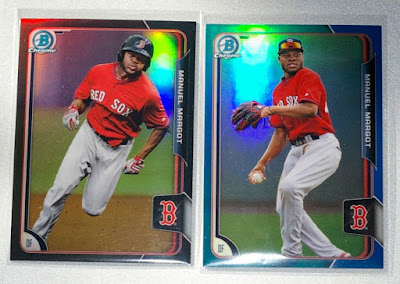 I always like picking up shiny, colorful Bowman parallels here and there. Manuel Margot is having a solid year for the Padres' AAA team. The card on the left is 2015 Bowman Draft Chrome Asia Exclusive Black Refractor, while the right is 2015 Bowman Chrome Prospects Blue Refractor (/150).

Keeping with the shiny, I made a little progress on my foolish 2004 Topps Chrome black refractor parallel setbuild. 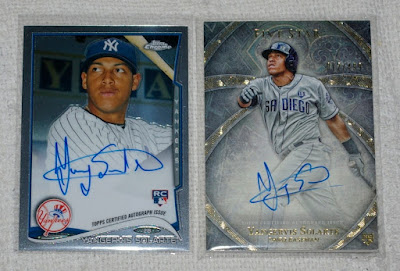 Yangervis Solarte is a current Padre standout of whom I didn't previously have an auto (though Topps pretty much saturated the market, putting out a ton of his autos in 2014). These two ran me just $3.56 combined. 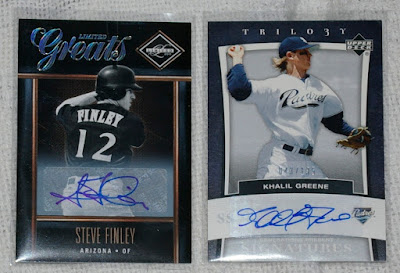 A couple more autos of notable Padres. Well, the Steve Finely card says Arizona, but whatever. Maybe I'll make an overlay for it someday. I wanted an auto of his to top off that passive PC, and this fit the bill for only $1.89 (#'d /499 to boot). As for the Khalil Greene, well I already have a few autos of his, but for just $1.74, I couldn't resist this one #'d /135. 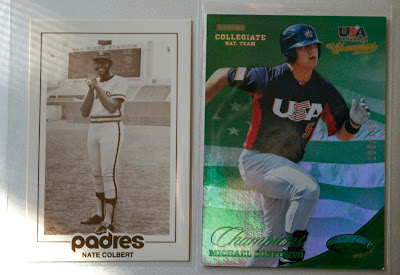 I don't add cards to my Nate Colbert collection very often anymore, but this blank-backed oddball is kinda neat (1977 San Diego Padres Schedule Cards #NACO.3). On the right is a Michael Conforto (2013 Panini USA Baseball Champions Certified National Team Mirror Green #129) #'d /199 that was discounted thanks to a dinged lower right corner. I don't mind that much, and was happy to pick up an early card of his. 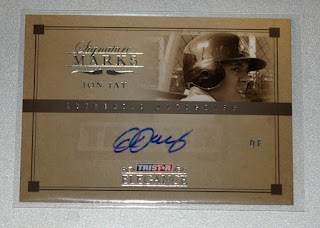 I grabbed another cheap Jon Jay auto. Poor guy recently broke his forearm and will be on the shelf for a while. I had an extra Tony Gwynn Socks overlay lying around, so I figured why not pair it up. I'll eventually find it a home.

NOT PICTURED: I also picked up a dozen ~50¢ needs for my 1965 Topps setbuild. Forgot to snap a photo before I filed them away; Oops. I'm at 61% complete now.

That's it for this time. Not a huge order, but I wanted to take advantage of that free shipping window.
Thanks for reading!
Posted by defgav at 3:42 PM