Ok, maybe there's not really that much tension here, but I'm grasping at straws for a theme for this trade roundup featuring a trio of unexpected mailings that arrived while I was on vacation.

First up is GCA. We had traded a month or two ago, and while it was a fine trade, I think we both felt it could have gone smoother. GCA, the stand-up dude he is, took it upon himself to hook me up with a few more cards. 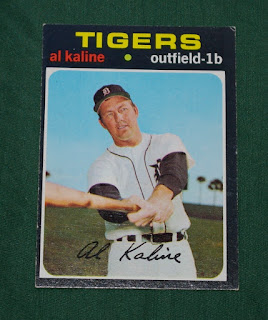 Nice Al Kaline! With this card, I've completed up through the first and second series of 1971 Topps, and am two Word Series highlights away from finishing the third series. I'm in good shape with the fourth series as well. But it's the fifth and sixth which are the stinkers. I'll get there eventually, thanks in part to the generosity of traders like Greg. 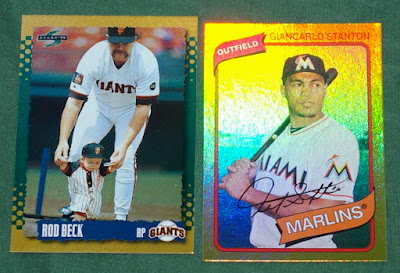 A couple gold foil parallels of top-tier dudes I collect! 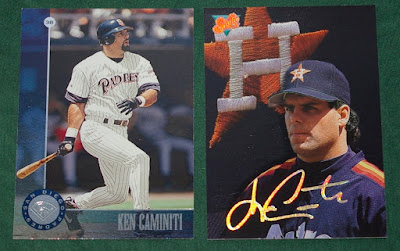 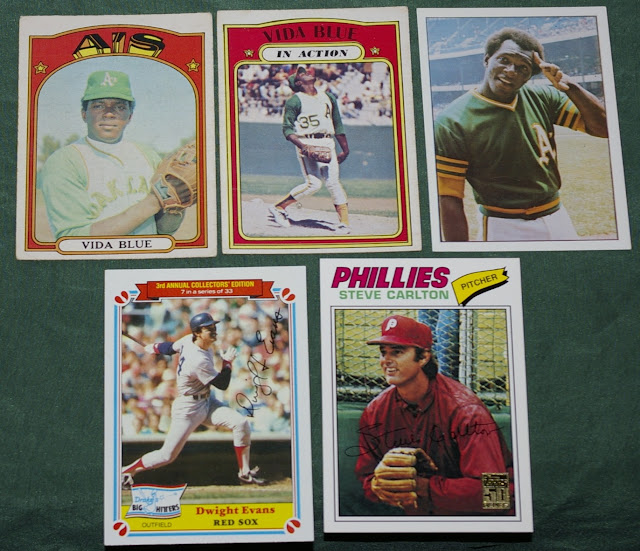 Some stars of yesteryear, highlighted by 3 Vide Blue oddballs. Yep, those 1972 cards... 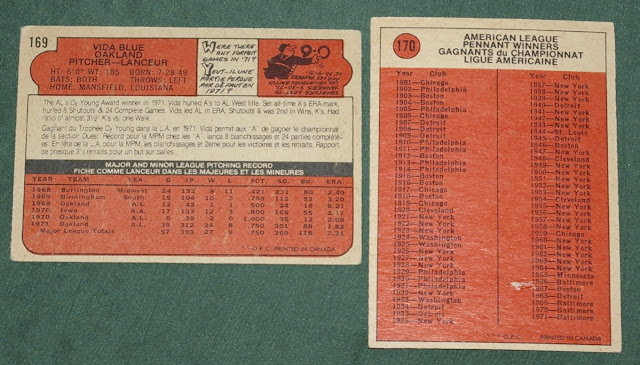 Big thanks, GCA! Great stuff! I'll try my best to round up some more cards for you soon.

Next up is Night Owl surprising me with a nice lot of Dodgers and Padres. 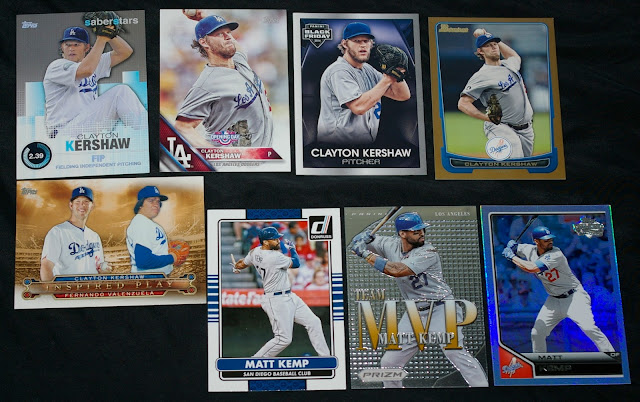 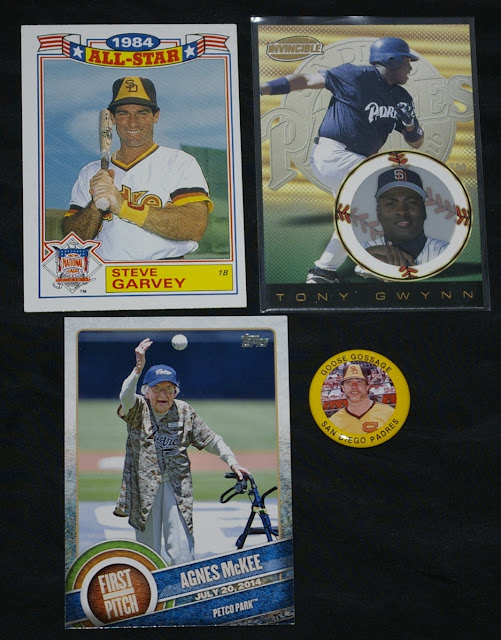 Some Padres old-timers. I'm pretty sure that's the 2nd same Goose Gossage pin Greg has sent me.. but hey, I'm happy to have an extra now because that means I can put this one on my backpack rather than treat it as a collectable! 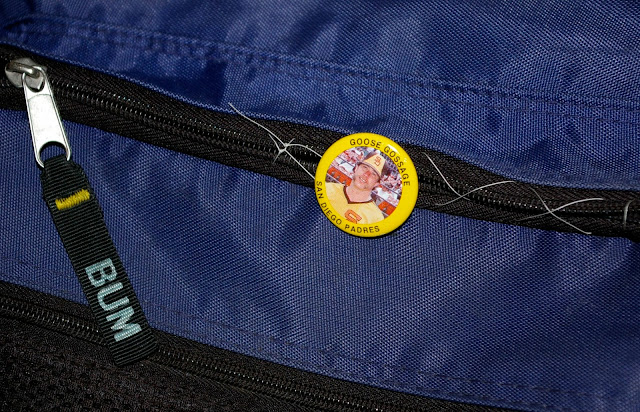 (Yeah, it's about time for me to retire this backpack. The zippers just aren't cutting it anymore.) 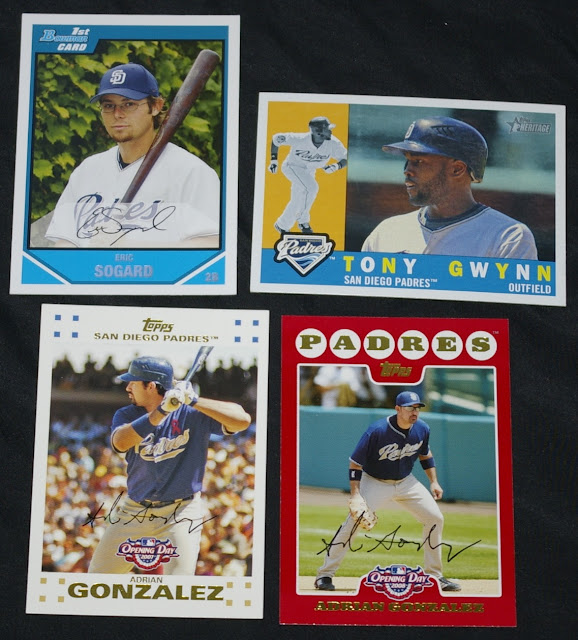 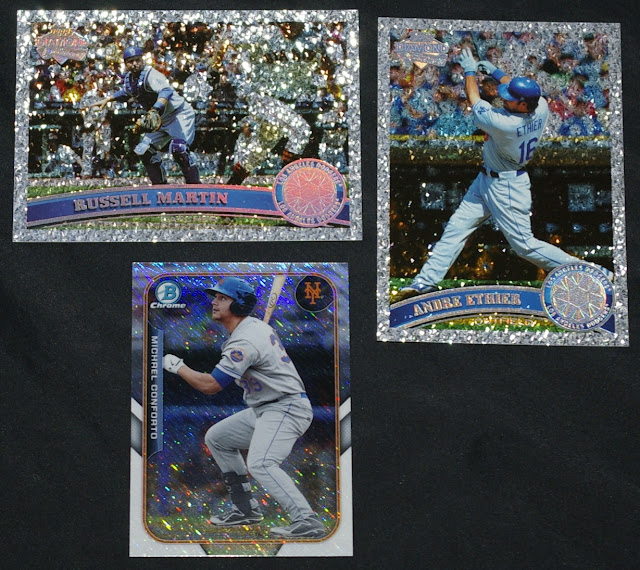 And a couple sparkly 2011 Topps parallels. A Bowman mini Met breaks up the LA/SD card parade. Very happy to receive this shimmering Michael Conforto. Bummed he got sent down recently. He was doing great to start the year, but had been in a big slump for the past month. Hopefully he gets his issues worked out and is back in NY soon.

Thanks, Greg! I'll be sending you out a return soon.

Finally for today, here's a 2-card PWE from Jedi Jeff. See, fitting into the "tension" theme of the post, he and Night Owl kinda went at it recently. Hey, disagreements happen, and sometimes they get a little ugly, even in relatively chill crannies of the internet such as the cardsphere. 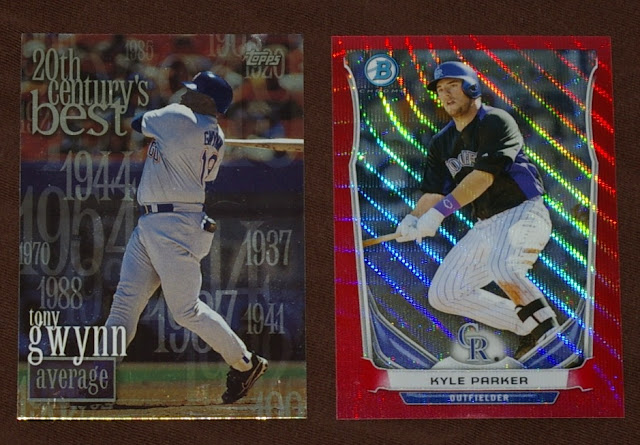 Here we've got a Gwynn I'm pretty sure I needed from 2000 Topps, and a red wave refractor of a random Rockies prospect from 2014 Bowman, Kyle Parker. Beautiful card, but what makes it extra awesome?... 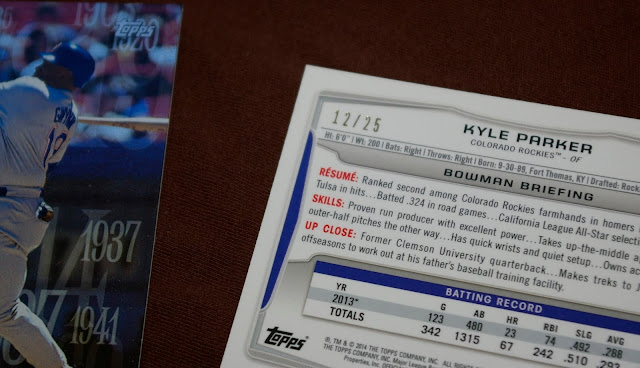 Very cool.. thanks, Jeff! I was able to scrape up a return PWE for you already, so expect that shortly.


Thanks again to Jeff and the two Gregs for the great cards!
Posted by defgav at 1:40 PM