Just a quick post today featuring a couple autos I picked up recently from the Adventure Time card product that Cryptozoic put out a few years ago. 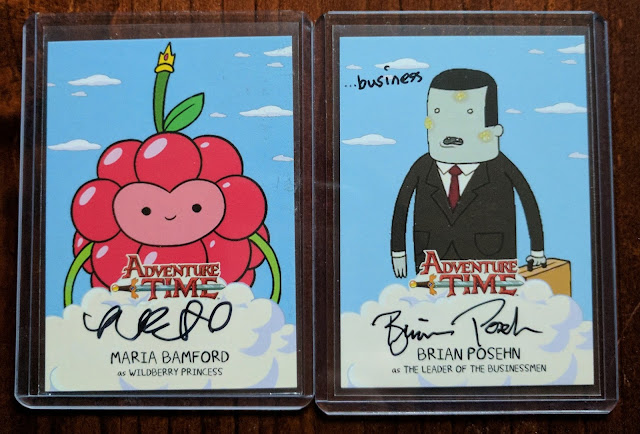 While I like the show, really I just wanted these comedians' autographs, so these cards were the best vehicles for that. Each ran me about $11 shipped.

Maria Bamford is really funny and weird. If you have Netflix, I'd recommend her show Lady Dynamite as well as the few stand-up specials of hers on there. She does a lot of ancillary voices on Adventure Time, with Wildberry Princess being the one they chose for the card. Her signature kinda looks like it says "REDO" but it works for me.

Brian Posehn is a really funny guy who guested on Adventure Time for an episode. Dig the "...business" inscription. My wife and I caught a live performance from him last October, which was filmed for a special called 25x2 which is now available to stream on Amazon if you subscribe to a service called Seeso. I'd kinda like to check out how it turned out, but probably not enough to pay for it, especially since I already saw it live. To copy and past what I said about Posehn last year, he's that big ogre monotone comedian. He's been in some of my favorite shows over the years, such as The Sarah Silverman Program, Mr. Show, and Mission Hill.

We just watched through Mission Hill again last month. Really underappreciated animated comedy. It was like the 3rd or 4th time through for me, but first for my wife. I think she liked it.

She's a big standup comedy fan, and as such these are a couple cards that I can use to almost impress her with a little (She doesn't really care about cards or sports, so it's opportunities like this and when I got that Carrie Brownstein First Pitch insert [she loves the band Sleater-Kinney] when I can try to share the hobby with her, even the tiniest bit.) She's got a birthday coming up, and for her present asked for tickets to a big comedy festival happening here this spring. $165 for 2 tickets! Shit better be funny! haha. 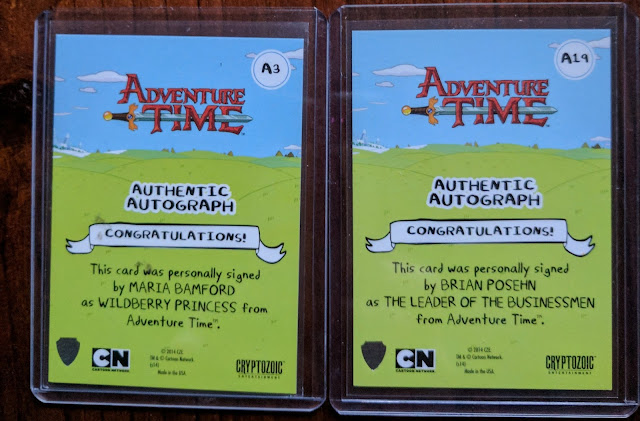 But yeah, back to the cards, here are the backs. I already had the Erik Estrada from this set, which I posted about last December. While there are several more autos from it that I wouldn't mind picking up someday, the one I'm specifically keeping an eye out for at a good price on is Neil Patrick Harris. Gotta love NPH.

That's it for today. See you next time.