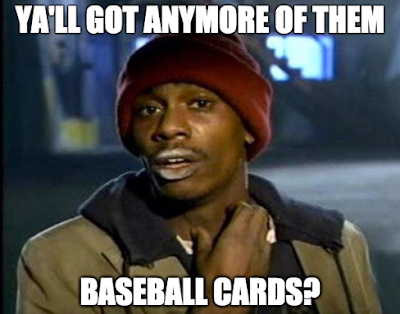 February's card show couldn't have come at a better time for me. Maybe I've become spoiled since diving back into collecting and becoming an active cardblogger, but I've gotten used to 2 or 3 card packages/envelopes showing up in a given week, whether from trades or purchases. But get this: I didn't get any cards in the mail this past week! Brutal, right?!

Oh wait, I guess I got that Fracisco Lindo Tek auto in on Wednesday.. So, ok, I did get one measly card, but that's it. So needless to say I was jonesing pretty bad. Card show to the rescue!

It was actually a light haul for me today, sticking to the familiar 7/$5 bins of my "regular dealer" Bill. Much of my time at the mall where the show is held was spent in the Target trying to whip up something for my wife's birthday tomorrow. (While I pride myself at being a solid card trader, I admittedly suck at giving presents to my loved ones. If only everyone collected cards, gift-giving would be so much easier! lol) [I ended up getting a piñata for her with a bunch of candy and stuff inside it. It might be childish, but I think she's really gonna have a fun time whacking that piñata. Also some Silly String for us to battle with.] 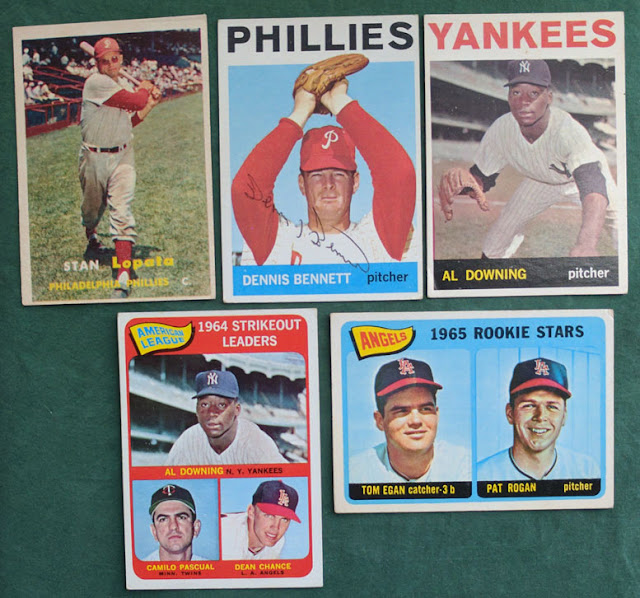 I was able to dig up some vintage set needs. The Dennis Bennett card looks to be signed.. I suppose that's cool for my set, but perhaps I should "upgrade" to an unsigned copy someday. I was too lazy to check my wantlists, but turns out I did need the 57 and both 64s, happily. While I had the 65s already, at least the Angels Rookies was an upgrade. 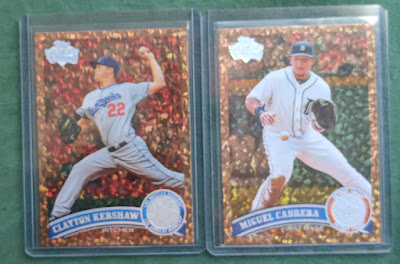 A couple big names for my 2011 Topps parallel frankenset. I already had a "diamond" Kershaw, but now that can move to the PC while this liquorfractor takes its place in the frankenset. 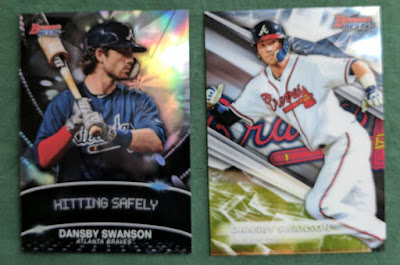 I'm not going all in on Dansby quite yet, but might as well pick up a couple of his cards. 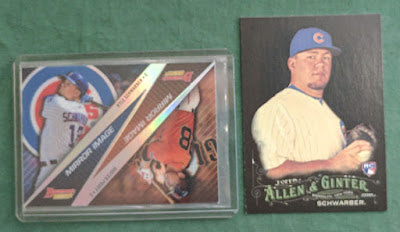 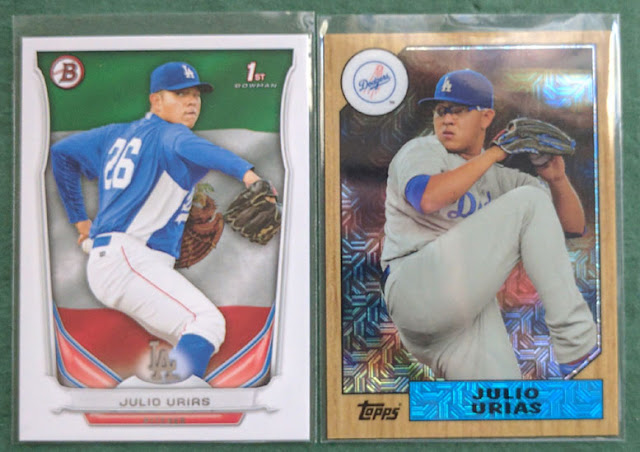 A couple solid Julio Urias cards including a hometown flag parallel and one of those new 1987 inserts many collectors are crazy about, this one of the Transformers refractor parallel, or whatever it's officially called. 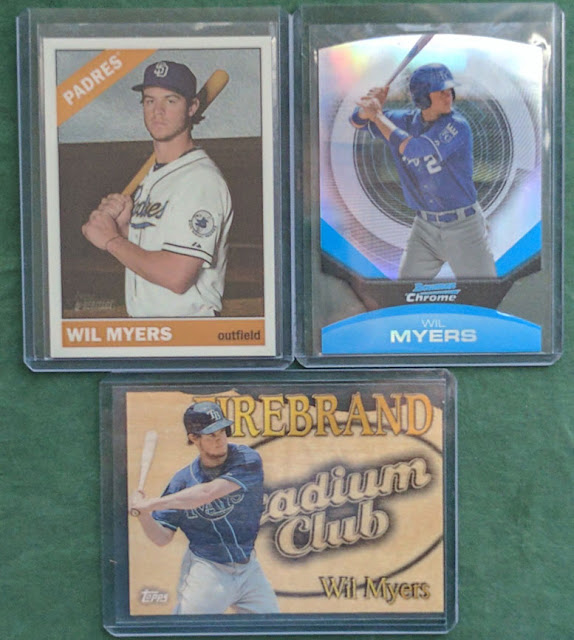 Always seem to find some decent additions to the Wil Myers PC. Chrome Heritage, die-cut refractor (there were also non-refractor versions that I passed on. From reading card blogs, it seems some collectors aren't good at identifying refractors. This makes me feel like I have a superpower because it's clear to me when a card is a refractor or not.), and a Firebrand wood-like Stadium Club insert. 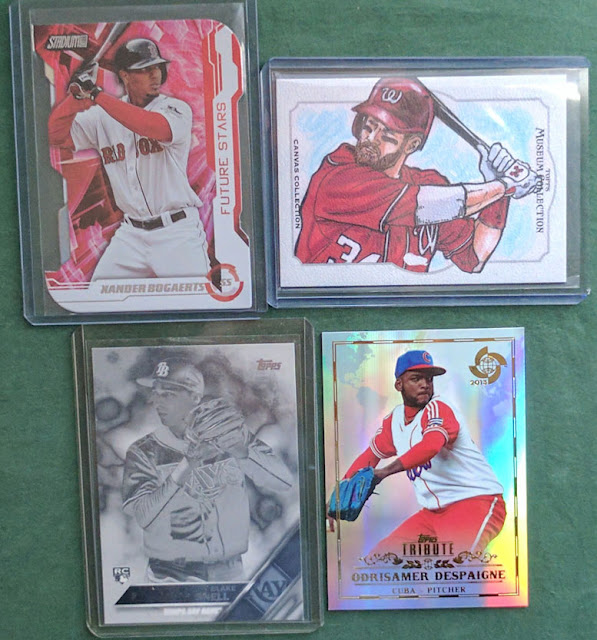 Here are more cards I bought. Bogaerts die-cut is kinda cool. I'm not big on fake sketchcards, but those Museum Collection cards aren't super easy to come by.. there's only one such Bryce on COMC right now, for $4.25, so it was a good buy for me, sub-buck. The Snell negative parallel is dumb, but hey why not. And Despaigne endeared himself to me when he was a Padre and I still kinda like him, so this shiny WBC card seemed like a solid pickup. 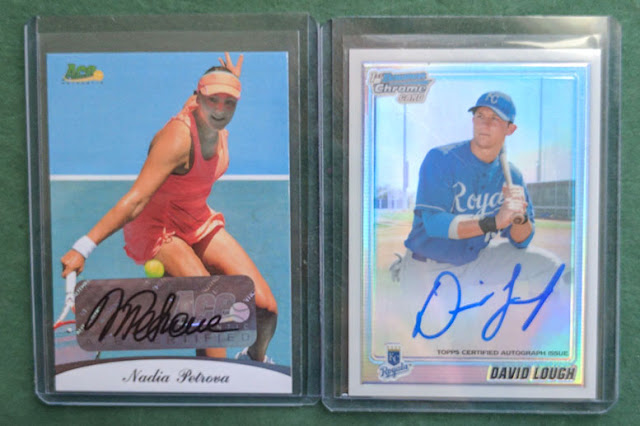 Snagged a couple certified autos. I'm not much for tennis, but at least Nadia Petrova is a name that rings a bell. She had a pretty successful career, and just officially retired last month. And a "1st Bowman Chrome Card" refractor auto is always hard to pass up for under a buck. David Lough isn't a great player or anything, but seems to have carved out a decent career as a 4th outfielder, recently signing with Detroit. 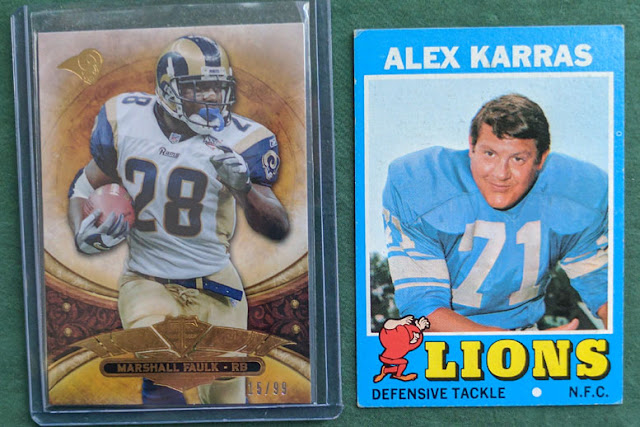 A couple football cards including a Marshall Faulk #'d 15/99 and a vintage Alex Karras (the dad on Webster!). 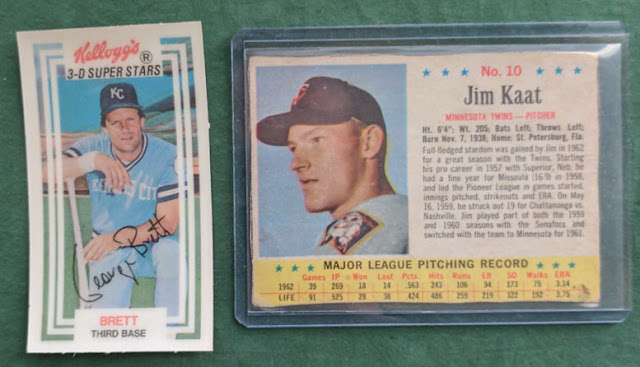 A couple old oddballs that originally came with food. Jim Kaat is a bit of a sleeper PC for me. Nice to add a card here and there. This 1963 Post card was a nice pickup, and a good deal seeing as the cheapest on COMC is $8 and I got it among my 7/$5 haul. 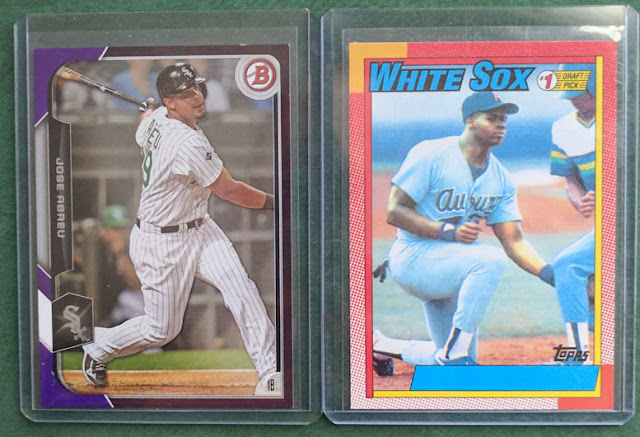 A pair of pale hose, including a #'d /250 Abreu and a NNOF Card Yo Mama Thru Out (which I already have, but figure I could use it as trade bait or sell it for little profit). 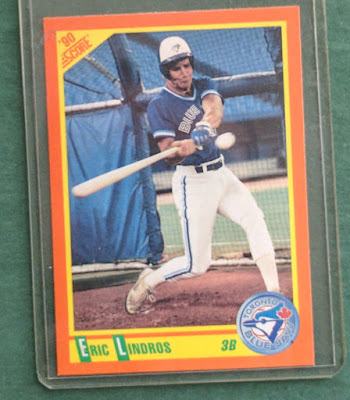 Here's a silly card I've always kinda wanted and just finally got around to it: the 1990 Score Update Eric Lindros baseball card. 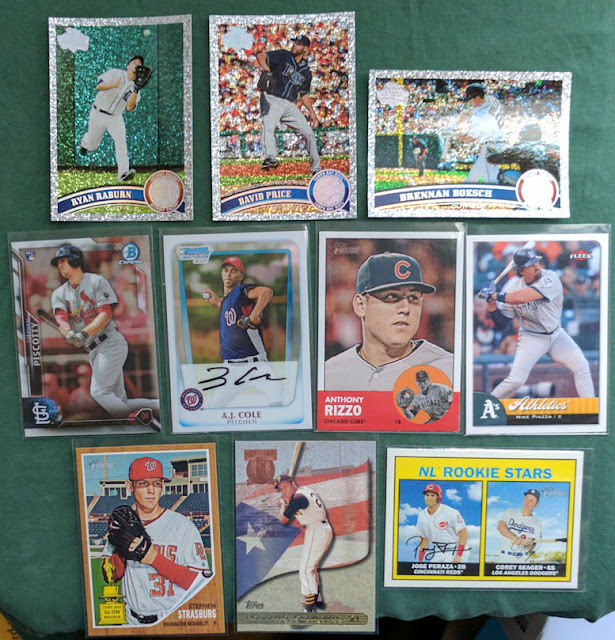 And finally, here's a couple bucks worth of cards from the cheaper bins. Highlights include three more needs for my 2011 frankenset, Piazza in a Padres uniform, and a Corey Seager RC.

So that was a decent haul for like $33, including a dozen or so more cards for trader buddies, not pictured.

UPDATE: Last month's card show recap mentioned some drama with a guy getting caught trying to pull off a heist of a bunch of cards he didn't pay for. Turns out he showed up to this show, I guess trying to act like nothing happened last month. But no, seems he got chewed out pretty good and told by the organizer that he was banned for at least 6 months. And the whole "only 6 months" thing was mostly to placate him because "gotta be careful these days. You never know how many guns he has in his car." So like a lifetime ban might cause him to go nuts and come back guns a'blazin'?

Thanks for reading and hope your weekend is going well!
Posted by defgav at 3:50 PM