Put another juke in the Dimebox

So, last post I was whining about a cardboard deficiency after a slow week, but then Saturday's card show and a few packages waiting for me when I came home solved that problem. One of the packages was a surprise from Nick at Dime Boxes -- The Low-End Baseball Card Collector's Journey that I'm gonna show off today.

Also this past weekend was my wife's birthday. She's less of a sentimental fool than I, and the other day she was cleaning out her home office and threw out her old concert ticket stubs. Upon her relaying this info to me, I was aghast and convinced her to at least let me scan them for posterity before parting with them forever.

And so, here they are, matched up with cards from Nick, as is a fun way to come up with a post. 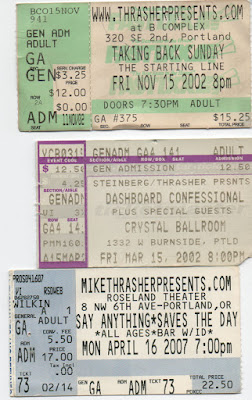 I must brag confess that my wife is 10 years younger than me. While our musical tastes intersect a fair amount, there are some bands/genres we don't agree on, as I assume is true with most couples. I think I was too old to really get on board with the emo music scene of the '00s, and so the bands on this trio of stubs don't do much for me, though there's a song or two here and there I can appreciate. I don't think my wife even really listens to these bands anymore, though she still has a soft spot for Say Anything (not to be confused with the film of the same name).

The only song in my iTunes by any of these above bands is "Belt" by San Anything. A guy named Brandon Belt plays on the Giants, so here's a photo of cards from Nick including some Giants I collect... 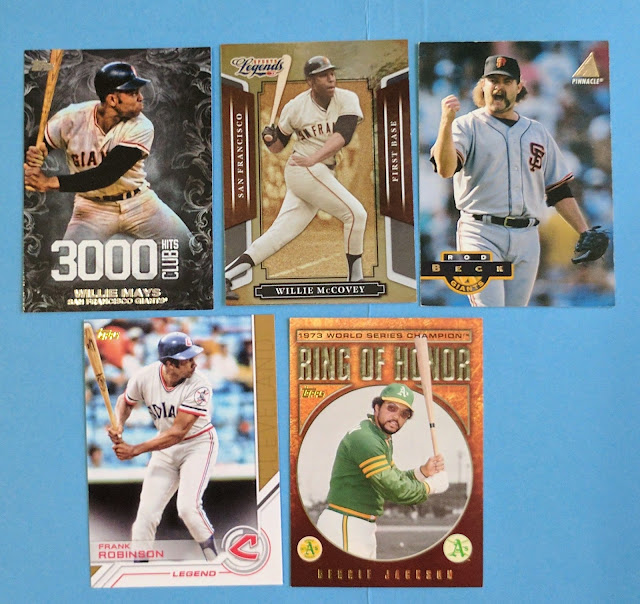 Also my first look at those plain 2017 Topps inserts with the Frank Robinson, plus an older Reggie Jackson insert I hadn't seen before. 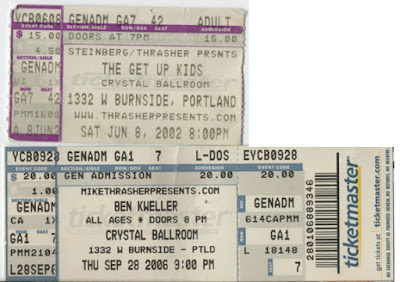 Ok, I've heard these guys a bit more. I've got one song by The Get Up Kids in my iTunes and it's a cover of the Cure's "Close to Me". Know who grew up close to me in El Cajon? The Giles Brothers.. so now here's a group of cards including Marcus and Brian. 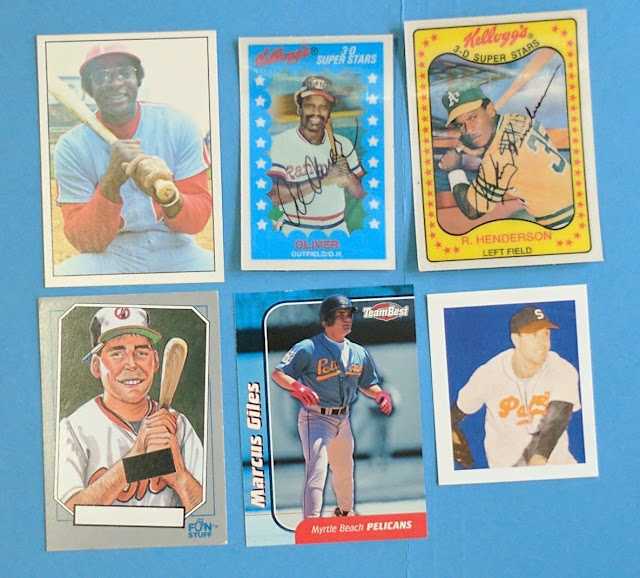 Some great oddballs here. Dick Allen SSPC, Al Oliver & Rickey Henderson Kellogg's. Nick must've seen the infamous Billy Ripken "fuckface" card on my wantlist and thought maybe this Fun Stuff parody would suffice.. haha, not quite, but neat to check out regardless. Also a couple minor league cards, with Marcus Giles in his days in Atlanta's farm system, and a reprint of an old Bowman PCL card.

And a trio of Padres with a Rollie Fingers reprint, a #'d Trevor Hoffman, and as promised, Brian Giles, featured on a slick acetate card.

Quick aside on Rollie Fingers. I had always pronounced his name like "RAW-ly" rhyming with the dog breed collie, but then I was watching something the other day and they pronounced it "ROLLy" like a "roly poly" bug, and my world was turned upside-down for a moment. A quick Twitter poll helps confirm that I was right, and it is in fact pronounced RAW-ly. 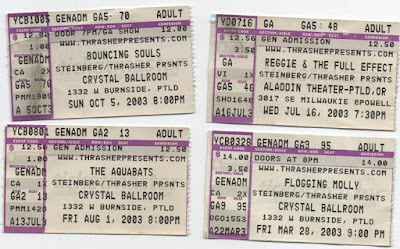 I'm only vaguely familiar with these 4 bands, but I know if you go to see any of them, you'd better wear your dancing shoes because they will get you moving with the upbeat party tunes.

One guy who seems to always have a fun time playing baseball is Manny Machado, and Nick gave a nice boost to my PC. 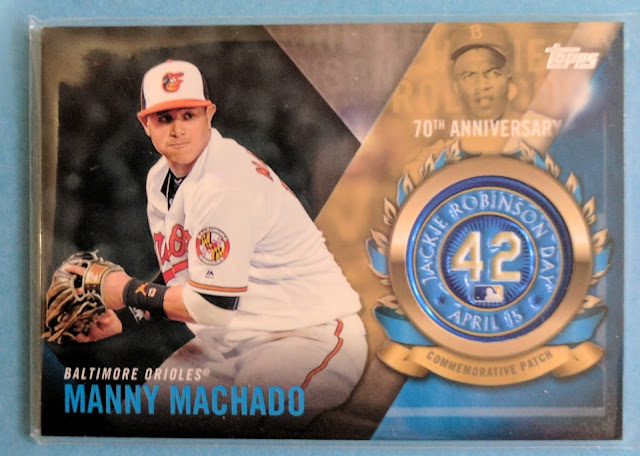 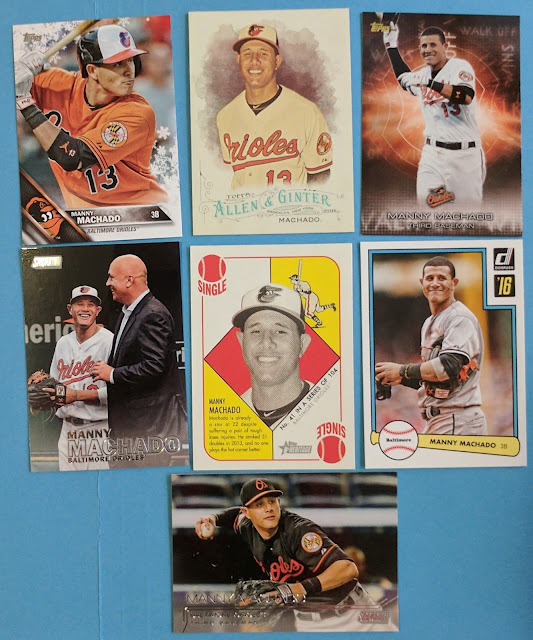 Some good stuff here, highlighted by the Jackie Robinson manurelic. 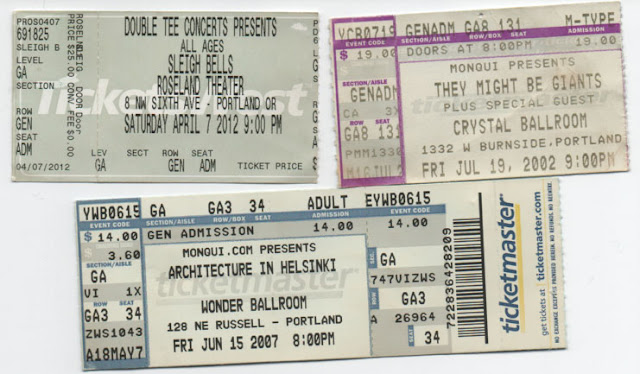 A bit jealous of my wife's concert-going adventures here, as I like these 3 bands, though I haven't seen any of them live. I'm especially a fan of TMBG.

Man, trying to link cards to ticket stubs is harder than I was anticipating, even with my half-assing. They Might Be Giants have thousands of songs, so I could probably find a clever one if I really dug in. Plus there's the hole "Giants" angle, but I already showed the Giants cards Nick gave me. I'm gonna take a pass and just show some various cards now. 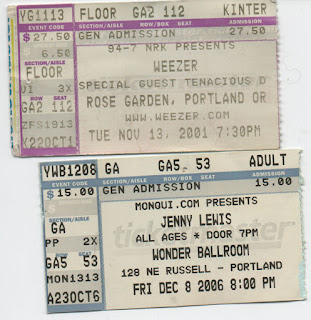 Now here are a couple acts I've seen live. I've caught Weezer a handful of times, and I've seen Jenny Lewis solo once as well as several times with her old band Rilo Kiley back when I lived in San Diego. Another guy who lived in San Diego is Adam Jones. 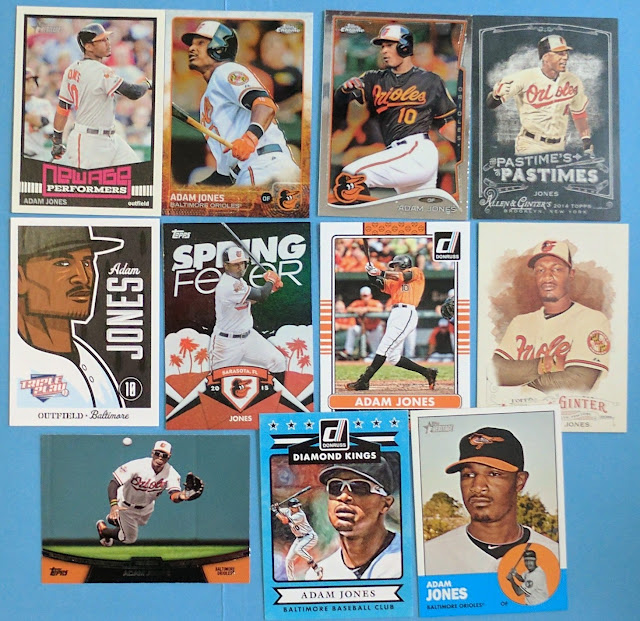 Nice bunch of cards for the PC. 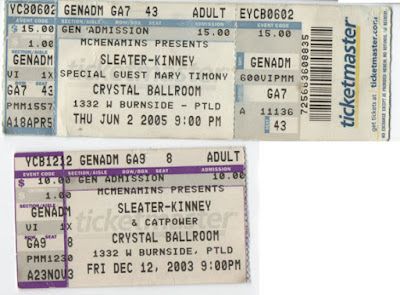 Sleater-Kinney is a band my wife really likes. I like them too, and we caught them on their reunion tour a while back (stub not pictured). I think I'm out of gas as far as linking to cards. Hmm.. these shows were at the Crystal Ballroom. Crystals are shiny. Ok, here are a few parallels, some of which are shiny. 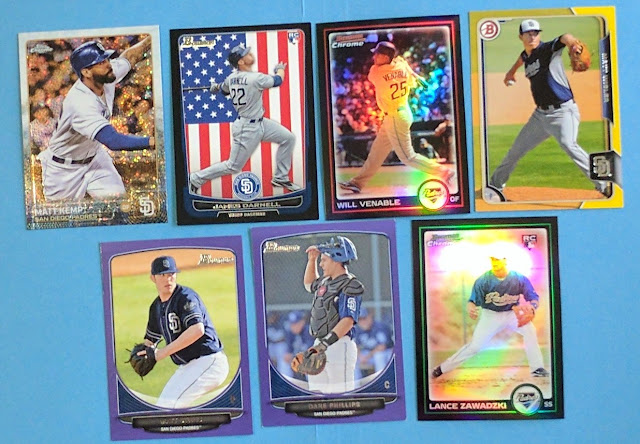 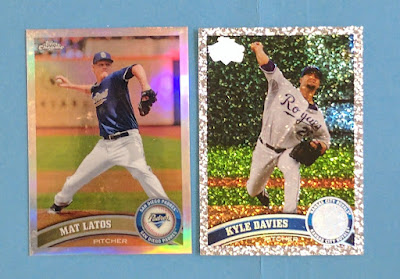 And a couple 2011 Topps parallels. Looks like I already had the Latos refractor, but the diamond Kyle Davies checks another one off my list. Closing out this post with a couple stubs from comedy shows. I didn't go to the Nick Kroll show, though I did tag along for the T.J. Miller show. Speaking of ridiculous things, a knuckleball is pretty ridiculous. 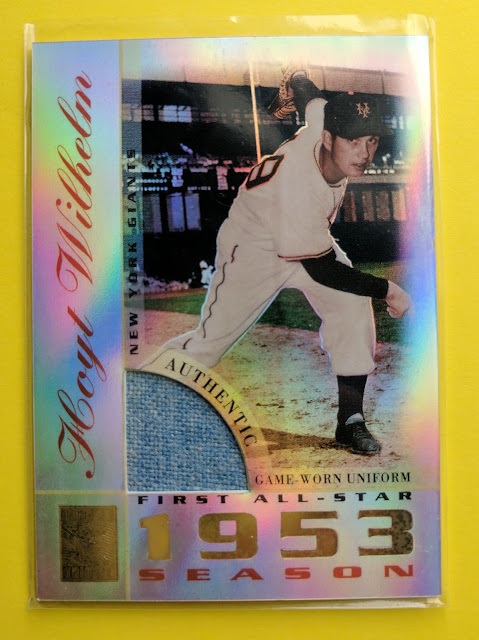 Big thanks for the awesome cards, Nick! I'll hit you back with a return package soon.

Aw, here's a note on the back of the Nick Kroll ticket my wife wrote me years ago. "Little M'LuLu" was a nickname for our first dog Lucy, and Lucky Lab is a pub near our old place with a dog-friendly covered patio. Good times.

Anyways, hope you enjoyed this look at ticket stubs from my wife and baseball cards from Nick.
See you next time.
Posted by defgav at 3:38 PM