Officially kicking off my 1957 Topps setbuild

While my main vintage setbuilding focus right now is 1965 Topps (thanks again to gcrl for helping me make big strides there recently), and then 1964 Topps a ways behind that, I went ahead and finally put together a list for the final vintage set on my cardboard bucketlist: 1957 Topps.

I've always been a fan of 1957 Topps. It's the first Topps set that features real color photography, and its unobtrusive design gives the feel of Polaroid snapshots from the game as it was at the time. Plus it's the first Topps set to use now-standard dimensions, so you don't have the size issues that are sometimes a hassle when putting together older sets. I believe it's also the first set to feature full career stats on the back, something I appreciate.

I've picked up a few cards here and there over the past few years, mostly from vintage common bins at the card show or the cheapest I could find on COMC. And back around the time I first started blogging, I bought a beat-up Mickey Mantle on eBay, so at least I have one of the big names out of the way. A couple notable cards checked off courtesy of traders are Whitey Ford and Hoyt Wilhelm. 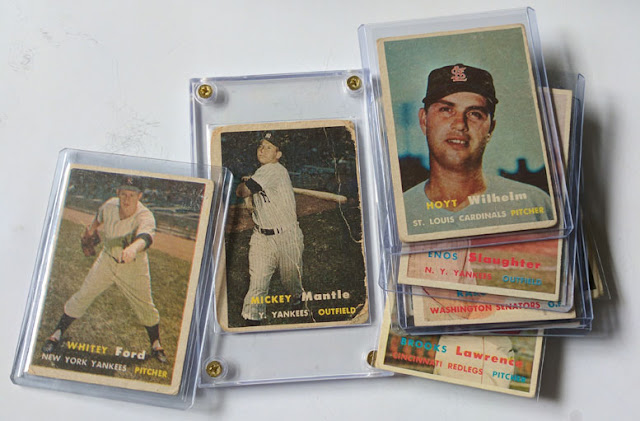 As the poor condition of the Mick will tell you (still wasn't cheap!), I'm not being at all picky about condition with my set. Any condition accepted! I won't rule out upgrading someday down the road, but it definitely won't be a priority any time soon.

The set is just 407 cards deep, so after the 752-card monster I battled not long ago that is 1971 Topps, this one seems like a cake walk, at least as far as quantity. As far as quality, there are some pricey cards in there such as Ted Williams, Sandy Koufax, Willie Mays, Roberto Clemente, Hank Aaron, Ernie Banks, etc. Plus rookie cards of Frank Robinson, Brooks Robinson, and Don Drysdale to name a few.

My list shakes out to 417 cards after including the unnumbered checklists and Bazooka contest cards (not sure if I'll bother with these ultimately, but I've included them for now), and one error/corrected variation.

Sorting out the cards I already have, I'm just over 5% complete, with 22 cards in-hand.. plus 5 more sitting in my COMC inventory (one of which is a dupe I inadvertently picked up, which emphasizes the fact I was overdue for putting together a wantlist). This will be a slow-moving project, but hopefully it won't take me more than a few years to finish. (Let's set the tentative goal as the end of the decade.)

Anyways: my 1957 Topps spreadsheet.. feel free to take a look and please let me know if you've got any cards I need and want to see about maybe working out a trade. Thanks!
Posted by defgav at 3:20 PM