Yesterday I showed off the sweet Sandy Koufax autograph I just picked up. You may have caught the allusion at the end of that post as to what was coming next. Yep, I got a Vin Scully autograph! 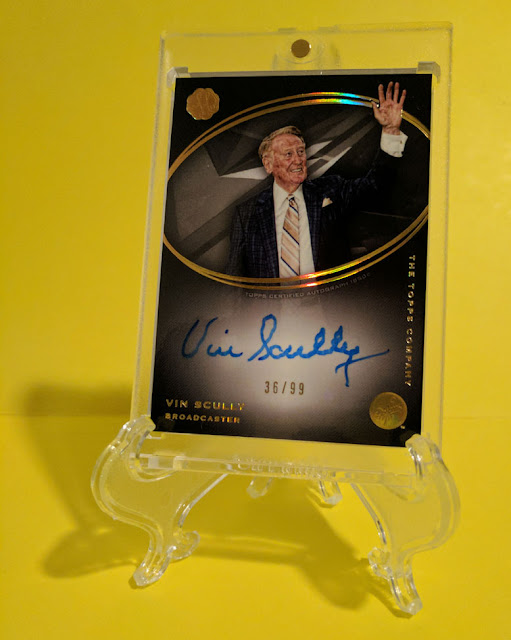 Boom! This is one of those cards that when it shows up, it sort of feels like it gives your collection closure.. Like I could stop collecting right now and my collection would feel complete.

You might remember I got a box of 2016 Topps The Mint for my birthday a few weeks ago. The claim to fame for that high-end product was that it included the first certified Topps autographs of legendary broadcaster Vin Scully. (His first Topps card, period?). I was hoping to pull one, but came up empty.. not that I can complain about a pair of Mike Trout autos. 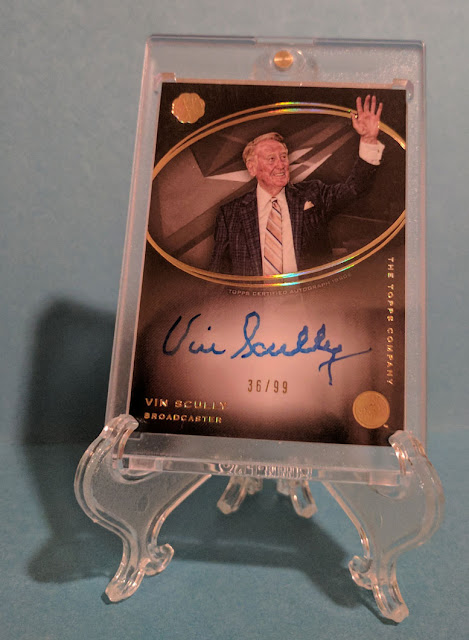 So I had been keeping an eye on eBay for reasonably priced opportunities, and placed some hefty bids that weren't enough. I nearly landed his auto from 2016 Topps Transcendent, though I don't really like the open-mouth photo on that one and if I ended up getting it, I'd probably make a custom overlay for it with a better picture. But eventually I came out on top for this card from The Mint. Thanks again to my bonus check helping mitigate the financial impact of this pair of splurges.

Obviously I don't identify as a Dodgers fan, strictly speaking. I've always considered myself a "Baseball Fan" #1, and then "Padres Fan" #2. The variety of cards I show off on this blog is proof of that. And Koufax and Scully are two guys that, if you love baseball, you love them.

Vin has been there since day one for all of us here on the cardsphere. He worked his way into pop culture.. I love his pseudo-appearances on The Simpsons (impression by Harry Shearer). I watched a lot of Dodgers games in the last couple years via MLB.TV, even more than I watched my own Padres, just to bask in the glory of his voice and storytelling as much as I could before his retirement.

It's going to be sad without him painting the picture unfolding at Chavez Ravine for us starting this season. He really was the last of the classic old-timey guys active in the game. But we've got to appreciate him keeping at it for so long. All the best to him enjoying his twilight years with his family. I'm very glad I was able to land this auto when I did to sort of commemorate the end to an era.

Hopefully he's included in Ginter this year, so people won't have to shell out a big chunk of change to make a similar gesture. He's gotten 2 or 3 Topps cards since the Mint card, but only autos in high-end products so far, which kind of sucks. I know he's got 2 or 3 Panini cards out there, but he deserves an appearance in a mainstream Topps set. It's surprising he didn't get a Topps Now card last year.

I know today is a big day in the card world, with 2017 Topps Series I officially on shelves, but I really have no interest in it. I don't like the design. Hate the truncated stats on the back. Yet more reprint inserts. Yet more buybacks. Yet more cards beating the dead horse that is the 1987 Topps design. I can't see myself buying any flagship this year. And I haven't really been impressed by the previews for anything else forthcoming either, including Stadium Club. I think it'll be easy for me to stick with my plan of not buying any new boxes this year besides Archives (which is mostly just out of loyalty at this point, since it's the set that got me back into the hobby-- or per the marketing Topps is shoving down our throats this year: it's the set that helped me REDISCOVER TOPPS®-- plus I pulled that 1/1 Junior auto from Archives last year, so...).

But man, oh, man, I love Vin Scully! Great to now have his autograph in my collection. 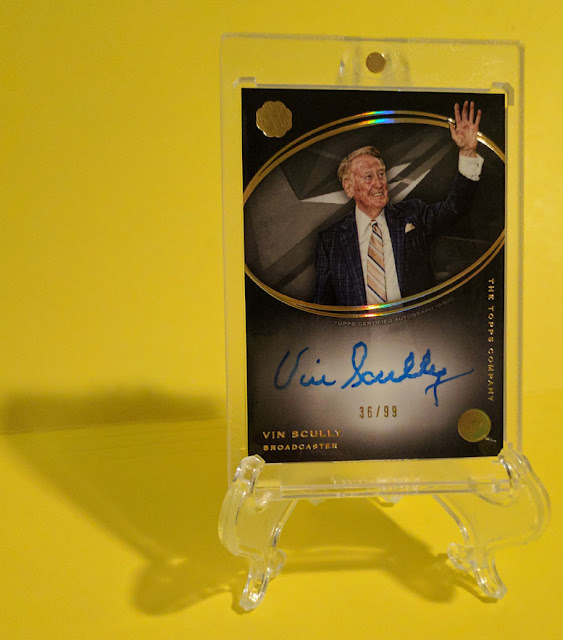