Excuse a quick non-sports post. My wife and I had a busy weekend watching a lot of live comedy shows. For her birthday, she had asked for a couple passes to the 2017 Bridgetown Comedy Festival. It turned out being a great idea and we had a lot of fun. This post is basically just documenting the experience for posterity for me. 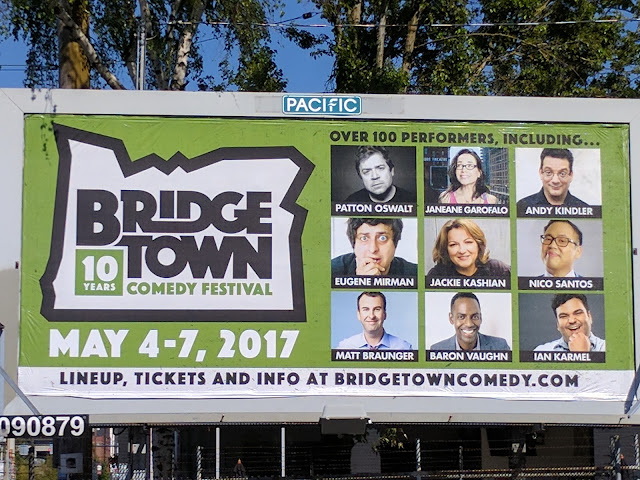 Here's a billboard touting the big names. The festival is spread out over several different venues around town.

Here are the shows we saw:

Festival Opening Show
Thursday 7:00 pm - 8:30 pm
Price: $20
Let's get this party started! We put together some of our favorites to kick off the first full day of the fest.
The Portland Mercury Stage at Bossanova Ballroom

My notes: These guy were all pretty funny. Of course the big name is Janeane Garofalo.. she's been in lots of great stuff over the years, including guest spots on a couple of my favorite TV shows, The Simpsons and Seinfeld. It was kind of a trip to see her up close, making occasional eye contact with me while she ranted. Her set was a little all over the place, and she apologized saying her performances are hit or miss. But it was still enjoyable. Unfortunately I forgot to take any photos at this show.


Reunited!
Thursday 9:00 pm - 10:30 pm
Price: $25
Reunited! brings together the casts of beloved sitcoms for in-depth panel discussions, Q & A sessions, and table-reads of classic scenes. The catch? The shows never existed, except in the minds of hosts/show-creators Josh Androsky and Bryan Cook.  Additionally, none of the guests have any prior knowledge of the series they “starred” on. This show was one of the biggest hits at Bridgetown 2016, and we made it even better this year!
The Portland Mercury Stage at Bossanova Ballroom 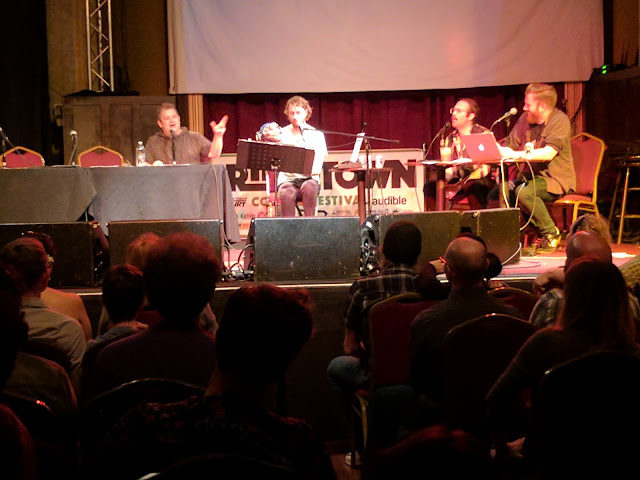 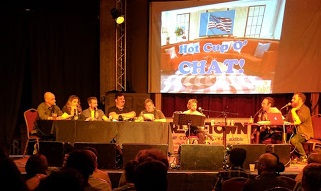 My notes: Some pretty funny moments, though overall not my favorite show of the weekend. The highlight was getting to see Patton Oswalt, though I'd have preferred to catch him doing standup instead of this panel type format. 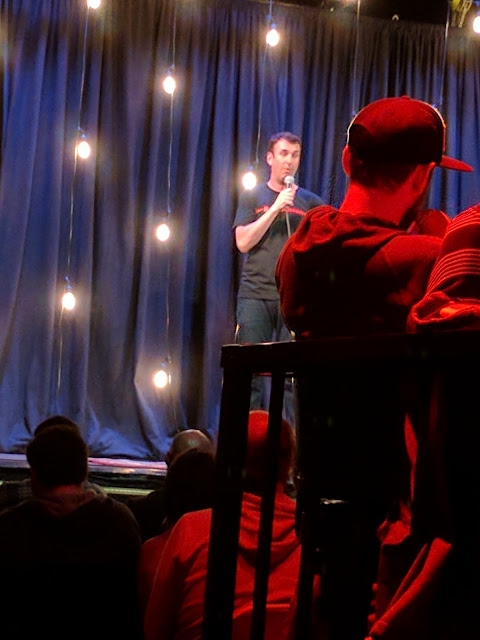 My notes: This was pretty great. Matt Braunger is really funny.


Ex Ports
Friday 9:30 pm - 11:00 pm
Price: $15
Portland opens arms to embrace the comic treasures that once graced our city and have now moved on to seek fame and fortune. Welcome back!
Siren Theater 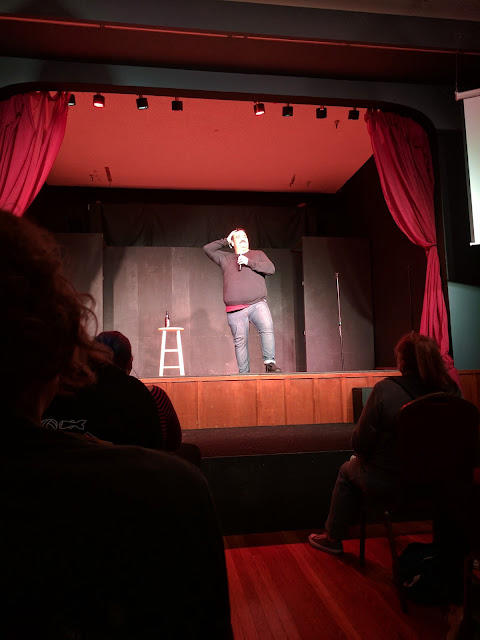 My notes: Probably the best show we saw. Ian Karmel (pictured) was great. Shane Torres wasn't scheduled, but did a surprise set that had me laughing the hardest I did all weekend. All the comedians were funny, with really the only knock being that Amy Miller did pretty much the same set we saw her do a day before, but I guess that's gonna happen when you see someone perform twice in a weekend.. It wasn't the last time we had to watch repeated jokes from comedians we saw twice. Another notable thing to mention is the bathroom in this venue takes a comically long trek to get to. Once you finally get there, there're complimentary pins saying "I found the bathroom at the Siren Theater!"


Audible Presents Hold On with Eugene Mirman
Saturday 8:00 pm - 9:30 pm
Price: $20
Storytelling aficionado and inquisitive host Eugene Mirman (Bob’s Burgers) sits down with special guests and pauses their true, entertaining, and personal stories to get the funny details they might have left out. Listen now in Audible Channels!
The Portland Mercury Stage at Bossanova Ballroom 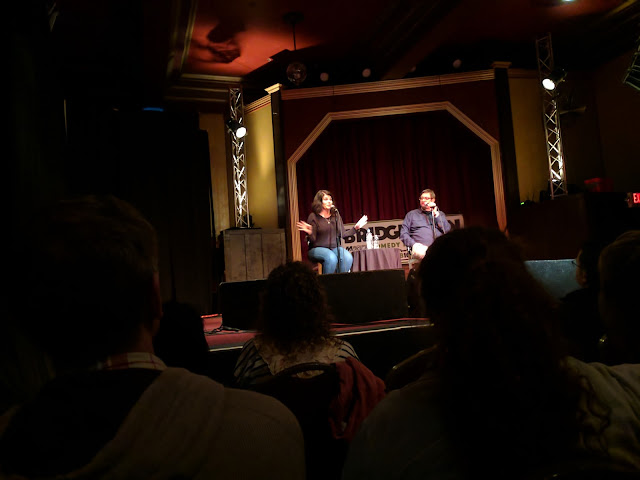 My notes: This was a really good show. I've been a fan of Eugene Mirman for a long time. Karen Kilgariff (pictured, whom I'm most familiar with from Mr. Show) and Kyle Kinane were also cool to see live.

Brunchtown!
Sunday 2:30 pm - 4:00 pm
Price: $10
You can't have a Sunday at Bridgetown without a brunch show. How about two of them!
We're serving up some hot jokes and you won't have to wait in line (well, not for long).
Analog Theater

My notes: Another very funny show. The Sunday shows seemed a bit less crowded, which was appreciated. Some of the previous shows, we had to stand because all the seating had been taken. I'm getting too old to stand around for too long.

After this show, we had some time to kill and grab drinks and dinner before the next show which was at the same venue. We ran into April Richardson outside, who was one of the funniest performers we saw all weekend, and one of the people my wife most wanted to see. I asked for her autograph and she kindly obliged. 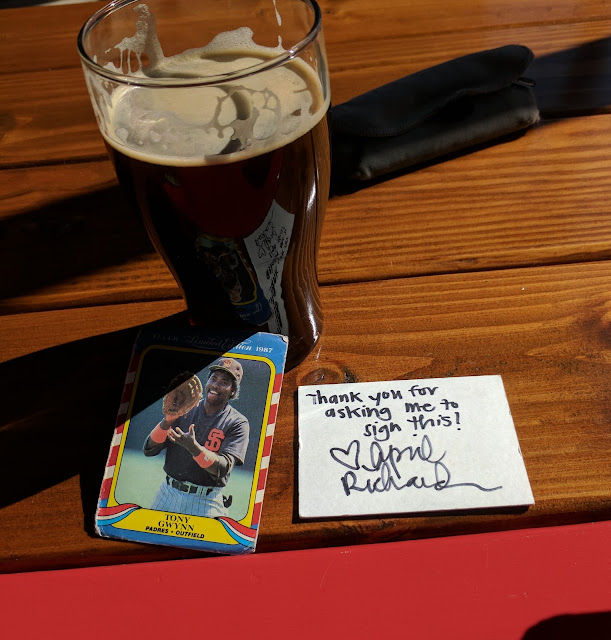 Here's a Wallet Card pic with it, along with a tasty Anaphylactic Peanut Butter Porter. I had a blank card in my pocket the whole weekend, hoping to run into somebody to get an autograph from, so I'm glad that worked out.

Thanks again to April for taking a moment for me. She's really funny (and easy on the eyes). I forgot to take any photos at this show, unfortunately. She's on @Midnight on Comedy Central tonight.

My notes: This was a good show to close out our weekend with. It was a little sparse at this point on Sunday evening, so I sat up front and took a few pictures. Hampton Yount was the main draw for me, since I'm a big MST3K fan, and he's the new voice of Crow. He was really funny, as were the other comedians.


So yeah, that was a fun weekend. We would have liked to have seen even more shows, but it was tough with conflicting schedules and whatnot, plus we like to sleep, so we shied away from late shows and tried not to over-do it. 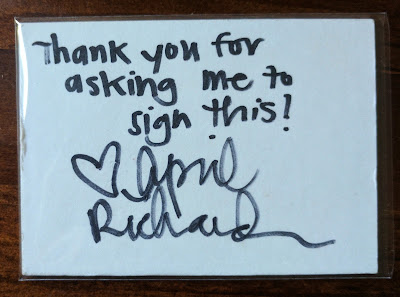 I'll leave you with a better look at my first in-person autograph of 2017.

Thanks for reading! Back to baseball next time.
Posted by defgav at 4:07 PM