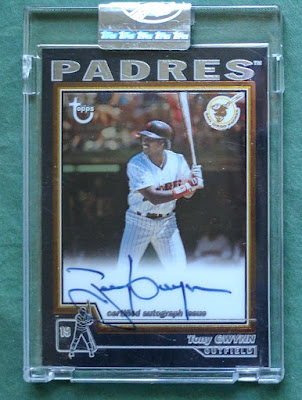 I wanted to get this post out under the wire for eligibility in Collecting Cutch's "show off the top 10 cards you've got of your favorite player" contest. I feel a little greedy even entering after just recently winning one of his other contests, but dang it, he's offering up some high quality shit for prizes! Gotta take a shot.

I'm going to make it a little easier on myself by making this list AUTO ONLY rather than grapple with the dilemma of whether I like the look of a base card enough for it to compete against hits. (And relics are in limbo somewhere between since I don't really have any sick patch cards or anything too fancy.) I intend to do a Top 10 for my non-auto Tonys later on after I've finished my big Gwynn PC sorting project. 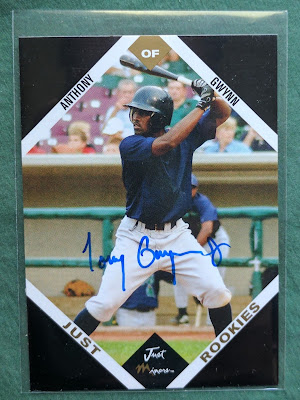 Sorry, I had to cheat here. I only own 9 autographed cards of Mr. Padre, so I had to turn to his offspring to fill a list of (technically speaking) ten Gwynn autos. I believe it's my only Tony Gwynn Jr card, but it's a nice one, numbered 1/25 on the back. I hear he's been putting in some time as a color commentator on Padres telecasts this season and getting good reviews, though I haven't been lucky enough to catch him on there yet. 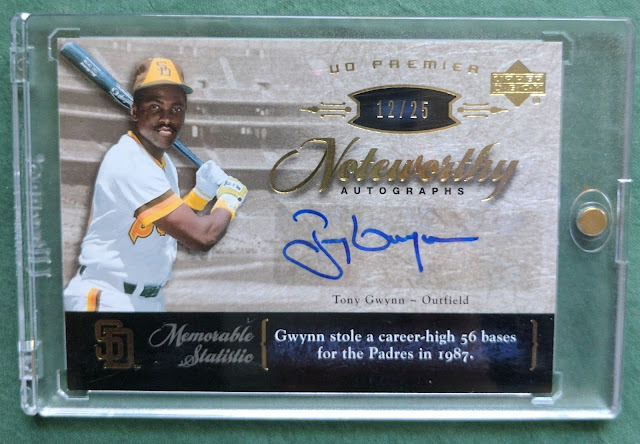 I feel bad ranking this one so low. It's a fine looking card.. and a Christmas Card, to boot! But it loses points for being a stickergraph, and the stat part at the bottom seems to clutter up the design; should have left that for the back, not the front. 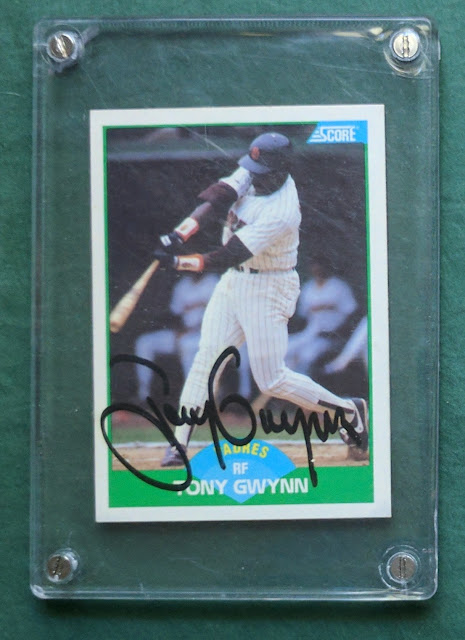 Few cards in my collection have more sentimental value to me than this '89 Score. My best friend Doug got this card back in middle school (circa '91), probably as a birthday gift, if I recall, bought by his dad at the LCS, PB's Baseball Cards. Our little group of friends was very envious of it! Eventually, Doug got out of collecting and somewhere along the line (high school), we worked out a deal where he swapped the card to me. I think I lent him some money or something and he ended up giving me this card to square us.

Let's put the 2004 Topps Retired card here (shown at the top of this post). It's a great card, but somewhat redundant in my collection now due to another card coming up later in the countdown. 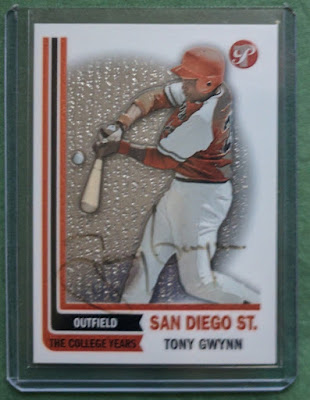 Here's another uncertifed auto. The signature is pretty faded, but I still love this one, being a sucker for any SDSU cards of Tony. 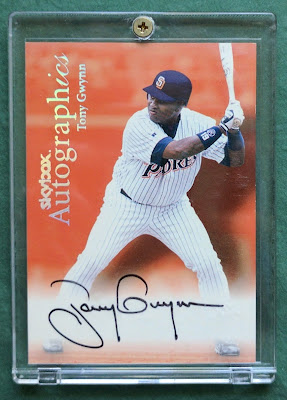 This was my first certified Gwynn auto. Funny enough, it's the only one I've got featuring a photo from the latter half of his career. Won it on eBay for the price of a blaster a couple months before he passed away. 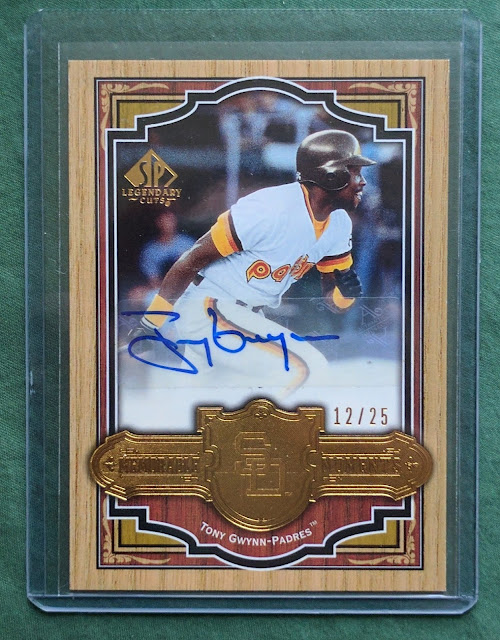 I love this card! It features my all-time favorite uniform, plus it's a Christmas Card.. similar to card #9 on this list in these respects, but the design's wood border and gold foil make it look like a cool little plaque. If only the signature was on-card, this might have contended for the top spot on the list. 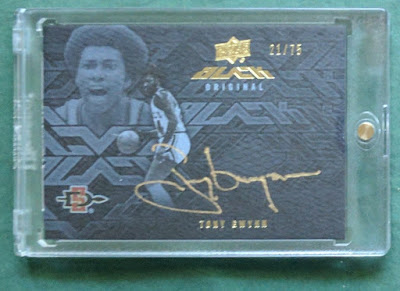 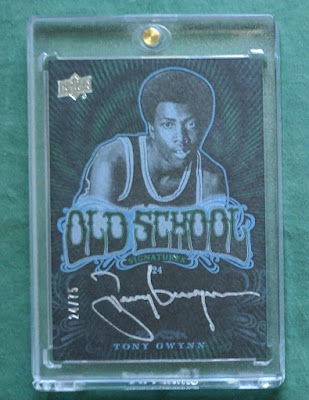 And here's a similar card, but with silver ink. I gotta rank this one a little higher due to the funky "Old School" vibe. Plus it's #'d 24/75, and 24 was Tony's jersey number on the hardwood. 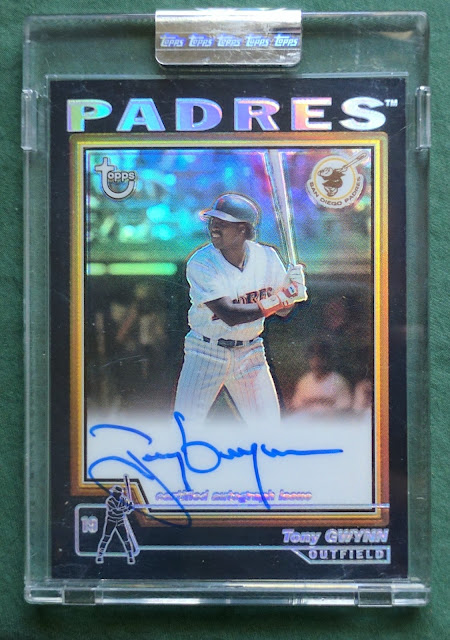 The top spot has to go to the 2004 Topps Retired refractor auto. These are among my favorite cards ever, so add to that my favorite player ever, and this is likely my favorite card in my collection, if I had to narrow it down just one. 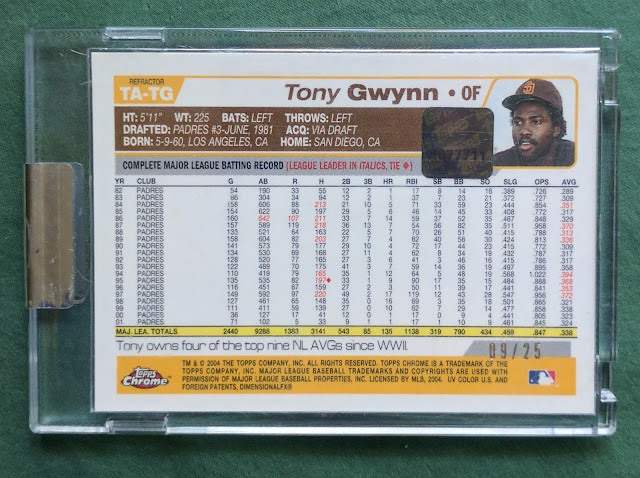 Thanks for reading!
Posted by defgav at 3:53 PM