Is this a sweet lot of 2017 Topps? Judge for yourself

The handicap of now being a one-vehicle household is hitting me for the first time this weekend. My wife needs the car for an appointment Saturday on the other side of town that can't really be changed and it also happens to be the day of the monthly card show. So unless I want to mess with hauling cards around on public transportation, looks like I'll be sitting this one out. And really, it's probably for the best if I miss this show. I still need to sort the cards I brought home at the last couple card shows, not to mention all the incoming trades and such from the past couple months.

Plus, thanks to the big lot that Padrographs Rod gave me at the last show, I feel like I got enough new cards at the April show to carry me through May, too. Let's check out more from that fantastic lot now. Today, it's highlights from the ample selection of 2017 Topps Series 1. 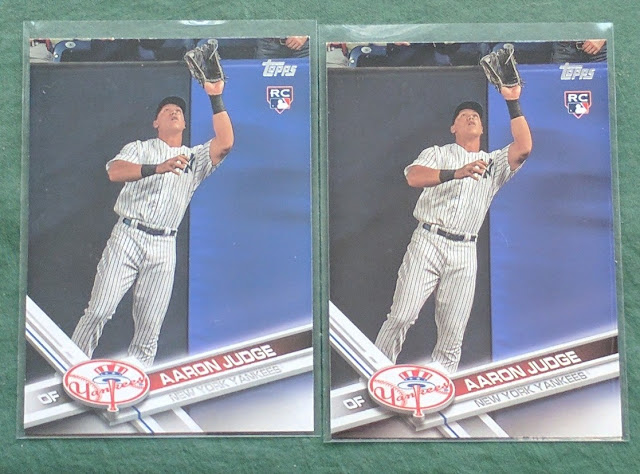 Wow, the hottest base card of the year, and I ended up with two of them falling in my lap! That's pretty lucky. Aaron Judge has been running away with AL ROY so far this season-- hell, even making a strong case for MVP-- with Yankees fans hoping he can keep up his impressive performance for the long term. 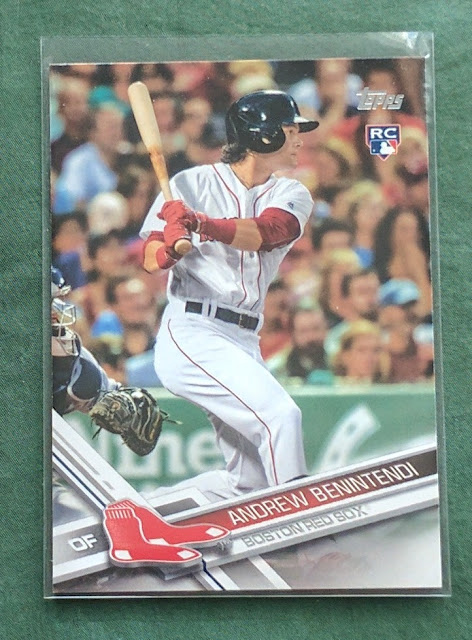 Andrew Benintendi is another hyped rookie in the AL East. 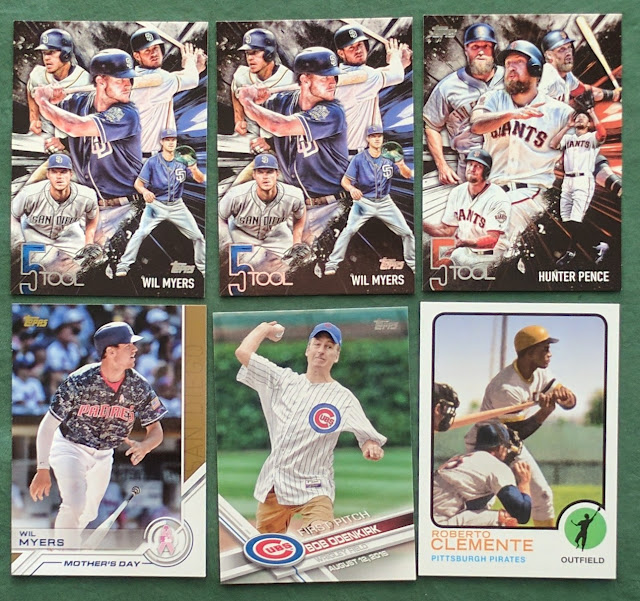 A bunch of inserts, heavy on Wil Myers. I love Bob Odenkirk, though I haven't watched Better Call Saul yet. 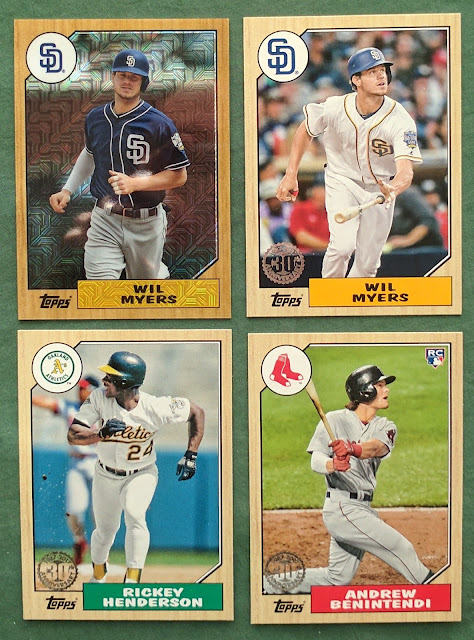 Take a trip back to 1987 with the nice selection of retro inserts. 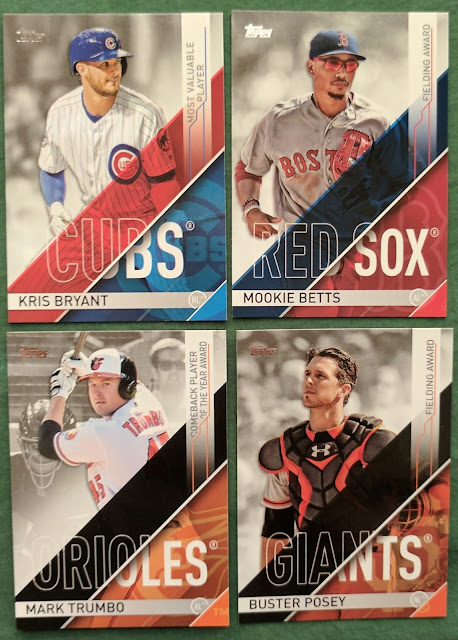 These Award Winners inserts are ok. 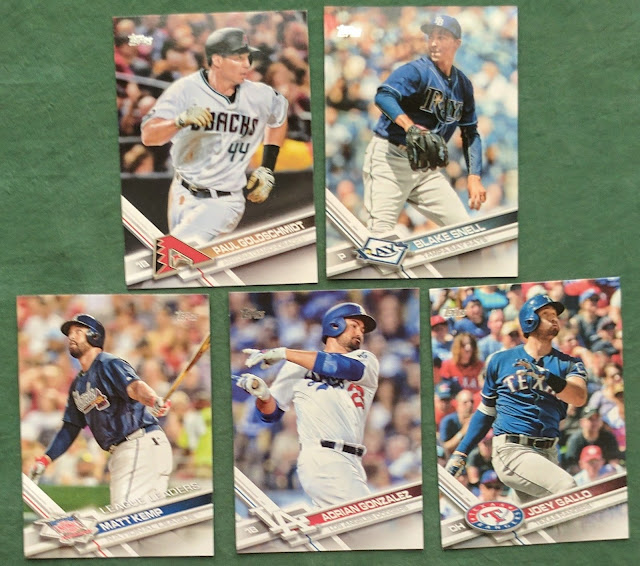 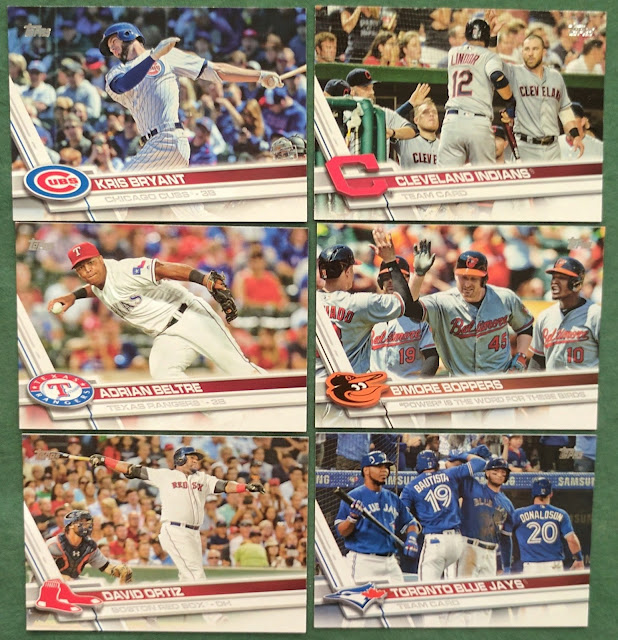 More dudes I collect, plus cameos on team cards, which I sometimes throw into PCs if the guy is featured prominently enough (The Orioles card could slip into my Adam Jones PC, but not my Manny Machado PC, for example). This design doesn't work very well with horizontal cards, as it takes up way too much space on the bottom. 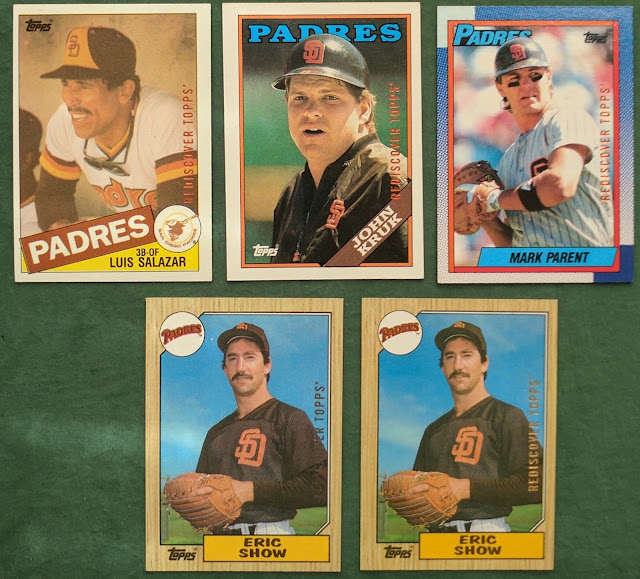 Here are some buybacks. Rod undoubtedly got in a group break or two, explaining why they're all Padres. Some of these probably came out of 2017 Heritage, but I don't think there's a way to differentiate. I wish Topps would cool it on the buybacks. I kinda collect Kruk, so I'll hang onto that one, but the rest will likely make their way to buds who care about buybacks more than I. The Eric Show cards look like dupes at first, but one is silver foil and the other gold, despite how they look in the photo (the top row are all bronze). Assuming Topps uses the Olympic system, gold must be the most scare of these 3 stamp colors, though I'm sure only the most chronically obsessed collectors give even a tiny shit about buyback stamp colors. 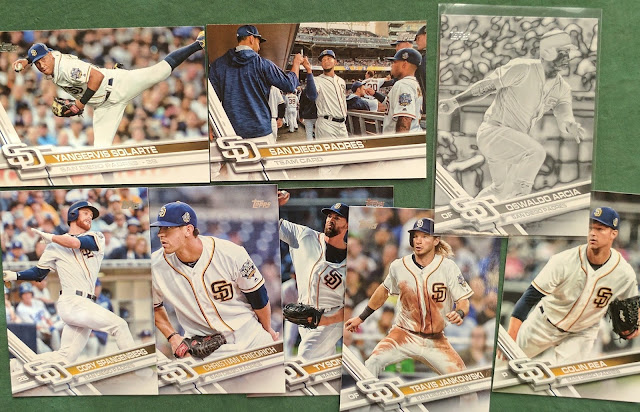 Again from group break hauls, there were several of each Padre base card, most of which I've already received through trades already, so not too exciting for me. Anybody working on this set, let me know and I'd love to thin some out on you (Padres and otherwise). 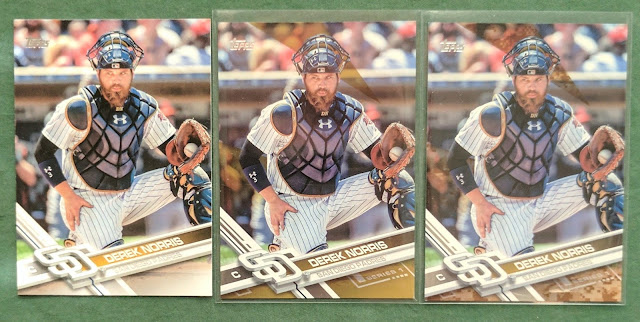 Finally, perhaps the biggest thrill of the entire lot for me. Here we have a partial rainbow of Derek Norris cards, with a base, gold, and camo. I don't really have strong feelings either way about Derek, and the parallels this year are very underwhelming. But.. 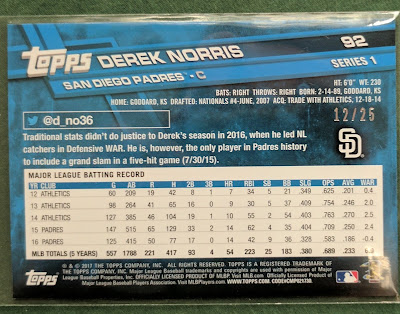 The camo parallel is a Christmas Card! And I'm pretty sure Rod didn't go out of his way to score this card for me, rather it was much more likely just serendipitously among his Padres group break haul. So that's pretty cool.

Thanks again, Rod! Very appreciated!
Posted by defgav at 4:01 PM