It's May 4th so it's time to get Star Wars jammed down your throat. I've gone on record as not particularly being a big fan of this neo-holiday, preferring to celebrate Star Wars during the Festival of Lightsabers (which takes place the week between Christmas and New Years). But whatever.. I happen to have some incoming Star Wars cards to post about, so might as well do it today, right?! 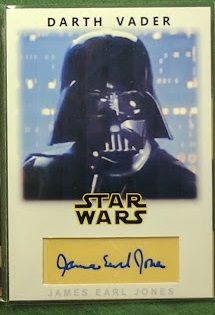 The big item to kick off with is an addition to my Darth Vader autograph booklet custom. Maybe you remember a few weeks ago when I posted about putting together this piece with a David Prowse auto card. Well, as I pondered in that post, I did soon thereafter pick up a James Earl Jones auto to add to the booklet.

That's pretty cool, I think! Nice pairing of the guy in the suit and the guy doing the voice. 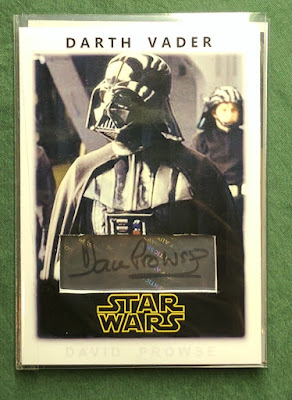 Here's the front of the booklet. 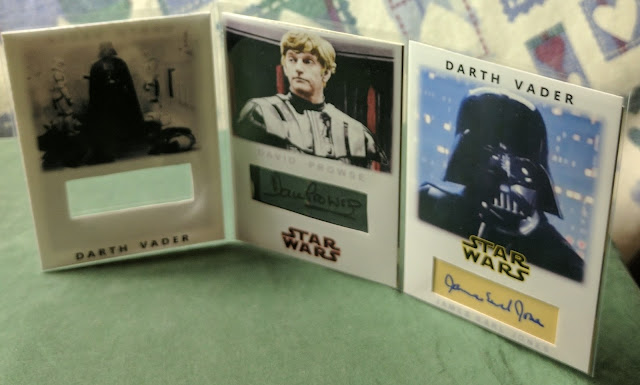 As with all my custom overlays, the custom card is just resting on a real card in the penny sleeve, a method I use to "improve" certified autograph cards without actually altering the original card and hurting any resale value. (Plus it's much cheaper than buying real Star Wars branded auto cards of these days.) This "booklet" is just the penny sleeves taped together, but I think it's neat.

As for other possible expansions to the booklet.. well, Hayden Christensen would be a possibility, but he seems to have very few certified auto cards out there, so they've very expensive (plus I don't care for him much, so I definitely wouldn't shell out anywhere near $800 for one). Jake Lloyd, the kid from Phantom Menace might be a stretch though technically portraying the same character, but again, very few certified auto cards of him out there. From the original trilogy, you've got Bob Anderson who did most of the stunts/swordfighting, and Sebastian Shaw who was the guy in the unmasking scene at the end of Jedi.. but both those guys passed away years ago, so they're probably not realistic for me to pick up autographs of, at least not for a reasonable price. Other than that, there are guys who put on the suit in recent movies and guys who did the voice in recent cartoons.. neither of which interest me all that much. So I'll most likely be happy with this duo representing the character of Darth Vader.

Ready for the dramatic unmasking of the overlay? There's a hidden surprise.

Yep, funny thing about this James Earl Jones auto is that it's a dual (sticker) auto with Martin Short. I think that helped keep the price down, since Star Wars fans would probably prefer a card that isn't contaminated by a non-SW guy. But hey, since I'm making a custom overlay for it, it's totally cool for my purposes. Even if the card also featured an auto of Jared from Subway or some jagoff like that, I wouldn't give a shit since I'd just cover it up anyways.

But that said, I do consider myself a Martin Short fan, so I'll take it as an added bonus. I might have to someday make an "alternate overlay" that I could swap out (playing "dress up" with my cards again). My favorite thing he's done is probably ¡Three Amigos!, but you gotta love his old SNL/SCTV stuff, and more-recently, his Jiminy Glick character and the show Maya & Marty which I haven't seen much of but have enjoyed the clips I've been able to catch.

Per the text on the back, this card links the two actors together because of the 1989 film Three Fugitives, which I don't believe I've watched. The two starred alongside Nick Nolte in the crime-comedy, and from what I can tell, it was a stinker of a flick. If I were to make more "alternate overlays" for this card, I could again cover up Short and go the baseball route with James Earl Jones' roles in The Sandlot and/or Field of Dreams. But I'll probably just stick with the Vader.

Ok, now I've got more Star Wars cards to show off. Don't worry, it's not a trap. 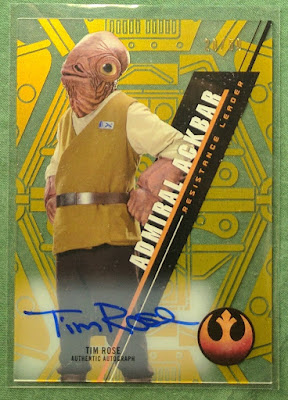 No custom overlay needed here! I picked up this Admiral Ackbar on-card Tim Rose auto from Topps Tek on eBay not long ago. Timothy D. Rose is the guy in the suit (and apparently is the only guy to physically portray Ackbar, from Jedi through the recent films, even at 60 years old now). The guy who originally did the voice (Erik Bauersfeld) passed away last year. I'd like to pick up an auto of his to complement the Tim Rose, but we'll see if I get around to making that happen. I think Admiral Ackbar is a fun little minor character.

And now here's a big lot of recent Star Wars cards that I got from 2 x 3 Heroes by calling dibs during his big holiday purge thing or whatever the catchy name Jeff calls it that's escaping me at the moment (Tis The Season?). This just arrived the other day, as it was delayed because I also had won a contest from Jeff and he was waiting on a surprise prize and understandably wanted to wait and ship everything together. I'll cover the contest winnings (baseball cards) in another post, but for today, here are the Star Wars cards... 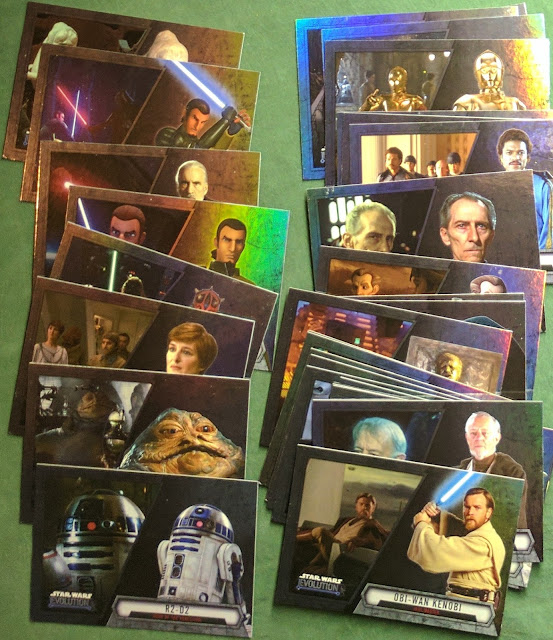 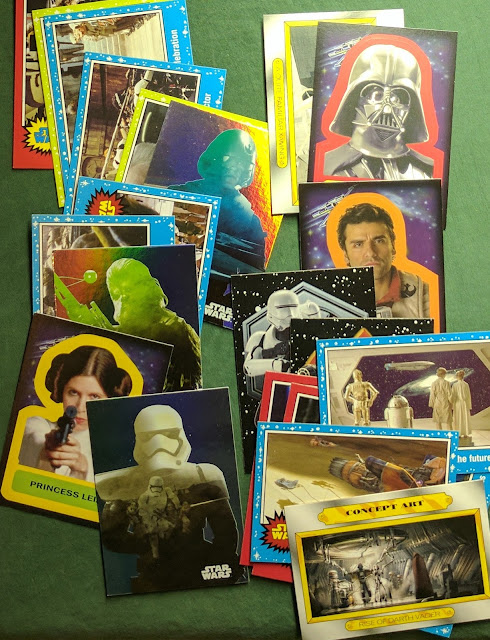 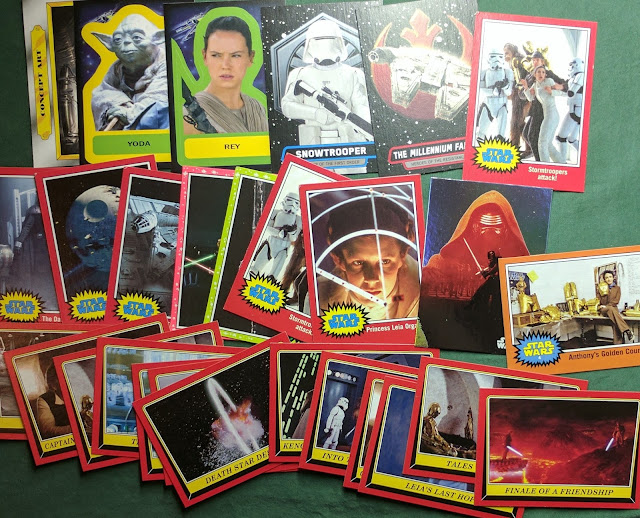 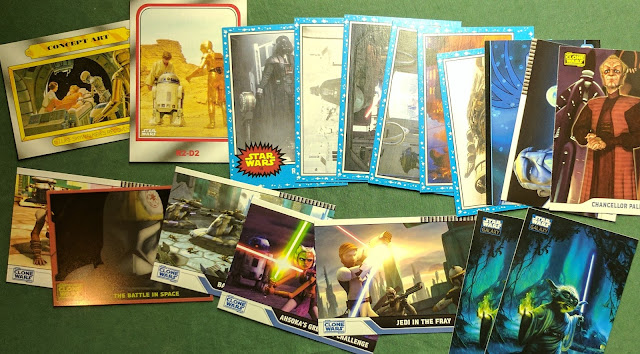 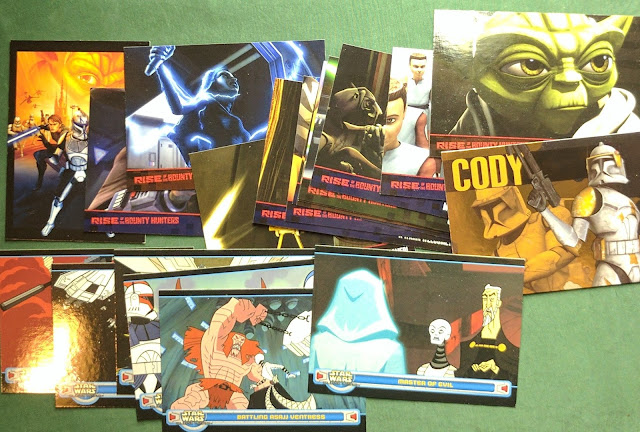 Very cool! Despite being a big Star Wars fan, I can't recall ever ripping any packs of Star Wars cards, though I like to add cards here and there when I can. This lot probably doubles the amount of Star Wars cards in my collection. Most of what I had previously was thanks to a lot from Billy at Cardboard History, plus a few from Zippy Zappy. I actually bought my first box of SW cards recently, the "40th Anniversary" stuff that just came out, but it was with my pre-order of 2017 Archives boxes, so I won't get it in-hand until Archives releases, which I believe is about a month away.

Anyways, Jedi Jeff snuck in a few more movie cards along for the ride... 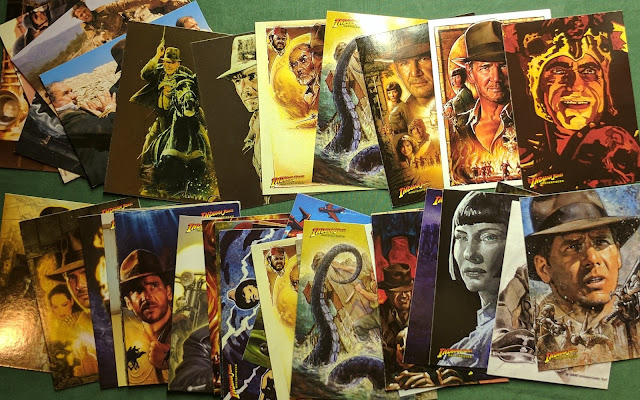 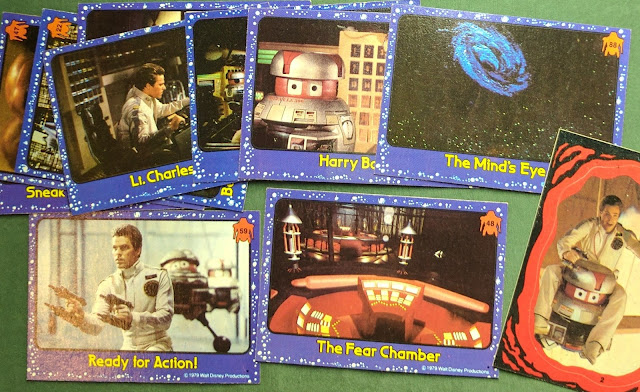 And lastly, here are some cards from a set of.. um, not sure what this is, to be honest. Buck Rogers, I think? Something I haven't watched. I'm not really a big sci-fi guy besides Star Wars.

Big thanks, Jeff! I'll round up a little thank-you for the great package soon.

Thanks for reading.
Posted by defgav at 3:01 PM