The earliest baseball cards I ever had among my toys as a little kid were a few Oakland A's 1980 Topps cards I got from my friend William. I talked about them a little in my big post years ago telling the story of how I got into collecting originally, and then back into it again as an adult. I really should do a follow-up on that post one day, since a lot of it is outdated now. For instance, in that post I say I don't really follow current baseball anymore, and at the time, didn't really collect current players much.. and that's definitely not the case these days. After a year or two back in the hobby, my interest in baseball happenings was rekindled.

Anyways, the point is 1980 Topps has a sentimental place in my heart thanks to being the first cards I can remember owning as a kid. A few weeks ago, the Tim Wallach collector mentioned he came into a big lot of cards he had little use for and would be glad to see go to a collector who needed them rather than waste away in his closet. Among them were a big lot of 1980 Topps. I figured this was a sign I should go ahead and officially make 1980 a set I intend to complete. 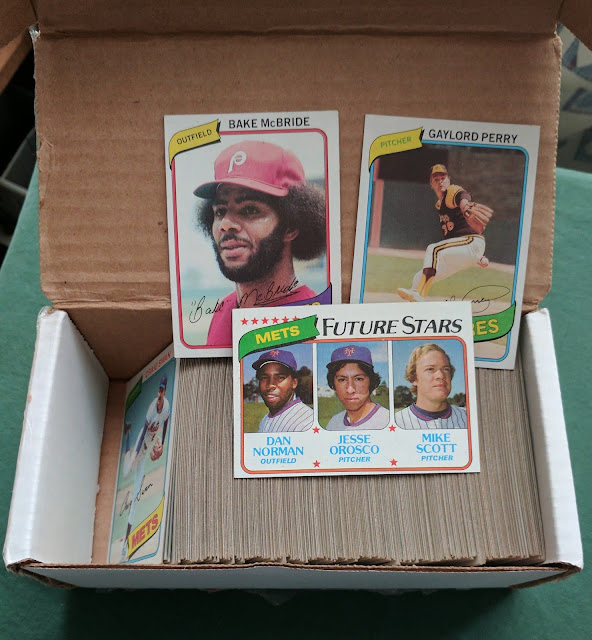 He kindly sent me a nice starter set of about 300 cards. Add to that the few cards already kicking around in my collection, and I'm probably about halfway to the set's 726 cards. I would like to get another big bulk lot or two before I bother getting everything collated and typed up into a wantlist.

So I'm putting out a call for 1980 Topps. Got a brick of them you wanna get rid of? I'll take them! I know the cards generally aren't worth much, but I'll try to send you back some cards you'd like to at least cover your postage considerations.

I already have the Rickey Henderson rookie (as mentioned in that old post), the lone card in the set that'll cost you much, so I'm good there. I suppose it'd be nice to get a 2nd copy so that I can have one in the Rickey PC and another in the set, but I probably won't worry about that unless one falls in my lap.

Well, big thanks again to Mr. Stackhouse for the cards. As always, I'll keep an eye out for more Wallach cards to send ya.

That's it for today. Please get in touch if I can take some bulk 1980 Topps off your hands!

P.S. While I'm at it, here are some additional inexpensive "maybe one day I'll go after building that" sets in the back of my mind:
1983 Topps
1984 Donruss
1985 Donruss
1984 Fleer
1977 Topps (my birth year set)
1990 Topps (my first year really collecting)
1982 Topps (ripped a lot of this as a kid)
But hey, please do not send me any of these commons UNLESS you've got a brick of them to get rid of.. like a partial set you don't want. I'm not collecting these until I have a solid starter set (if ever).. I'd rather not have singles trickling in yet, not to sound like a douche. And please don't bother sending me any 1990 Topps, period, as they aren't worth what it'd cost to mail them. Maybe I'll pick up the set for $5 at a card show someday.

Email ThisBlogThis!Share to TwitterShare to FacebookShare to Pinterest
Labels: 1980 Topps