When I got down to a magic number of 13 needs left for my 2004 Topps Retired Refractor Autos quest-- my #1 collecting goal-- I worried that I might be struck with some bad luck for the next card in my crosshairs. And guess what! I was right!!

Triskaidekaphobia creeping in or not, this little bugger gave me a roller coaster of emotion over the course of a week.

First of all, this is a deceptively tough card in the 2004 Topps Retired autograph set. Though César Gerónimo isn't a Hall of Famer or all that big of a name these days, he doesn't have that many certified autos on the market, so they tend to sell for more than you'd expect. Armed with this knowledge, there have been a couple times in past years where I pounced on the base version of this card at an underpriced BIN for like $40 and then turned around and sold it for about twice that. And I'm not much of a "flipper" (very rarely will I buy a card with the intent to sell it) but I won't pass that up if it falls in my lap.

But I had never seen the refractor parallel available for sale before.

It popped up recent with a Buy It Now of $59.99 + $4 shipping. I clicked that buy-it-now button so fast! My heart was racing and my head was flushed like I was a preteen who had just asked my crush to the big fall dance. I was feeling pretty swell when the purchase went thru. But with a newbie eBay feedback score of just (1), I was nervous the seller wouldn't come through.

Then like an hour later, I got a notification that the seller had refunded me my money and cancelled the sale. CRESTFALLEN!!

A little while later I got a message thru eBay saying:
"I'm so sorry, I got my pictures confused when I was uploading this. The item that was shown in the product was already sold. I had gotten them mixed up because they looked very alike. I'll issue a full refund. Sorry again, this is my first day of selling items on ebay and it's still new to me."

Trying to play it reasonably cool, I answered back with:
"Oh no! Very sorry to hear that. I need this card for the set I'm working on. I was very excited to buy it.. Sad that it's no longer available. If you have any other similar 2004 Retired Refractors, I may be interested. Thank you."

Him:
"Yes, I'll let you know if I have any more refractor cards from 2004 to sell. I can contact the buyer who had bought the #20 Refractor off of me (he's a contact of mine on Facebook) and see if he's willing to sell it. He usually buys cards and sells them to other collectors."

Optimism crept in that there was a chance I might still end up with the card once the dust settled. Then he found me via my blog (props for that!) and emailed me directly, trying to sell me some overpriced Topps cards on my wantlist from the lates 70s and early 80s. I didn't bite on that offer, but let him know I was still very interested in the Geronimo refractor.

Oh and the guy's name on eBay and Gmail was different from his PayPal name. And despite his claim of a "photo mix-up" he never listed any other Geronimo autos that I noticed. So there were plenty of red flags going off for me. Seems to me he had listed a card for cheaper than he realized it went for and had some seller's remorse.

A few days later, he emails me saying, "I just received the 2004 Topps Chrome Refractor #20 in the mail today." (By the way, it was a Sunday afternoon when he sent this email.)

Long story less-long, he sold me the same card I had bought (originally for $64) for $84. But you know what?, the base version of this card sells comfortably over $100 these days-- the two most recent sales were both around $130 (print run estimated at /468)-- so I can't really complain about scoring the /25 refractor parallel for significantly less than that. I could have done without the games, stress, and extra $20 out of my pocket, but it all worked out in the end. I'm glad the seller worked with me, at least, and seemed like a good guy besides the possible shadiness. 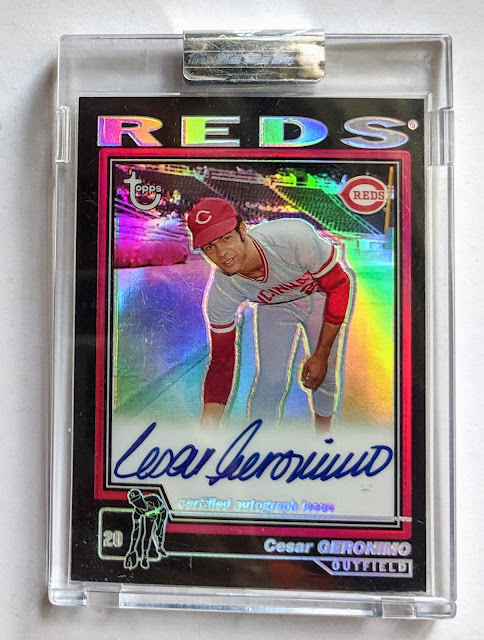 But anyways, it's a great looking card! 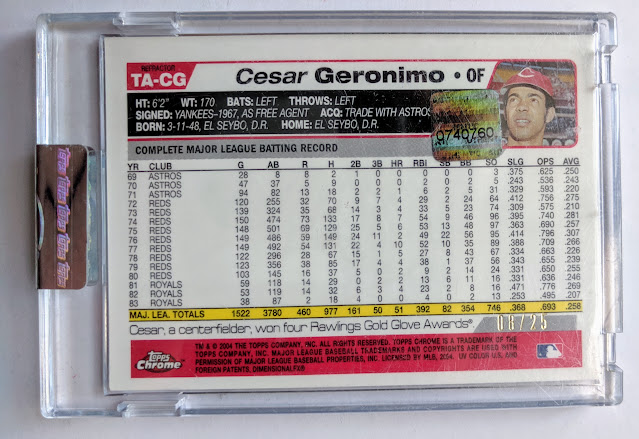 Geronimo had some solid years with the bat, but his calling card was his defense. Won four consecutive Gold Glove Awards in centerfield, '74-77. A key, unheralded gear in the Big Red Machine teams of the mid 70s.

This card is numbered 08/25 with a hologram number of 0740760. I'm not sure if Topps actually has a searchable database of hologram certification numbers (would be nice, tho!!), so that might be pointless, but I still appreciate the extra hurdle for any counterfeiter intent on making a fake one of these.

With this card checked off, I'm now down to a dirty dozen 12 cards left for my ultimate goal of collecting 2004 Topps Retired refractor autos. I'll keep at it, as long as I'm still breathing and have money in my bank account. Maybe someday I'll finish this off!
Posted by defgav at 3:31 PM