2004 Topps Retired refractor autos are my favorite cards. I always keep an eye out for them-- tryin' to collect 'em all-- and I finally landed this one the other day. I'm now down to a lucky 13 cards left in my quest. They can be tough to find, numbered out of just 25 copies each.

But back to saluting Graig... 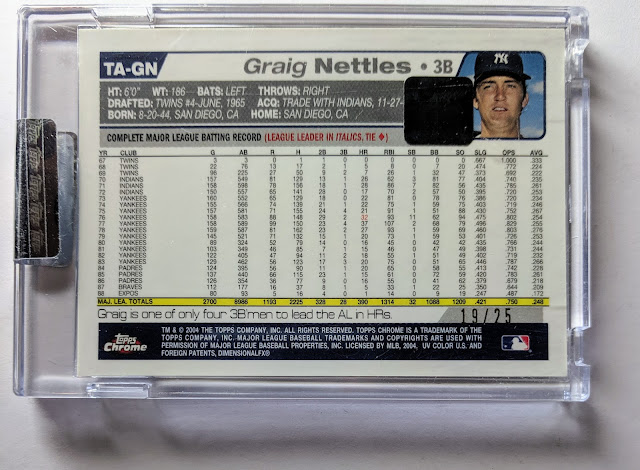 He's close to my heart as the 2nd best baseball player to ever come out of my alma mater of San Diego State University, in addition to sharing cities where we were born..

Here's a list of the top San Diego-born MLB ballplayers according to baseball-reference WAR: (This is in ascending order, not descending, because I'm not great at using stats sites, sorry.)

Being second to Ted Williams, and Tony Gwynn, in anything is surely something to be proud of. (And hey, Graig has 2 more World Series rings than the both of them combined.)

Graig Nettles should have legit HOF consideration thanks in large part to his power numbers (390 career taters) and his elite defense at 3rd base-- known as a "glove only" position for much of his career (Mike Schmidt and Eddie Mathews notwithstanding)-- not to mention his postseason prowess (WS champ in '77 and '78, plus ALCS MVP in '81). Hall of Stats has him comfortably enshrined with a ranking of 126 out of the 232 eligible ballplayers deemed worthy of induction. But his lifetime .248 batting average turns off Cooperstown voters. Oh well, maybe someday they'll take a deeper look at his stats and rightfully put him in.


As for the title of this post, it's a reference to a favorite episode of an all-time favorite show of mine, The Mighty Boosh, a BBC offering from 2004 to 2007 (currently available for streaming on Hulu). It's a must-watch if you're into silly, absurd stuff.

Thanks for popping by.
Posted by defgav at 10:33 PM