Search for the elusive 1990 Donruss

Funny enough, I find myself in a situation where I need some '90 Donruss cards. Dennis at Too Many Verlanders was kind enough to send me what he thought was a complete set, but it was missing a few random cards. (I got my revenge on him by giving him a custom with a glaring typo.. *evil laugh* --no, j/k, it was an honest mistake and I feel like an idiot about it.)

As I mentioned buried somewhere in the muck of my previous post, I'm celebrating 30 years as a collector this year. All major brand card designs from 1990 have at least some sentimental attachment to me, as I tried to sample a little of everything on card shop shelves that year, my insatiable first immersion into the hobby. So even routinely mocked sets like '90 Topps, '90 Donruss, and '90 Fleer are old chums to me. So with that exposition out of the way... 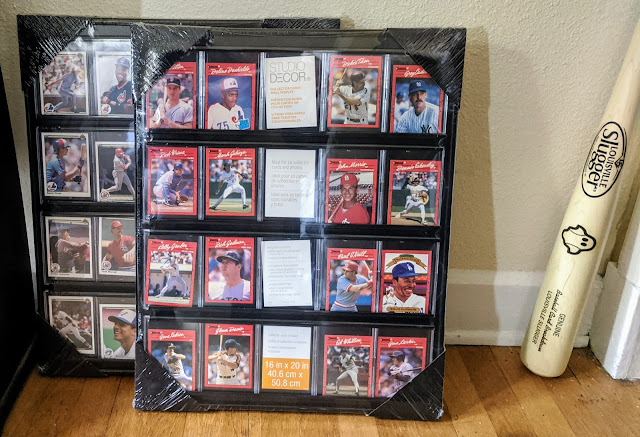 My lovely wife got me a couple card frames at Michaels for my birthday. One is filled with '90 Donruss and the other with '90 Upper Deck. I'm excited to fill these up and find a place to hang them, though I haven't decided on any themes yet. I wouldn't want to put in any high-dollar cards in there for fear of them fading in the light over time, though I guess I could hang it in a relatively dark location and rotate out cards every so often. Actually, this post has given me the idea to fill up a frame with all "random" cards from 1990 from 20 different sets. That could be cool and fit into my whole "celebrating 30 years as a collector" thing I mentioned.

But back to the task at hand.. Sadly, none of the 90D on display here are on my needs list.

It just so happens that I have 3 unopened packs of 1990 Donruss in my very small cache of unopened product. They were all thrown in by traders over the past few years. I've just been saving them for a rainy day rip or failing that, a reason to want to open packs of 1990 Donruss. And hey, seems like the time is here! 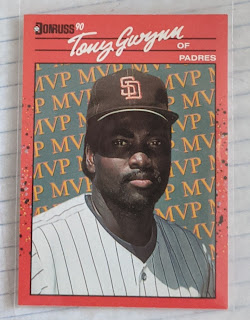 Let's see if I can hopefully cross a couple numbers off my wantlist. I would also be up for any errors I might come across. Oh, and also the MVP inserts weren't included in the set Dennis sent, so I'd also like to add all those (besides the Gwynn which I've got plenty copies of). I thought I could probably dig up a duplicate Bip Roberts base card, but alas, didn't find one (yet).

In the interest of making this post more interesting, I'll tackle this as a 3-way pack skirmish. Calling these "orange pack", "white pack", and "red pack". Which pack will shake out as the best?

The white pack gets on the board first with a puzzle piece I need! 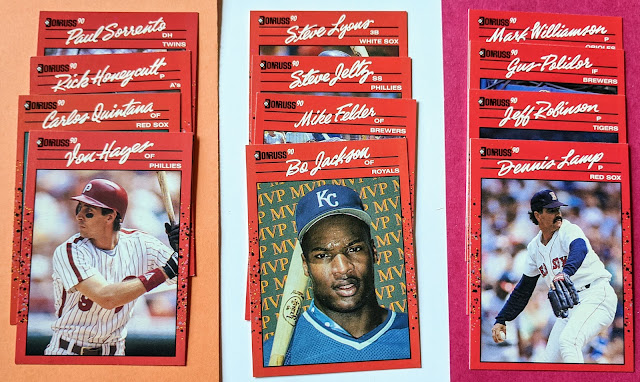 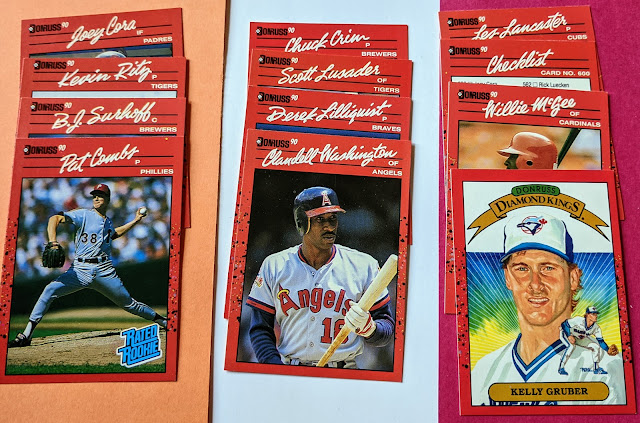 The orange pack flexes with a Rated Rookie, while the red pack boasts a Diamond King plus 2-time batting champ Willie McGee. 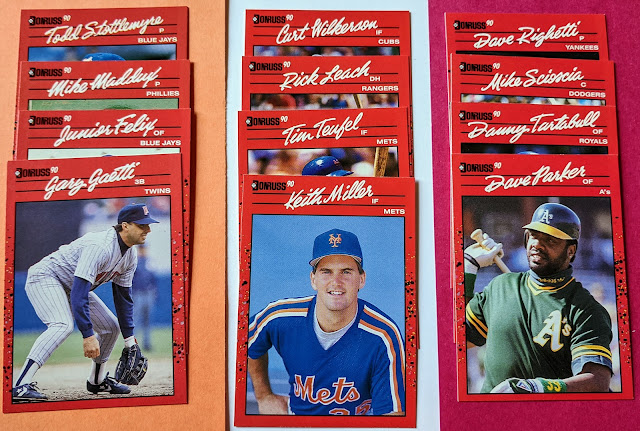 The red (right) pack is the most impressive of this bunch, with the Cobra leading a squad of all-star players. Still no base cards I need, however. 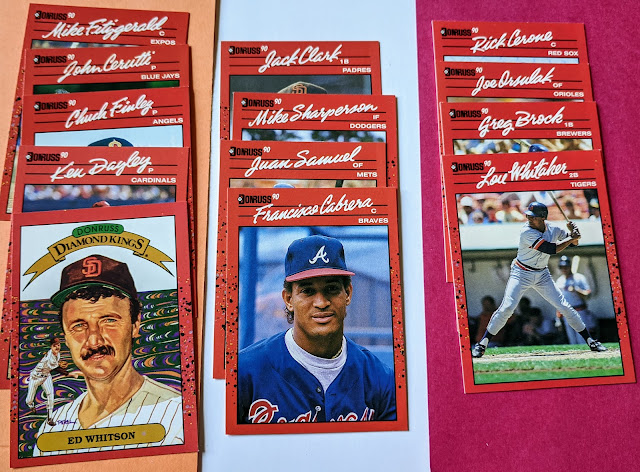 And the above bunch closes out the rip. The orange pack seems to have gifted me a bonus, 17th card. Cool, but nothing I need. 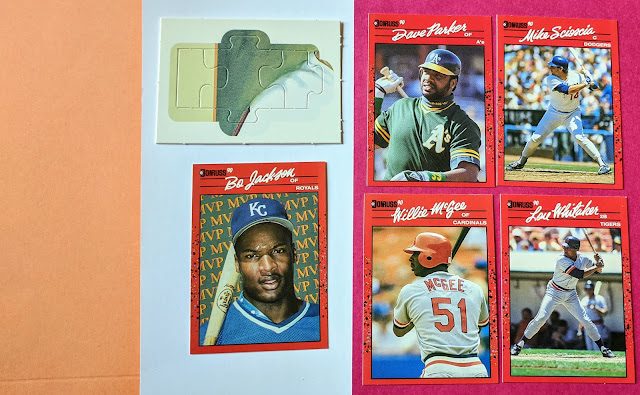 For my set, I checked off a puzzle piece need, plus got a Bo for the MVP inserts, both thanks to the white pack. Orange pack had nothing for me, but the red pack gave me a few other keepers. Dave Parker and Mike Scioscia are PC guys, while Willie McGee and Lou Whitaker are fringe guys in my collection that I don't officially PC (yet), but tend to hang onto when I get them. Another semi-interesting thing to mention about this cheap wax rip: the orange and white packs feature base cards with the period in the copyright (LEAF, INC.) while the red pack does not have the period after "INC" for any of the base cards (DK's still have a period). For my set, I don't care at all about this variation (nor the "paint splatter" variations on the front, I believe due to the factory set cards being slightly different), but I would count them as different cards in my PCs.

I just checked, I don't have either version of the Scioscia (can hardly even be considered a "PC" at only 7 cards.. hey, it's a very casual collection, and I collect him because he appeared on The Simpsons). With Dave Parker (PC consisting of about 60 cards), I only have the period version of his 90D in there, so the no-period version I just pulled is an addition.. sweet! 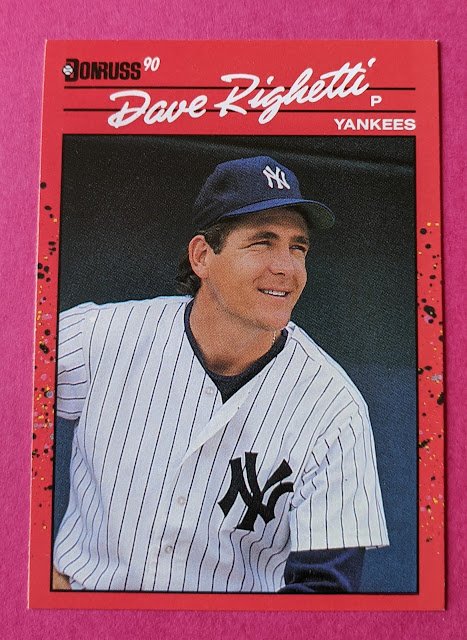 I'm thinking Dave Righetti might get the honor of representing 1990 Donruss in my "Frame of 1990".  I remember this card well from my early days as a collector. The optimistic smile with a knee up on the dugout steps.. simply a great image.

But maybe I'll end up going with something else.. perhaps a card I pulled myself back in 1990. We'll see! Stay tuned for a future post on it once I get that frame figured out.
Posted by defgav at 1:59 PM

Email ThisBlogThis!Share to TwitterShare to FacebookShare to Pinterest
Labels: pack rip, Pack Skirmish, The spirit of 1990 is alive in Portland