Finally back to work this week after being out of commision last week. Lots to catch up on, and January and February are looking like very busy months for me, so I'll likely be posting sporadically for the next few weeks. 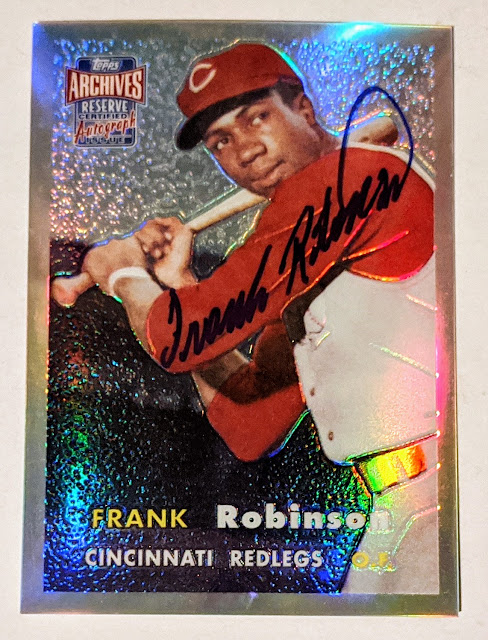 Ooh, that's a pretty card! I know some collectors take issue with the disconnect of refractor reprints of vintage cards, though they are A-OK in my book (evidenced by me being such a fan of Archives Reserve.. which is basically a product line of nothing but refractor reprints of old cards). 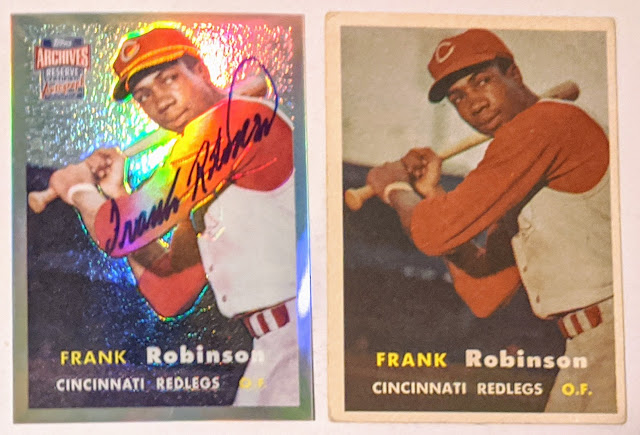 I picked up Frank Robinson's rookie card a couple years ago for my 1957 Topps setbuild. It's a great card, and I'm happy to now be able to complement that with a shiny, autographed version. Frank unfortunately left us last year at age 83. He was generous with his signature, so thankfully we collectors can score an auto of his without breaking the bank (this one ran me $36 shipped-- my first purchase of the new decade [cards or otherwise]). Not bad for a pack-certified, on-card signature of one of the greatest baseball players of all-time. And like most old-time greats, he clearly took pride in his penmanship. And I love that he wisely identified the sleeve as the best place to sign. I'll bet he signed this image countless times over the course of his life, whether the original '57 issue or the various reprints that followed. 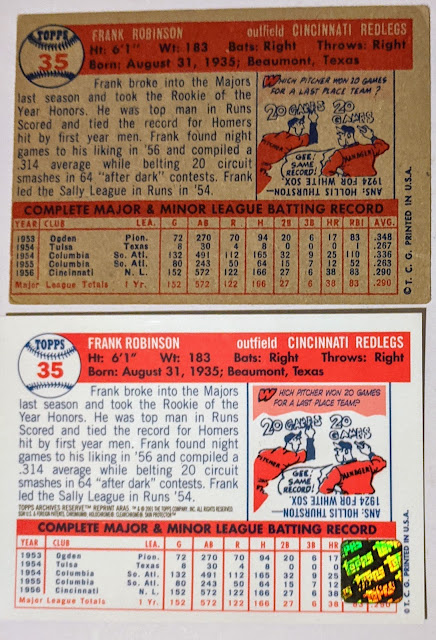 The backs. As someone who enjoys making custom cards, I'm no stranger to recreating old designs, both front and back, trying to get them looking as close to the real thing as possible. So like in the upper right here where on the original "Texas" is directly under "Throws".... but on the reprint "Texas" is well before "Throws"... stuff like that would bug me if I were the guy working it up. Not a big deal, but just something I noticed. (Also check out the text on the front, such as where the second "o" in Robinson is in relation to his pants.)

Frank had a big rookie season in 1956, unanimously running away with NL Rookie of the Year. Of course there was no Topps Update back then, so young Reds fans had to wait until 1957 to score one of his cards. If it happened in modern times, he'd have literally thousands of different "RC" cards flooding the market before the end of the year, and probably have an entire insert set dedicated to him the following year along with thousands more cards. Different times!

It's a long-term project, for sure, but I love adding a new Archives Reserve card here and there. I recently nearly burned a big eBay gift card I got for Christmas on a Johnny Unitas autograph-- that would have been a big one to check off of the football portion of the ARMS wantlist!-- but sadly some other dipshit bidder out there wanted it just a little bit more than I did. Oh well, maybe someday.
Posted by defgav at 3:35 PM