I love Larry Walker and am very happy he was elected to the Baseball Hall of Fame yesterday. I watched the announcement live on mlb.com at work-- FIRE ME; I DON'T CARE! (lol, j/k) I nearly chose a Larry Walker card for my wallet card this year, but I was afraid he'd just narrowly miss having enough votes, and then for the rest of the year, it'd bum me out to open my wallet and see him in there, reminding me of the travesty. But thankfully it all worked out. Higher career WAR than Jeter, btw, to those who don't think he's worthy.

I first started collecting in 1990 (as I've mentioned a lot recently, having decided to celebrate my 30 year anniversary as a collector this year). Felt like a great year for rookies. I had small PCs of my favorites and have some sentimental attachment to them still today. Some guys like Kevin Maas quickly fizzled out. Then you had guys like David Justice and Dean Palmer who went onto solid careers, but slowed down after a while. Larry Walker was one of the few guys I remember collecting as a rookie who just kept going and playing great. Seems like a cool guy, too. Easy to root for. Again, I'm glad he was eventually able to scratch his way into the Hall. And it's extra fitting for me that it happened while I'm looking back fondly on 1990. 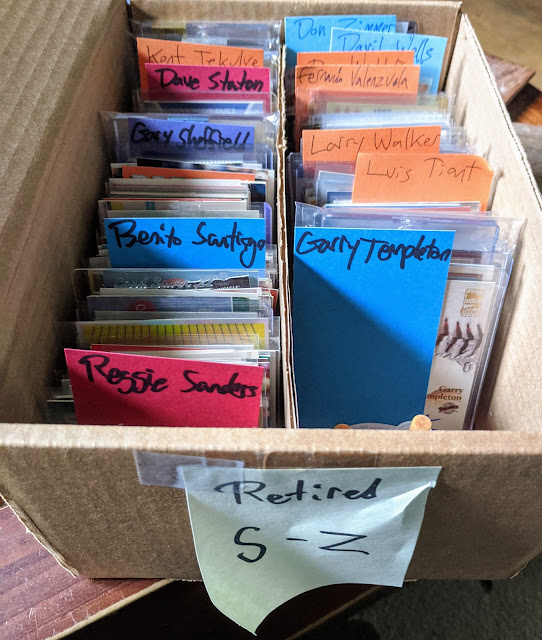 To give you a peek into my physical collection, my baseball player collections are typically broken into 3 sections: Active, Retired, and HOF. It's rewarding when I get to move somebody from the Retired section into the HOF section, especially after a long wait, as with Larry here. Hopefully some of these other guys like Luis Tiant join him before long.

My PCs are generally just stacks of cards thrown together, though occasionally I'll get around to sorting them out-- usually organizing the cards by year, and weeding out dupes. Let's celebrate the recent news by sorting out the Larry Walker PC and see what I got. 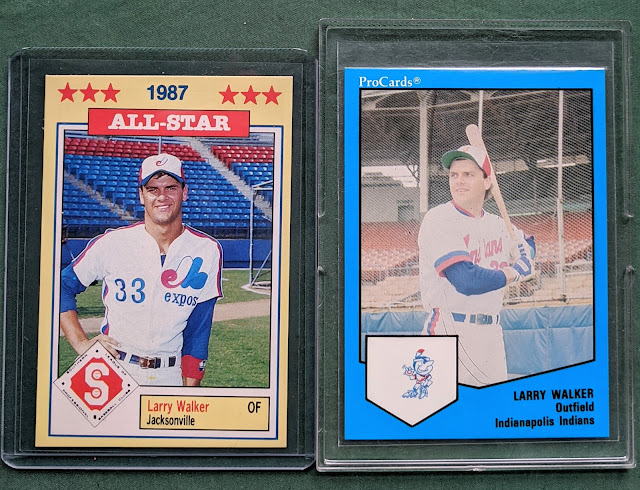 We start off with a pair of minor league cards. I think the '87 came in a trade a couple years ago. The blue card is a remnant of my childhood collection.. one of my most cherished cards back in the day. 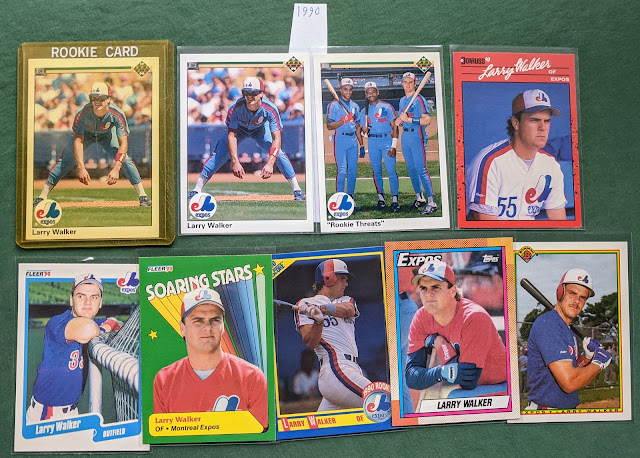 Speaking of "original collection" cards, the 90UD card in the yellowed top loader is another one. I suppose I kind of consider than an unofficial variation for me since I have another one here.
Looks like I've got a pretty good handle on his mainstream 1990 cards. Missing his great '90 Leaf rookie, though technically I do have one in my complete set. Same for his 1989 Topps Debut card.
I always thought his '90 Donruss card was funny looking.. Larry seems to be pouting that he wasn't awarded a Rated Rookie logo. "I'll show them for snubbing me. I'll play my way into the goddamn Hall of Fame!" lol
(His "Rookie Threats" teammates Delino DeShields and Marquis Grissom were both Rated Rookies in 1990, funny enough. I hope they get to attend the ceremony when Larry gets inducted.) 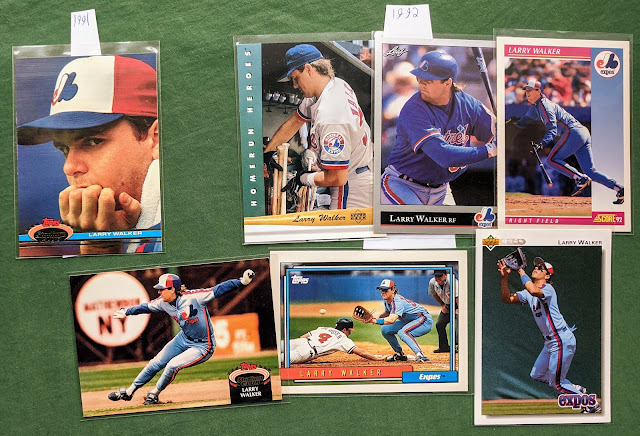 I was pretty shocked to discover I only have one lone card of his from 1991-- I'm sure I had plenty in my original collection, but must have jettisoned them when I slimmed down my possessions before I moved out of San Diego. (All you traders with lots of available overproduction-era cards taking up space.. hey, I need Larry Walker cards from 1991 besides Stadium Club!) 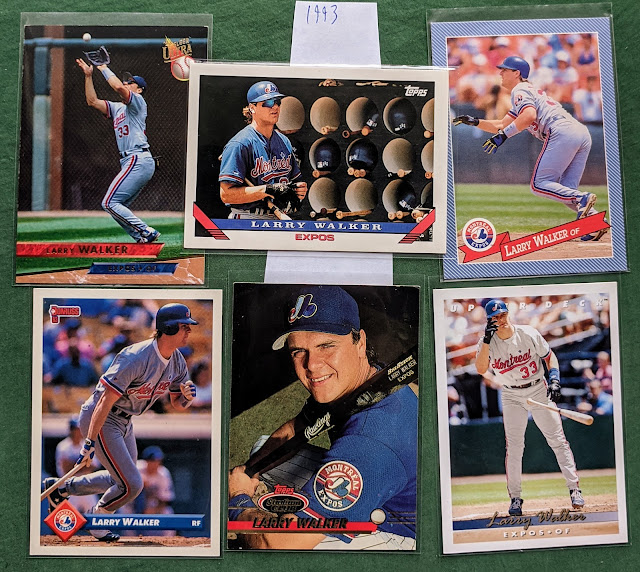 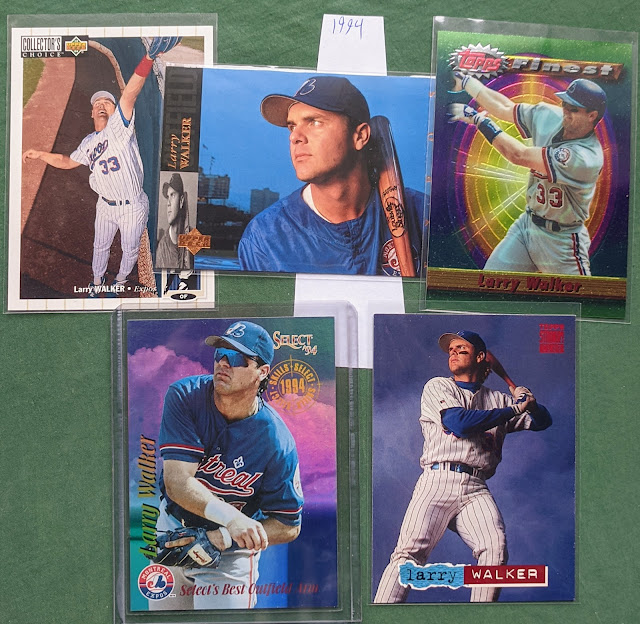 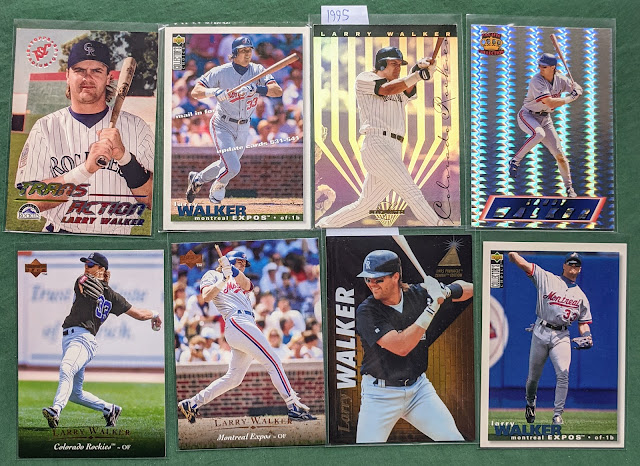 1995: the transition from Expos cards to Rockies cards. 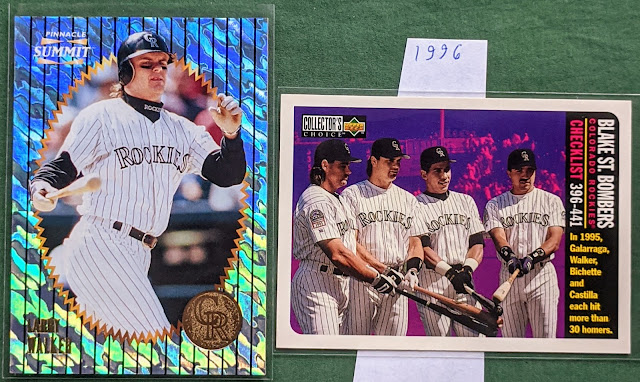 Not much from '96, but that Summit card is a beaut! 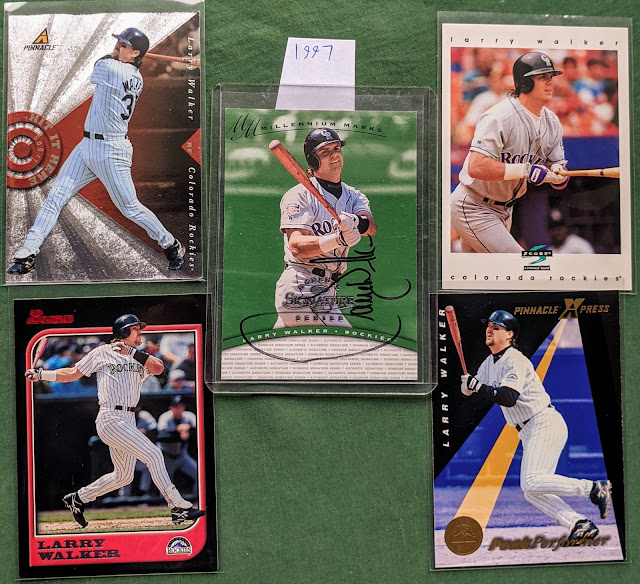 1997 includes my only Larry Walker autograph.. as wonderfully crazy as it is. I hope with his induction, we'll start seeing him show up on more autograph checklists. 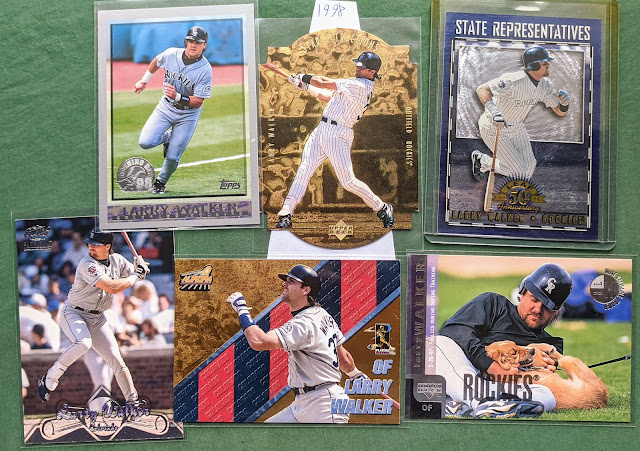 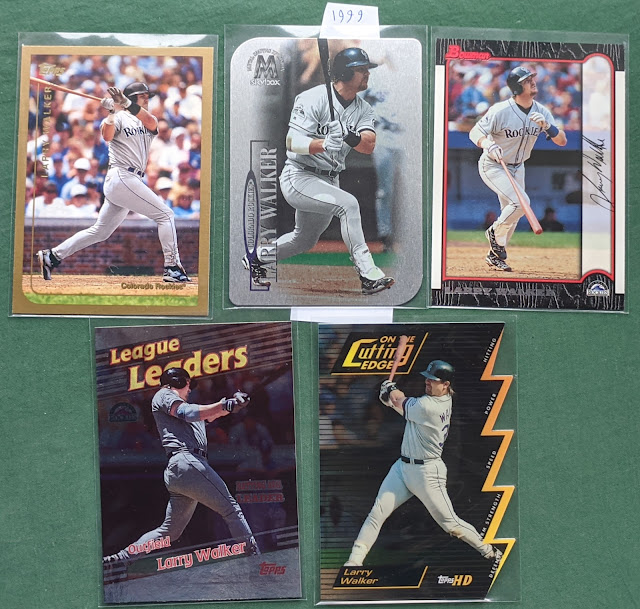 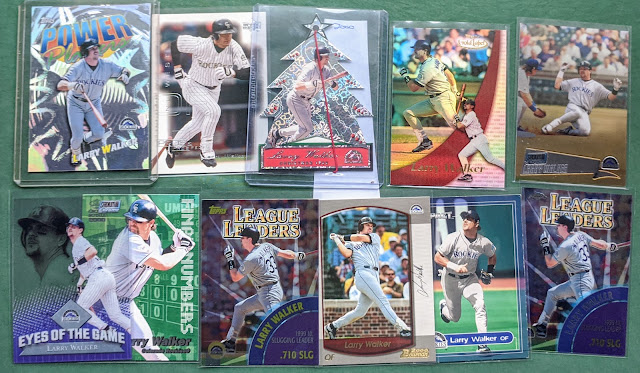 2000 seems to be my most plentiful year for Walker cards. The top left is an oversized proof card.. still need the standard issue. Might look like one of the League Leaders on the bottom is a dupe, but the one on the right is the Chrome version. 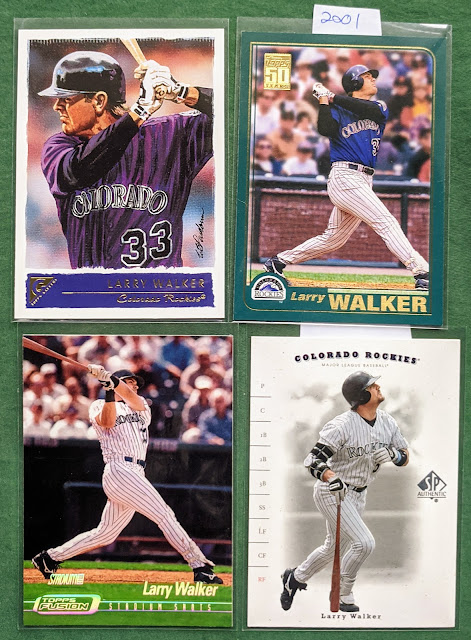 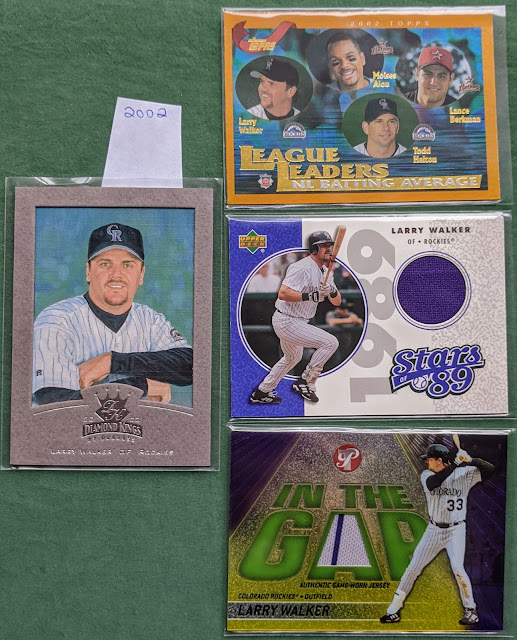 I only have two Larry Walker relic cards, and they're both from 2002, funny enough. 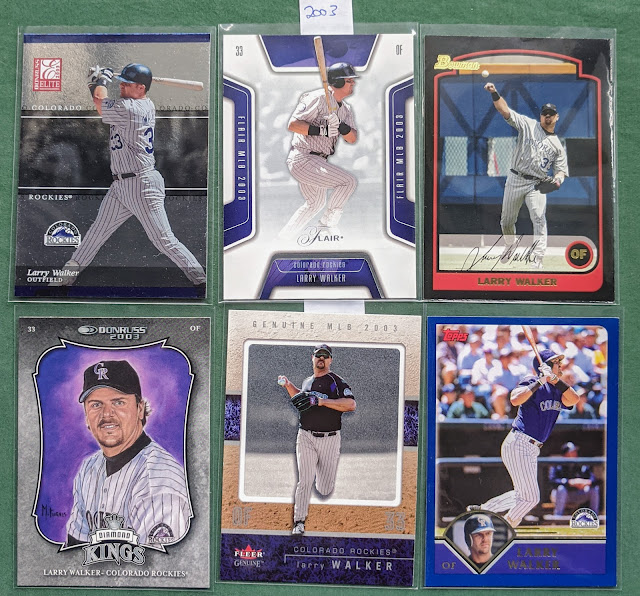 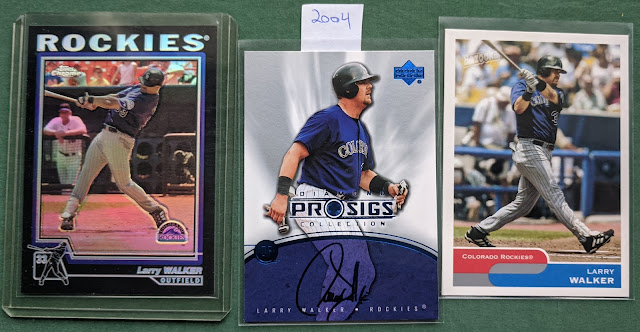 2004. That lovely black refractor is a dupe from my setbuild.

We wrap up with a pair of cards from his twilight in St. Louis. And it turns out the 2019 DK "Flashback" card I showed just yesterday is my first post-playing days Larry Walker card. Oh wait, I do also have a 2011 Topps legends variation diamond parallel in that setbuild.

Surprisingly I only had one dupe in the PC (2003 Topps)-- I typically end up with a decent stack of dupes when I sort my PCs, but not this time (--a pleasant change of pace).

And there you have it: my Larry Walker collection as it stood at the moment he was voted into the Hall of Fame. Now time to count these all up and see if I've hit my standard goal of 100 different cards. [...] Nope, looks like I'm at around 85 cards. Oh well, shouldn't be long till I'm able to hit triple digits. If you have any available Larry Walker cards not pictured here, I'd be down to receive them in trade. Thanks!
Posted by defgav at 3:03 PM

Email ThisBlogThis!Share to TwitterShare to FacebookShare to Pinterest
Labels: Larry Walker, Player Collection, The spirit of 1990 is alive in Portland