I bought a certified Lou Brock autograph the other day. I believe it's my first card from 2005 Topps Retired Signature Edition, my least-favorite of the three Topps Retired sets. I'm just not a big fan of that year's design.

Still, though, some of those cards in that set are pretty cool.. and sometimes interesting player / team selections, too.. Brock as a Cub? Ozzie as a Padre? Nice! So yeah, while my first love is 2004 Retired, and my second love is 2003 Retired, I'll occasionally check out the 2005 Retired selection available. 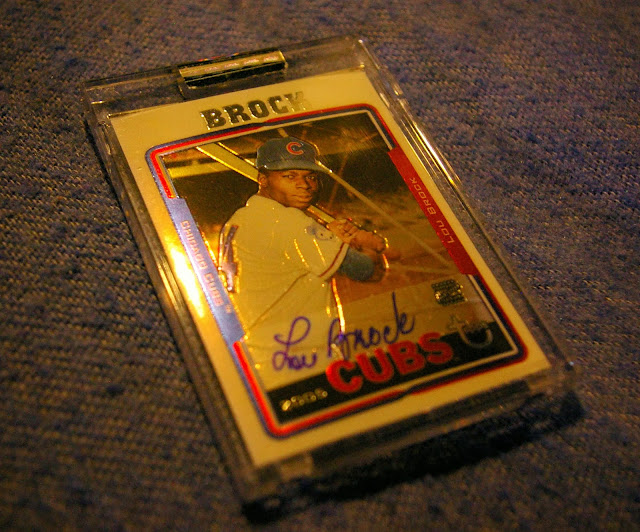 I love Lou Brock.. I was just talking about him on the blog a few days ago. I think a '79 Topps Lou Brock was the first card I ever got as a kid that was "a vintage card of a Hall of Famer" and so he's always had a sentimental place in my heart. Cherished that card! And so I was excited to add a reasonably-priced certified auto of his to my collection. And I love that it pictures him as a Cub even though he really had all of his accomplishments in St. Louis.. but we're all a little sick of the Cardinals these days, aren't we? 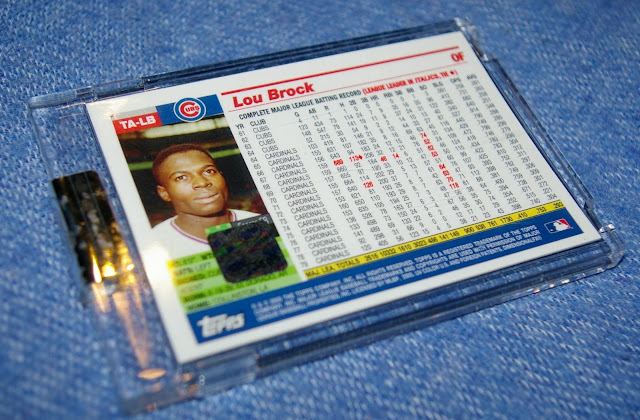 Anyways, a week went by that I bought it, with no card received or update from the eBay seller. Then he got in touch saying he was sorry but he forgot to send the card out with the previous week's mailing and he'd get it sent out soon. I was a little peeved, but not much, and I'm generally a pretty forgiving guy and wasn't really in any huge rush to get the card. I wrote back saying it was cool, but if he could throw in a little bonus card or something, that'd be sweet.

I hate when a seller just says "sorry." Say you're sorry by throwing in a bonus! That's how you do it. Rare occasions that I'm slow to get a package out, I'll usually throw in a little extra to make up for the wait. Gifts are a great way to get forgiveness. Or just throw in a bonus for the heck of it.. Always a great way to win someone over.

So anyways, I was hoping/expecting a little something.. perhaps a card of some guy who hasn't been selling lately.. maybe an unopened pack of junk.. something like that.

But no, the guy came through with a very pleasant surprise.. 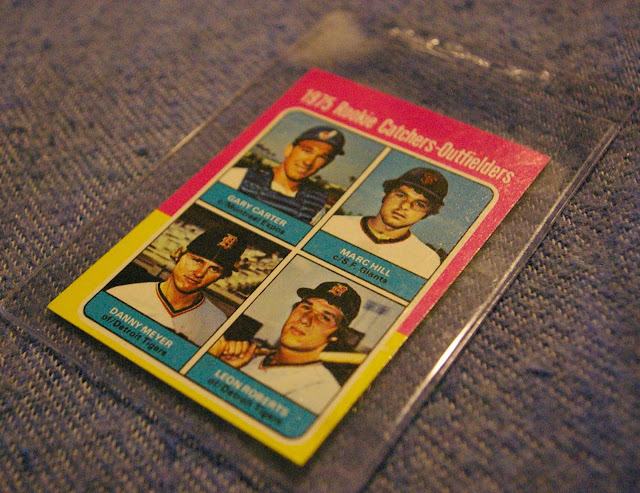 A Gary Carter rookie! I've wanted this card for a long time! Very happy to have it thrown in for me as a surprise bonus "sorry the card you bought took an extra week to arrive" gift! It's a bit miscut, but excellent condition otherwise. I'll take it!

btw... Hey Fuji, JediJeff, and Bo.. you guys won my contest last post. Reply with which glowing card you want and which card from the prize pool you want.. first come, first serve between you 3.. then email me your address. You've got until the end of the weekend to claim your winnings! Thanks!
Posted by defgav at 10:30 AM