I had some Listia credits burning a hole in my digital pocket, so obviously I'm going to spend that on cards. I splurged a few days ago and spent a big chunk of that on a lot of 350+ vintage-ish cards (1970-1982) for the rough equivalent of $15-25, though it's hard to really nail down a Listia credits-to-dollars ratio.

Some great stuff in there. I picked out a good portion of guys I like/collect to keep, some highlights of which I'll show off below. But there are probably about 250 cards that are essentially available for trades, etc. If any of you guys are trying to complete a Topps set or team set from 1970-1981 and still have some commons to check off your list, feel free to get in touch with a needs-list and I'll take a look and maybe we can work out a little trade (my wantlist). Elsewise, I'll likely throw some of them into my prize pool for future contests, and/or offer some PWE lots on Listia to make back some credits.

The only year I think I'll take off the table is 1973, as I'm still coyly considering the idea of deciding to try to complete that set someday. But that's a topic for a future post, I suppose.

Anyways, I think everyday this week I'll post a flatbed scanner-full of baseball cards from this lot I won. Seems like "low hanging fruit" for getting some posts out. (Work has been super busy lately, with somebody leaving and me picking up the slack, so I've had much less downtime for drafting up posts during the day.) These below cards are mostly ones I want to keep, though, not the trade bait unless noted. 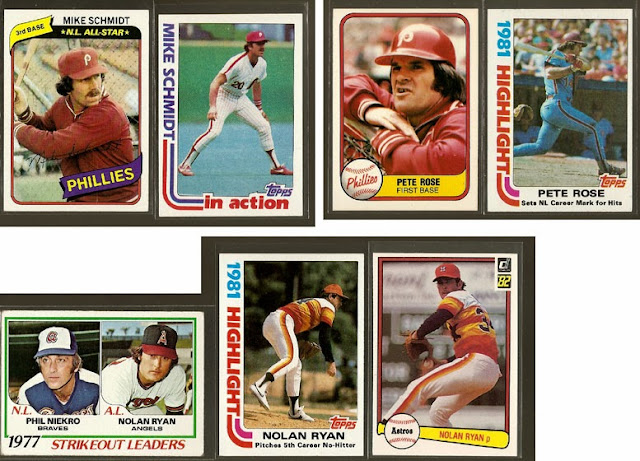 Some Schmidts, Roses, and Nolans. Some of these I think I already have, but will need to check/organize. Pretty sure I have the 2 "1981 Highlight" cards and the '80 Schmidy.. so I suppose those 3 are probably trade bait if anybody wants 'em.

I love the Ryan Express, but Phil Niekro on that LL card takes it from a very good card to a great card. The '82 Donruss Ryan was the only card in the lot to come in a top loader, so I'll take that as a tip that it might be the most valuable card in the lot.

Mike Schmidt is notorious for being a great player who got screwed with crappy cards. Not sure why Topps apparently hated him and always seemed to use boring photos for his cards. Even his "In Action" card isn't really action, but rather anticipation of action.