Some random old cards for Tuesday: Brock vs. Lonnie

Here are a few more highlights from the big vintage-y lot I got a few days ago. 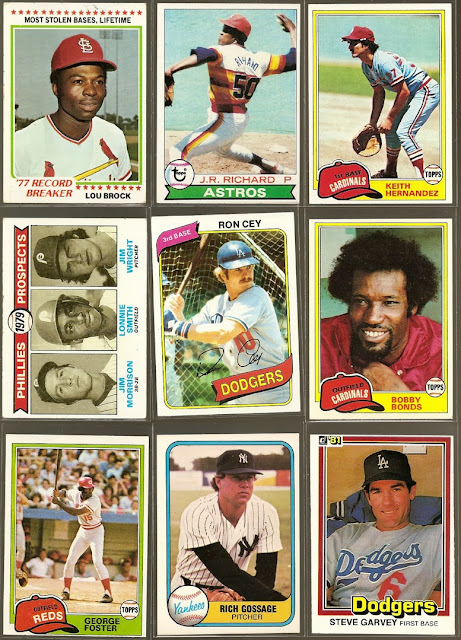 Love Lou Brock. Even if advanced metrics in recent years suggest he may be overrated (according to Hall of Stats, he falls well short of Hall-worthy.. wha?!), he was an exciting player and has some great cards (..though this Record Breaker might not be one of them.. a photo of Brock swiping that record-breaking base would've been infinitely better). And as a former high school sprinter, I have an affinity for speedsters.

J.R. Richard and Ron Cey are a couple guys that I didn't give time of day to when I was a younger collector, but since getting into reading baseball card blogs in recent years, my eyes have been opened to their greatness.

Keith Hernandez is a cool character I don't really have any older cards of. Till now, I guess!

Growing up watching plenty of Braves games on TBS in the early 90s, it's neat to finally have a Lonnie Smith rookie card. Hopping back to Hall of Stats, Lonnie Smith has an identical "Hall Score" to Lou Brock. Really?!? I like that site, but don't always agree with how the numbers shake out. No offense to Lonnie Smith, who was a fine ballplayer, but compared to Lou Brock? No contest!


As a casual Doors fan, it's cool to me that Jim Morrison shares Lonnie's rookie card. And please don't point out that this isn't the Lizard King himself.. just let me keep on pretending that Jim Morrison faked his death because he was sick of being a rockstar, and became a professional baseball player instead.

Remember when Barry Bonds eclipsed his father Bobby Bonds? Who would have guessed that Barry would later sink so far that Bobby would posthumously eclipse Barry back again.. at least in the hearts of baseball fans, not the recordbooks. Bobby has some great cards. This 81 Topps card catches him just waking up from a good dream, by the looks of it. "Ah man, you guys wouldn't believe it! I was riding a polkadotted unicorn through a syrup waterfall!"

George Foster, a recent Happy Card honoree, is always a welcome addition to my collection.

Goose looks funny here without his trademark mustache. Pretty sure I needed this for my PC.. he fits into my top tier collecting goal of "former Padres who are in the Hall".

Speaking of which, Garvey is hoping the Veteran's Committee adds him to that list one of these years, too. (Interesting read: Why Isn't Steve Garvey In The Hall Of Fame?)
Don't take this the wrong way, but Steve Garvey's 81 Donruss card here might be the "sexiest" baseball card until Score started putting out subsets of guys with their shirts off. Garvey's womanizing charm is hard to deny, even on baseball cards such as this one. You can just picture him seductively holding a glass of red wine out of frame. "Well, hello ladies."

Ok, that's it for today. Check back tomorrow and we'll take a look at 8 or 9 more cards.

BTW, notice I replenished the prize pool and gave it its own page in the sidebar. I'll get another contest going soon with another chance to win ya some cards.
Posted by defgav at 8:00 AM