The Greatest Gavins of All-Time

My name is Gavin.

Growing up, I was pretty much the only Gavin on earth. At least that's how it seemed. I never went to school with any other Gavins, or really ever came across another Gavin anywhere. Once every couple years I'd see somebody named Gavin in the credits of a movie or something, and my eyes would perk up: "He's named like my name!," as Homer Simpson would later eloquently identify.


There was Gavin MacLeod, the actor who played the captain on the Love Boat, but I think that was the only famous Gavin when I was a kid. Later, the 90s gave us Gavin Rossdale, lead singer of the band Bush (a Nirvana wannabe from England) who's since had a more-lasting legacy as Gwen Stefani's husband. And more recently, another musician, Gavin DeGraw has had some success, though I've never knowingly listened to his music (I think it would be categorized as "young adult contemporary").

According to Wikipedia, there are less than 40 notable Gavins ever to exist, as of this moment in history. And not many of those are American.

I always liked having a somewhat obscure name. Sure, it was harder to find novelty mini license plates and stuff with my name on them, but it was a small price to pay for being the only Gavin in town. Some people even thought my name was downright weird.. something they'd never heard before. One stupid bully called me "gavel" like that was an insult. Whatever. Another jerk called me "guava".. oh, so mean! (rolls eyes). And English-as-a-second-language folks often mispronounce it "GAY vin" (which comes out sounding like a subtle insult, though I'm pretty sure they don't mean anything by it), instead of correctly as in My name is Gavin; a good time is what I'm havin' (one of my go-to freestyle raps). On rare occasions, Gavin is used for a girl's name, but this is very much frowned upon.. in fact, googling its feminine usage, the first result was quite amusing in the outrage people had. Damn right. My to-be mother-in-law sometimes has trouble spelling my name, and I've been given Christmas gifts addressed to "Gaven", bless her heart. But these days, most people are at least familiar with the name. It's been a somewhat popular baby name for the past decade or so, meaning in the coming years there will likely be a bunch of Gavins out there making names for themselves (no pun intended).

Honestly, I've had a tendency to be a bit competitive and defensive about being Gavin. I would hate for somebody with my name to become really popular. You Mikes and Chris's out there probably don't get this. But imagine your name was Chipper. Then all of a sudden Chipper Jones bursts onto the scene and steals your name. Bad example since Chipper is a nickname, not a given name, but you get my point. Generally speaking, namesaked people don't like to be outshined by one person.

Reeling this post into the topic of baseball, the first Gavin to break into the majors was Gavin Floyd, getting called up in 2004. In fact, according to baseball-reference, through 2013, he's still the only Gavin ever to play in the bigs. He'll never be enshrined in Cooperstown, but I'd say he's a lock for the Hall of Fame For Guys Named Gavin, if such a place is ever built. Going back to my competitive nature, I'm kinda glad Mr. Floyd isn't a superstar. But since he's just a decent player, I will fully support him. I guess I collect him too, so please trade me your spare Gavin Floyd cards. I don't have many. I have one I got from a Mystery Binder (getting that card kind of planted the seed for this post), and then I just recently got a second card of him for 15 cents in my inaugural Just Commons order. While I was at it, I also added a card to my cart from each of the other Gavins I could find in stock.

Not easy to pick my favorite Bush song (they've got a few I like, but none I love).. went with this.

Now let's breakdown these ballplayers.. the All-Time Greatest Gavins. (Note that this list only includes guys I own cards of, so apologies to the lesser-known minor leaguers I haven't scored cards of yet.) For added fun, let's count them down in order from least-best to most-best. 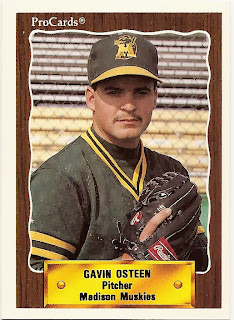 Osteen played from 1989 till 2002, with many years spent in AAA, but he was never able to break through to the show. He usually put up decent/average numbers and ended up with a very middle-of-the-road lifetime farm record of 78-79 with a 3.97 ERA. He has a few minor league cards out there (this one seems to be the most common.. I even owned it back in the early 90s.. my first Gavin), but as far as I can tell, Osteen never got on a major league card. He's got a write-up over at The Greatest 21 Days blog with more info on this career. 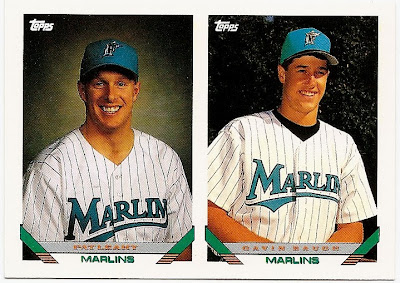 Baugh (on the right) only played professionally for 5 years, putting up disappointing numbers and never making it past A ball.. and we're talking about an expansion franchise here!-- early 90s Marlins-- so you know he really sucked. But hey, the guy somehow got on a major league baseball card! Not many people can say that! That's enough to bump him past Osteen, despite Osteen's much more respectable career. Baugh's last name is kinda close to mine, too, so he gets the award for "closest name to my name, any person living or dead, that I've ever heard of." If only Bill Buckner's first name was Gavin, he'd take the award. There's apparently never been a pro baseball player with my last name, btw. I'm guessing rookie card-mate Pat Leahy here didn't have much of a career either, since this card cost me just 12 cents. 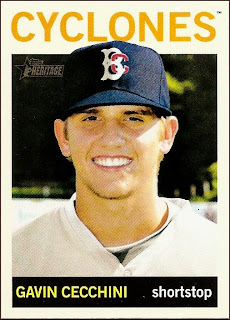 Cecchini wins the "Gavin most likely to succeed" award. He was the Mets' 1st pick (12th overall) in the 2012 amateur draft. He spent 2013 in the low minors, not exactly tearing it up, but doing ok. While his offensive numbers haven't been that impressive, as a shortstop, I suppose his meal ticket is defense. We'll have to wait and see if he ever amounts to anything. With a little luck, he could be challenging for the Greatest Gavin crown in a few years. Being a first round pick, he's already got lots of baseball cards, some of which are even pricey.. serial numbered and/or autographed, refractorized, what-have-you. This one was his cheapest available (65 cents), so I grabbed it.


And the #1 Greatest Gavin of All-Time, As Far As Professional Baseball Is Concerned:
Gavin Floyd 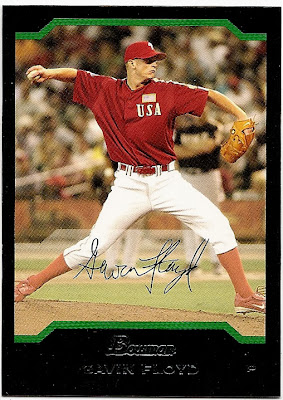 No surprise here, seeing as Floyd is the only Gavin to play major league baseball. The 4th overall pick in the ill-fated year of 2001, Floyd got called up to the Phillies 3 years later. After being traded to the White Sox with Gio Gonzalez for Freddy Garcia, he established himself as a solid backend-of-the-rotation starter in 2008, going 17-8 with an ERA of 3.84. He hasn't matched those stats since, but consistently put up roughly "league average" numbers for the next few years, with an occasional gem mixed in. An elbow injury led to a poor start to 2013, ultimately requiring Tommy John surgery that took him out for the year after just 5 starts, and will keep him off the mound for much-- possibly all-- of 2014. He's a free agent now, so we'll see if he's able to make a comeback or if his career is finished at 30. His lifetime record stands at an even 70-70 with a 4.48 ERA in 199 games.. Average numbers for a baseball player, but outstanding numbers for a guy named Gavin.


Honorable Mentions:
But really, when you do a card search for "Gavin", about 95% of the results are either of Floyd, Cecchini, or Escobar. So, one established guy and a couple recently drafted prospects (one MLB, one NFL). So in conclusion, it looks like for the foreseeable future, Gavin Floyd will reign atop the list of All-Time Sports Gavin Greats. Congrats, Gavin! And best of luck to all other Gavins out there!

Let me now invite you to leave a comment. Tell me about any other Gavins you know. And/or: Who is the best player who shares your name?
Posted by defgav at 8:00 AM