One Last Card is a new feature at Baseball Card Breakdown debuting right here, right now! Think of it as a companion piece to One True Rookie, another reoccurring series here. But instead of only one major card company putting out a rookie card for a particular player, these are instances where only one company put out a true final card for a guy. Some collectors poetically refer to these last cards as "sunset" cards or "finale" cards.

Some guidelines to being considered a "one last card" here:
- We're focused on the years 1981-1991, since before 1981, there was essentially only Topps, and by the early 90s there were too many various sets to really keep track of.
- We're not talking special "tribute" cards or any "post-career" cards. Only regular base cards issued the year after the player's final season. As such, the cards should feature full career stats on the back.

I like looking at how the yearly checklists for Topps, Donruss, and Fleer varied in the 80s. So posts like these identifying outliers are right up my alley. And I love final cards of great players. Flipping over a card and seeing complete career stats is just a very satisfying feeling!


While "One True Rookie" subjects are dominated by Donruss, expect to see Fleer reign supreme in "One Last Card" posts. Fleer was always comfortable with putting out a card for a guy even if he announced his retirement during/after the previous season. They didn't give a crap if he wasn't going to be active by the time their set came out. Perhaps it was a tip of the cap to a great player, or just adding another potential future Hall of Famer to bolster their checklist.

This was in stark contrast to Topps, a company so bent on putting out a "current" product that they would often butcher photographs with airbrushing jobs on their cards that looked straight out of a freshman art class, just to have a guy pictured in the team uniform that he switched to late in the year or during the offseason. And if a guy retired or was released the previous year, chances are he wouldn't be included in the Topps set. A lot of guys fell victim to this and never got their "farewell card". Dick Allen in an A's uniform? Didn't happen, according to Topps. Harmon Killebrew as a Royal? All in your imagination, apparently. I could go on for a while. A notable exception is Mickey Mantle's 1969 Topps card (he announced his retirement during spring training that year; He probably wouldn't have been included had he retired a bit sooner.) While I guess I see the point in trying to put out a set that matches up with opening day rosters, it can't help but feel like a snub when these greats get left out. It makes more sense to me that a baseball card set should be like documentation of what happened the previous year, not what's happening RIGHT NOW. But things being the way they are, it's somewhat rare for a flagship Topps card to feature complete career stats on the back. It's a big reason why I'm drawn to "oldies" sets like Topps Retired (2003-2005) and the retired players included in Topps Archives. Love the complete stats on the back!

While Topps' philosophy wasn't to look back on the previous year (special postseason or highlights subsets notwithstanding), Fleer definitely leaned that way when it came to their player selection, as we'll see with this "One Final Card" series. It's a bummer that Fleer wasn't around to put out farewell cards to those guys Topps ignored back in the 70s.

For this inaugural One Last Card post, we're starting at the start, with the first modern era Fleer set, 1981. When the courts ruled in early 1981 that Donruss and Fleer were legally allowed to put out baseball cards, the companies scrambled to put their product together. The cards featured basic designs and often unimpressive photography (Fleer the worse offender than Donruss). To fill out the sets, some star players were given multiple base cards (Reggie Jackson has 3 different 1981 Donruss base cards, for example). I suppose this isn't much different than Topps including separate "All-Star" or "In Action" cards. While Fleer wasn't above this (they put out 2 Reggies), they tended to stretch out their checklist a bit more. A prime example of this is the fact that they were the only one of the big 3 card companies to issue Willie McCovey a card in 1981.

McCovey's major league career began in 1959 when he broke in with San Francisco and won NL Rookie of the Year despite playing in only 52 games up top all season. His terrific .354 average that year would turn out to be a fluke, as he only cracked .300 once more in his career. Instead, he developed into a feared slugger, teaming with Willie Mays to give the Giants teams of the 60s a potent Willie-filled lineup. 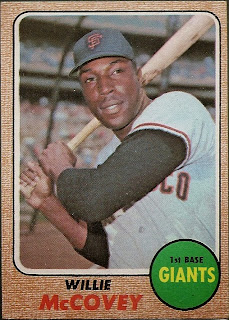 In likely his most remembered plate appearance, McCovey hit a rocket which was snagged by Bobby Richardson for the final out in the 1962 World Series with the Giants threatening in the 9th, giving the Yankees the championship. A shot at redemption in 1971, Stretch hit .429 with a couple homers in the NLCS, but San Francisco wasn't able to get past Roberto Clemente and the Pirates, who went on to win the Series that year. It would be his last postseason experience.


McCovey had an excellent 3-year peak from 1968-1970, leading the NL in SLG, OPS, and OPS+ three straight years. His numbers are even more impressive taking into consideration the lower offensive stats of the second deadball era of the late 60s. His best season was back in the summer of '69, when he won the MVP award thanks to 45 home runs, 126 RBI, and a .320 average. He was also MVP of the All-Star Game that year.

After his numbers started to decline in the early 70s, San Francisco traded McCovey to San Diego after the 1973 season. In nearly 3 years in the brown and yellow, he put up decent numbers (er, by Padres' standards), but a far cry from his prime years. Still, he was the first real superstar to suit up for San Diego, and ultimately became the first former Padre to be enshrined in Cooperstown. 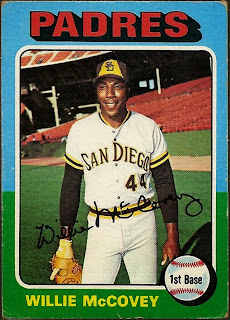 Oakland bought his contract for the '76 stretch run, but Willie couldn't adjust to the American League in those few weeks and mustered just 5 hits (all singles) in 11 games. After being released by the A's, the Giants invited him to spring training and he signed back with SF as a free agent (Topps airbrushed him into a familiar SF uniform for their 1977 set, so he was never featured on a baseball card as an Athletic, airbrushed or otherwise). 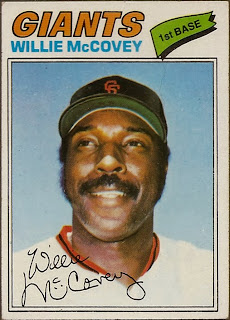 McCovey delivered a solid 1977 season, winning the NL Comeback Player of the Year Award, but it would be his last impressive year. He was able to reach the 500 home run milestone the next season, but his production was down. By the time the 1980 season rolled around, Willie was a bench player, but he entered the elite "Four Decades" club, having played major league baseball in the 50s, 60s, 70s, and 80s. In 48 games that year, he tacked a lone home run onto his career total before playing his final game at age 42 (The only other players to homer in 4 different decades are Ted Williams, Rickey Henderson, and Omar Vizquel). In that final game, the last game before the All-Star break, July 6, 1980, Willie hit a pinch-hit RBI sac fly off Rick Sutcliffe in a win over the Dodgers.

Retiring in the middle of the previous season, Topps stuck to their usual protocol and didn't give McCovey a card in their 1981 set. Donruss didn't bother including him in their inaugural set either. But luckily for true sunset card fans such as myself, Fleer included him in their 1981 set, giving collectors a chance to admire his complete career stats on the back. 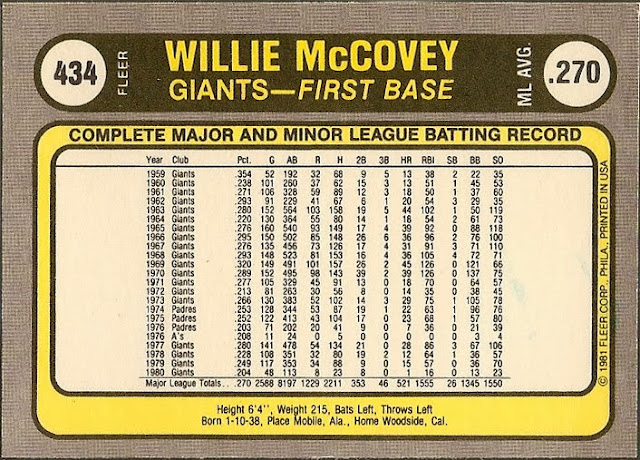 Pretty cool. Nowadays of course you've got sites like the excellent baseball-reference.com with extensive numbers at your fingertips (link to Willie's page), but back then it wasn't so easy. I suppose the card has an uncorrected error, since it claims to list McCovey's "Complete Major and Minor League Batting Record", though his minor league stats aren't actually included. (That would have made for some very tiny text!)

McCovey made the Hall of Fame on the first ballot. Among the impressive stats not included on the back of his one last card are his .374 on base percentage, .515 slugging percentage, and 18 grand slams. 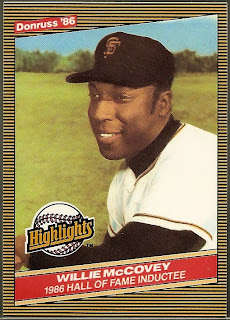 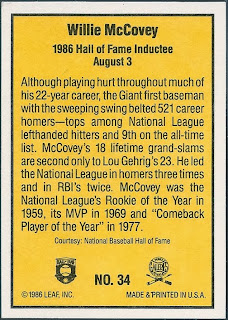 As far as later baseball card tributes, Donruss issued their first McCovey card in 1986, a "highlight" insert commemorating his HOF induction. As with most well-known modern era HOFers, he went on to be included in countless post-career sets/subsets/inserts in the 00s, though it seems like it took Topps a while to get on the bandwagon. 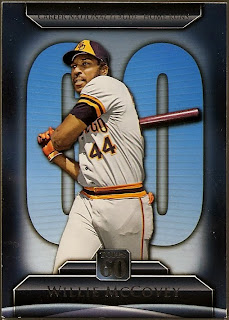 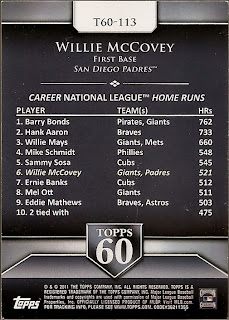 No doubt an incredible ballplayer. Were it not for nagging injuries throughout his career, and his managers platooning him for his first few years, it's easy to imagine him reaching the 600 HR mark, joining Aaron, Ruth, and Mays as the only pre-steroids era guys to hit that milestone. Still though, 521 is a heck of a number. Props to Fleer for putting out the final card of Willie McCovey's playing career.
Posted by defgav at 7:56 AM