When Brad's Blog randomly posted a picture of one of these "water cards" a couple weeks back, I was so smitten I had to jump on eBay and cheat on my card-buying shutdown.

This might be the most bizarre Refraction Action yet...

Yes, you're seeing that right.

This is a baseball card manufactured with sparkly  water  in the finished product. You know I love me some gimmicky 90s baseball cards (see my post on glow-in-the-dark cards), but these cards are so wonderfully over the top I can barely stand it! A baseball card you can take with you into the bath! Love it. Hang out with it poolside or perhaps bring it to the beach. It'll be fine! Rain? Flooding? Spill your drink on it? No problem! It's a water card!

To get technical, this is a 1998 Flair Showcase Wave of the Future insert, a standard-sized clear rubbery 12-card insert set. I wonder how long till the water in there eventually evaporates. These cards are 15 years old, and seem to have held up pretty well. I'd guesstimate another 15-20 years till they dry up, but we'll see. (The internet is telling me that's actually vegetable oil in there, not water, so it should stay moist for a long, long time. But "oil card" just doesn't sound as fun, so let's still pretend it's water.)

It'd be funny to send in one of these for grading. PSA would need to add a "liquidity" score or something.

It'd also be neat to get one of these autographed in person so you could see the "WTF" look on the guy's face.

Derrek Lee up there fits into my collection as notable former Padre. Derrek got traded away as a prospect after only a handful of games as a Friar (part of the deal to get Kevin Brown from the Marlins), but went on to a very fine career. He was a big part of Florida's World Championship team of 2003. His best year was 2005 with the Cubs when he won the batting title (.335), plus hit 46 HR with 107 RBI, and led the league in hits (199) and doubles (50). While his numbers were still decent in 2011, for whatever reason, nobody offered him a contract for 2012 and he found himself forced out of the game at age 36. Bummer; With a few more solid years, he may have compiled Hall-worthy stats. He finished with 331 homers and a .281 lifetime average, a solid ballplayer reminiscent of another popular Cub first baseman, Fred McGriff. 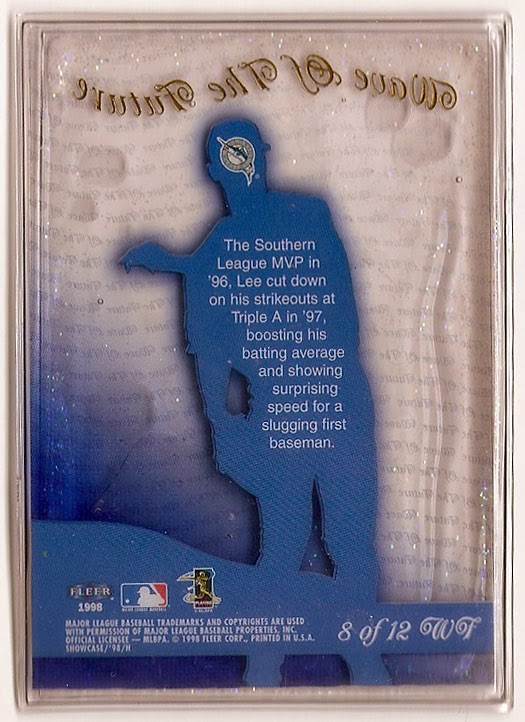 Finally your pet goldfish can start collecting baseball cards! Here's the watery checklist, thanks to baseballcardpedia.com:

Hey, if you'd like to add one of these damp cards to your collection for free, you're in luck because there's currently one (Rich Butler, a former Rays prospect who wiped out after 86 games in the bigs) in the prize pool of my current contest (ending 11/14/13), so go enter if you haven't already!
Posted by defgav at 4:23 PM