Here's an Xfractor (right? Who can keep track of the various parallel names?) of Casey Kelly from Chase the Sea Turtle, a.k.a. 2013 Topps (So help me god, 2014 Topps better not have the word "chase" printed on them anywhere.. and that includes Utley and Headley. They really drove the whole "chase/chasing" thing into the ground this year. And this comes from a guy who bought but a single solitary pack of the stuff.) I guess this card is from Topps Chrome, if you want to get technical.

The gif turned out pretty decent, I'd say.. Fun to stare at for a bit. That vortex behind Kelly's head on the right is especially hypnotic.

This refractor comes to you courtesy of J. Meeks at My Cardboard Habit. I'm not even talking about a trade.. he just generously offered some refractors he didn't have use for up for grabs on his blog to whoever wanted them. I called the Padres.. and since he only had one Pad (above), he even threw in a few Giants too. Nice, I'll take 'em! I very much appreciate the kind gesture. Everyone should check out his blog (though I'm sure anyone reading this already knows it well). He's trying to get a big 2013 Triple Threads group break going, so sign up if you're interested.
Thanks again, Judson!

As for Casey Kelly up there, his 2013 was lost to Tommy John surgery. Let's hope he's able to bounce back and give the Padres at least some value from when they gave traded away Adrian Gonzalez a few years back. 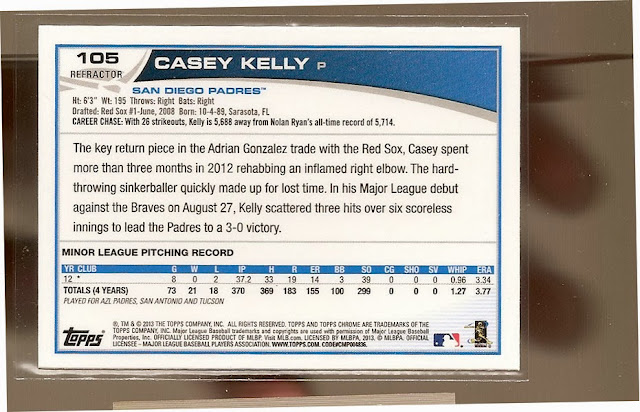 (p.s. I've decided to change the name of Refractin' Action to Refraction Action. It rhymes better. And man, oh, man, I loves me a good rhyme. All the time.)
Posted by defgav at 3:16 PM