Refraction Action is a regular feature here where I whip up a moving gif of a baseball card, usually a refractor (hence the name), but could also be any card that a still image can't quite do justice.

And in that latter category, I present to you my first attempt at capturing a Sportsflics card in action:

Here's Bill Madlock lacing one of his 2,008 career hits on his 1987 Sportsflics card. (BTW, only eleven men have won 4 or more batting titles. All are in the Hall of Fame except Mad Dog here.) You can look at the gif for a couple minutes and think, "Wow, he was really on fire that day! He must have a hundred hits and no sign of slowing down!" Watch long enough and you can probably have all his 2,008 lifetime hits covered.. or at least the 158 hits he got in 166 games as a Dodger near the end of his career. Is that Wrigley, with the brick wall behind him? I'm not great at identifying stadiums from pictures. The fact that the crowd seems to change makes me suspect these pictures might actually be taken from different at-bats.

Honestly, I never really liked liked Sportsflics or any other "lenticular" cards (is that what this technology is called?). They were expensive (to buy packs) but worthless (nobody wanted them). I only reluctantly added a Sportsflics card to my collection if it fell in my lap and featured a player I really collected. Otherwise, all they're really good for is scratching your fingernail on and pretending you're a funky DJ rapper scratching a vinyl record.

This particular lenticular composition above is the best type, though: 3 images from the same action.. Almost like a video clip. That's way better than cards like these that have just 2 images.. or 2 action images plus a headshot.. or the worst: images of 3 different players thrown arbitrarily onto the same Sportsflics card.

But give them some credit for trying something different, I guess, rather than the same ol' typical picture of a player on a piece of cardboard. But yeah, these don't do it for me, generally speaking. The first time you see one of these cards as a kid, you're impressed for a moment, but the novelty fades pretty quickly. Maybe if there was a Joe Morgan card featuring him at bat, and when you moved it, you saw his elbow flapping.. now that would be kinda cool. Or maybe a Kirk Gibson card where he pumps his fist after that big home run in '88. Some iconic movement like that. Maybe Rickey Henderson sliding into second? But most of these cards just feature a grainy-looking swing and sometimes a headshot. The backs were decent though (especially for 1987), featuring full-color and giving us a non-grainy look at the guy, plus full stats and a brief write-up. 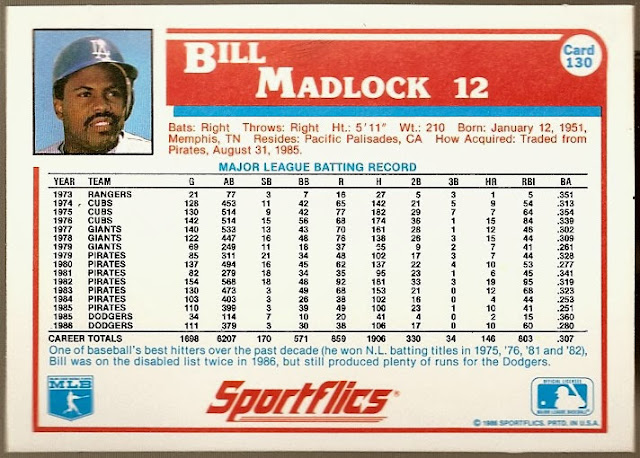